2022 NRL semi-finals preview: Can the Eels and Sharks avoid a straight-sets exit?

After week one of the finals, the Melbourne Storm and Sydney Roosters have had their premiership dreams dashed, while the Penrith Panthers and North Queensland Cowboys can sit back and relax this weekend after winning their respective qualifying finals against the Parramatta Eels and Cronulla-Sutherland Sharks.

For the Eels and Sharks, their second chances come this weekend when they face the Canberra Raiders and South Sydney Rabbitohs in their respective semi-finals this weekend, with no tomorrow for either side meaning it’s win or bust.

Both finals this weekend will be played in Sydney, with bumper crowds again expected as Sydney footy fans continue to get their finals footy fix after being starved of such opportunities last year due to the COVID-19 lockdown.

Here is your preview.

This season: Eels defeated Raiders 28-20 at GIO Stadium in round twelve.

Last meeting in a final: Never.

The Parramatta Eels will look to avoid a third straight-sets exit from the finals in six years when they face the Canberra Raiders in what will be the teams’ first ever finals clash at Commbank Stadium on Friday night.

Brad Arthur’s side were unfortunate to have had to face a Penrith Panthers side whose co-captain Nathan Cleary was making his return from a five-match suspension incurred from a dangerous throw charge in the teams’ round 20 meeting not long ago.

Try as they could, but the Eels struggled to contain the Blues halfback who produced several bombs and had a hand in each of his side’s four tries.

Though they briefly led 8-7 in the second half, that was as good as it got for them as they again suffered yet another qualifying final loss, leaving them to take the long road if they are to get back into a Grand Final for the first time since 2009.

Halfback Mitchell Moses has been named to play, though he may be in some doubt after being concussed from a head knock while in the process of making a tackle.

They face a tough task against the Raiders, who won their fifth straight match in Melbourne after ending the Storm’s season by the scoreline of 28-20 in the first elimination final at AAMI Park last Saturday night.

Ricky Stuart’s men showed no fear against the southerners, who were sentenced to their earliest finals defeat since 2014, as they continued their impressive second-half season surge after being as low as 14th after a heartbreaking golden point loss to the Warriors in round eight.

The Green Machine led 16-8 at half-time and while the Storm threatened a comeback, taking the lead by 20-16 midway through the second half, two late tries – one each to Hudson Young and Jordan Rapana – completed the upset win. 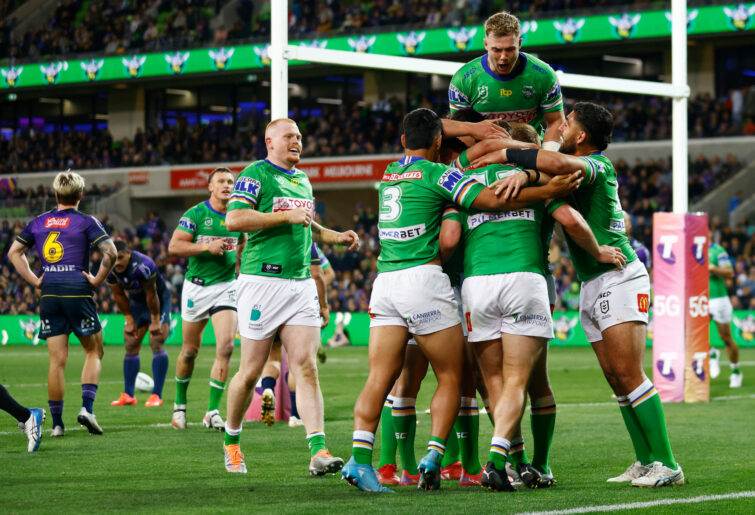 They will now back themselves in against what is expected to be a pro-Parramatta crowd which will be desperate as ever to avoid crashing out of September in straight sets, and continue their bid to become just the third team to reach the Grand Final from eighth place.

The last team to do this were the Cowboys in 2017, while the Eels also made the decider from eighth place in 2009 after being as low as 14th following the State of Origin period.

While the Eels will have the full support of the crowd, I think the Raiders have it in them to spring another finals stunner and send the blue-and-golds crashing out, thus extending their premiership drought – the longest by any club excluding the Titans and Warriors – to 36 years.

For the winner: A trip to Townsville to face the Cowboys in the second preliminary final at Queensland Country Bank Stadium next Friday night.

For the loser: Season over.

This season: Sharks defeated Rabbitohs 21-20 in round twenty at PointsBet Stadium.

Last meeting in a final: Sharks defeated Rabbitohs 28-12 in the second elimination final at the old Allianz Stadium.

The Cronulla-Sutherland Sharks’ heartbreaking golden point loss to the North Queensland Cowboys has sent them to the Panthers’ side of the finals draw, meaning if they beat the Rabbitohs this weekend, we will have a 1 vs 2 preliminary final on September 24.

The two teams could not be separated at half-time, full-time or the end of extra time, meaning an indefinite period of golden point was played out during which ex-Shark Valentine Holmes potted over a two-point field goal to sink the side with whom he won the 2016 title.

Now, the men from the Shire must take the long way around but will fancy themselves against the South Sydney Rabbitohs who are coming off a rather controversial 30-14 win over the Sydney Roosters, ending their bitter rivals’ season in stunning fashion at Allianz Stadium. 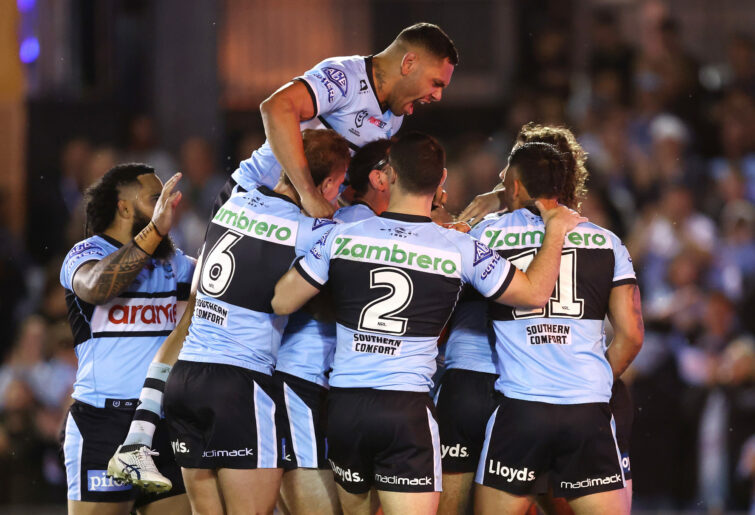 The result came just nine days after they suffered a 26-16 loss to the same team at the same venue, but you could argue this result was made even sweeter given the intense hatred and rivalry between the two traditional clubs.

After being booed heavily by Roosters fans in that said round 25 match, Latrell Mitchell had the last laugh, scoring one try, and will be their x-factor as they look to continue their finals run at the expense of a Sharks side which has been much-improved this season.

The last time the two sides met in a final was at the (old) Allianz Stadium in 2015, in which the Sharks, which had finished last the previous season, put an end to the Bunnies’ title defence with a 28-12 win, masterminded by the since-retired Michael Ennis.

Seven years on, the Sharks will again look to end the Bunnies’ season at the new Allianz Stadium this Saturday night, with the winner to progress to a preliminary final showdown against reigning premiers the Panthers at Accor Stadium.

With this semi-final kicking off at 8:00pm, it will allow Sydney sporting fans to be at the stadium in time for kick-off, roughly half an hour following the final siren of the AFL preliminary final between the Sydney Swans and Collingwood next door at the SCG.

It therefore promises to be the biggest night of footy at the Moore Park precinct since 2018, when the Roosters and Sharks played each other in an NRL final at the old Allianz Stadium following an AFL elimination derby between the Swans and GWS Giants.

For the winner: A showdown against the Penrith Panthers in the preliminary final at Accor Stadium. If the Rabbitohs win, it will be a Grand Final rematch.

For the loser: Season over.