2022 US Open Day 9 recap: No Aussies left as Casper Ruud, Alcaraz close in on No.1 ranking

Australian involvement in both the men’s and women’s singles draws are over, with Nick Kyrgios and Ajla Tomljanovic both bowing out of the US Open after contrastingly frustrating quarter-final defeats on Day 9.

Forty-eight hours after sending defending champion Daniil Medvedev crashing out of the tournament, Kyrgios battled through a five-set epic against Karen Khachanov, going down just after 1am local time.

Kyrgios then called for a trainer to receive some treatment on an apparent calf and knee injury, and when he returned he did so a different player as he broke in the third game of the second set, holding the advantage all the way to taking it 6-4, and levelling the match at a set all.

The Canberran had the chance to break to start the third set, but Khachanov would hold his nerve, again breaking late to claim it 7-5 but not before missing a simple forehand shot in the 10th game.

The fourth set was as tense as it could get as Kyrgios twice successfully held his serve to stay in the match, dominating the subsequent tiebreaker 7-3 to force a one-set shootout after midnight.

Khachanov broke in the opening game of the decider and while Kyrgios had his chances to break right back, the Russian held his advantage all the way to the end, claiming the final set 6-4 to advance to the final four at a Major for the first time. 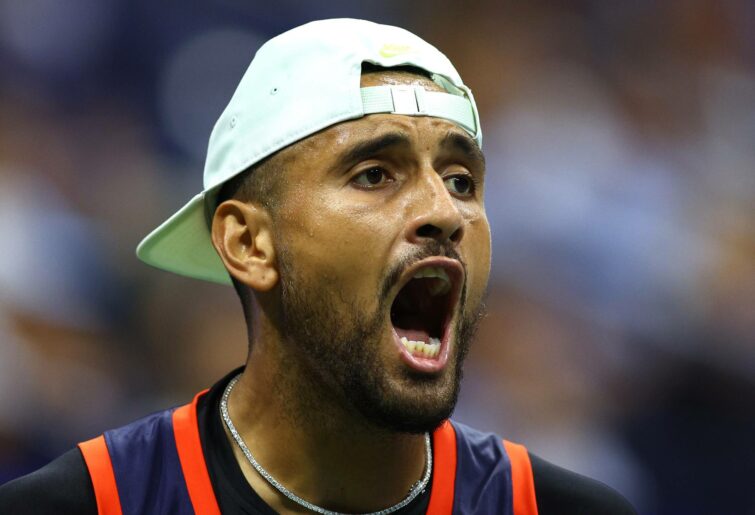 The win also avenged his heartbreaking five-set loss to the Australian in the third round of the 2020 Australian Open – the pair’s previous meeting prior to their US Open engagement. The other time they met was in a controversial encounter at Cincinnati in 2019, won on that occasion by the Russian.

In the semi-final Khachanov will face fifth seed Casper Ruud, who put paid to Matteo Berrettini’s hopes of a maiden Major title with a straight-sets win, the result ensuring he remains in the hunt to become world No.1 when the rankings are updated on Monday.

The Norwegian, who is coached by his father Christian, a former professional, dominated from the outset, dropping just five games across the first two sets, before the Italian 13th seed put up more of a fight in the third, taking it to a tiebreak which Ruud would win 7-4.

The semi-final clash between Khachanov and Ruud will be their second career meeting, after the latter claimed a victory at the 2020 Rome Masters, and their first at a Major.

Ruud will be seeking to reach his second Major final this year, after being on the receiving end of a Rafael Nadal clay court lesson at Roland Garros back in June.

In the women’s draw, the last remaining Australian – and the lowest-ranked player left in the draw – Ajla Tomljanovic, fell to fifth seed Ons Jabeur in straight sets, putting to an end her best-ever run at Flushing Meadows.

It was not as straight-forward as Jabeur expected it to be, though she claimed the opening set 6-4, she fell behind 3-5 in the second as Tomljanovic threatened to send the match into a deciding set.

However, the Wimbledon finalist managed to break back at the death, forcing a tiebreak which she would dominate, thus completing a straight-sets victory and advancing to the final four, where she will face fellow first-time semi-finalist Caroline Garcia.

Garcia shattered the hopes of local favourite and 12th seed Coco Gauff with a straight-sets victory, but unlike Jabeur for whom this is her second straight Major semi-final, this will be the first time the French veteran plays in the final four at a Major.

She is hoping to become the first Frenchwoman to reach the US Open final since Mary Pierce in 2005, and the first woman from her country to win a Major title since Marion Bartoli saluted at Wimbledon nearly a decade ago.

The men’s and women’s semi-finals will be completed this morning (AEST), with former world No.1 Karolina Pliskova squaring off against Aryna Sabalenka in the afternoon, followed by Andrey Rublev taking on Rafael Nadal’s conqueror, Frances Tiafoe.

The last remaining American woman in the draw, Jessica Pegula, will carry the hopes of a nation into her quarter-final against world number one Iga Swiatek, before young guns Carlos Alcaraz and Jannik Sinner face off later in the evening.

Matches to watch on Day 10

How Important Is Business Insurance When You’re Just Starting Out?