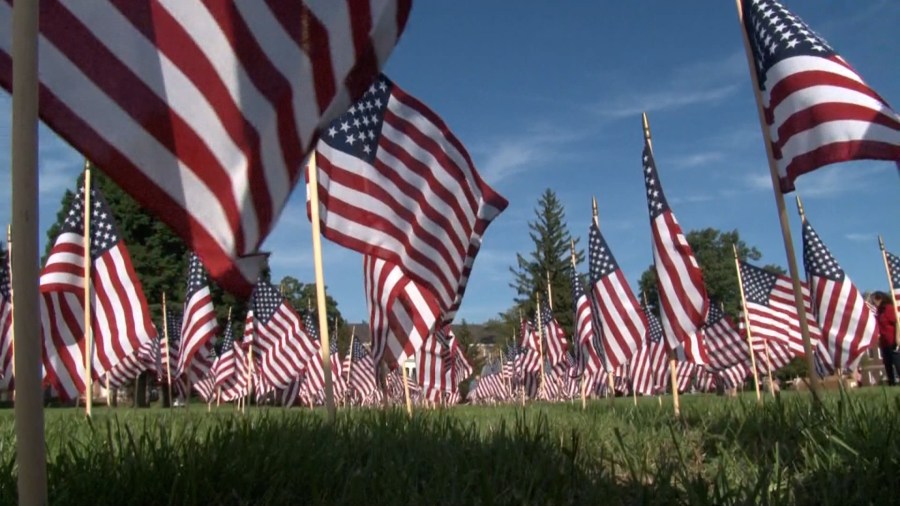 “9/11 isn’t the holiday where you go blow off fireworks and celebrate,” said Nick Lamarca, a Volunteer Service Officer. “It’s supposed to be a somber observance and I really think this kind of captures that.”

On Saturday, 25 volunteers help place the flags in the ground, prior to the 21st anniversary of the attacks on September 11th.

“I am a veteran so this does my heart a lot of good to see this,” said John McCune, a US Army Veteran who visited the site. “I was out here last year and I think it’s a fantastic idea. I believe that our country needs to get back to the way of unity. We need to be unified as a country again, I’m so hopeful for the future.”

While the flags stand to honor the fallen victims, they also symbolize the freedom that soldiers over seas fought for.

“The price of freedom is visible here,” said Terry McGuire, Public Affairs Officer, VAWNY Health. “This is kind of a tribute to them and we’re going to do this with impetuosity, going forward the 2,977 victims that we recognize on 9/11.”

Thousands of lives were stolen from our nation that day, including the hundreds of first responders who took a step forward to help and made the ultimate sacrifice.

On Saturday in Cheektowaga, local community members and first responders around Western New York put one foot in front of the other to honor the heroes lost in the attacks, in the 6th annual “Tunnel to Tower” 5K race.

“This is all about remembering and those lives tragically lost. We can’t forget,” said Jennifer Hermann, Co-Race Director, Tunnel to Towers 5K. “We just can’t forget what happened and we have to thank all of those first responders that go out every single day and they put their lives on the line for us.”

Whether they suited up in 60 pounds of gear, ran or walked to the finish line, over 600 participants raised money for charities created to help the families of fallen first responders, people who have illnesses from 9/11 and veterans who went over seas to defend the nation.

“The Tunnel to Towers gives back to all the firefighters, first responders, military veterans–thanking them for what they do for us,” said Hermann. “All the money that we raise here for this 5K event goes back to all of them.”

With every step taken, these local initiatives help us remember the ones we lost, keeping their legacy living on.

“We’re supporting our brothers and sisters,” said Heather Powers, a firefighter who participated in the 5k. “It definitely showed how tough it was to do what they did on 9/11.”

For more information on the “Tunnel to Towers” organization, head to their website here. If you would like to donate towards Saturday’s goal of $20,000, visit here.