For over a hundred years, Essendon and Carlton have been bitter rivals in the VFL/AFL.

They are the league’s two most successful clubs with sixteen flags each, and matches between the pair are always highly anticipated regardless of where they are on the ladder, whether it’d be in the top two (round 20, 2000) or bottom two (round 16, 2006).

There have been several memorable matches between the pair, including the 1993 Grand Final in which the Baby Bombers caused a major upset, and the 1999 preliminary final in which the Blues caused an even bigger upset to prevent an almost-certain Essendon flag.

A 2006 clash between the two sides, who occupied the bottom two places on the ladder at the time, ended in a thrilling 105-all draw, the first of three tied contests between the pair this century, with draws also occurring in 2011 and 2014.

But come Sunday and a brand new chapter in the rivalry between the two clubs will be written when they face each other in the AFL Women’s competition for the very first time.

While Carlton has been in the league right from the very start, Essendon are only just getting started and with that in mind, the Blues will be hoping to show the Bombers just who’s boss.

The Dons will be buzzing after defeating Hawthorn by 26 points in its AFLW debut match, with 2020 best-and-fairest winner Maddy Prespakis making an impressive debut for her new club with 26 disposals and six clearances.

The fierce rivalry between the Bombers and Hawks was there for all to see when the two sides traded blows on quarter-time, though it was not as violent as the infamous “Line in the Sand” brawl between their two men’s sides in 2004.

There are high expectations for Natalie Wood’s side this season, the club’s VFLW side having completed an undefeated season in the lead-up to their AFLW debut during the winter; of the four new sides, they are widely expected to be the best-performed.

Though unlikely, a premiership in their inaugural season would also bring some joy to the club’s long-suffering fans who have not seen their men’s side claim a flag since the glory days of 2000, nor win a final since 2004.

Carlton, meantime, were no match for Collingwood in its season opener as they could only muster exactly half of what the Pies scored over the four quarters, the result seeing them sit in 15th place on the ladder with a percentage of 50 after round one.

Much has been said about recent dramas at Princes Park, which has seen star players such as Tayla Harris, Maddy Prespakis and Georgia Gee depart the club in search of success at other clubs. 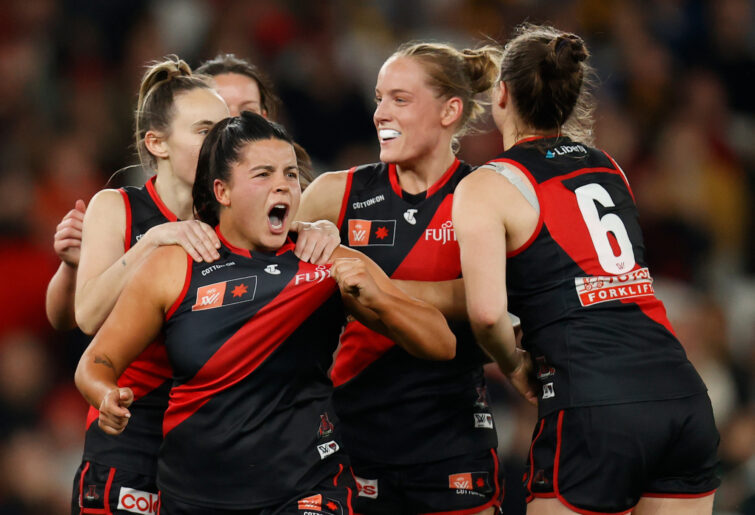 Madison Prespakis of the Bombers celebrates a goal with teammates. (Photo by Michael Willson/AFL Photos via Getty Images)

Which is why the presence of the latter two in the red and black is set to not sit well with Blues fans who will be out in force to make their feelings towards the pair known at Port Melbourne Oval this Sunday.

Prespakis’ defection to the Bombers at the end of last season was the biggest move by any individual (or individuals) from Princes Park to Windy Hill since Scott Camporeale switched from navy blue to red-and-black at the end of the 2005 season.

But unlike Camporeale who would endure a difficult two years at Essendon, Prespakis, who grew up a mad Bombers supporter and was born exactly two months after they won their most recent AFL flag in 2000, seems destined to rediscover her best form this season.

Since being drafted by the Blues as the number one draft pick in 2018, the 21-year-old had been a shining light for the club, which rose from wooden spooners that year to surprise Grand Finalists the following year, before crashing to only four wins last season.

She won the AFLW Rising Star award in 2019 before backing it up by winning the competition’s most prestigious award, the AFLW Best and Fairest Player award, just twelve months later.

If the Essendon vs Hawthorn match last Saturday night was anything to go by, then there stands to be high anticipation as the Bombers and Blues face off in the AFL Women’s competition for the first time, with a packed crowd expected for the match at North Port Oval in Melbourne’s south.

Though the women’s sides have over 150 years of history to make up on their men’s counterparts, it still stands to be one of the must-watch matches of round two, as the Bombers look to continue making an early impression in this competition.

This is one of three matches in which the newest clubs face foundation clubs, with Port Adelaide hosting the Western Bulldogs on Saturday and the Sydney Swans tackling Collingwood at Victoria Park on Sunday.