The Friday game between Geelong and Brisbane was a disappointing one-sided affair that would have only appealed to Geelong supporters and given them great hope that the premiership drought that started in 2011 (after Chris Scott’s first year at the helm) will finally be broken.

With a comfortable lead at half-time (which would have been greater if Tom Hawkins hadn’t missed easy goals), the Cats put the result beyond doubt with a dominant third quarter. The two clubs had only played each other twice in finals with the previous results being 50/50.

Jeremy Cameron was held to a single goal, but that was enough for him to draw level on Geelong’s goals list with tough ruckman Bill Kuhlken, who topped the Geelong goal kicking in his first year (1930), and 1931 premiership captain Ed Baker, a left foot rover who also played for Carlton, Collingwood and Footscray.

Games-wise, on the AFL list, Joel Selwood played his 354th game to remain in 18th place on the all-time list with (now) only Scott Pendlebury ahead of him on the current top 100 AFL game players list. 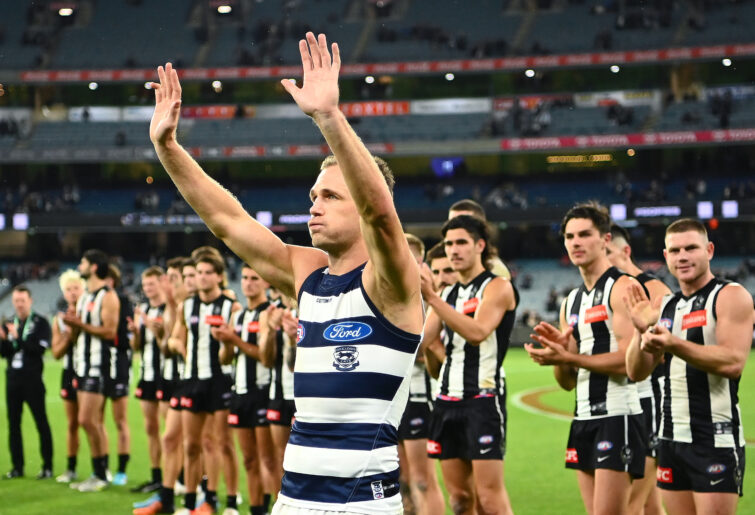 The Saturday game was another finals thriller with the now expected Magpie charge at the end falling one point short of the Swans total. A small number of umpiring decisions may have been enough to alter the result, but congratulations to all involved.

Lance Franklin put in an impressive cameo in which he kicked two goals to take him to equal third on the Swans all-time goals list, equal with Barry Hall, but the star of the match was Collingwood’s Jack Crisp. In an outstanding effort in his 200th game Crisp was easily the best player on the field, adding his 53rd goal for Collingwood to the mix.

I wrote an earlier article on Crisp, nominating him as the “greatest steak knife deal of all time” because he was a last-minute trade offer from Brisbane to secure the services of Dayne Beams. In all, Crisp played 18 games for Brisbane over three years, but his last six games (and only six games for 2014) were the final six rounds of the year.

The next year he started at Collingwood in Round 1 and has now played an amazing 189 consecutive games and sits in equal eighth position with Hawthorn’s Andrew Collins in the longest streaks of all time.

It rained goals at various times of the game, and in the end there were 11 individual goal scorers for both teams.

Steele Sidebottom kicked an impressive goal that earned him bragging rights over captain Scott Pendlebury as the second-highest current goal scorer at the club. Will Hoskin-Elliott kicked the first goal for the Magpies, and one other which enabled him to match Michael Richardson who, after four years at the Magpies, played one season at Essendon before finishing his career at Brisbane Bears.

Despite heartbreaking loss, there’s still reasons for Wallabies fans to be optimistic