Wallabies skipper Michael Hooper is expecting England to step up their forward intensity with the Test series on the line in Brisbane on Saturday night.

The Wallabies’ 30-28 win in Perth last Saturday came at significant cost with Allan Alaalatoa among those ruled out for this one, but with seven new faces in the 23, Hooper said his team would be able to adjust to the wholesale changes.

Hooper faced the media at Suncorp Stadium on Friday and talked about the areas of focus for the team, what a series win would mean and the return of local favourite Taniela Tupou.

On how Australia performed in the collision battle last week

“We were okay. Like any Test match, we want to improve that now,” said Hooper. “We said last week after the game, the expectation for us was we need to get better and want to get better. We know we know the English are going to be a lot better in that area.

“In terms of actions, it’s about where we’re looking to tackle, the intensity that you tackle, starting with our defensive line, the integrity of that. If you have a good integrity in your line it allows you to be clear on making the tackle and then it’s just about an intent thing – executing that.”

Hooper acknowledged that the team had to be on guard to stay out of trouble after Swain’s two match ban for a headbutt on Jonny Hill in Perth.

“We’ve got to focus on what we can control,” said Hooper. “We’ve got plenty of roles that are on the field in transitions and everything like that so we can’t be getting sucked into that.

“It’s part of the game and being smart around how you come out on top of that is important. It’s always a factor and dealing with it in the right ways is going to be a challenge but a good one.”

On the return of Taniela Tupou

Tupou returns after a long term calf injury, and on Thursday admitted he hadn’t missed the game at all. It was a clear sign he needed a break, and last week his first child, son Nela, was born.

“We know what he can deliver as a player and in terms of personality he’s great,” said Hooper.

“He’s really excited to be playing rugby and lacing up this week. He’s obviously a vibrant personality. So that brings in an instant energy and then on the field, he can do some really great things and has done at this stadium before as well.”

Hooper, who has had periods out of the game as well after a sabbatical in Japan last year, expects Tupou to be refreshed.

“He’s been able to fix his body,” Hooper said.

“He’s had a few big things happen to him in a personal aspect. Rugby is so amazing, you’re moving, week to week, all the time. So for him to be able to, reset…

“He’s had a kid in this time which is amazing for him and us as a Wallaby team as well. He’s been able to really appreciate that stuff and now switch his focus back and get on with footy.”

Tupou is the team’s practical joker.

“I hope he doesn’t lose that child in him. The energy he brings is fantastic,” Hooper said.

The skipper met Tupou’s baby in camp on Friday.

“I don’t know what I expected. I thought he would be just as big as Nela already but he’s actually small and a little cutie.”

Tupou faces a tough assignment against England veteran Ellis Genge on Saturday, and it’s a clash Hooper is looking forward to taking in from close proximity.

“It’s probably a good matchup. In rugby you don’t get a lot of head-to-heads so it is a really unique matchup in terms of front rowers actually coming up against each other. On the side of it it’s going to be exciting to see. They’re both quality players, and how they work against each other is going to be interesting.’’

On Jordan Petaia at No.15

Petaia has also battled injuries in his quest to become a regular Wallabies starter. Injuries to Tom Banks and Andrew Kellway have given him a shot at the fullback role he covets.

“That’s been the big one, hasn’t it? Getting his body right so he can put back-to-back performances together,” said Hooper.

“Physically, he’s outstanding. And when he’s on fire, you know, he’s got the height and the jump. He’s quite a rangey mover, which makes him really difficult to tackle. 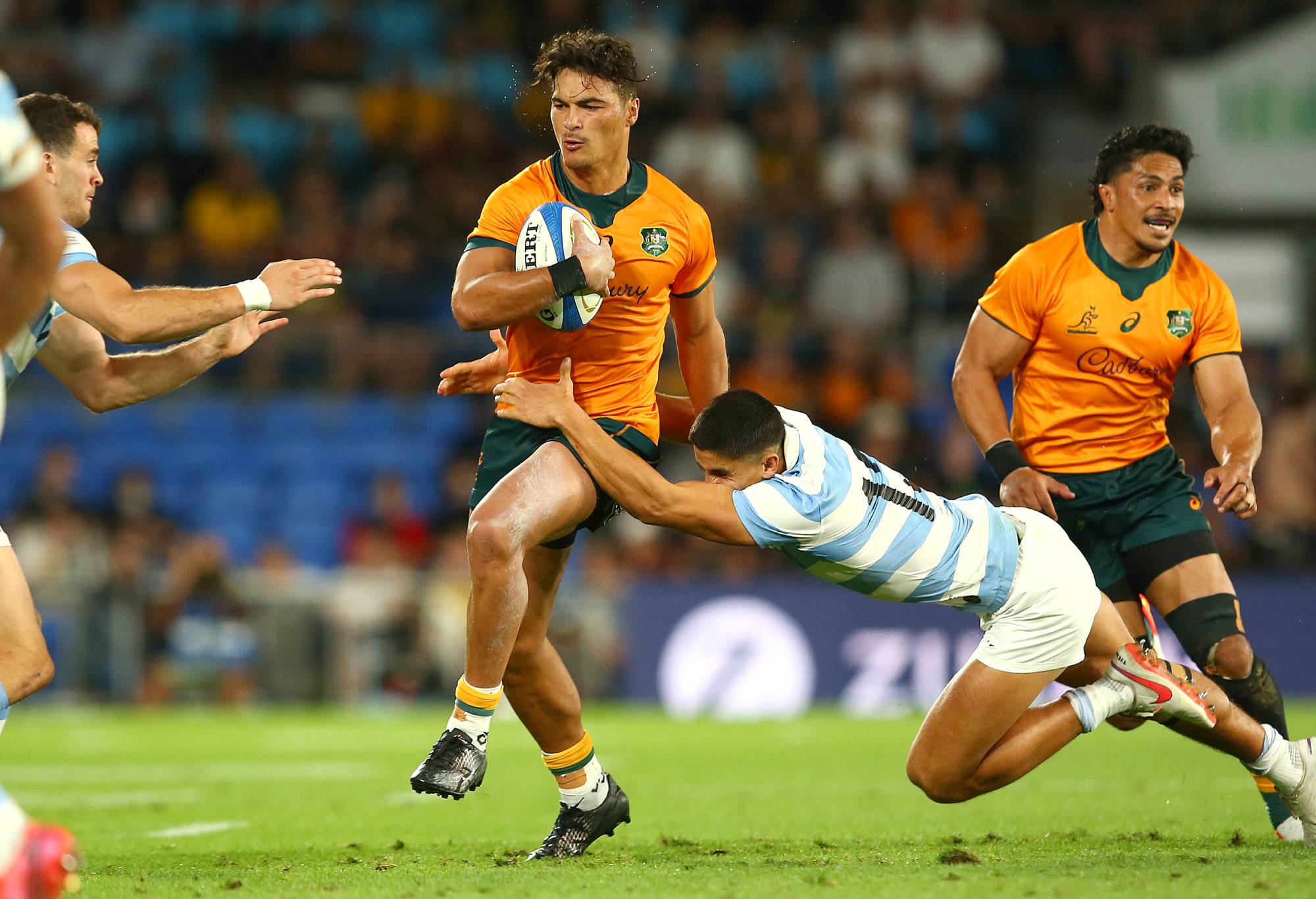 “He’s got a turn of pace and then he’s got all the tricks in the toolkit as well. He’s a complete package, it’s just staying on the park.

“Some of the best things you can do as a rugby player is just getting time under the belt on the paddock. He’s starting to do that. So with that he’s going to go from strength to strength.”

On Noah Lolesio stepping up

Hooper said Lolesio was great last week, especially considering the circumstances of his late call up, when Quade Cooper was injured in the warm up.

“He’s got high expectations for himself. And he wants to live up to those and that’s what’s exciting,” said Hooper. “He’s very self-driven. So you know, he’s one of those players that you let go and do your thing. I’m excited for him to grow on his game tomorrow and see where he can take it.”

On the effect of changes in the squad

Dave Rennie said after the 14-man first test win that the team had done a lot of work on scenarios playing short. Hooper revealed that they had also worked through many different combinations, which made them confident they could adapt with personnel changes.

“We had a little block two or three weeks beforehand. And we changed a lot of teams,” said Hooper.

“It wasn’t like we came in on day one and there was a starting team. There was a lot of rotation in that time.

“So the combinations that we’ve had, changing throughout, have actually shown up at our training a fair bit so that’s been really comforting for us, and the players that we’re bringing are top quality as well. It’s actually a struggle to pick who will come in and replace because there’s a lot of talent there ready to use.”

On the set-piece battle

“We expect every Test match to bring a level of intensity around set-piece and the forwards battle,” Hooper said.

“So much of that allows your backs to attack well, defend better and get easy exits out of your own zone or into the opposition zone. We need to be really on with our set-piece and get around that physicality battle.”

On ending the streak and potentially winning the series

“There were a few things that didn’t go to plan last week that we had to work our way out of, and we managed to do that.

“We’re doing some really good things but we saw last week as there’s plenty of examples to get better. So that’s been a lot of the focus this week.  The need to get better and want to get better as well.”

He said a series win in game two would be “be pleasing for us as a group.

“We’ve talked about where we want to go. And within that is starting to win games consistently. In terms of talking about what we’re wanting to do, it would be a step towards that.”

Mac Studio FAQ: Everything you need to know