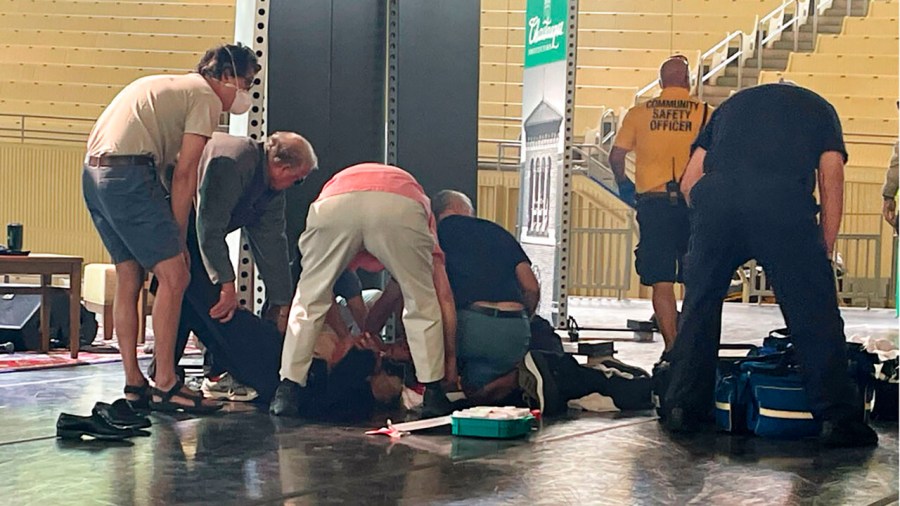 CHAUTAUQUA, N.Y. (WIVB) — A suspect is in custody after author Salman Rushdie was attacked Friday morning on-stage at the Chautauqua Institution and airlifted.

At 11 a.m., Rushdie, the author of “Satanic Verses,” was about to be interviewed when someone charged the amphitheater stage and apparently stabbed the 75-year-old in the neck, New York State Police said.

The author was rushed to an “area hospital” by helicopter, his condition is unknown.

The interviewer was also attacked and suffered a minor head injury.

The suspect in the attack was taken into custody by an NYS Tropper assigned to the event.

A spokesperson for the Chautauqua Institution said they’re coordinating with law enforcement and are working to get more information on the attack.

“Chautauqua Institution is currently coordinating with law enforcement and emergency officials on a public response following today’s attack of Salman Rushdie on the Chautauqua Amphitheater stage,” Jordan Steves, director of strategic communications, Chautauqua Institution. “We will provide more details as we know them.”

NYS Governor Kathy Hochul thanked State Police for their response and offered her thoughts for Rushdie and his loved ones.

“Thank you to the swift response of @nyspolice & first responders following today’s attack of author Salman Rushdie,” Hochul said. “Our thoughts are with Salman & his loved ones following this horrific event. I have directed State Police to further assist however needed in the investigation.”

This is a breaking news story, check back for updates.

Should I Sell My Cryptocurrency?