Melbourne coach Craig Bellamy is determined not to heap added pressure on Cameron Munster ahead of the NRL finals as the in-demand playmaker weighs up a multimillion-dollar call on his future.

The Storm can sew up a top-four finish with victory over the Sydney Roosters on Friday night or six days later against Parramatta.

But the tough fixtures against finals-bound rivals come with ongoing speculation around Munster lingering over the Storm’s latest premiership push.

The Queensland State of Origin representative has been strongly linked with a move to the Dolphins when his contract expires at the end of next season.

Storm coach Bellamy insists he won’t get heavily involved, with finals on the horizon.

“I’ve had a couple of chats with him and I don’t want to put any pressure on him, especially now we’re getting to the business end of the year,” Bellamy told reporters on Thursday.

“He’ll make a decision on what’s best for him.

“Obviously for me that decision is staying here, but he’ll have to make his mind up on that.

“He’s been an immense part of our club for a fair while now so hopefully he sees himself fit to stay.”

Bellamy insists Munster’s contract saga is not a distraction for Melbourne, who are on a four-game winning streak and put 60 points on the board against Brisbane last week.

“For us for planning for the year after next we’d like that decision to come, but at the end of the day I don’t see it has to be in too big a rush,” Bellamy said.

“We just want him to be playing the best footy he can at this time of the year, just like every other player.

“I don’t want to put any pressure on him about stuff that’s not concerned with actual footy on the field.”

The Storm-Roosters blockbuster serves as a regular-season AAMI Park farewell to Melbourne stalwarts Jesse and Kenny Bromwich, Felise Kaufusi and Brandon Smith, who will all depart at the end of the campaign.

“I don’t know about the other players and people at the club but to me it was a bit of a sledgehammer this week,” Bellamy said.

“It leaves a bit of a hole for us in terms of experience and leadership with those guys going but that’s the way it is.

“They’re doing what is best for their family and no one begrudges them that, especially after what they’ve done for our club.”

Kaufusi returns to Melbourne’s starting line-up against the sixth-placed Roosters after two games out following the death of his father.

Former rugby league enforcer James Graham is glad Wests Tigers captain James Tamou is free to play what could potentially be his final NRL game, but his sentence reduction could set a bad precedence.

“I’m happy that James Tamou is going to get the opportunity to play his final NRL game, and that not be his last moment. Assuming of course he does retire or move on to perhaps Super League,” said Graham on his weekly podcast ‘The Bye Round’.

“Now it reeks of inconsistency though, doesn’t it? When you look at the Brandon Smith incident, three or four weeks he got for his outburst, some people might like Brandon Smith and think he’s a great bloke. But yeah, it’s just inconsistent. 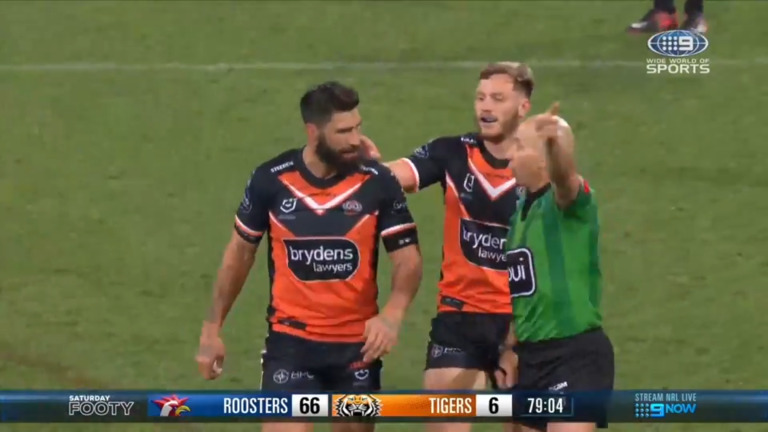 “And I have to feel that the time of the year, and the round that we’re in, and the situation has played a huge part in this. It doesn’t take Columbo to figure that one out.

“It’s a massive can of worms that has been opened, and is it just for variable interactions with the referee, or are they going to do it for other things as well? Any decision that they make is always going to be put under scrutiny, and I think this just adds more pressure to them.”

You can listen to the entire podcast here:

Josh Schuster has pulled out of Samoa’s World Cup campaign to concentrate on regaining peak fitness in the off-season at Manly.

The second-rower has been dogged by ankle and calf injuries this season, which have restricted him to just 11 matches with the Sea Eagles while he also missed their clash with the Roosters last month as he was one of the seven players involved in the controversial pride jersey boycott.

Nine reporter Danny Weidler has reported Schuster told Samoan officials he would not be available.

Schuster was a five-eighth in his junior days but has bulked up in the past few seasons while being used in the second row by Des Hasler.

With veteran Kieran Foran heading to the Gold Coast next season, the No.6 jersey is vacant and Schuster will need to be much fitter if he wants to be in contention for the playmaker role alongside Daly Cherry-Evans.

Schuster is one of the most passionate Samoan players in the NRL – he shed tears before the clash with the Cook Islands in June which his team won 42-12 at Campbelltown.

Pangai was the only Bulldog dropped after last week’s hefty NRL loss to Parramatta, with the former Brisbane and Penrith player set to appear in the NSW Cup rather than face Cronulla on Saturday night. Fringe first-grader Chris Patolo will replace him in the side to face the in-form Sharks.

Questions about attitude dogged Pangai during his time at the Broncos, especially after he incurred “multiple” infractions of the NRL’s COVID-19 protocols in August 2020. But those inside the Bulldogs’ system say such criticism would be off the mark.

“I know Tevita pretty well now and he’s one of the hardest trainers we’ve got here,” second-rower Joe Stimson told reporters. “(Being dropped) is a little setback, and I know he’ll bounce back really well. I won’t be surprised if he really puts on a show in the NSW Cup this week.”

Having spent time out of the first-grade side himself this year, Stimson said being dropped often served as a wake-up call. “You definitely feel frustrated playing reserve grade,” he said, “(but) it really puts everything into perspective. It gives you extra motivation to play really well, to get back into the first grade team where you want to be.”

The Bulldogs’ loss to the Eels was Pangai’s first game back after taking personal leave to attend the birth of his son. Pangai played in the Bulldogs’ round 21 loss in Bundaberg before flying to Brisbane for the birth and then returning to Sydney.

“He’s had a rough couple of weeks travelling,” winger Josh Addo-Carr said. “As everyone knows, travelling and looking after a newborn and all that stuff, it catches up with you. But I know ‘T’. He trains hard and he works hard. He’s got a good attitude.”

Stimson said Pangai had taken the omission from this weekend’s game in his stride. “As everyone knows, that’s footy sometimes. You have your good days and your bad days,” he said. “We’ll get around him. He’s a very confident person and he’ll do everything he can for the team.”

Stimson is currently undergoing a course of intravenous antibiotics after developing an infection in his knee but plans to line up on the weekend.

BBL blaster signs with Strikers, but will miss finals