Sydney star Lance Franklin says the delay over his new AFL contract was because he was unsure about playing again.

Franklin is adamant it was never about whether he would stay at the Swans. One of the AFL’s all-time greats gave Sydney a massive boost in the grand final week when Franklin confirmed a new one-year deal that takes him into next season.

“I needed to sit down with my family, we came to the decision that we wanted to stay in Sydney,” said Franklin.

“It was obviously a long process to come to that decision. I wasn’t sure whether I was going to go on … I still have the passion, I love the game.

“It was a hard decision.”

He also did not rule out playing beyond next season.

Following months of speculation, the 35-year-old said he wanted to make the call now to avoid any distractions in grand final week, with the Swans starting as underdogs against Geelong on Saturday at the MCG.

“Obviously we have the grand final this week, there’s going to be a lot of speculation – ‘aw, is he going to go on?’” Franklin said

“I just wanted to make this about the boys. This is a huge game for us.”

Just as Michael Jordan famously said “I’m back”, so Franklin announced “one more”.

Sydney cheekily copied the format of Jordan’s 1995 NBA comeback when they released a statement on Monday night, confirming the Swans star would play on in 2023. The tweeted two-word announcement closely followed the layout of the fax 27 years ago that heralded Jordan’s return to basketball.

Asked about the unique announcement, Franklin said it definitely was not his idea.

Franklin’s landmark nine-year deal ends after the Swans play Geelong on Saturday in the grand final at the MCG.
The star forward, who reached 1000 goals in round two against Geelong, had put contract talks with the Swans on hold amid speculation he could go to Brisbane.

He has played 340 games and kicked 1047 goals, putting Franklin fifth on the AFL all-time list.
Franklin played 182 games for Hawthorn between 2005-13 before he shocked the game with his Swans deal, worth $10 million.

This will be his sixth grand final, with the first two resulting in Hawthorn premierships. Franklin has played in two losing grand finals at the Swans. But that is about the only prize missing from his 158 games with Sydney.

Franklin has well and truly delivered on his bumper deal with the Swans, winning the club’s goal-kicking award six times along with two Coleman Medals and four All-Australian selections. He has been picked as an All-Australian eight times and is a certain AFL Hall Of Fame legend after retirement.

Sam Reid hoping to be fit for decider

Franklin’s teammate Sam Reid will be given every chance to play in Saturday’s grand final against Geelong, after he suffered a minor adductor strain during the Swan’s victory over Collingwood in preliminary final win

It was reported on Monday night that Reid underwent scans earlier that day and was hoping to train on Tuesday, but was notably absent at the training session

Many are speculating on which call coach John Longmire will make on the veteran forward-ruck.

“If you’re Buddy Franklin you take that (injury) in, but I don’t think Sam Reid plays,” said Herald Sun reporter Jon Ralph on Fox Footy’s On The Couch

“We don’t know if he’s gonna get up, I don’t know what sort of treatment he’s gonna have. Can you get over a groin strain in seven days?”

Robinson continued: “So do you want to go in with a 70 per cent Sam Reid? What if he’s out there and he does it in the first quarter and they’re down to 22 (including the sub)?

“He’s having a really good last third of his career, Sam Reid. John Longmire has to make that decision, and Reid.

“Are you going to survive four quarters of the hustle and the bustle of a Grand Final? It’s a big risk. If he puts his hand up and it goes the first time he goes up and jumps, that’s a bad decision, isn’t it?

Won’t somebody think of the children?

With so many children watching their sporting heroes at the awards night, Gaze expressed his frustrations over how some of the stars were shown drinking excessively and what that look portrayed.

“I understand that I’m at that demographic now where you can get a little oversensitive to stuff that’s not that significant,” he told SEN’s The Run Home on Monday. 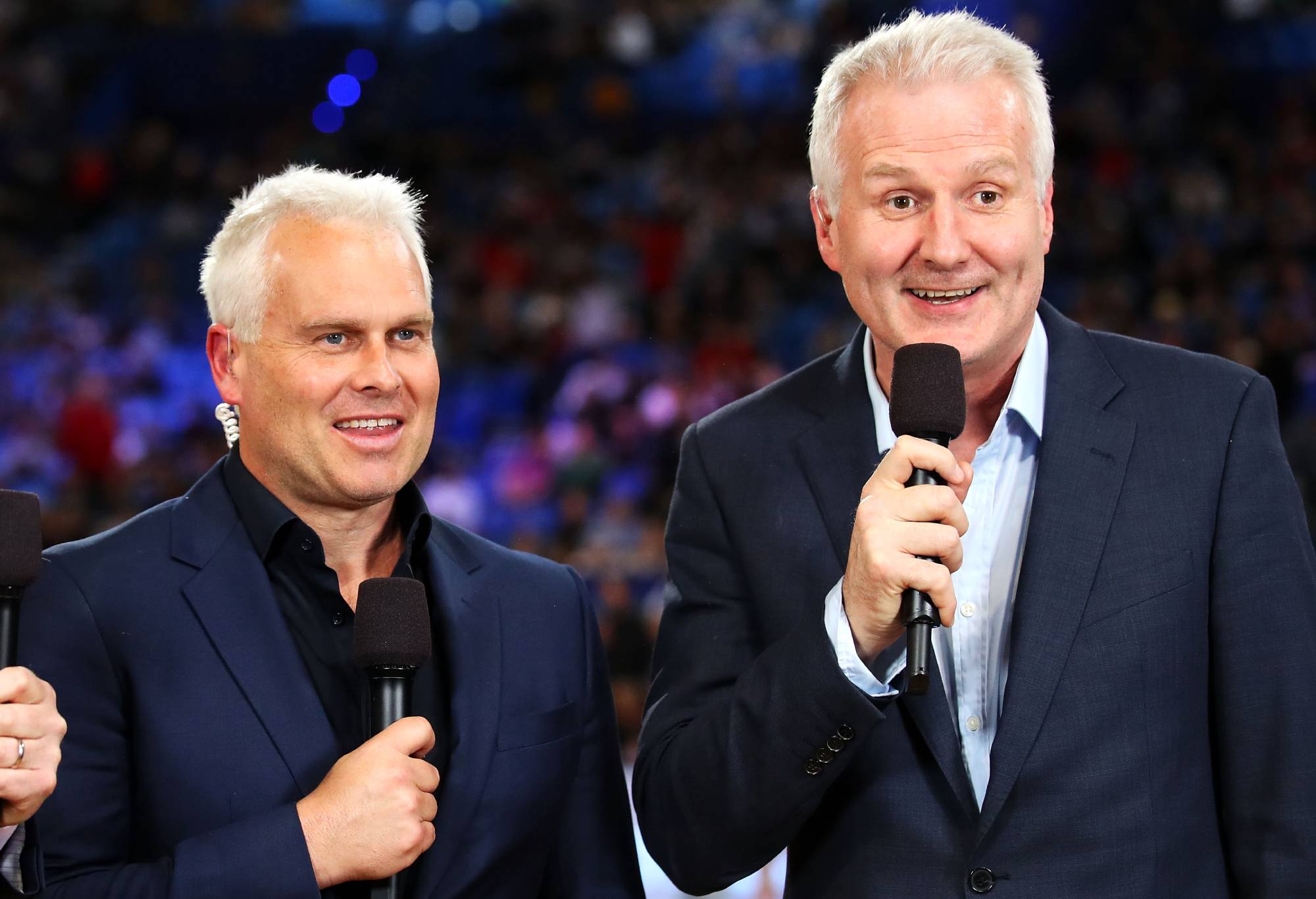 “It’s the end of the season, I get it. Players are finished, they’ve worked their tails off for a long period of time, they need to be able to unwind and have a good time.

“I just felt a little, and this is the dad in me, a little uncomfortable with the drinking, like it was some kind of game they were playing – ‘Scull a beer when you get a vote and chuck the black glasses on’.

“What it does is it normalises behaviour that I think is not a good message for kids.”

Hird still in the hunt for top job

James Hird is “very, very keen” on being named the next head coach of the Essendon Bombers, according to former club great Tim Watson.

Despite not having anything to do with the recruitment process, Watson claims he knows “for a fact” that Hird wants the top job.

“I’ve spoken to nobody that’s on the inside of this,” said Watson on SEN Breakfast.

“But what I do know is that James Hird is very, very keen to be the coach of the Essendon Football Club, I know that for a fact. 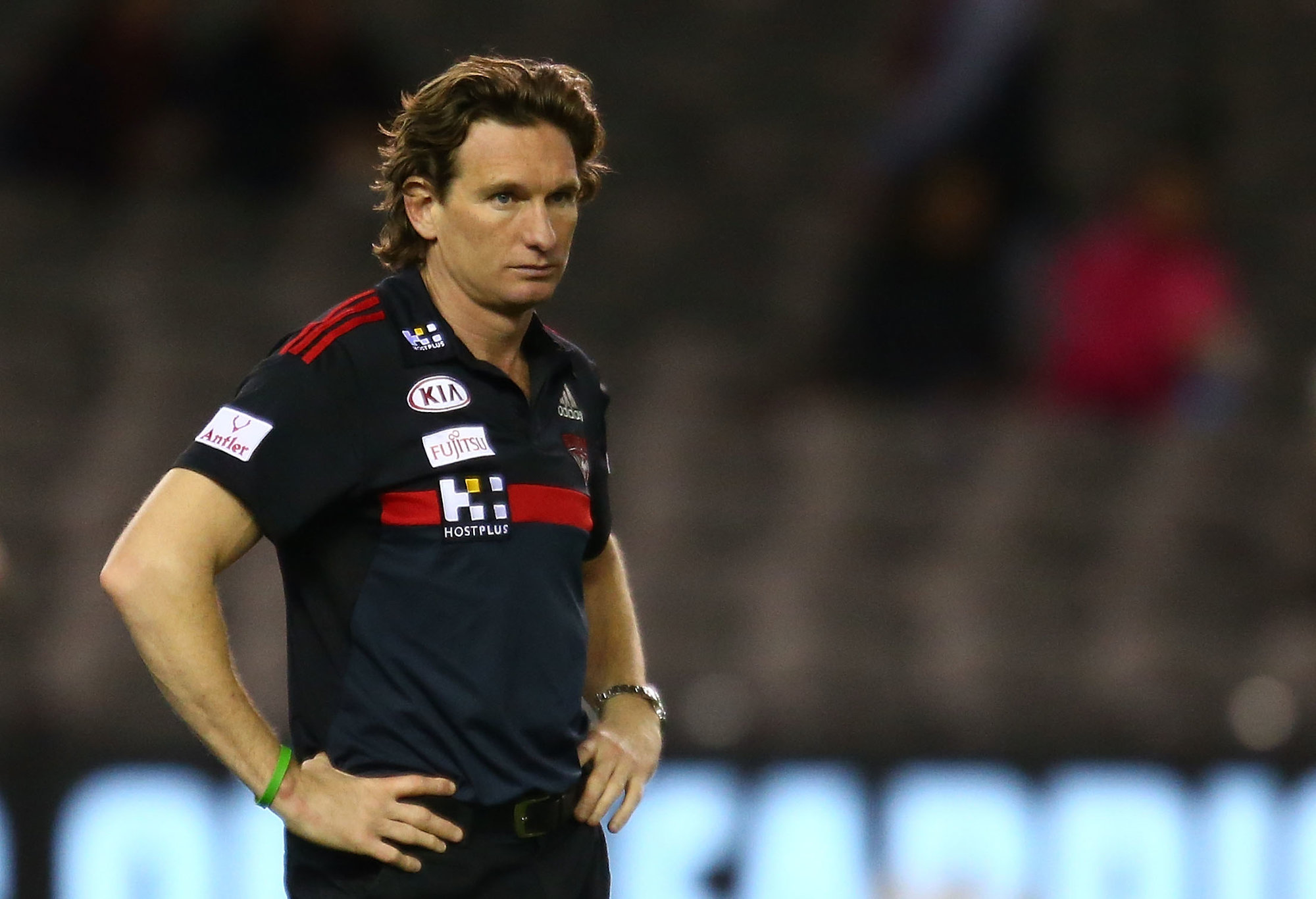 “I am supportive of him throwing his hat into the ring and going for the job as hard as he likes.

“There have been others that have pulled out, we learned on the weekend that (Don) Pyke won’t be part of it too.

“I’m still hearing from people around the edges of all this that Brad Scott still might be interested in going for the job, but I think that’d be at the very pointy end of interviews.”

Current Essendon assistants Daniel Giansiracusa and Blake Caracella are also possibilities to take over the top job. The club is hoping to have everything finalised in the next two weeks.

Dunkley on the move

The out-of-contract star, who led the Bulldogs’ Brownlow Medal votes tally on Sunday night with 14, will be heading north for the 2023 season, according to SEN’s Sam Edmund.

He is expected to receive a whopping six-year deal from the Lions, who are looking for more midfield strength to assist superstar Lachie Neale.

Dunkley reported rejected a five-year contract offer from the Bulldogs to remain, while Port Adelaide were the other party primarily interested in the 25-year old.

“Josh has been weighing up this decision for some time and this news is obviously disappointing for the club,” Dogs list manager Sam Power said in a statement.

“We believe Josh is at the peak of his powers in a football sense having had a career-best season in 2022, averaging 25 disposals and kicking 18 goals across the campaign.

“The Club was clearly intent on Josh staying with the Bulldogs, having tabled an attractive contract offer for him to continue with us for the long term.

“Given we have only learned the news this morning, we will take some time to work through the Club’s options leading into the trade period.”

While out of contract, Dunkley is not a free agent, meaning the Lions will either have to trade for him or run the gauntlet in the pre-season or national drafts.

Making things even more complicated is the Lions’ likely need to match a high draft bid for father-son superstar Will Ashcroft, with the expectation that wooden spooner North Melbourne will bid with their prized pick 1.

Dunkley, whose contract with the Dogs has expired, has been the subject of speculation for much of the season; indeed, his future at the club has been clouded since requesting a trade to Essendon two years ago.

That trade fell through, primarily due to Dunkley remaining contracted for two years, while the Bombers’ interest in him has since cooled.

A member of the Bulldogs’ fairytale 2016 premiership team in his debut year – the youngest member of their 22 – Dunkley has played 116 games in red, white and blue, including all 23 in 2022.

Averaging more than 25 disposals a game and kicking 18 goals, he polled 14 Brownlow Medal votes for the season, having also amassed 15 back in 2019.

He was one of the Dogs’ best in their elimination final loss to Fremantle, amassing 23 disposals and 14 tackles.

Dunkley is among the favourites to claim the Bulldogs’ best and fairest award on September 28, rubbing salt into the wound at the Whitten Oval.

‘Left my eyes at the count’: Hungover Cripps soldiers through interview after Brownlow win

Patrick Cripps claimed while accepting the 2022 Brownlow Medal that he’d ‘love to be sober this time next year’ – and the party certainly continued after claiming the AFL’s most prized individual honour.

The Carlton captain spent a ‘long night’ celebrating his triumph with Blues teammates and loved ones, and was visibly worse for wear in the early hours of Monday morning, soldiering through an interview with Nine’s Today Show.

“It’s been a long night, but it’s all worth it. It’s been great fun. I’ve had a fair few mates here, and obviously family to celebrate.

“It’s a weird feeling being outside so early, but it’s all worth it.”

When teased by host Karl Stefanovic over his glazed expression, Cripps’ response had the broadcaster in stitches.

“One thing I will give advice to you – if you’re staying at Crown, you’re going to an awards ceremony the night before, just make sure you don’t leave your eyes in the villa when you come down to do the cross!” Stefanovic quipped.

“You can probably tell [by] my eyes… I left my eyes at the count last night.”

Making things even worse for Cripps, the 27-year old had had to cut his post-season holiday short to make a mad dash back to Australia for the Brownlow, with the night having been moved at short notice a day earlier to Sunday night, to avoid a clash with Queen Elizabeth’s funeral.

Consequently, Cripps could add jetlag to his long list of ailments.

“I’m crying out for a bit of sleep right now,” Cripps said.

It’s all worth it when you win the Brownlow. I’ve just got to keep punching out the next few hours – then I’ll be hitting the pillow pretty quick.” 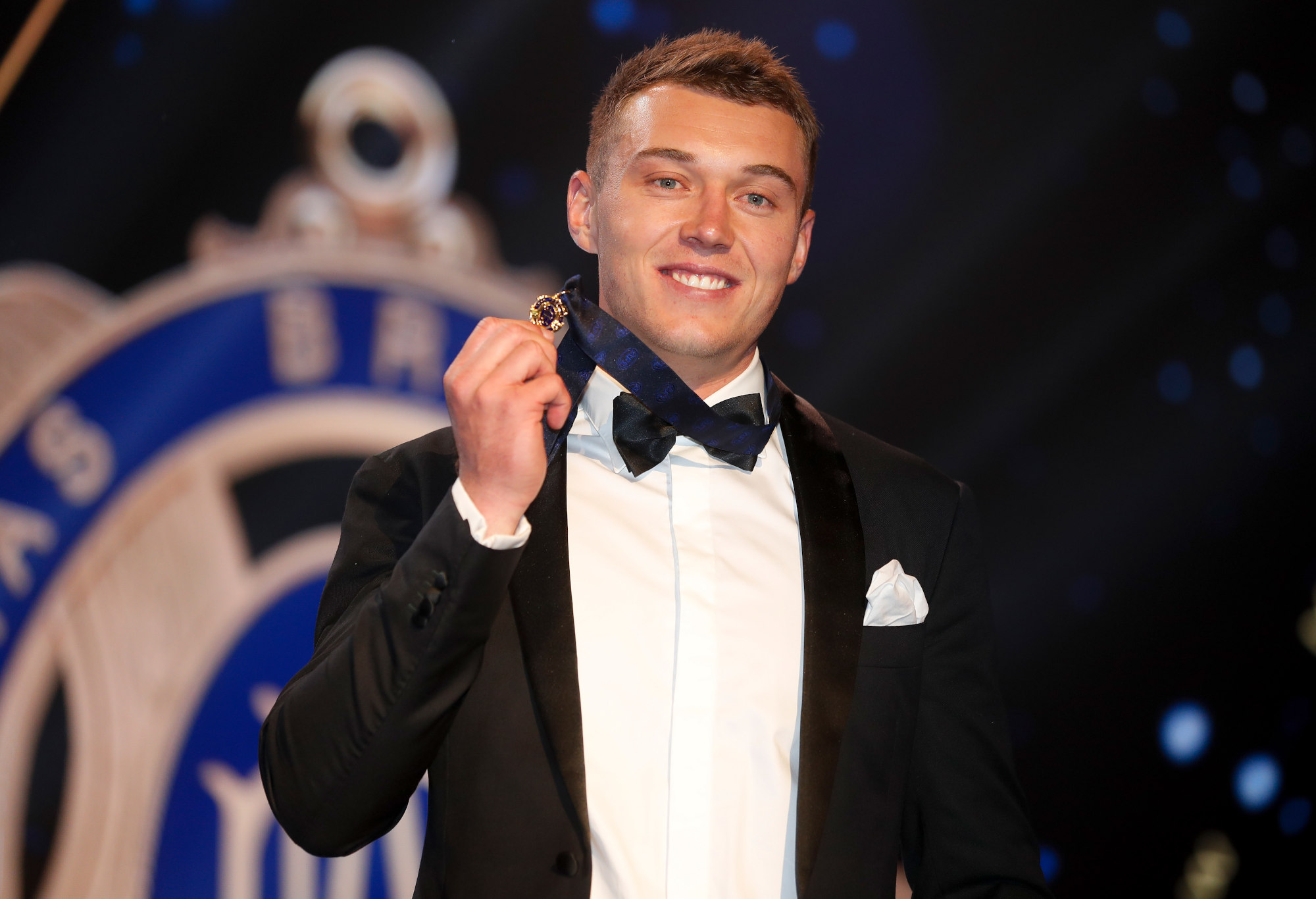 The footy world has lit up over vision of Melbourne star Christian Petracca’s less-than-impressed reaction to a Brownlow Medal like mispronunciation from league CEO Gillon McLachlan.

Reading the votes for the Demons’ Round 16 clash with Adelaide, in which Petracca received the maximum three, McLachlan mistakenly pronounced the star midfielder’s surname as ‘Petracker’, rather than ‘PetrAHca’.

Shared on Twitter shortly after, the incident has quickly gone viral.

The count was McLachlan’s final Brownlow as AFL CEO, having announced he will be stepping down from the top job in coming weeks.

Petracca would finish sixth in the count with 24 votes, one behind Dees teammate Clayton Oliver, giving McLachlan plenty of chances to pronounce his name correctly.