Canterbury Bulldogs have won their first back-to-back games for the first time since August 2019 in style with a 36-12 blitz over the Wests Tigers at CommBank Stadium.

Matt Burton was again excellent, causing Daine Laurie no end of problems with his kicking and providing crucial interventions in attack on his last audition before Brad Fittler picks him for the NSW Blues. It might come too soon for Josh Addo-Carr, who was superb with ball in hand but was responsible for an early Tigers try.

After upsetting Parramatta last Monday in Homebush, the Bulldogs knew they had to back up the upsurge in performances that has been seen since Mick Potter took over in May.

His first game was against the Tigers at Leichhardt Oval, and the Dogs were comfortably second best on that occasion. Since, however, they have improved so rapidly it was absolutely no surprise they eased to victory.

Burton was excellent, as was Jake Averillo – barely a first-grader under previous coach Trent Barrett but now looking reborn as a fullback.

Kyle Flanagan had his best game of the year and suddenly looked like a confident, dominating half. It was barely believable stuff.

The Tigers didn’t offer much resistance. Having copped a hefty defeat to Manly last time out, they went even worse today. It was meek stuff.

The first half, in particular, was pitiful and Brett Kimmorley would have been overjoyed to go to the break just a converted try behind.

They had been totally dominated: the Dogs had enjoyed 64% of possession, worth nearly twice as many tackles and five sets within the red zone.

Wests lost Alex Twal in the first minute to a head knock and Starford To’a to a nasty looking ankle injury and were a comfortable second best throughout. Their only bright spot was the return of Adam Doueihi, who made his first appearance since Round 23 of 2021. 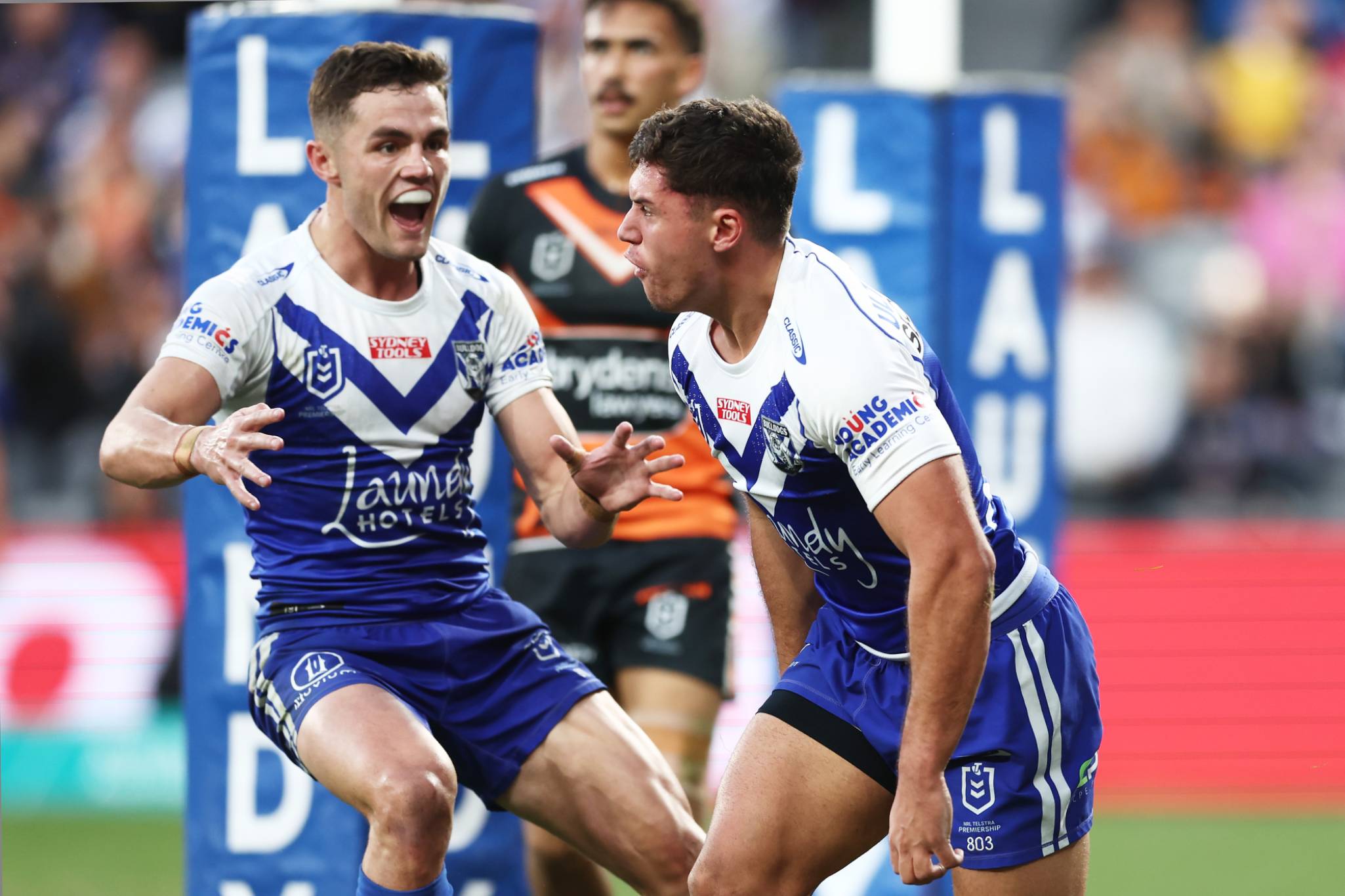 After an opening period in which both sides traded errors, the Dogs began to exert themselves and Jeremy Marshall-King was able to burrow over.

Both these teams have soft underbellies, however, and the Dogs’ began to show. Addo-Carr, who needed to be at his best with an Origin team set to be named, lost his bearings under a Luke Brooks kick. David Nofoaluma caught it, and still had plenty to do, but held off several tacklers to dot the ball down.

Having allowed Marshall-King in from dummy half at close range, the Tigers conceded another without a pass required: Averillo spotted Joe Ofahengaue sprinting out of the line ahead of the ball, opening up a clear route to the line.

The breaks continued, with Corey Allan catching a kick in his own end, but with nobody in front of him.

He could have pinned the ears back and aimed at the corner, but decided to take the tackle. It was sensible and nearly paid off, with Jacob Kiraz able to go close again soon after.

Burton had been causing the Tigers nightmares all day with his kicking, and started the second half in red hot form. He sent up a spiral bomb that Laurie was nowhere near, followed by a crossfield kick that Kiraz caught.

He was tackled when he landed, but smuggled the ball out on the deck – just, just above it – to get it to the feet of Averillo, who hacked on and caught up just before the ball went dead to extend the lead.

The floodgates were opening. Flanagan looped a pass out to Allan and with the Tigers backline shot, he found Kiraz on the inside for a well-deserved try.

Next in was Kurtis Morrin, the debutant, who saw Addo-Carr crabbing across the line and picked the perfect moment to straighten his line and crash through a hole. As he ran to the line, he was already saluting the fans in the corner.

The same could be said for Aaron Schoupp: he caught a Jackson Hastings pass on his own line and raced the length, outpacing even Addo-Carr to keep the party going.

The Dogs ended the game with 12 – Paul Vaughan binned for a professional foul – and with the man advantage, James Tamou was able to grab a consolation try.

Six Points: Best season in decades takes another twist, and Pies must do something – anything

Why the death of Lightning is good for Apple