Can the Swans continue their dominance in Sydney… or will the Pies be too good in the battle of the birds?

The last time a preliminary final was played at the SCG was 26 years ago.

The year was 1996. Back then Sydney had one of the all-time greats, a man by the name of Tony Lockett. He was their full-forward and for good reason. He knew how to kick goals. In fact, he kicked 1,360 goals at the highest level.

With scores level at 69 apiece between Essendon and Sydney, Lockett, affectionately known as ‘Plugger’, marked the ball. Before he kicked it, the final siren had sounded.

The all-time goal-kicking record holder only had to make the distance – any score would win the game for Sydney and send them through to the big dance.

Lockett had been suffering from a groin issue and by his lofty standards was relatively quiet that day. He had only kicked one goal.

Even though fatigue and exhaustion would have kicked in, as true champions do, he stepped up. Lockett launched a missile from outside 50.

Ironically the goalkicking AFL Hall of Famer kicked a point, but it was all they needed. The SCG erupted and the Swans were through to the Grand Final. Their first Grand Final appearance since rebranding as the Sydney Swans and the first since South Melbourne’s 1945 Grand Final.

Unfortunately for Rodney Eade’s men, they lost the following week by 43 points against the all-conquering North Melbourne, coached by Denis Pagan and led by Wayne Carey.

As the Sydney Swans prepare to host Collingwood in a twilight clash at the SCG on Saturday, the third-placed Swans know they can’t take the fourth-placed Pies easily.

It’s a do-or-die preliminary final with the loser’s season over. With a place in the Grand Final awaiting the winner, the stakes could not be higher.

In 1996, it was Plugger who stepped up when the Swans needed it most. In 2022, will it be another superstar forward in Lance Franklin who will step up?

And like Lockett, Franklin can also change the game on its head and win it off his own boot.

Hawthorn and Sydney fans have had the pleasure of witnessing that throughout his illustrious career. Buddy had a quiet qualifying final against Melbourne, where Steven May kept him goalless.

But champions like Franklin don’t usually have too many poor games, especially not consecutive ones. They usually rectify it pretty quickly, so that will keep Collingwood’s defenders accountable.

They say reputations are built in finals. And for good reason – the proof is in the pudding. Hawthorn legend Dermott Brereton throwing up after being knocked out by Geelong’s Mark Yeates in the 1989 Grand Final, only to come back and play an instrumental role in the Hawks winning that flag, later revealing he played with a punctured lung.

Franklin himself has shown he has what it takes, stepping up in big finals moments on countless occasions. After winning two premierships with the Hawks in 2008 and 2013, he crossed over the border. He famously signed a nine year deal worth $10 million with Sydney that expires at the end of this year.

2020 was a disappointing year where the superstar forward was crippled with injuries and could not manage a single game. However, for the most part, he has repaid the faith the club placed in him.

Except one thing remains – the elusive premiership.

In 2014 and 2016, he helped lead his side to Grand Finals. However on both occasions, Sydney fell agonisingly short. In 2014, the Swans lost to Hawthorn and in 2016, they lost to the Western Bulldogs.

Can he finally help John Longmire and his teammates secure a premiership? 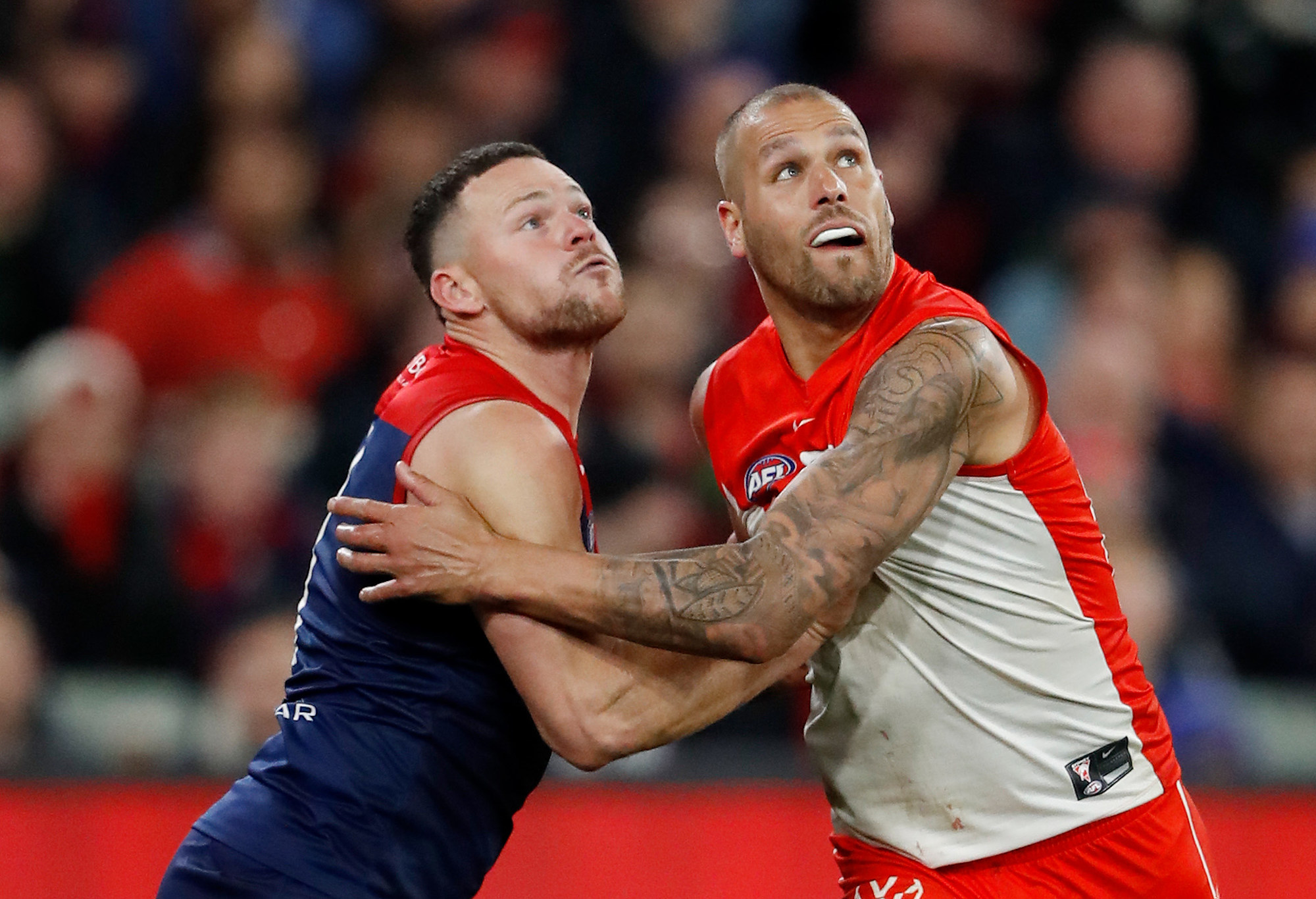 Steven May of the Demons and Lance Franklin of the Swans compete for the ball. (Photo by Dylan Burns/AFL Photos via Getty Images)

Wahieb Faltes, a die-hard Swans supporter, thinks his side will be too good in the battle of the birds.

“The Swans will flex their wings and fly away to the granny,” the high school PE teacher said.

There’s another bloke that will be playing on Saturday that will have other plans down the other end of the ground. His name is Jordan De Goey.

De Goey missed the last clash between these two sides in round 22. The Collingwood small forward has been in scintillating form in the Pies’ two finals.

De Goey will be a great addition to the side that narrowly lost to the Swans last time they met.

And Jim Yaloussis, a passionate Collingwood member, agrees. “De Goey is a great in, he didn’t play the last time we played them,” he says.

De Goey will be accompanied by Brody Mihocek and Will Hoskin-Elliott up forward. Then there’s crafty Jack Ginivan and Darcy Cameron and Jamie Elliott to support.

“I believe our best can match anyone in the comp. We proved that against Geelong. I believe we’re building something special and whether it’s this year or not is yet to be seen,” he said.

But the passionate Pies man says his club needs to be switched on from the start.

“Our pressure needs to be on from start to finish and if we bring that intensity I think we can win. It’ll be won in the middle,” he said.

A team does not revolve around one player. Every player representing the red and white or black and white on Saturday will be crucial to their side’s success.

Scott Pendlebury, Brayden Maynard, Steele Sidebottom, the Daicos brothers, and finals specialist Mason Cox will be just some of the other Pies who will play a vital role. 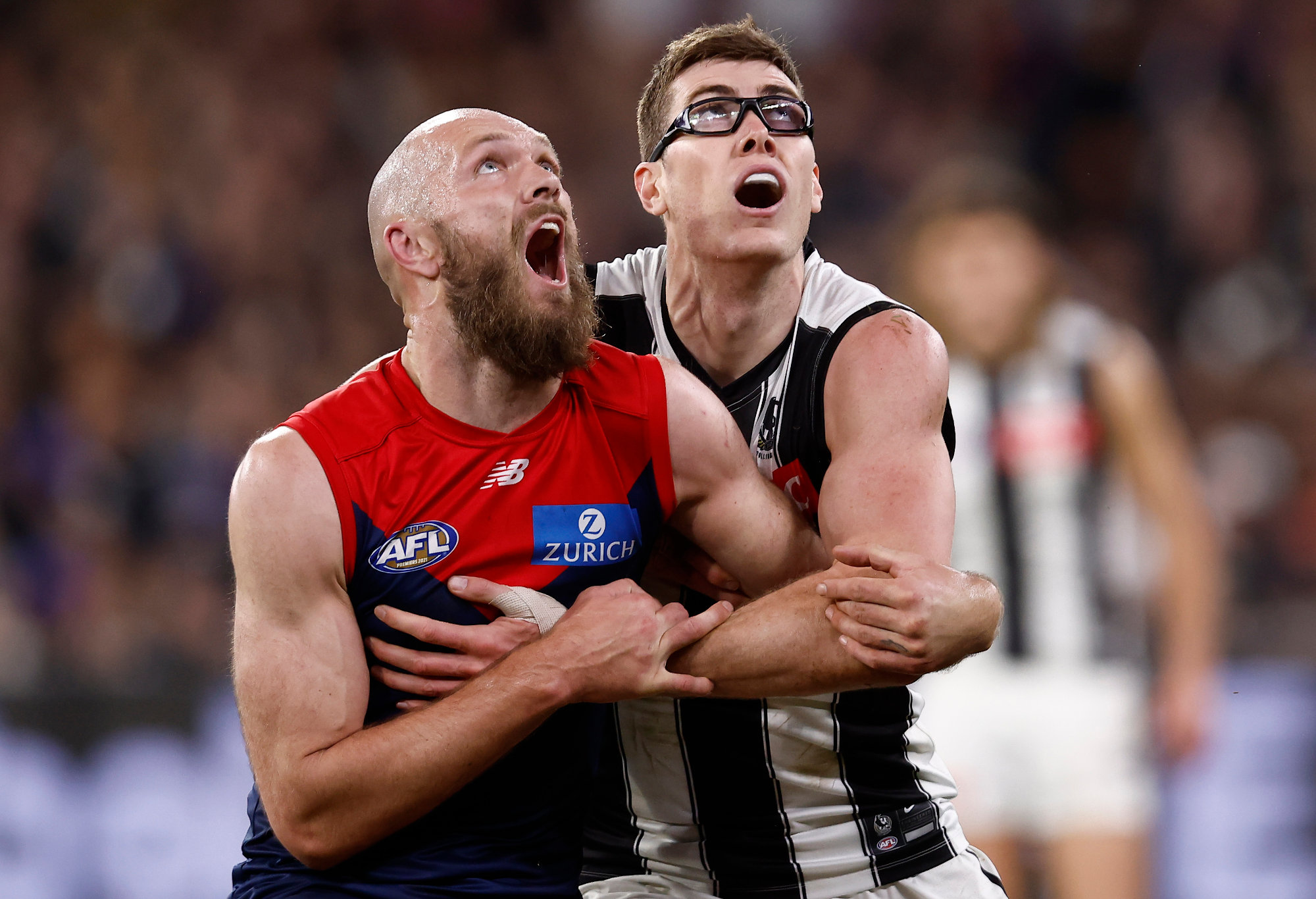 For the Swans, down back Dane Rampe and the McCartin brothers will be key to stopping the Pies’ attack. Callum Mills, Isaac Heeney, and in-form forward Tom Papley will also be vital to ensuring success.

After the round 22 defeat, Coach Craig McRae said his side didn’t adjust to the dimensions of the SCG as well as they should. To combat that, the Pies have adjusted their training base this week to match those measurements.

Both sides come into the clash with impressive form. The Swans have won their past eight games. And the Pies have won 13 out of their last 15 games.

One of those two losses, though, was against the Swans at the SCG only a month ago. On Saturday, we’ll find out just how much they learnt from that loss.

Both coaches have shown faith in their current side, deciding to go in unchanged from their last match.

For what it’s worth, I think it will be close. Both sides will need to bring their absolute best to win.

Can the Pies continue their impressive form or will the Swans prove too good at home?

What You Need To Know

With Polio’s Return, Here’s What Back-to-Schoolers Need to Know