Kyle Chalmers used the lane rope as a bridge over troubled water and issued the silence signal.

“That probably means more than giving a fist pump or a tensing of the muscles,” Chalmers said of his gesture. “For me, I hope that sends a powerful message.”

Neither was there much subtlety to Chalmers’ victory, one of five Australian gold medals at the Birmingham pool on Monday night.

Emma McKeon collected her fourth gold of the Games, the 12th of her storied career.

Chalmers, a day after saying he felt like flying home when overwhelmed by media scrutiny, led from start to finish in a display of brute power.

“It’s a bittersweet feeling for me,” he said. “Instead of enjoying the moment, it’s almost a big sense of relief to be honest with you.

“This last 48 hours has been hell. It has been an emotional rollercoaster.

“Even speaking to my coach before the race, I almost started crying and I’m not an emotional person.”

In that 48-hour time span, Chalmers raged at reporting about his relationships with fellow high-profile swimmers Emma McKeon and Cody Simpson.

Chalmers blasted media attention on a supposed love triangle as fake news which made him feel like departing Birmingham and reconsidering his swimming future.

Instead, the South Australian stayed and is now a triple gold medallist in Birmingham following earlier relay wins.

McKeon’s latest gold was her first-ever international medal in the 50m butterfly and her 34-year-old teammate Holly Barratt claimed silver in a dead heat.

“It’s a hard workload physically but it’s training my mind to be able to handle that many races,” she said of her program of eight events. 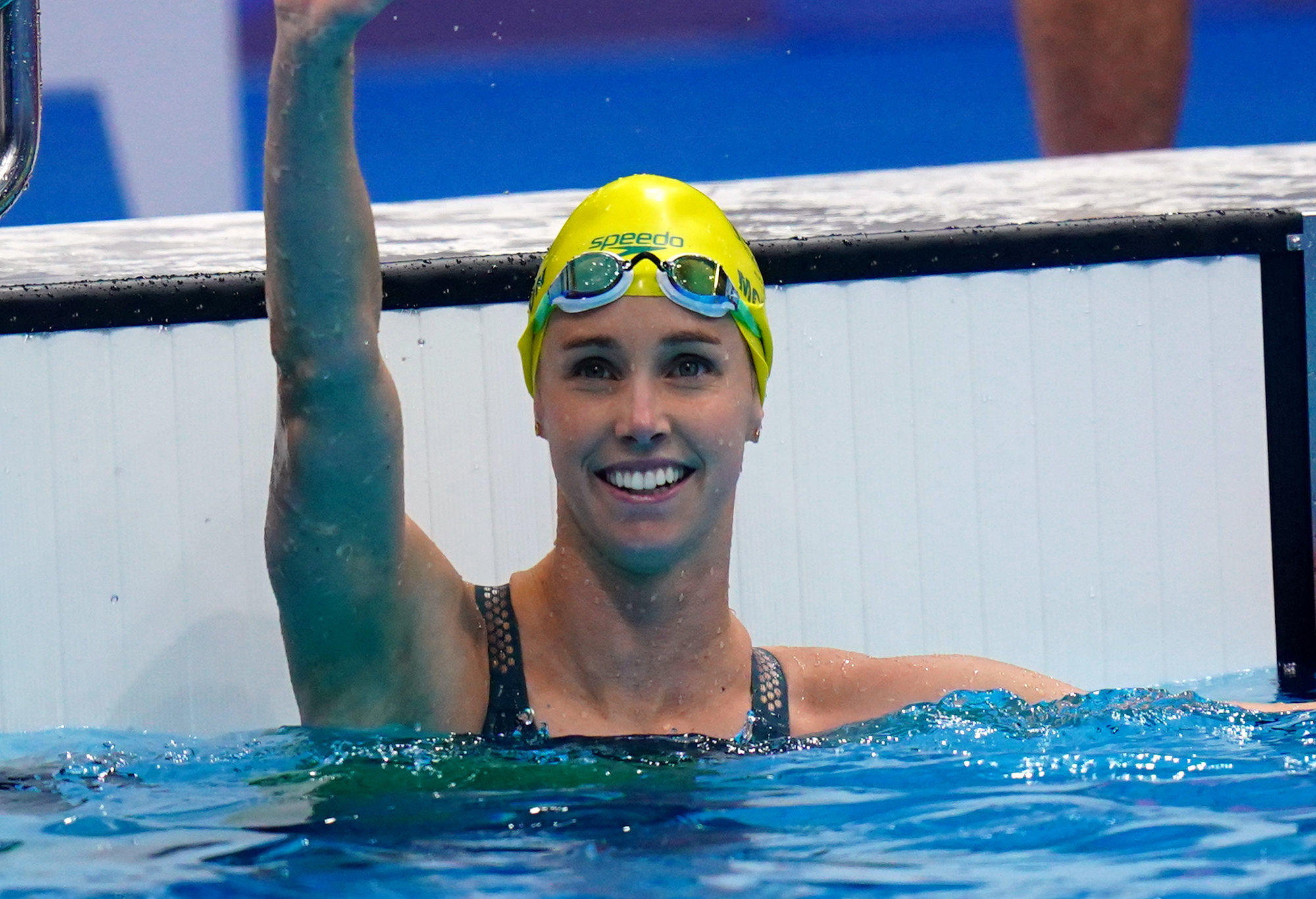 McKeon is now a dual Birmingham gold medallist after winning the 200m backstroke. Just 20 minutes later, she swam to silver in the 200m individual medley.

“To get up there and do both those events, it’s challenging,” McKeown said.

“I’m not going to lie and say I wasn’t scared to do it. I just wanted to race tough.”

Australia’s swim team now has a colection of 16 golds, 11 silver and 12 bronze in Birmingham.

Matt Glaetzer admits he may have had his final Commonwealth Games race – but believes it couldn’t have ended with a more glorious or unexpected gold.

Australia’s top track sprinter won his record-equalling fifth title at the Games in Monday’s 1km time trial – and had to do it the hard way.

Less than 48 hours after his terrible crash at the London Olympic velodrome which left him needing his elbow cut open to remove splinters, the Adelaide flyer was faced with the enormous disadvantage of having to ride a bike with different handlebars because of safety reasons.

Even he felt he couldn’t win while having to employ a less aerodynamic position with sprint handlebars instead of pursuit aero-bars, yet produced one of his great rides to successfully defend his four-lap title.

Last to go, Glaetzer clocked 59.505 seconds, with Australian silver medallist Tom Cornish left with head in hands after the three-time Australian champion had earlier clocked a potential winning time of 1:00.036.

“It’s going to be a very big stretch to make another Commonwealth Games, so that was more than likely my last Games ride – and to take away a gold for Australia is special,” said Glaetzer, after matching Anna Meares’ record Australian cycling tally of five Commonwealth golds.

“It’s becoming a habit for me at the Commonwealth Games, having to overcome adversity. It is really special.

“I’d rather not have the lows to bounce back from, but it’s testament to the challenges we all face that there’s always a new day and we can always try again,” added the man who’s overcome thyroid cancer and serious injuries to keep soldiering on the last two years.

Glaetzer had been cruelly denied a medal in the sprint on Sunday after being relegated for unfair riding following victory in the bronze-medal race.

He revealed all three Australians had only been told four days before flying out to the Games they’d need to use sprint handlebars because of fears their power output might snap the aero-bar.

At last year’s Tokyo Olympics, AusCycling had to apologise for a catastrophic equipment failure when Alex Porter ended up with facial injuries after crashing head-first into the track in team pursuit qualifying after the handlebar snapped.

The governing body had said in a statement earlier on Monday their riders would have to use drop handlebars which would result in “marginally slower times” but were a safety necessity. 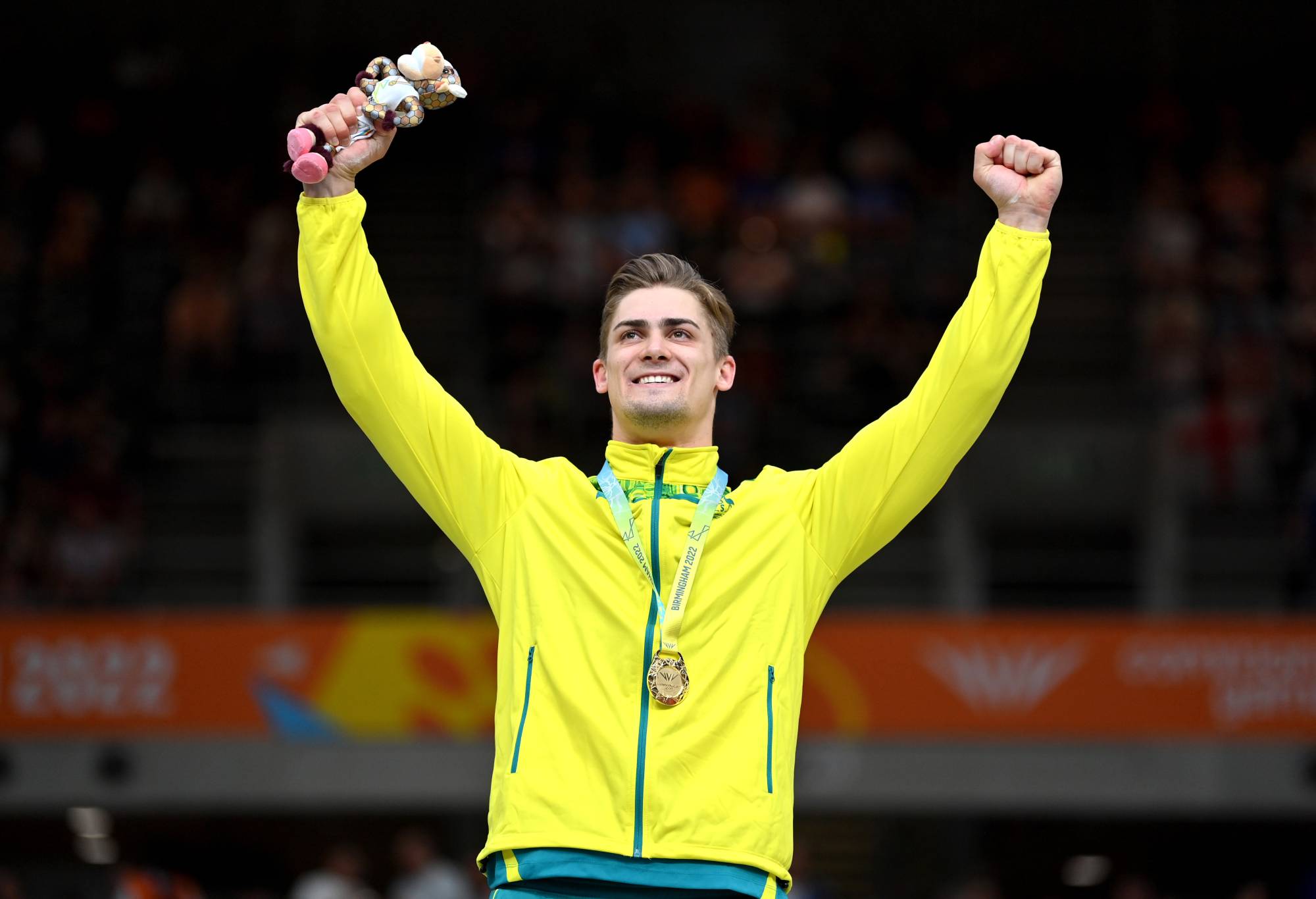 Yet Glaetzer made light of it.

“It cost us a second out there – I knew I had to ride a 59 to win it and that hasn’t been done on sprint bars by myself, so it was new territory and I’m just super happy,” he said.

“It was pretty last minute when we found out. We couldn’t control it. But we’d rather be safe, and not snap anything or lacerate our arm with something going wrong, so we took it in our stride.”

On the final day of the track program, Glaetzer’s was the eighth gold won by the Australians and their 13th in all – the same tally as New Zealand – as they maintained their record of topping the track medal table for an eighth consecutive Games.

Australia are through to the gold medal final in the men’s 3×3 wheelchair basketball tournament after Lachie Dalton nailed a long-range bomb in overtime.

In overtime rules, the first team to two points is declared the winner and after England went up 1-0, Dalton drained a perfect shot from beyond the arc to eliminate the hosts and progress to the gold medal game against Canada, who overcame Malaysia.

He was swamped by his Aussie teammates after his dagger blow.

Australia looked to have won the game in regulation time but an England lay-up with 10 seconds remaining forced the game into an extra period.

It was a little less hectic on the lawn bowls green but also a thrilling finish with Ellen Ryan making a remarkable turnaround to snare gold in the women’s singles final.

After trailing 10-2 by the eighth end, Ryan stormed back into the contest to win 21-17 over English opponent Luce Beere.

The Kookaburras flexed their muscle in the men’s hockey with a crushing 7-2 victory over New Zealand.

Sunflowers in Sanborn bloom for the fifth summer