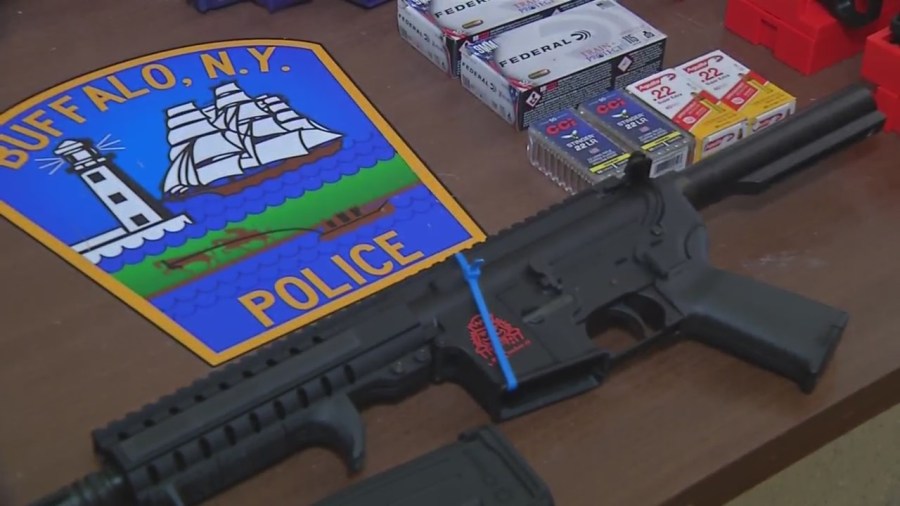 CHEEKTOWAGA, N.Y. (WIVB) — Buffalo Mayor Buffalo Byron Brown announced an arrest and gun seizure in the Town of Cheektowaga after a search warrant was conducted on Monday.

Steven Salerna-Sanchez, 22, was reportedly found in possession of a number of guns, including an AR-15, in addition to other illegal contraband, such as high-level body armor, thousands of rounds of ammunition, and ghost gun kits, as well as drugs and cash, in his home on Claudette Court.

Salerna-Sanchez, who also goes by the nickname “Gunsmith,” is accused of purchasing ghost gun kits online and selling ghost guns all over Western New York.

Gramaglia explained in a press conference that it takes approximately 30 minutes to assemble the kits and make them into an operational firearm before selling them in the community, furthering gun violence.

“It is a chilling reminder that we as a community, and as a country, have a long way to go as it relates to gun safety and being safe from illegal weapons that are on our streets,” Brown said in a press conference, which can be viewed above in full.

The road to Qatar is paved with Grey Wiggles