Concussion controversy, the next Ginnivan and a ‘pretty crappy’ match for even the players


There were times on Thursday night at the MCG when it felt like the Tigers of old were back.

With suffocating pressure, electric speed of ball movement forward and intercept marks everywhere in an impenetrable backline, Richmond kicked five consecutive goals in the first quarter to break the game open. Then, after losing the lead to Port Adelaide in the final term, the old Tiger desperation came to the fore once more, denying the Power any semblance of easy possession, tackling brutally and with a game-winner around the ball – this time, Liam Baker played the Dustin Martin role to perfection.

In between, though, is why the Tigers remain among the sides fighting for the last spots in the eight in 2022. Their best was captivating, yet the Power were probably the better side for the majority of their match. But for some horrific kicking into their forward 50 in the first half, they’d have taken the lead far earlier than the final quarter, and would likely have been able to hold on.

But the Tigers are the ultimate ‘shoulda, woulda, coulda’ side. Yes, it was ‘pretty crappy’, as Jack Riewoldt admitted after the game: but the yellow and black rode this game plan to three premierships against the odds. When they can still produce it, it remains a sight to behold.

All five of those first-quarter goals came from turnovers – the Tigers either forcing a mistake with rampant pressure on the ball carrier, or mopping up wayward long kicks from Port with ease. Nick Vlastuin marked everything that came his way in the first term, claiming three in that term alone as he made the most of a size mismatch with Steven Motlop; while Dylan Grimes also combined the odd strong mark with a superb defensive job on the dangerous Robbie Gray.

Then, up forward, is was the Judson Clarke show. Remember this guy: in three weeks time, opposition fans will despise him as much as Cody Weightman or Jack Ginnivan. Brilliantly skilled, clearly having the time of his life and – yes – immediately showing a capacity to drop the knees and win a high contact free kick for his first goal, it’s everything supporters love and rivals love to hate.

If the Power thought Charlie Dixon’s return would instantly make the haphazard entries inside 50 that marked their 0-5 start to the year, this was a reality check. Things remained abysmal – that the Tigers won the inside 50s 20-12 in the first term despite the Power comfortably edging the disposal and contested possession count was a mark of just how easy it was to exit their 50.

After two early goals to Todd Marshall and Karl Amon – both coming from players lowering their eyes and finding targets 40 metres from goal rather than bombing and praying – the Power hardly looked like scoring for the next half an hour. Every forward foray ended virtually the same way: a hacked kick forward under pressure, or simply a high speculator with not enough forward representation, and a Tigers turnover. Connor Rozee and Trent Dumont were among the prime culprits, repeatedly spiralling waywardly forward rather than using their pace and wiles to try and find a safer option.

To be sure, some of that was Ken Hinkley’s fault. Given the game plan his charges seem to be operating, their structure both forward of the ball and behind it was bizarre. At virtually every opportunity, the Tigers seemed able to generate extra numbers at will: in defence, Marshall and Dixon were seldom ever inside 50 when the ball was coming in there, and when the Tigers came back with it, there was space aplenty for Shai Bolton’s electric pace to make the Port defenders panic. 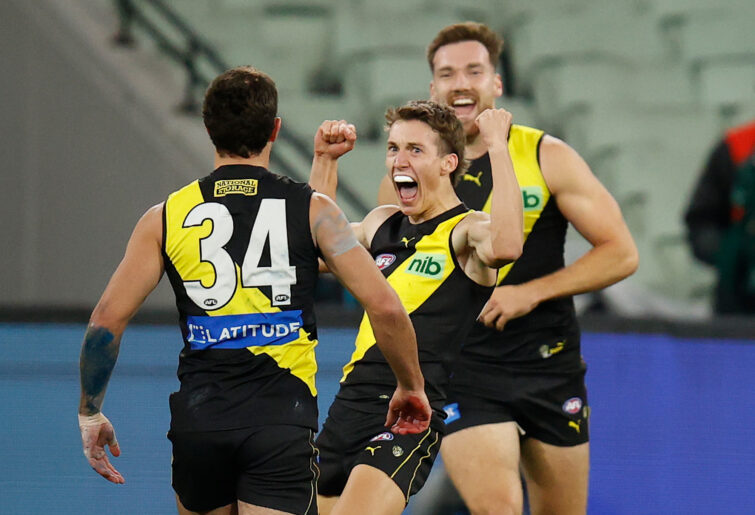 Judson Clarke of the Tigers celebrates after kicking his first AFL goal. (Photo by Michael Willson/AFL Photos via Getty Images)

The Power’s operation seemed to be: Tom Jonas or Tom Clurey and Aliir Aliir guarding behind the ball both on one wing. So the Tigers simply switched play to the other side, and no one was quick enough or aware enough to get across to fill the space. It was depressing how repetitive it all was.

So what caused the difference? Well, it started simple: not bombing the ball in until there were options to get it to. Marshall, the only forward to give a yelp in the first half, started it, plucking a strong contested mark to break the Power drought midway through the quarter.

By half time, the oft-maligned tall had three of the Power’s five goals, and was simply wonderful. Never possessed with the brute strength of a Dixon, Marshall has often been unable to assert himself on a contested marking situation in the past; but his hands are clean, his reading of the ball in the air excellent, and he found himself an opponent in young Tiger Josh Gibcus whose athleticism has belied his rawness in a wonderful debut year.

The kicking then improved: a wonderful pass found Dixon, deep in attacking 50 for once, in a one-on-one with Robbie Tarrant, and using his strength to mark was the simplest thing in the world. A goal, and as the half time sounded, the Power, for all their struggles, trailed by just eight.

As for the Tigers, it was noticeable how much their pressure, particularly around the ball, had dropped. This is not the premiership-winning Richmond of old: while they’ve had lapses in their frenetic attack on the ball in the past, they’ve been able to ride the waves thanks to their brilliant defence and a strong midfield capable of swinging the game on its own. Those circuit-breakers, Trent Cotchin and Shane Edwards, are shadows of the players they once were, while Tarrant in defence just hasn’t been the acquisition they hoped he might be.

Hinkley’s biggest gamble of the night, heading in without a recognised ruckman against Toby Nankervis and Ivan Soldo, began to bear fruit as well. The Tigers dominated the hitouts, as anyone could have foreseen; but Jeremy Finlayson’s athleticism around the ground, as well as his follow-up stoppage work, meant honours were shared for most of the match.

Just as crucial was the Power’s defensive work whenever the two rucks jostled; clearly, Hinkley wasn’t about to ditch a ruckman without doing something to combat hitouts to advantage. It worked: just two of Nankervis’ first 15 taps were to a Tiger, while three of Finlayson’s first four were.

After a third term of largely incremental gains for either side – the Tigers suddenly taking a leaf from Port’s book by controlling things around the ball, but beginning to hack aimlessly inside 50 for Aliir Aliir or Dan Houston to mop up – and led narrowly at three quarter time. Even Jayden Short’s usually laser-like right boot was brought back to earth, a horror kick deep in defensive 50 leading directly to a Power goal.

When Sam Powell-Pepper goalled from a quick ball in from the first centre bounce of the last after winning a free kick, the Power were in front.

But Damien Hardwick knows his team intimately, and with Dustin Martin still a long way from his dynamic best and Shai Bolton butchering the ball horrifically all night, needed to inject someone else into the midfield rotation. Enter Liam Baker.

With 13 touches across half-back in the first three quarters, the number 7 was hardly inconspicous; but moved to half-forward with stints on the ball in the last, he willed himself into being the best man afield. He’d have 13 touches again in the last term alone; so elusive was he that Jonas and Zak Butters took each other out trying to lay a hand on him.

Influential as well in a new role was Josh Gibcus, moved off Marshall and swapped with Noah Balta for the last term. Instantly, his height brought a free kick for a soft hold from the smaller Ryan Burton; a snap later, and Gibcus had repeated what he’d done against Sydney, and kicked a vital goal in the final term. A swingman for life?

Full credit to Tarrant, too, who stood up big time in the last quarter with some telling marks at crucial times. Perhaps able to shoulder less responsibility with the bigger, stronger Balta back there as opposed to a youngster in need of guidance like Gibcus was the answer, but the former Roo turned what could have been a nightmare into a perfectly solid evening at the office.

In the end, though, it was sealed with a touch of irony. A rare Nankervis hitout to advantage inside 50 was roved expertly by the brilliant Baker, who rolled through a goal. The Tigers were home, after an almighty slog.

A quick word to wrap up on the controversy surrounding the apparent lack of a concussion test, or at least not a thorough one, for Jonas and Butters after their clash. I think it’s still pretty clear that the general public, the AFL, and its clubs are still on completely different wavelengths about concussion.

We saw in State of Origin on Wednesday night that NSW were slammed for not removing Isaah Yeo from the field after a similar bad knock that staggered him. But we’re asking for trouble if we’re still leaving decisions surrounding concussion up to the discretion of the clubs.

That isn’t taking a shot at the Port doctors, who definitely wouldn’t do anything within their knowledge to compromise the health of their players. According to them, all the boxes were ticked for them to return, and they exhibited no obvious signs of concussion.

But the 20-minute concussion test, which you see on occasion earlier in matches, would have ruled Butters and Jonas out for the rest of the match, even if it turned out they had been fine. Can you blame doctors for being more inclined to the quicker, but potentially more misleading, route?

But it’s worth noting that the mandatory 12-day concussion period enforced by the AFL stems from the fact we simply don’t know enough about brain injuries for players to be allowed to resume. Steve Smith, if you’ll recall, passed the protocols to return after being sconed by Jofra Archer at Lord’s in 2019, but his condition deteriorated enough from there to have him miss the next Test.

Lauren Wood from the Herald Sun sums it up nicely – at this point, provided the player is reasonably self-aware, he can be patched up and sent back on five minutes after the initial incident. If that’s the threshold for concussion, then we’ve got a long way to go.

It probably wouldn’t have helped Butters, either, when a strong Tigers tackle shortly after coming back on saw him slammed into the turf.

As long as the current systems are in place – and the Power had already used their medical sub, which was at one point considered the solution to ensuring teams could check for a concussion without any numerical disadvantage – there will always be suspicion around teams rorting it, especially when games hang in the balance like tonight.

If the AFL is serious about concussion, it badly needs to address this with more than the half-hearted ‘medi-sub’ that has been around for 18 months and solved nothing. And that shouldn’t change even if it turns out Jonas and Butters were fine all along.

How You Can Avoid Losses in Online Casinos » Entertainmentwise