Dodge is about to attempt the toughest trick in the history of cars. It will try to convince a fanbase that loves the burble of a V8 engine, the whine of a supercharger, and the sharp scent of gasoline to go electric. The company’s argument will look, sound, and shift like a muscle car. But it won’t use a drop of the explosive stuff.

The car you see above is not officially headed to production. For now, it’s a concept car – a design study automakers use to show what direction they may be going next.

But Dodge has probably put more work into this than any vehicle the company has built in decades. We expect a production version hewing close to this within two years.

It’s called the Dodge Charger Daytona SRT Concept. Dodge unveiled it to the public today. And it’s here to convince The Brotherhood of Muscle that lightning under the hood is every bit as much fun as fire. 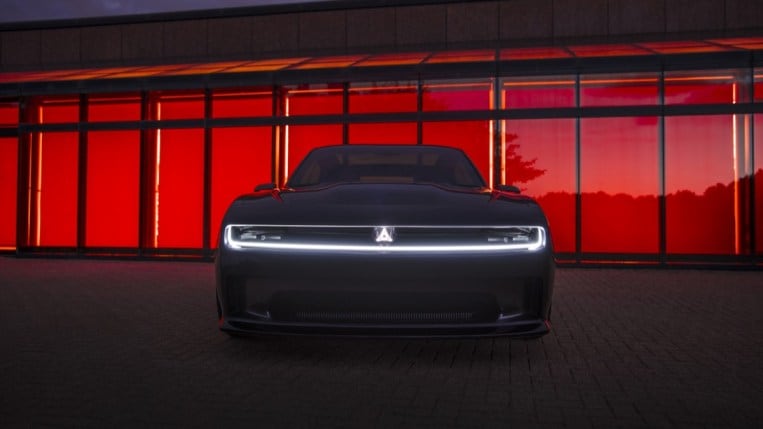 We’ll assume you don’t spend a lot of time on car Twitter.

If you did, you’d have seen a lot of mourning over the last few months. Dodge has announced the end of its current run of rear-wheel-drive, V8-powered big cars. The Charger and Challenger will exit stage left at the end of 2023 when Dodge shuts down production of both of its icons.

The company will celebrate them out with a year of special editions. But, come 2024, Dodge will not build another full-size gasoline-powered car.

That has triggered equal parts sadness and rage amongst the Dodge faithful. Surely some Dodge loyalists welcome the shift to electric power. But they’re not the ones dominating the world’s comments sections. 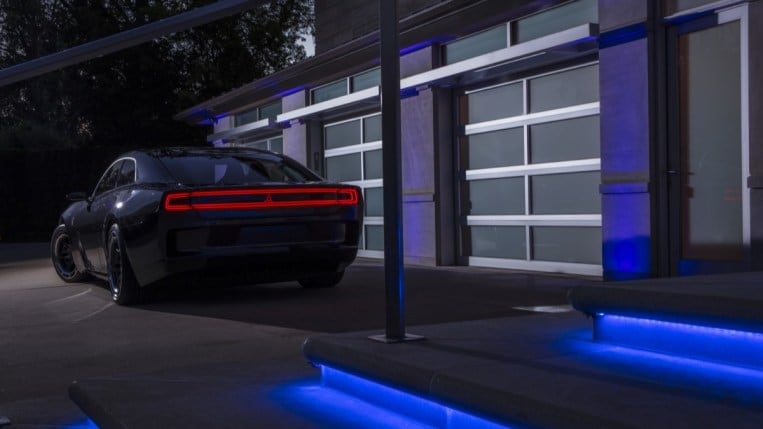 A Heritage and a Risk

Purists enjoy arguing over what, exactly, counts as the first muscle car (if you like being right, pitch the 1949 Oldsmobile Rocket 88). But everyone agrees that, by the middle of the 1960s, Dodge was one of the few masters of the form.

The image that pops into your head when you hear the phrase “muscle car” is probably an early 1970s Charger, particularly if the film saga of The Fast and The Furious has taught you the value of “fambly.”

But the company needs to go electric. The automotive industry is well on its way toward a day when most new cars are battery-powered. Dodge knows it can’t get left behind.

So the company is trying to lead its fans to voltage. “We can’t just wake up in 2024 and tell everyone, hey, we went electric,” explains CEO Tim Kuniskis.

But, he says, “It’s 1972 right now for the big V8s.” In 1973, an oil crisis introduced Americans to fuel-efficient small cars, and America’s automakers were caught unready. Japanese automakers like Honda and Toyota got a foothold in the U.S. market with cars that were less expensive to operate, and the Big Three have never fully recovered their market share.

Kuniskis says Dodge needs to be ready for the next big market flip. “That’s coming even faster. That’s the flip toward electrification. This is the next space race.”

The Challenger… Well, the Charger This Time

The first rocket Dodge will build for the next space race is full of unique technologies.

The Charger Daytona Concept looks exactly like you’d expect a Dodge muscle car to look. But even achieving the old-school muscle car shape took some new-school thinking. Dodge points to three innovations to explain what makes a Dodge EV different. 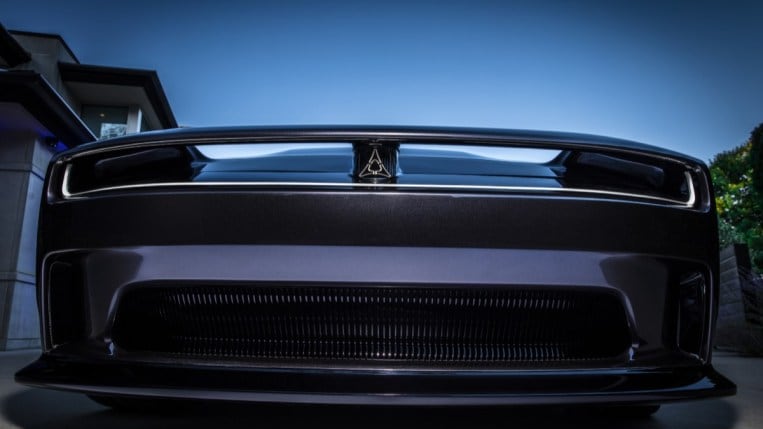 Electric vehicles (EVs) are streamlined. A blunt front end inspired by the muscle cars of the early ’60s would make one inefficient.

Dodge revived a classic triangular logo from the 1970s – it’s called the Fratzog for reasons no one seems to remember – for the center of the R-Wing.

The front end was the hard part. From the front back, it shares an obvious family resemblance to the Challengers and Chargers of Dodge history.

The display model also wears a playful logo Dodge calls the Banshee (more on that in a moment) behind the front wheels.

Inside, the design combines modern, sleek lines with classic inspirations. Smooth, leather-upholstered upper surfaces break at a “waterline,” in Dodge’s description, with panels beneath that bear the grille pattern of the iconic 1968 Charger.

A 12.3-inch central touchscreen, canted toward the driver, seems big…until you notice that the driver’s instrument screen is a massive 16 inches. There’s a head-up display to keep you from looking at it.

The concept seats four, but the rear seats are tiny and fold flat. 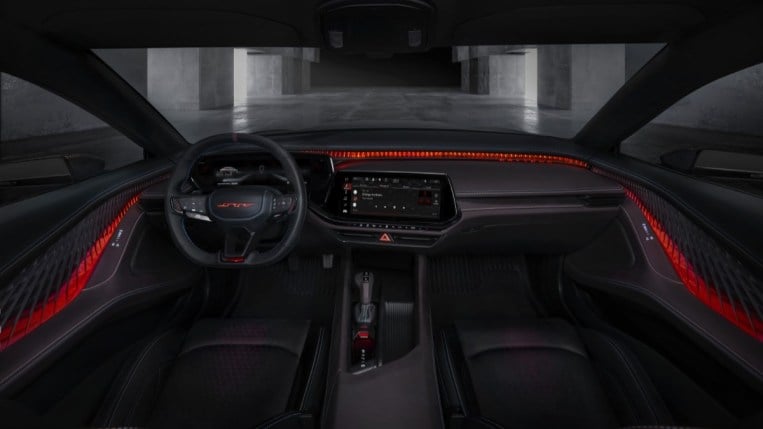 Dodge muscle cars were known for their classic pistol-grip shifters. The Charger Daytona uses a modern interpretation of that element. Just behind it, you’ll find the start button – protected by a flip-up cover like you’re about to launch a missile. Cool.

Muscle car lovers are every bit as in love with the noise their cars make as they are with the acceleration they provide.

By now, most people know that EVs can pin you back in the seat even more forcefully than a supercharged V8. There’s a Tesla with a 0-60 time under 2 seconds, after all. But it doesn’t roar like a V8. 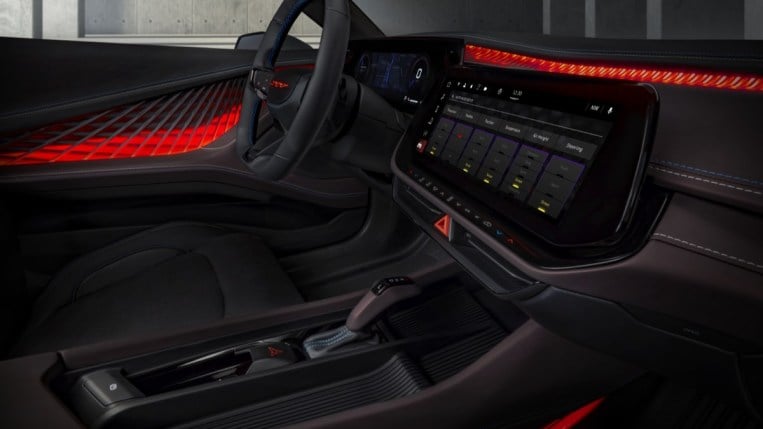 Instead, Dodge says, it “pushes its one-of-a-kind performance sound through an amplifier and tuning chamber located at the rear of the vehicle.” It sounds a bit like a supercharged V8 filtered through the phaser pedal in a rock guitarist’s effects rig.

Today’s electric vehicles are missing one other sensory experience vital to the muscle car aura. They don’t shift.

The Charger Daytona, however, offers the experience of a transmission in a car that lacks a traditional gearbox.

We’re not clear on exactly how it works but will bring more information when the press is allowed to drive the car.

By now, you’re asking the obvious question – what kind of power does this thing have?

The highest of the bunch is called “Banshee” – the next step after Demon, we suppose. We misplaced our perpetually-smoking handbook of the occult.

The company has said the Charger Daytona is all-wheel-drive. That’s the closest thing Dodge has offered to specifications for now.

Dodge may have a harder sell to make than any other automotive brand. The company has united its owners as a “brotherhood” and united them around a rebel’s image. It’s not easy to excite a brotherhood of rebels about joining a worldwide wave of change.

“Dodge is about muscle, attitude, and performance, and the brand carries that chip on its shoulder and into the [electric car] segment,” he argues.

The Charger Daytona isn’t for sale, so it isn’t the car that will bring Dodge into the future. But it looks close enough to production-ready that we think we’ll see that car very soon, looking an awful lot like this one.