Does any team actually want to play finals in 2022?

The 2022 AFL season has been strange.

With five rounds to go, who’d have thought that the biggest question on the road to September would be whether any club actually wants to be there.

It’s figurative in one sense and rhetorical in another, but we can go ahead and try to answer it anyway.

Geelong does, they’re the best team in it. Melbourne does, but that’s just because that’s when their season starts. The Swans’ 17-point win in Perth in Round 18 indicates that they do too – a nice fixture could see them climb up higher.

Collingwood’s won eight games in a row and have every chance of making it nine on the trot against a resurgent, albeit weaker Essendon team.

Six of these games have been won by 11 points or less, an astonishing level of clutch behaviour that even Chicago Bulls’ DeMar DeRozan has reached out to Craig McRae to personally invite him to the club.

At the start of the season, the Magpies would’ve just wanted to get the best out of themselves. Now, it feels like there’s an insatiable appetite to taste finals action. It’s the only explanation for the last three games in particular, where they’ve played extremely average football for three quarters and stormed home.

There is something very right about Nick Daicos and finals, though.

That’s about it. Four clubs have a clear desire to at least finish in the top eight and have shown signs that deem them worthy of such a placing.

You’d rather have too many teams seem hungry at this time of the year than too few though, which has made recent weeks and those coming up comically unpredictable and bafflingly puzzling.

Let’s take the Lions for instance.

It seems as though Brisbane and Chris Fagan are contractually obligated to feature at least twice in September, but we’re yet to see whether there’s a kicker in there to motivate them into going any further. Sure, early spring is lovely in Queensland, but the final week of the month in Melbourne is even better.

Their position on the ladder is inflated by a friendly home fixture and near unbreakable winning record at the venue, unless you’re the Bombers of course, and they haven’t stood up against the really good teams in 2022.

I’m still a believer that the Dockers are in a tier above all but two other teams in the race for a Premiership, but that isn’t a common opinion and it’s time they started acting like it, if not only to solidify the stance. 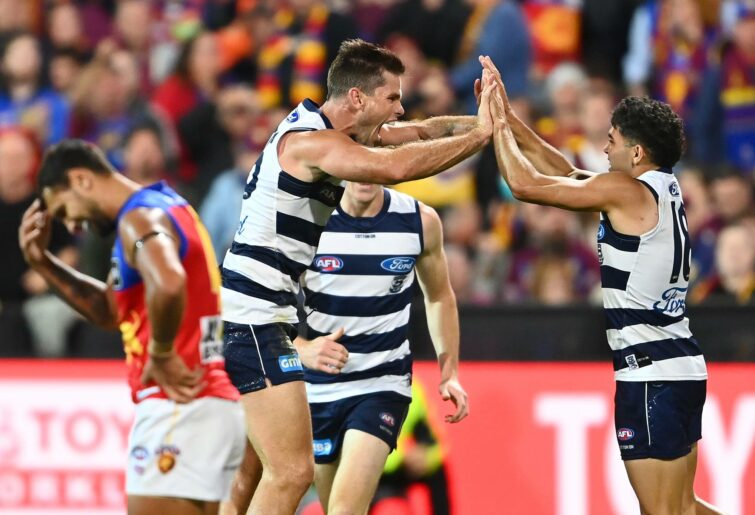 How good are the Cats really? (Photo by Quinn Rooney/Getty Images)

Since the bye they’ve won twice, a hard-fought victory against Port Adelaide and a blitzing third quarter turnaround against the Saints, while they were comprehensively outplayed by two top eight teams in Carlton and Sydney.

As expected, the Dockers set themselves up beautifully early in the season, so they can afford to go through the motions and crawl their way to September if they so choose, but a statement or two in the final few rounds wouldn’t go astray.

Carlton’s good enough to play finals, but probably isn’t good enough to win more than one, if that. That’s fine by the way, this was always a building block towards greener pastures in 2023, but in late July, they look more like a team going through the motions than one desperate to play footy for another couple of months.

At one point in 2022, it seemed as though 13 wins and good percentage were needed to make finals, perhaps even a mind-boggling 14 were needed to guarantee it.

The answer is really 12 wins and let’s see whose percentage is better, which really is an indictment on any club outside of the aforementioned seven who have guaranteed themselves an appearance.

After nearly five months of an AFL season, we know that there are one or two outstanding teams, a couple of really good teams and a couple more that are playing out of their skins, clearly winning the mental battle.

Then, there are five shambolic clubs, one of which will end up making finals and may well be enigmatic enough to beat a team going through the motions.

If the anticipated results eventuate in Round 19, St Kilda will be in eighth position on the ladder.

Regular readers will know how baffling this is, but it’s a by-product of this ridiculous 2022 season.

The Saints started off well, but were never playing well. If they turned this around mid-season, they’d have locked their top eight spot in. Instead, they don’t have a good backline, don’t have a good forward line and the midfield is one-paced. 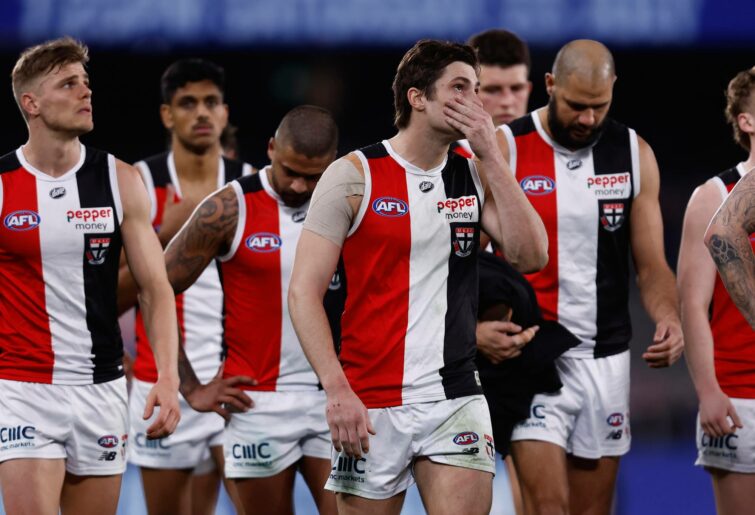 Yet with West Coast and Hawthorn in the next fortnight, the Saints can get themselves to 11 wins with relative ease and move ahead of their competition. Yes, they finish the season with Geelong, Brisbane and Sydney, but if 2022 has taught us anything, the only place you need to be is “there”.

The Saints have won just once in their last five games, yet have still been treading water. An indictment on others? Absolutely, but a fortuitous stroke of luck too for St Kilda.

It’s almost the inverse for the Bulldogs, who have to play Melbourne, Geelong and Fremantle in their next three before an easier finish to the season.

They’re only three percentage points outside the top eight at the moment but despite their talent, we covered their struggles last week. They look tired.

Somehow, the least shambolic of the finals chasers is the schoolyard bully that beat up on teams over the last two seasons, only to commence this year with five straight losses.

The Power pushed Melbourne and Fremantle in highly competitive games, swept Sydney aside, held on against Gold Coast and smashed GWS. It’s a decent form-line and only acts as a painful reminder as to what happens when a coach sits on his hands for too long – any danger of Connor Rozee playing midfield earlier on?

Port only has eight wins, but their last four games are against Collingwood, Richmond, Essendon and Adelaide. It’s possible.

To play in September is not only a badge of honour for a club, but also a fantastic reward for loyal supporters who are there for their teams through thick and thin.

When the opportunity is there to play finals for the first time in club history, try not losing two games by under a goal, then getting smashed by a team that has only recently won half the games you have.

Sure, Round 17 was remarkable for the Suns, but they could’ve ended this race a month ago and been everyone’s second favourite team. Maybe they too, are addicted to the same Queensland spring the Lions are.

Games against West Coast, Hawthorn and North Melbourne are to come, but the Suns are hardly as trustworthy as they appeared to be.

Yet if there’s one club whose coach will be pondering the same question we are here today, whether or not his team actually wants to play in September, its Damien Hardwick and the Richmond Tigers.

A month ago they showed great care, playing with a grit that had them not only in finals contention, but ahead of a few others for the Premiership.

It’ll garner little sympathy for those that are, but try being a Richmond supporter over the last fortnight. Noah Anderson’s goal after the siren was apparently the entrée to a main course that no one ordered.

What could’ve been an 11-win team sitting sixth on the ladder with five games to go, is an undisciplined group having to play Fremantle, Brisbane, Port Adelaide, Hawthorn and Essendon in their run home.

Hardwick says it’s a matter of “Richmond killing Richmond”, which means that if they can stop aiming any figurative weapon at their foot, they think they can get back on track.

The Tigers are the most shambolic team in the competition, but they’re the ones that can cause the most damage if they manage to find their way onto an AFL ground in September.

With five rounds to go, this should be a celebration of highly competitive, good quality teams jostling for position to open their premiership window.

Instead, we have a group of teams trying to make less mistake than others, with the focus not necessarily a desire to play in September, but rather, not face the repercussions of stakeholders by not playing in September.

What a strange year 2022 continues to be.

Betty Jean Grant gets adjournment in contemplation of dismissal