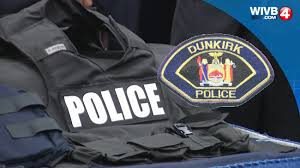 DUNKIRK, N.Y. (WIVB) — Dunkirk police are reminding people to use toy guns safely after a recent incident resulted in damage to a vehicle.

On Wednesday afternoon, police responded to an incident that was reported in the area of Lake Shore Drive East and Gazelle Street. The person reporting it told police that their vehicle was shot multiple times, damaging the rear window.

Dunkirk police said the 17-year-old suspect, who was located a block away, used a toy gun.

“This incident is the latest in regards to the recent trend in the City and Nationwide involving Splat-R-Ball/Orbeez guns,” police said. These toy guns are non-lethal guns that shoot water gel pellets that are propelled by a spring-loaded air pump mechanism.”

Officers are asking parents and guardians to make sure that minors are monitored while using these. The one who was taken to the Dunkirk Police headquarters in relation to this incident was “released with matters pending in family court,” police said.