‘Effort without system’ sums up Dons, and what was up with those 150th anniversary celebrations?

Nick Riewoldt’s comments on Fox Footy at three quarter time on Friday night, with Essendon doing a lot right yet trailing Carlton by 28 points, basically summed up in three words what I’ll take a couple of thousand to unpack here.

It perfectly hits at all the Bombers’ issues; the ease with which the ball sped out of their attacking 50 once they give up possession, the open space in the middle through which the Blues found targets aplenty every time they ventured, the number of times there were more navy blue jumpers inside their own 50 on the counterattack than red and black.

The Bombers gave it all at the MCG, galvanised perhaps by a stirring pre-match address from Dyson Heppell and the emotion of the club’s 150th anniversary celebrations. But a racehorse has boundless enthusiasm and gives everything it’s got out on the track: it still needs a jockey to direct it. Ben Rutten, for the moment at least, seems to be pulling the wrong reins.

The first minute was the match in a microcosm: the Bombers won the ball quickly out of the centre, won a free kick, and pumped it inside 50. The ball came to ground, the Blues cleared, and wouldn’t lose possession again until Jack Martin put it through the big sticks 50 seconds later after marking in space.

Once the Blues won possession – or more accurately, won it back, since the Bombers dominated out of the centre virtually all night – Essendon either had no plan or no ability to take it back off them. There’s a reason they’ve given up more marks than either North Melbourne or West Coast this year (they’re second-last behind, somewhat amazingly, Melbourne): they don’t close space nearly enough, allowing the best kicks in the opposition team to routinely carve them up with precise passing.

The Blues kicked three of their four first-quarter goals from plays starting in their defensive 50, without the Bombers being able to lay a hand on them. And unlike the Demons, who can happily allow opponents to chip around, the Dons don’t have the key defenders to hold up under pressure.

To be fair, it’s not like the backs could have done much early. The Blues dominated territory early, with 14-8 inside 50s by quarter, and but for the transition plays where Harry McKay and Charlie Curnow could lead any which way into acres of space, largely held their own. Jayden Laverde and Zach Reid shared responsibility for McKay, while Ridley’s duel with Curnow was a fascinating subplot; but while playing them on the back shoulder was fine for spoiling away high hopeful balls from the Blues, and prevented Tom Hawkins-esque protection of the space under them from the stronger McKay, it left them vulnerable to the Carlton transition. 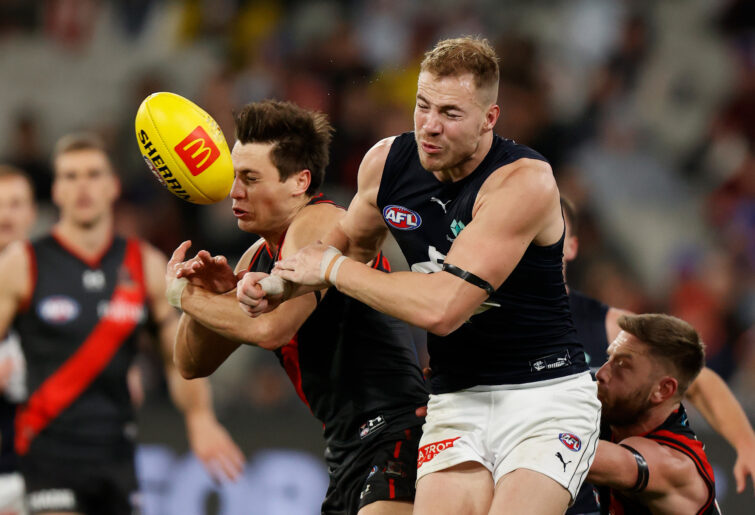 Harry McKay of the Blues and Jake Kelly of the Bombers collide. (Photo by Michael Willson/AFL Photos via Getty Images)

With not enough Bomber midfielders able to cover the space, and not enough time to set up a defensive structure given the speed with which the ball made its way downfield it made for trouble.

I’m ranging into tinfoil hat territory year, but I reckon the Blues are big beneficiaries of modern umpires favouring key forwards over their opponents. A free kick against Mason Redman to grant McKay his third was soft at best – if it was Cody Weightman, social media would have been in uproar – while a flying Tom De Koning was able to clear the pack for McKay to mark. Curnow and McKay are a killer one-two punch at the best of times, and the modern game is ensuring the Blues get even more reward than they might have done five years ago.

Jake Stringer was back – not that he was anywhere near his best – but the name Bombers fans must be longing for even more is Anthony McDonald-Tipungwuti. With both him and Will Snelling out – and ‘Walla’ now for good – it’s alarming to see just how easily the Blues could get the ball out of harm’s way all night. Their best distributors – Sam Docherty and Nic Newman – grabbed 19 marks between them; it’s always a sign of a lack of pressure when a team can get the ball so easily into the hands of the players they want with it.

The Bombers’ hopes lay in forcing a contest through sheer weight of numbers, and for a while, it paid dividends. For all the Blues’ early dominance, with the game’s first three goals, the Dons only trailed by five at quarter time. A tall forward set-up, with Peter Wright, Sam Draper and Harry Jones in attack, did seem to worry a Jacob Weitering-less Blues defence, especially under the high ball.

Jones and Draper both took strong overhead marks for majors early for the Dons, while Wright was able to bring the ball to ground for a crafty Jones snap in the second. Even Draper was dangerous once the ball hit the ground, showing for the first time all year that he may be a viable forward target as part of a two-ruck split in the long run.

Feeding much of it was Dylan Shiel, who enjoyed surely his best game since his injury last year allowed Darcy Parish to waltz into his best spot and dominate. With Parish clearly subdued, and eventually substituted, with a calf injury, it enabled Shiel to become distributor-in-chief. A titan in close with 10 tackles, 15 contested possessions and eight clearances, none of it was flashy – except a monstrous goal from outside 50 in the first term – but it was critical to the Bombers matching, if not shading, the year’s most impressive midfield at the coalface.

There are good foundations at the Bombers, despite the gloom of a 2-10 start: I’d say injuries and a rough fixture courtesy of their finals appearance last year are bigger factors in their poor record than just being a bad team. A fully fit Stringer next year, or even later this year, should give them more dynamism around the ball, allowing them to whisk the ball straight from centre bounces and target Wright one out rather than the slower builds of this year enabling the opposition to flood back.

Even as the Blues’ midfield began to get on top after half time, eventually shading the clearances 35-32, the Bombers held firm. 75 tackles for the night – their season average is 46, ranked last – told of their desperation, perhaps fuelled by the occasion: but there’s that Riewoldt quote again to consider.

It was enough for Michael Voss to give the Blues a massive spray at three quarter time, but the result was never in doubt: the Bombers kept pressing but lacked the know-how to capitalise on the fading Blues, Carlton were stoic in keeping them at bay, and a goalless final quarter was the result. It was ugly footy, but the Blues had done the groundwork to earn it.

I usually don’t pay much heed to off-field happenings in this piece, but I feel compelled to at least make a point about the Bombers’ pre-match 150th anniversary celebrations, which in my eyes sort of sum up why the club has been treading water for nearing on 20 years now.

It was cringeworthy at times – Adam Briggs did his best but his master of ceremonies gig seemed to pull focus from the actual ceremony too much for my taste – but no doubt Dyson Heppell’s pre-match speech to current and past Bombers alike was stirring stuff. So was the unveiling of those past legends, from Gavin Wanganeen, to Matthew Lloyd, to the Danihers – seeing Neale Daniher will never not be great – to James Hird, eliciting the biggest cheer of the night.

Here’s the problem, though: why, on the 150th anniversary of the Essendon Football Club, are these modern greats the centrepiece of the night, and not – y’know – the 16 premierships?

As a Bulldogs fan, I know all too well why some clubs create a bit of a cult of personality around their greats – there’s not much else to celebrate. For years, the Bulldogs hung giant posters of our 300-game players at Marvel Stadium home games, because we had only one premiership and it’d look silly to put that up. So it felt baffling to see the Bombers, the equal most successful club in the history of this competition (and yes, the VFL is a continuation of the AFL) keeping all but one of their premierships under lock and key and making some modern greats the star of the show, especially when commemorating 150 years worth of history.

Maybe that’s the reason why the Bombers continue to roll out Kevin Sheedy and co. to undertake club reviews, rather than seek some new, modern ideas as to what can be better. Maybe that’s the reason why Adrian Dodoro has targeted players with proven star power, from Jake Stringer to Devon Smith to Dylan Shiel, rather than those who can actually fill the gaps in the team.