The whole country appeared disappointed that Erin Phillips didn’t manage to kick a goal in her 50th game – which also happened to be Port Adelaide’s first-ever victory against the Swans on Saturday arvo – but not me,

I was just over-the-moon excited about the role she now plays within her team and how it will hopefully change the AFLW competition forever.

You might know Erin Phillips for being the only AFLW player to win two best and fairest medals. Or for being captain of a premiership-winning team twice. Phillips even won a FIBA basketball gold medal in 2006 among myriad other unbelievable achievements.

She’s currently the captain of Port Adelaide and is an incredibly accomplished athlete. If you’re unaware of who she is at this point, you need to get out from underneath that rock you’ve been living under.

Phillips has nothing left to prove, and the optics of her moving to Port Adelaide after a six-year career with cross-town rivals Adelaide appeared from an outsider’s perspective to simply set her up for a coaching role once she’s finished playing.

Of course she still had the connection with her dad and the club. Greg Phillips was an eight-time premiership player for the Power and is an Australian Football hall of famer. But the question from the beginning of the season remains.

Was this just a victory lap? Was Erin going to contribute in any facet to this new team? Was she going to retire after a terrible losing season and tarnish her immaculate legacy?

My personal belief was that Phillips was done. She looked ready to retire and spend more time with her young children and family. She has literally nothing left to accomplish and nothing left to prove. That’s not to say that I was hating on her decision or doubted her abilities; it was just my assumption that she would want to hang up those tired, weary cleats.

But you know what they say. When you assume, you make an ass out of u and me. And Erin is poised to make the biggest ass out of me. 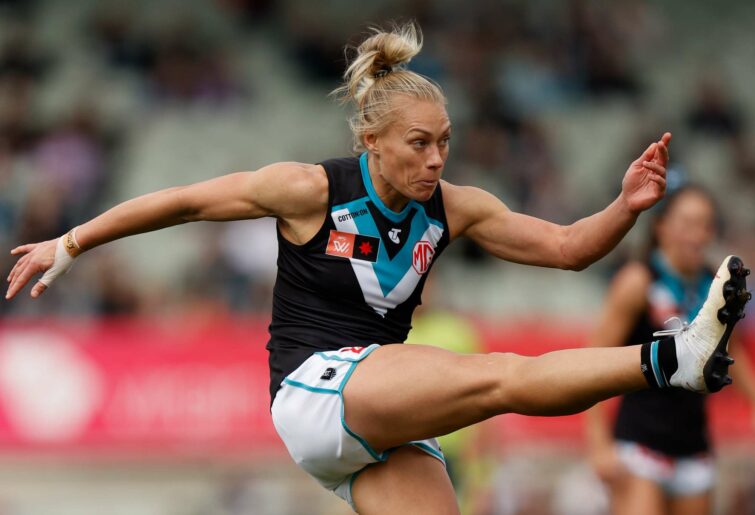 MELBOURNE, AUSTRALIA – SEPTEMBER 11: Erin Phillips of the Power kicks the ball during the 2022 S7 AFLW Round 03 match between the Carlton Blues and the Port Adelaide Power at Ikon Park on September 11, 2022 in Melbourne, Australia. (Photo by Michael Willson/AFL Photos via Getty Images)

I first noticed Erin’s new role when gleefully sitting in the iconic stands at Ikon Park in their Round 3 clash with the Blues, which they drew. She officially lined up at half-forward, similar to the position she used to play when she was with the Crows. But this was no stereotypical half-forward role I was about to witness.

I kept a keen eye on Erin all game, mostly because I was eager for her to kick her first goal for Port, and there was the opportunity for me to tell my children I was sitting in the stands when it happened. Of course the goal never eventuated, but I observed anyway.

For context, Phillips is listed as the third-highest goal scorer of all time in the AFLW competition, with 50 total goals. She is only behind Darcy Vescio and Cora Staunton on the all-time scorer’s list and averages a goal a game. However, she is still yet to record a Port Adelaide goal.

If I had to guess at the start of the season how many games it would take for the great Erin Phillips to kick her first goal of season seven, I would have confidently answered one. And yet we’re four games in and she’s yet to even really trouble the score card, securing a measly two behinds all season.

But the coach of Port Adelaide, Lauren Arnell, is not using Phillips to score goals. They have other players for that.

Like Gemma Houghton, who is one of the greatest AFLW goal kickers of all time and only 28 years old. Houghton is unfortunately injured currently – she was sidelined with syndesmosis after the Round 2 game against the Doggies – but once she returns, it’s almost certain that she will lead Port’s goal kicking every season.

Youngster Hannah Ewings proved on the weekend that she can be and will continue to be a serious threat up forward, booting three goals in just her fourth game. Ewings looked electric, and although she still struggles with getting separation from her defender from time to time and has a lot of work to do on her hard-ball collection, the future is incredibly bright with her on the field. 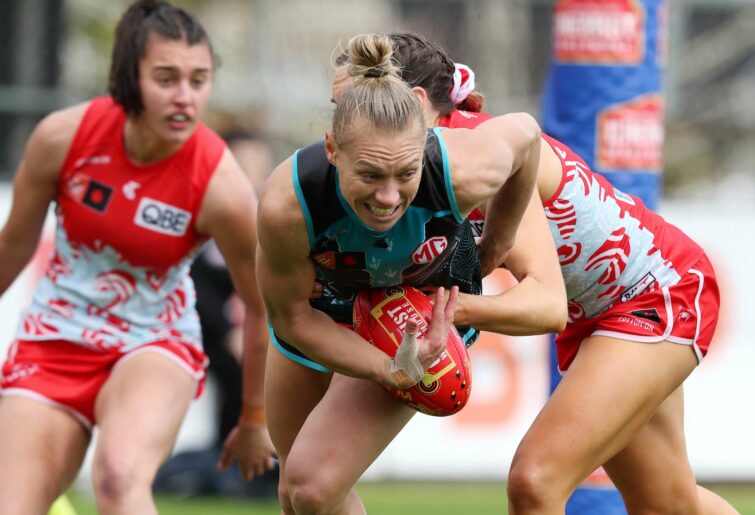 So what is this brand-new role that will (hopefully) completely change the way women’s footy will forever be played?

Well, it’s hard to explain. It’s really something you have to see to understand.

The basic premise of the role, from what I can tell with my very limited knowledge of AFLW schemes and strategies, is that Erin is playing a role somewhat similar to that of a point guard in basketball or quarterback in football. She facilitates every single play that goes forward but also ensures she is the last line of defence in the forward 50 to prevent the opposition from exiting into the middle of the ground.

Whenever the ball is moved forward by her defenders and midfielders, Erin is often first to the contest and fights hard to secure it. In many cases the ball is kicked directly to her. She will then find the best option forward and pass it to them, almost always hitting the target she intends to hit.

From there, she won’t continue on, looking for an easy handball or kick over the top to run into an open goal. She will stay behind her players in case the ball is rebounded out of Port’s forward 50.

Erin recorded five direct goal assists and eight score involvements from just 16 disposals against the Swans in their mammoth win. This is her bread and butter, doing whatever she can to facilitate her teammates to score goals. Do not be surprised if, at the end of season seven, Erin Phillips wins the goal assist tally by a landslide margin.

My guess is that her role at Port Adelaide is twofold. Behind closed doors she would be working tirelessly with her forwards, teaching them everything she knows, enabling them to become great, just like her.

But no-one will ever be just like Erin Phillips. There is only one Erin Phillips, and there will only ever be one Erin Phillips. And it’s crazy that even in year seven of her AFLW career, aged 37 years old, having been a professional athlete since she was 17, Erin is still finding ways to change and adapt her game to break the mould of what a half-forward should do.

Phillips is proof that, as humans, we should never stop learning and continue to try to better ourselves. Who knows, maybe the next thing you learn will be a skill that changes an entire industry for the better.

It is also my belief that the AFLW best and fairest medal should be renamed the Erin Phillips Medal. Hopefully this will happen once she retires – if she ever retires!

Maybe she still has the power to win one more Erin Phillips medal before she hangs ‘em up for good.

Tornado Cash’s Code Is Back on GitHub