Everything You Need to Know About EV Charging Stations

Unlike a gasoline-fueled car, one major perk of an electric vehicle is that you can plug it in at home or use an EV charging station when you’re on the go.

Plugging into an electrical outlet at home is one thing. But those EV charging stations popping up at the end of big suburban parking lots or in urban parking garages open up a world of questions.

Good news! We have answers and a reminder not to be afraid of what is admittedly a very different infrastructure for electric cars than what you are used to with gas cars.

Spoiler alert: Electric cars are a cinch to charge once you work out the basics.

First things first: Download a charging station location app to your smartphone. Every EV’s built-in navigation system can point you toward charging stations. But that is only half the battle. You will want the latest information, and many apps can tell you if the plugs are in use and if there is some fault with the station. This can save you tons of frustration.

Individual charging networks have their own apps. However, a widely used app is PlugShare, which relies on users to supply current information (pun intended) about charging stations. You’ll find out about any recent changes and developments. For instance, is the EV charger in a parking lot now under construction, or are those chargers temporarily off-limits or charging slower than usual?

PlugShare works with Android Auto and Apple CarPlay so that you can pull it up from most late-model EV touchscreens.

A good backup to download and utilize is ChargePoint. Sometimes it is easy to compare the two, and many users report that ChargePoint is more user-friendly than other apps.

Using the apps from charging station providers such as EVgo, Electrify America, and ChargePoint streamlines payment and allows for monitoring of your vehicle’s charging status.

Some public stations provide charging at no cost. But free EV charging stations are far less common than those requiring payment.

You may wonder just how much it will cost to charge an electric car at a public charging station.

Generally speaking, most charging stations will charge by the kilowatt-hour (kWh), the amount of energy transferred to the car’s battery. Unless it’s a free charger, the fee for the session is more than what it would cost to plug your electric car in at home. Most households in the United States pay an average of nearly 14 cents per kWh. It’s unlikely you’ll find many public chargers that offer to juice up your EV for less than that.

Fees at some public stations are priced per minute.

In many cases, individual station owners set charging prices. Just because there’s a ChargePoint network logo on the charger doesn’t mean prices are uniform. The charger at your local grocery store might not cost the same as the station in a nearby shopping center parking lot.

Some major retailers, such as Whole Foods, offer free chargers at many locations, though realistically, this perk is bound to expire at some point.

Additionally, most new car dealers offer free charging stations on-site, though their usefulness is dubious. For example, car dealership locations don’t tend to be in the most convenient areas. Also, dealers will need to use them for their cars. After hours, many dealers close gates that will prevent drivers from reaching those stations, too.

In short: Don’t expect to get by with free charging forever.

Still, it likely only costs a few dollars to add 100-plus miles of range to most electric cars, and that makes plugging in cheaper and greener than filling up with unleaded.

Battery size is a fundamental part of the charging-time equation. It makes sense that smaller batteries can charge to capacity faster than larger batteries. However, many variables affect charging speeds. The level of battery technology, the quality of the equipment (both the charger and the vehicle), and environmental factors such as the ambient temperature affect how fast EVs charge.

In broad terms, Level 2 charging stations charge at about 6 kilowatts (kW) or a little higher and can add about 20 miles of range in an hour of charging at home or using a public charging station.

DC fast chargers use high-voltage direct current to charge at 50 kW and up to 350 kW if the car can accept that rate. It’s not uncommon for EVs to gain 100 miles of range in about 30 minutes of quick charging.

Here’s another rule of thumb regarding the time you spend at an EV charging station: The last 10% of EV battery charging can take as long as the first 90%.

Pulling into a filling station that’s unable to pump gas is an uncommon situation. Unfortunately, finding an EV charging station that’s out of order is not newsworthy. A study from the University of California Berkeley found significant reliability issues with fast chargers in the Greater Bay Area.

Charging networks claim uptime rates of 95% and higher. However, the study found almost 23% of 657 DC fast chargers in the nation’s biggest EV market were nonfunctional. The chargers were out of order because of “unresponsive or unavailable touchscreens, payment system failures, charge initiation failures, network failures, or broken connectors.”

Unlike their gasoline counterparts, EV charging stations rarely have an attendant watching over the equipment to help keep it operational. As a result, the public charging infrastructure has plenty of room for improvement.

To its credit, Electrify America ranked highest among EV charging networks in user experience in a 2021 study by Umlaut, an engineering services firm owned by Accenture. The study considered app usability, charging locations, and ease of completing a charging session.

How to Use a Car Charging Station 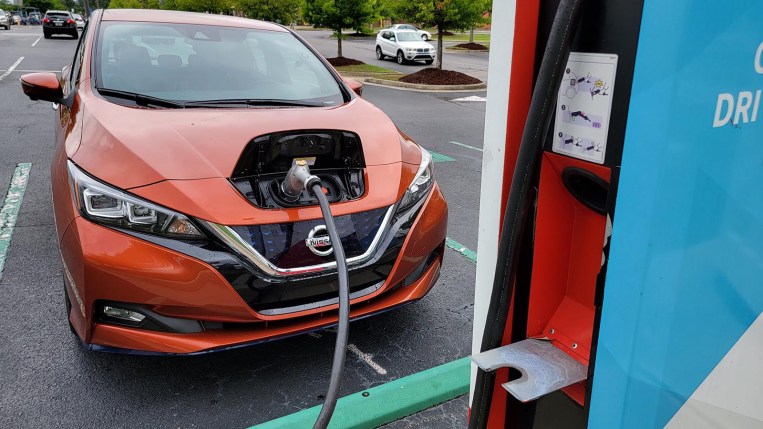 Most public EV charging stations will require you to sign up for an account, though this is simple enough. These networks will store your credit card on file and typically give you a card to wave in front of the charger to activate a charging session. Hint: Keep that card in your glove box or center console.

From there, charging couldn’t be more effortless — and cleaner.

Pro Tip: Find a charging station near a restaurant or coffee shop, should you need to whittle away time.

A display at the charging station will show you how much electricity (and how much money) you’ve added to your electric car. And there will be a clearly marked phone number you can call if you have any questions or need assistance.

Tesla’s Supercharger network offers DC fast charging, but only to that automaker’s vehicles. And that brings up an important note for Tesla owners. To use a non-Tesla charger, you will need an adapter available for less than $100. Non-Tesla vehicles can use Tesla’s Level 2 Destination Chargers.

How to Install a Car Charging Station at Home

The most convenient places to top off are the places where your electric vehicle will be parked most often: home and work. At home, you’ll want a Level 2 charger, which requires 240-volt power reasonably close to the car.

Drivers who park in a private garage or even a driveway will likely have no issues. The 240-volt electricity is generally easy to add to a garage. The plug needed for a charger is the same as an electric clothes dryer.

A brief survey of electricians across the country found an average installation cost of around $250 for a 240-volt outlet. However, numerous factors can make this estimate more expensive. That said, many new homes get built with accommodation for electric cars.

From there, you will need to pick out a charger — plan to spend between $400 and $700. The charger plugs into your new 240-volt outlet and features a cable that plugs into your car. Longer cables are available for most chargers for drivers who need the charger inside a garage but must park outside.

Drivers who park on the street or use apartment garages may need to come up with another solution. Municipalities generally frown upon a charging cable stretching across the sidewalk to a car, and installing your charger in a multistory garage is, of course, a no-go.