St George Illawarra overcame Francis Molo being sent off to kick clear of Gold Coast 46-26 on a sunny afternoon in Wollongong.

Molo’s dismissal in the 62nd minute, earned through a horror high shot on Patrick Herbert, was a rare moment of defensive intensity in a game defined by how poor both teams were in the tackling department.

There was a strong end-of-season feeling about the whole affair. Neither side is able to make finals, and on this showing, it isn’t hard to see why: both seemed to consider tackling optional and combined for a series of poor errors.

When outbreaks of quality occurred, it was hard not to see them as enabled by the poor line speed and decision-making of the Titans’ defence. They managed to concede three tries, scoring none, against the 12-man Dragons.

Ben Hunt and Tino Fa’asuamaleaui were, as ever, excellent, while Tautau Moga grabbed a hat-trick and Junior Amone showed a few flashes, adding two tries to the three he scored last weekend in Canberra.

Both sides suffered badly from injuries: the Dragons lost Andrew McCullough and Moses Mbye in the first 20 minutes, while the Titans had two players depart with concussions in Philip Sami and Herbert.

The Titans lost Sami in the opening moments to a head knock and found themselves almost immediately behind, as Amone touched down after a dubious offload from Zac Lomax.

The Gold Coast struck back through AJ Brimson, before Moga put the Dragons back ahead. They then lost McCullough and Mbye to injury, reducing their bench to just two with more than an hour to play, but edged further in front with a superb team try on the right for Mat Feagai.

Jayden Sullivan got another through horrendous defending, but the Dragons proved just as guilty themselves, allowing David Fifita to cross. The scoreboard was rattling along, with the Titans able to reduce the gap further on the stroke of half time via a penalty goal.

St George Illawarra got the first of the second half with Jack Bird scoring, but Beau Fermor struck back after a long, chaotic passage of play.

Amone got his second through a pathetic attempt from Jarrod Wallace and to crown a stellar ten minutes for the art of tackling, the Dragons attempted a short dropout that landed in Titans hands and got Jojo Fifita over. 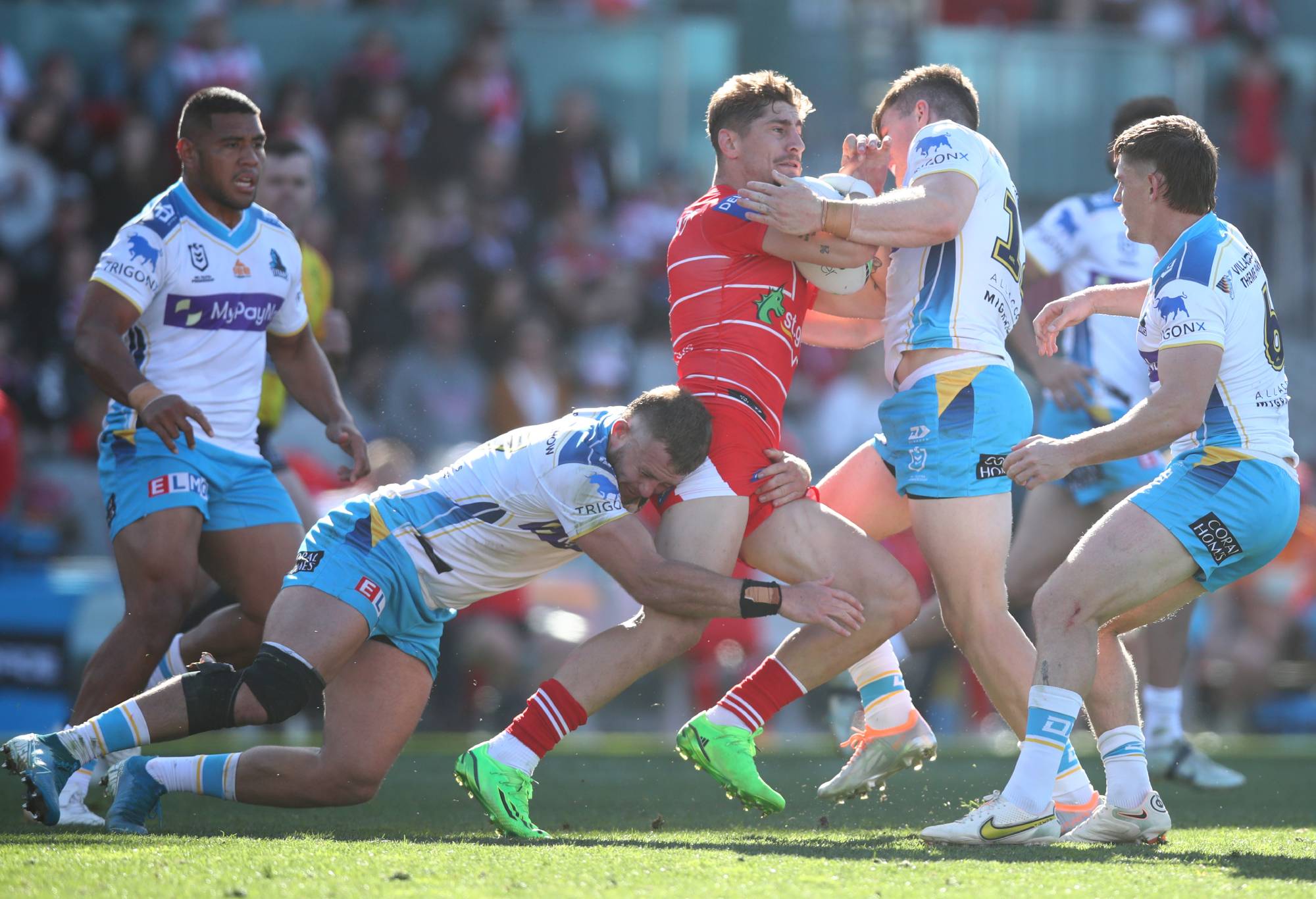 Molo was then dismissed, ending Herbert’s game and his own season in the process, with a long suspension undoubtedly incoming.

Not that you would have noticed who was a man light: the Gold Coast twice conspired to look like it was them a man light, allowing Moga in for the second and third of his set, before Bird was allowed to catch a crossfield kick untouched and finish a high-scoring afternoon.

All eyes on Blues and Pies as Dogs ask the question, Freo’s top-four fate hangs in the balance

Raiders come back from the dead to keep their season alive