I’m expecting to see plenty of takes in the coming days, both from those paid to watch the game and those paying to watch, that claim Geelong’s win over Collingwood in the qualifying final was typical of these ‘new Cats’.

It works well for the narrative, after all: the first week of finals hasn’t been kind to this team, and after a start from the ages from the Pies, there seemed an even money chance from virtually start to finish that this match might not end well for the favourites.

It’s a pretty fair assessment. Geelong teams of years gone by would have been absolutely steamrolled by the suffocating wave of pressure, devil-may-care attacking football and relentless attack that the Pies produced at the MCG.

This team was good enough to respond to a first-quarter onslaught, wrest the game back onto their terms, and find a way to keep themselves in the match despite being denied every single one of their usual strengths.

Sometimes there is no shame in just getting beaten to a better side, especially when you’ve been taken for granted as being simply ‘lucky’ for far too long this season. This was a finals performance for the ages for Collingwood. Defeat or not, there is officially no limit to what they can achieve in this more extraordinary of seasons.

Beating the Cats in a final usually begins at, well, the start. Nothing sums up their decade of September disappointments than their frequent first-quarter struggles, often beset by the increased intensity of finals footy and unable to get the game under their control.

Across their last six finals in week one – they lost the first five comfortably – they’ve kicked just five first-quarter goals. Only one of them came on Saturday.

It’s also where, in fits and spurts, the Cats have been vulnerable even this season: when their midfield is exposed, goals can come in a rush.

The Cats’ defence mostly held firm in the opening term at the MCG – but that’s about all they could take away from the start. It was painfully obvious from the opening minutes that the Magpies had dialled the pressure meter up to 11, and just as apparent that Geelong had no real means of coping with it.

Sydney containing Melbourne to equal contested and uncontested possession counts on Friday night was hailed as an extraordinary feat: the Pies did it all over again.

Just 33 uncontested possessions (they had 34 contested) and 14 marks is as un-Geelong like as it’s possible to be. Even this year, where the Cats have moved away from the dour, controlled style that became their modus operandi for a number of years in favour of speedier ball movement, they still by and large take marks by the boatload.

It took until the 11-minute mark to get their first uncontested mark. Unheard of.

Without being able to control the footy the way they usually do, the turnovers arrived: 19 in total to quarter time, under the blanket of suffocating pressure. The official rating had the Pies at a monumental 208; the Cats just 180.

Patrick Dangerfield marking in midfield, turning on a dime and sending a left-foot pass straight down the throat of Darcy Moore 30 metres further afield was the prime example. Dangerfield had time, space and options to dispose of; the Magpies rushed him as much from the previous 15 minutes of play as anything they could do in the moment.

With a 4-0 advantage from the centre bounce – helped out by Brayden Maynard’s presence at the occasional one and bringing his usual uncompromising attack on the ball – the Pies found themselves more capable of dictating terms. This has often been the killer for Geelong in finals past, particularly against Richmond: against an opponent going at full bore, they’ve frequently been unable to respond in kind.

In contrast, the Magpies were flooding back superbly; a key to their game this season has been their ability to bust a gut defensively, deny easy goals, win the ball back, and switch from defence to offence like turning on a light.

They take the ball coast to coast with great effect, defying the stat that had them, going into this match, as the first team in the competition for kicking efficiency (62.5 per cent). Craig McRae has found a way to nullify that, by ensuring the Pies are in perpetual motion: if a kick misses the target, or a fumble is had, someone else arrives on the scene to either win the contest or force a draw. And on it goes.

It helps, though, when your best kickers have the ball on a string: with nine touches apiece to the first break, Josh and Nick Daicos were involved in everything.

The old Geelong would have been unable to turn the tide. New Geelong could.

The Cats, still unable to break clear of the Magpies’ pressure, decided to fight fire with fire. Their own pressure rating rose, their midfielders began to dominate the contest – they won 34 ground balls to 19 for the second term – and slowly but surely, the momentum swung.

With nine of 10 inside 50s caused by a clearance domination – Patrick Dangerfield heavily involved with five clearances of his own – the Cats’ swathe of forwards began to involve themselves. Jeremy Cameron’s kicking inside 50, stationed across half-forward and sweeping across the ground, was a delight; as was the work of Max Holmes off a wing, nailing Josh Daicos in a superb run down tackle and providing drive aplenty.

It took a nerveless strike from Will Hoskin-Elliott after the siren to restore the Magpies’ lead, by a solitary point. It felt every bit as tight as that.

By the third term, the Magpies’ pressure had shifted from overwhelming to merely excellent; and a team as good as the Cats could sniff out the difference. Having failed to win a single inside 50 from a chain beginning in their defensive half, they managed three by halfway through the third term.

Tom Stewart’s calm head and organisation behind the play was beginning to have an impact; largely kept in check by the Pies’ battery of dangerous forward options in the first half, his intercept play was never at its most damaging; but the Cats love the ball in his hands for a reason.

They still weren’t taking marks – just 46 to three quarter time – but the lift in pressure saw the Pies’ kick efficiency fall to 46 per cent midway through the term – poor even by their standards. With 60 tackles to 61 by three quarter time, little wonder targets became hard to hit.

It’s at this point that we ditch talking about structure and start talking about heroes. Because in that final term, there were stacks of them.

We could talk about Darcy Moore – five intercept marks to half time playing on probably the most monstrous key forward of them all in Tom Hawkins, keeping him to two kicks, one goal and no influence for the match. We could chat about Cameron Guthrie’s clean hands and cool decision-making when the kitchen was at its hottest.

Cameron and Ash Johnson’s incredible finishing from the boundary line.

Scott Pendlebury’s unmatched composure, and how time stands still whenever he touches it.

But instead, this last term was about the most divisive figures on the ground: Gary Rohan for the Cats, and Jordan De Goey for the Pies. 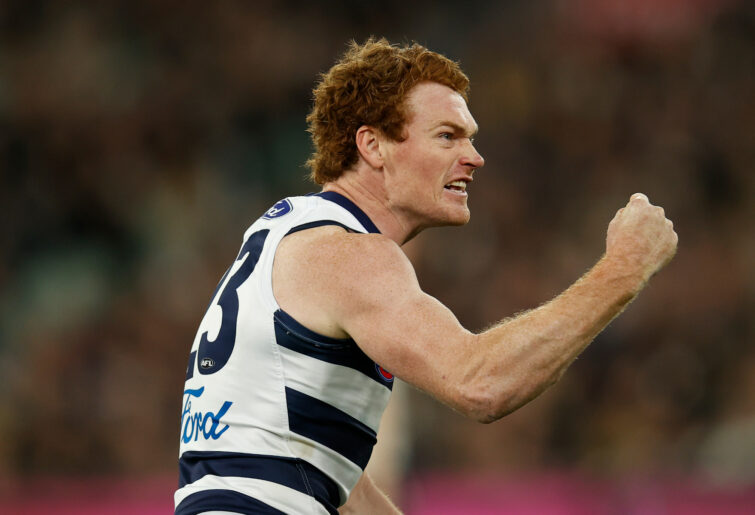 Gary Rohan of the Cats celebrates a goal. (Photo by Michael Willson/AFL Photos via Getty Images)

De Goey had already had a serious match: with eight clearances by full time, he was the dominant midfielder on the ground from start to finish.

He might never be a true accumulator like a Lachie Neale, but it was quite incredible how a player whose one wood has always been his explosiveness was able to modify his game to still impact a game that never allowed either he or Dangerfield to break clear.

By the last quarter, though, things had opened up enough for De Goey to show his other knack: goals at big moments

I can’t speak highly enough of his two goals, each seemingly dragging the Magpies over the line when he kicked them. Gathering loose balls and kicking with only milliseconds to spare before being surrounded by Cats, neither ever looked like missing.

I’ve said plenty about De Goey’s off-field behaviour this year and in years gone by; but only the most skilled, clutch footballers could nail those shots, never mind both of them.

In the end, though, he was overshadowed by the most unlikely hero we’ve seen in a final perhaps since Shane Ellen in 1998. Gary Rohan is a finals meme by this point; he trends on Twitter with captions of one-disposal games so frequently at this point that it’s almost expected.

Chris Scott defended him staunchly during the week, and the general consensus was that he never really got the ball that much in the home-and-away seasons for there to be that much of a drop-off.

Tonight, though, somehow made it clear just why there were so many mocking messages about his finals performances. THIS is what he can do.

Dangerous early, with much of the Pies’ attention focussed on the killer trio of Cameron, Hawkins and Tyson Stengle, Rohan popped up in the first minute with a strong mark inside 50. He’d miss the kick – but the tone was set.

He never took the game by the scruff of his throat, but he never needed to: he always looked dangerous when the ball went near him, his hands were incredible all night long, and his kicking from the first minute onwards was exquisite.

His mark in the final minutes, leaping over a pack around the 50m arc with his team down, was described as ‘Carey-like’. His nerveless kick, making the distance with ease and never deviating, was even more so.

The last minute summed up so beautifully how much the tables had turned for him. Under a high ball inside 50, having marked everything all day, Gary dropped an absolute sitter.

With the Pies’ run of luck this year, and given his own finals failures, you instantly braced to see a man’s heart ripped out.

But the footy gods were kind: Rohan kept his head, gathered the loose ball at ground level, dished off a handball to Max Holmes in the goalsquare, and hey presto, the Cats were in front.

They’d lock down from there, with a six-point win as special as any they have achieved under Scott. It was just so fitting that the poster boy for their finals failures, who has endured more flak than any of his more high-profile teammates for the Cats repeatedly hitting the wall in September, was the match-winner tonight.

No one would have suspected the Magpies would be taken down by Gary Rohan. But such is the beauty of finals: anything can happen.

Bizarrely, a close loss, breaking their incredible run of victories in tight moments, might be the best thing for Collingwood. They took it right up to the clear best side all year, the luck didn’t go their way this time… and they’re still alive and kicking in 2022.

Watch out, Sydney (and Fremantle or the Western Bulldogs, too). These Magpies haven’t fired their last September shot just yet.

Matildas squander chances, going down to Canada during international friendly