Gen Z football, finance and futures: Why we should rethink player ‘loyalty’

There’s an oddity in the AFL, compared to non-sporting professions, that the most in demand candidate for a position, a draftee, gets ‘rewarded’ with a job at the weakest, on field, performing organisation.

To this, the current plight of young North Melbourne rising star and prized recruit Jason Horne-Francis presents an interesting case study. Signed to the club on a standard two-year rookie contract, speculation continues to heighten on his future.

As Gen Z, those born between the years of 1997 and 2012, become the core demographic of the league, perhaps we need to adjust our thinking when it comes to workplace culture, job mobility and players choosing to change clubs.

Zooming out of the microcosm that is the AFL industry and looking at society more widely, the Foundation Of Young Australians ‘New Work Order’ series found that career pathways for young people look very different to those of their parents.

Research found that, “instead of a few jobs across a single career pathway, it is estimated that a young person today will have approximately 18 different jobs over six different careers in their lifetime.”

Further, due in part to the COVID-19 pandemic, recent ABS data found that during the year ending February 2022, 1.3 million Australians (9.5% of employed people) changed jobs. This was the highest annual job mobility rate in a decade.

So what does this have to do with the AFL and present and future draftees?

Gen Z are characterised as ambitious, self-reliant, pragmatic, entrepreneurial and empowered, yet the AFL model they are thrust into doesn’t necessarily provide the same synergies and alignment.

UK consulting firm Deloitte suggests “Gen Z will have the ability to demand greater personalisation in how they move along their career journey.”

Addressing this, they suggest, “for organisations to attract and retain the best and brightest of the generation, it will require a different mindset.” The AFL is one organisation that will benefit from such adjustments.

Despite little agency or autonomy in the early stage of their career, these young athletes, still in their teens, are thrown into the deep end and out of their comfort zones, often moving out of home and interstate, away from friends and family, and transitioning from full time secondary school studies to full time employment- football, at a rapid pace.

There is no dispute they are generously compensated for the privilege of playing full time football with well above national average wages. SANFL head of talent Brenton Phillips told SEN last year that picks 1-20 are “on a base salary of $105,000 a year,” as well as “a bonus on top of that in terms of $4,000 per game.”

But sometimes the income doesn’t match the outcome.

Add to that public scrutiny, social curfews and the increased professional demands on players.

A player’s time at the highest level is finite. AFL Players Association research found that, “every year approximately an eighth of the workforce leaves the game,” and that the average career length of an AFL footballer was approximately six seasons.

Given the majority of players enter the profession at the age of 18, this means many will exit the league before they even turn 25.

Tom Boyd is one such example. Drafted as pick number one in 2013, Boyd played just 61 games before retiring at the age of 22 due to the intense physical and emotional toll. “I just don’t have the desire to play or the enjoyment of the game I used to have,” he said in a press statement at the time. 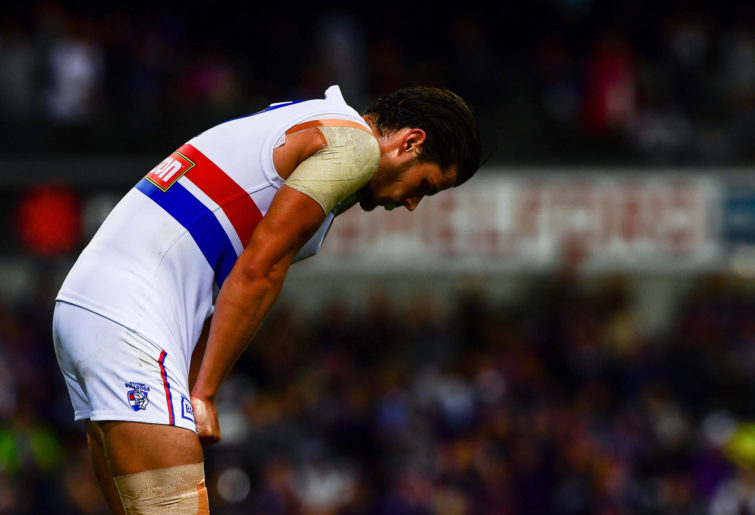 Does the AFL need to do more for players like Tom Boyd? (Photo by Daniel Carson/AFL Media/Getty Images)

The AFL media and fans alike need to make sure they exercise the same empathy around mental health and wellbeing issues as they do to players’ respective futures, as often the two are intertwined.

Yes, contracts exist, but with professional, amicable and negotiable discourse, they become effectively non binding. In the long run, the swings and roundabouts of the draft works both ways and the way club’s treat their players, their most vital employees, shapes the culture of the organisation.

It’s commonly suggested that the greatest reasons people leave their employer is because they want change, based on poor working conditions, for greater opportunities, better values alignment or for family reasons. One could argue, Horne-Francis may well fit into all the aforementioned categories.

But it is not up to us to project moral decisions.

There is more to football than to “pass the time away,” “just for recreation’s sake.” In the case of Horne-Francis and the many in his situation to come, they must put themselves, their health and happiness and their future first, and make the decision that is right for them.

It will take courage and inevitably draw backlash, but in the long run will enhance their careers, on field performance and, ultimately, lives. We, as fans, can not begrudge them for that.

If we want personalities in the AFL, it’s time we humanise players and that can start by treating them like members of society.

After all, football is just one part of their life.

Why the Wallabies lost and how they can turn it around

Winston, we have a problem