And then there were two.

It promises to be one of the most tantalising Major finals in recent history as Djokovic comes up against one of the most polarising characters in the game, with Kyrgios appearing in the biggest final of his career at 27 years of age.

A major subplot of the match is the fact that the Australian has won both of their career meetings, in consecutive tournaments at Acapulco and Indian Wells, though those came in 2017 when the Djoker endured one of his worst seasons since winning his first Major title in 2008.

Amazingly, Kyrgios won both of those matches in straight sets, and faced not one single break point in either match.

The Canberran will go in refreshed and raring to go after receiving a walkover into the final when his would-be semi-final opponent Nadal was forced to withdraw due to an abdominal strain he suffered in his quarter-final stoush against Taylor Fritz.

There was talk that Fritz should have been allowed to assume the Spaniard’s place in the semi-final, but the player himself dismissed those suggestions, saying “he wasn’t good enough on the day”.

Beforehand, Kyrgios endured five-setters against Paul Jubb and Brandon Nakashima in the first and fourth rounds respectively, but was also at his explosive best against Filip Krajinovic, Stefanos Tsitsipas and Cristian Garin, battling a shoulder problem against the latter. 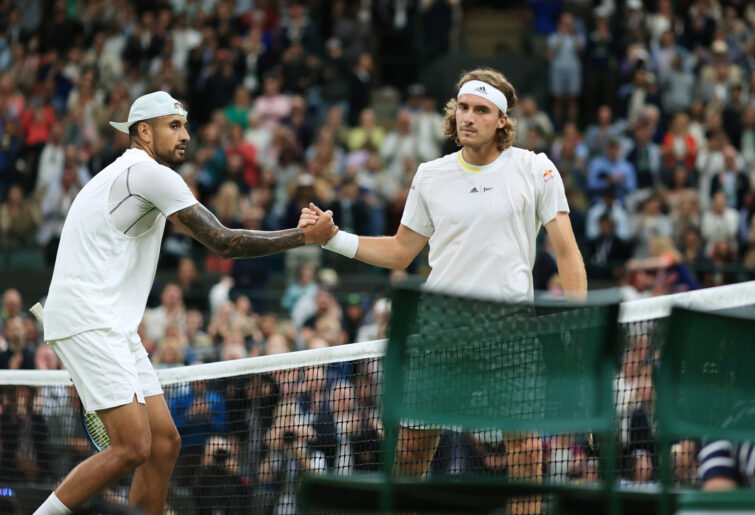 Nick Kyrgios shakes hands with Stefanos Tsitsipas after their third round match at Wimbledon. (Photo by Simon Stacpoole/Offside/Offside via Getty Images)

Against Krajinovic, the 27-year-old faced not one single break point while against Tsitsipas, despite some mid-match drama as you would expect in a Kyrgios match, he also didn’t drop serve.

He now enters his first Wimbledon final with the hopes of a nation on his shoulders, hoping to become our first Major men’s champion since the great Lleyton Hewitt in 2002.

He is also the first man from Down Under to reach the final at the All England Club since Mark Philippoussis became the first man to be beaten by Federer in a Major final, back in 2003.

On the opposite side is Djokovic, who along with his comraderies Nadal and Federer continue to break records and dominate the Grand Slam stage at the expense of the up-and-comers, as we have seen all too often.

After a rough start to the year including being deported from Australia on the eve of the Australian Open as well as losing to Rafael Nadal in the quarter-finals at Roland Garros, here lies possibly the only chance for the Djoker to claim a Major title this year.

The Djoker emerged through two four-set matches in the opening rounds, in between which he easily dispensed of Thanasi Kokkinakis and countryman Miomor Kecmanovic in straight sets.

Then, in the quarter-final against Jannik Sinner, the Djoker had to display all his fighting qualities coming from two sets to love down to defeat the Italian and keep his chances of Grand Slam title No.21 alive.

In the semi-final he had a whole nation against him as he faced Cameron Norrie, who had become the first local since Andy Murray in 2016 to get this far at the All England Club, but nonetheless came from a set down to book his place in a record 32nd Major final.

Djokovic said following his semi-final victory that there promises to be fireworks when he faces Kyrgios, one of the most polarizing characters in the sport, in Sunday’s men’s final.

For Kyrgios this will be his second shot at Grand Slam glory this year, having teamed up with Kokkinakis to win the men’s doubles at the Australian Open earlier this year.

However, facing Djokovic, one of the game’s greats, in a Major singles final will be a different proposition altogether and it will take more than his best form if he is to cause an upset and take down the Djoker who owns a 20-11 record in Major finals.

Now that you’ve got all the background information above, it’s time to crunch the all-important statistics below.

The stats that matter
* This is Novak Djokovic’s 32nd Grand Slam final, and eighth at Wimbledon. He has now overtaken Roger Federer (31) for the most appearances in a Grand Slam men’s final in all history.

* This is Nick Kyrgios’ first Grand Slam final. He is the first Australian to reach a Major final since Lleyton Hewitt at the 2005 Australian Open, and first at Wimbledon since Mark Philippoussis in 2003.

* Kyrgios is aiming to become the first Australian man to win a Major title since Hewitt at Wimbledon in 2002.

* Kyrgios is the first unseeded man to reach a Major final since Jo-Wilfried Tsonga at the 2008 Australian Open, and first at Wimbledon since Philippoussis in 2003.

* Kyrgios is the oldest first-time Major finalist since Kevin Anderson (aged 31 at the 2017 US Open). He is also the lowest-ranked opponent of Djokovic in a Major final (Tsonga was ranked No.38 when he reached the 2008 Australian Open final).

* Kyrgios is the only active player who has never lost to Djokovic in more than one career meeting. In both of their clashes, Kyrgios has won in straight sets, not facing a break point in either win, though their last meeting was at Indian Wells in 2017.

* Djokovic is aiming for a 21st Major title, and seventh at Wimbledon; the latter would see him just one behind Federer for the most titles at the All England Club in the Open Era.

* Djokovic is 3-0 against first-time Major finalists (Tsonga, Tsitsipas and Berrettini), and of all the opponents he has faced in a Major final, has only never beaten Wawrinka (0-2).

* The only Australian to have defeated Djokovic at a Major was Lleyton Hewitt at the 2006 US Open.

In America, Cancer Patients Endure Debt on Top of Disease