Ding! Ding! Round One. The whirligig of time certainly brought in its revenges for the Southern Hemisphere in the opening round of July Tests. It was a 4-0 clean sweep for the Rugby Championship nations against the cream of the home unions.

On the 2021 end-of-year tours, the balance had been reversed, with Six Nations sides (excluding Italy, of course) winning the war against the Rugby Championship countries by eight wins to three. France, Ireland and England all navigated the entire November course unbeaten.

A global season cannot come soon enough. The balance of power between the hemispheres is now so fine that, whether is it the north flying south in July, or the south migrating the other way in November, the odds are heavily in favour of the home teams. Whoever does the travelling at the end of a long season, tends to lose.

In November, Ireland dispatched New Zealand much more convincingly than a 29-20 score-line suggests, at Eden Park in the first Test the All Blacks paid the men in green back in full with a handsome 42 points to 19 victory. Ireland’s high-energy, high-intensity multi-phase game needs freshness and resolution in order to succeed, and in Auckland it did not have quite enough of either.

The stats show that Andy Farrell’s charges had more territory (60%) and possession (58%). They enjoyed six more minutes on attack than their hosts, building an extra 40 rucks and making 63 fewer tackles in the process. Nonetheless, it was the All Blacks who controlled most of the action.

How can Ireland find enough improvements to get a foothold in the series at the Forsyth Barr in Dunedin next weekend? First of all, they need to get far more out of their time in the opposition red zone. They spent a massive nine and a half minutes in the All Blacks’ 22 at Eden Park:

A return of under two points per visit is not quite good enough at this level. One law change has had a major difference: from a five-metre scrum to the attack, to a goal-line dropout to the defence when the ball is carried over the line but not grounded. It benefited the All Blacks immensely.

On no less than five occasions the ball was held up over the New Zealand goal-line, and on another two occasions centre Rieko Ioane made try-saving tackles – the first on replacement outside-half Joey Carbery:

In real time it looks like a fair try and a potential high tackle by Ioane, and indeed English referee Karl Dickson’s on-field decision was to award the score. That means there needs to be conclusive evidence for the decision to be overturned.

The incident raised two highly topical points of law. Firstly, TMO Marius van der Westhuizen ruled out the grounding in the following terms: “The player is not in control of the ball and he has not pressed it.” Under the current officiating guidelines, there has only to be no visible separation between carrier and ball as he makes the plant: 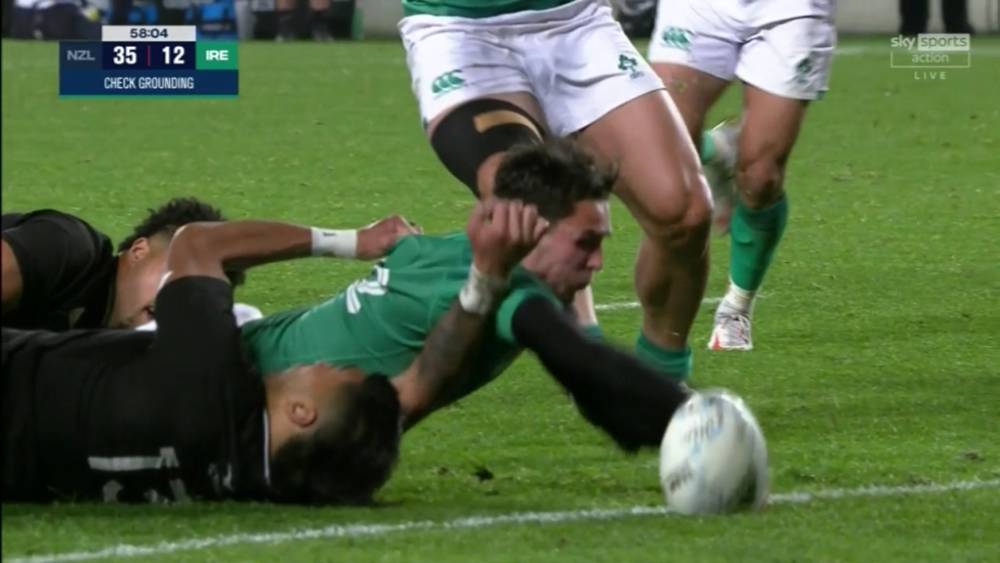 Carbery did not need to be in control of the ball or ‘press’ it for the score to be awarded, he just needed to remain in contact with it – so, there did not appear to be enough contrary evidence to reverse Dickson’s original decision.

The second question centred around whether Carbery was denied by a high, over-the-shoulder tackle by Rieko Ioane – the so-called ‘seatbelt’ tackle:

There has been a recent change of course by World Rugby here. The automatic penalty has been swapped out for a new interpretation: “since March, referees have been given a new guideline for ‘seatbelt tackles’ that where the tackle is above the shoulder-line, but there is no contact above the head or neck, the referee can call ‘play on’ and it is no longer deemed a penalty offence.”

There is no dangerous contact with head or neck, so Rieko did not commit a foul and made a fair tackle. On the very next sequence, he dislodged the ball from Josh van der Flier’s grasp and prevented another seven-pointer.

At one point in the second period, the camera swung around to highlight icon Richie McCaw watching from the stands, and it was potent symbolic moment. The All Blacks showed a lot more street nous in their attitude to the breakdown than they had back in November in Dublin – perhaps so than at any other time since the McCaw era. It was like a nostalgic throwback to McCaw’s clever exploitation of the ‘grey area’ at the ruck!

The Kiwis read the referee exactly right in their preparation and pushed the level of off-the-ball obstruction at the breakdown to the limit:

The tackler (Sevu Reece) rolls into Ireland scrum-half Jamison Gibson-Park, rather than away from the tackle, while Quinn Tupaea looks to run the first Ireland cleanout support (Hugo Keenan) out of the play entirely, and Ardie Savea crawls after the ball on the ground as the first man in.

Karl Dickson only took definite action against this policy in the dying embers of the game, yellow-carding Karl Tu’inukuafe in the 79th minute:

By then, the damage had been done:

Sam Cane delivers a subtle-but-significant shoulder to bump Caelan Dorys off course as he tracks to the cleanout, and that is all that is needed to enable the turnover. Beauden Barrett puts in an exquisite short kick for Tupaea to wrap up a typical vignette from the game.

Ireland’s coaches have a lot of work to do in their meetings with second Test official Jaco Peyper this week in order to give themselves a shot at turning over a very good New Zealand side. They will also want clarification at the scrum, where George Bower was permitted to pack so far outside Tadhg Furlong that the Irishman could not even complete his bind! 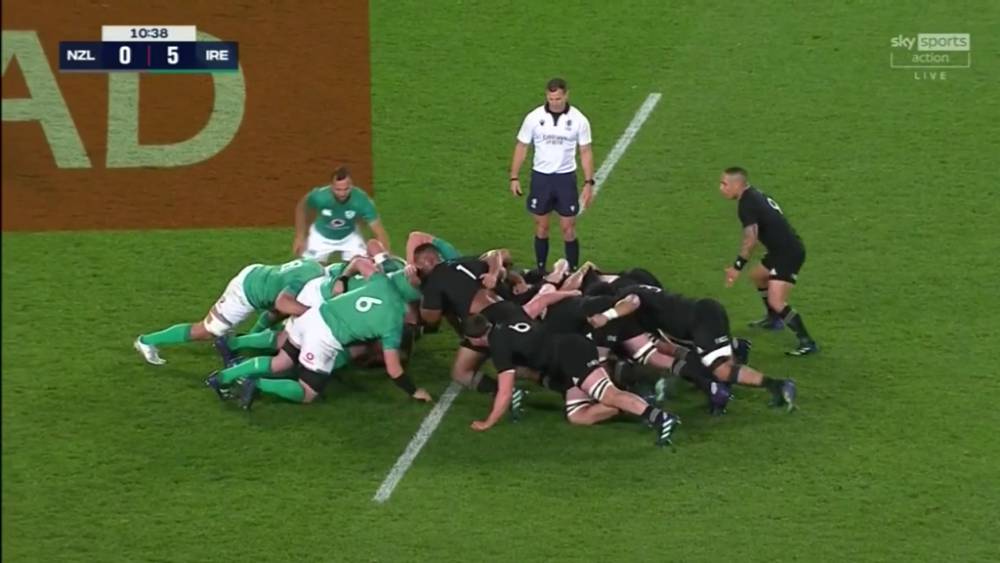 Now to events at the Optus stadium in Perth. There will be more straw available for Dave Rennie to make bricks than his opposite number Eddie Jones ahead of the second Test. As indicated earlier in the week, James Slipper was immoveable in the unfamiliar role of tight-head prop at set-piece, and Australia can only get better in that area with the return of Taniela Tupou to full fitness.

At the defensive breakdown, the Wallabies pilfered seven balls from 92 England rucks, and an 8% takeaway rate is out of the top drawer. The steals were spread around six different players – Nic White, Michael Hooper, Dave Porecki, Angus Bell, Bobby Valetini and Pete Samu. Two of the turnovers occurred in critical situations only five metres from the Australian goal-line, and the Wallabies were able to use the pilfer to stress the attacking linkage between Owen Farrell and Marcus Smith:

England were constantly looking to hide Marcus behind ‘Faz’ at second receiver, and have a big runner – typically Joe Cokanasiga or Freddie Steward – playing off him. In this case, the break-down in handling skills on the outside of the field feeds directly into a turnover by Angus Bell on the very next play.

Whenever they could, Australia targeted Smith in the tackle:

In the first instance, England were looking to make a kill after a long break down the right, but Dave Porecki very nearly dispossesses Marcus in contact. The men in white had to settle for three points when they wanted seven. In the second, Smith wants to link with Steward but isolates himself instead, and this time, the Wallaby rake finishes the job.

Despite the glowing public figures, the Australian lineout still needs an awful lot of work in order to render it a reliable platform for attack. Maro-watchers will know from English Premiership experience that he is as sneaky-smart on the ground in lineout defence as he is imperious above it:

If Itoje is not contesting the ball in the air, chances are he will be in a seam waiting to slap the ball down, or pull away an arm when the opponent comes back down to earth. Something similar happened to Cadeyrn Neville in the second period, with bench second row Olly Chessum tying up the ball.

With their second rows struggling to get a toe-hold at lineout, Australia went long, over the top of the set-piece for Samu Kerevi:

On this occasion Samu is met with force on the ad-line and pushed back, and that means one of the Brumbies’ tight forwards (Darcy Swain) has to carry on second phase, with predictable results.

When the Wallabies went to Rob Leota at the front, it had the effect of angling Kerevi’s run into two English forwards (Tom Curry and Jamie George), rather than towards the soft target he really wanted to engage, number 10 Marcus Smith:

Australia finally gets to Smith on second phase, but by then he already has Farrell and Courtney Lawes for bodyguards, and Bobby Valetini is stripped of the ball in contact before he ever hits the deck.

Few missed the irony of a situation where the northern hemisphere nation which came closest to winning a game last weekend – Wales, in their agonising, last-gasp loss to a mediocre Springbok team – also had by far the least representation in the knockout stages of their domestic competitions, the URC and the two European Cups.

Wales were a little fresher, and a little better prepared to mount a serious challenge than either England or Ireland, who had some key players active in big domestic knockout games only two weeks before the tours commenced.

In the absence of a global season structure, it is becoming increasingly hard for touring nations to mount a serious, sustained challenge – whether it is in July for the north, or November in the south. Until that season is established, we will only be able to guess at the true balance of power with both antagonists fresh and firing.

The All Blacks looked to have made solid progress at Eden Park in the first Test, nowhere more so than in their streets smarts at scrum and breakdown – evidence of the Joe Schmidt and Mike Cron influence at work? Ireland will need to sharpen their work in the red zone, and have plenty of positive midweek chat with Jaco Peyper, in order to be competitive at the ‘House of Pain’ in Dunedin.

Australia overcame a witch’s curse array of injuries, and a red card on Darcy Swain to get over the top of England at the Optus stadium in Perth. They were encouraged to play a game by the failure of the Smith-Farrell axis to fire and English febrility on attack – at least until Henry Arundell entered the action late on.

England’s coaching looks so sloppy and unfocused in so many areas that Eddie Jones must be casting spells in secret, to bring back a time when John Mitchell, Scott Wisemantel and Steve Borthwick were still in harness.

If Australia can fortify their lineout and give the likes Koroibete, Kerevi and Petaia a true foundation from which to play, the cards will all be stacked against the little Randwick mastermind. He may not even have a job to go back to, if he is slapped by the sweeping stroke of a whitewash. He will be gone baby, gone – before the World Cup is ever played, and ball is ever kicked in anger.