The jury is still well and truly out on Anthony Griffin’s tenure at St George Illawarra despite the team rising to eighth place to be in sight of an unlikely playoff appearance.

And that’s the conundrum for Dragons officials – the team has not taken a significant step forward under Griffin nor is there enough evidence to suggest from the rebuild that the next few years will be any better.

The club took up the option on Griffin’s services for 2023 before Round 1 this season to give him the job security to invest in young talent.

A bit of short-term pain for long-term gain.

Griffin is a pragmatist. When he trotted out a line-up featuring their three main building blocks for the future in fullback Tyrell Sloan, five-eighth Junior Amone and halfback Jayden Sullivan, the team struggled and Griffin was lumped into speculation about coaches on the hot seat alongside Trent Barrett, Nathan Brown and Michael Maguire.

Those three coaches did not turn their team’s seasons around and have been relieved of that responsibility.

Griffin has persisted with Amone at five-eighth alongside in-form skipper Ben Hunt in the halves but Sullivan and Sloan have barely had a look-in over the past couple of months as the Dragons have gradually clawed their way up the ladder. 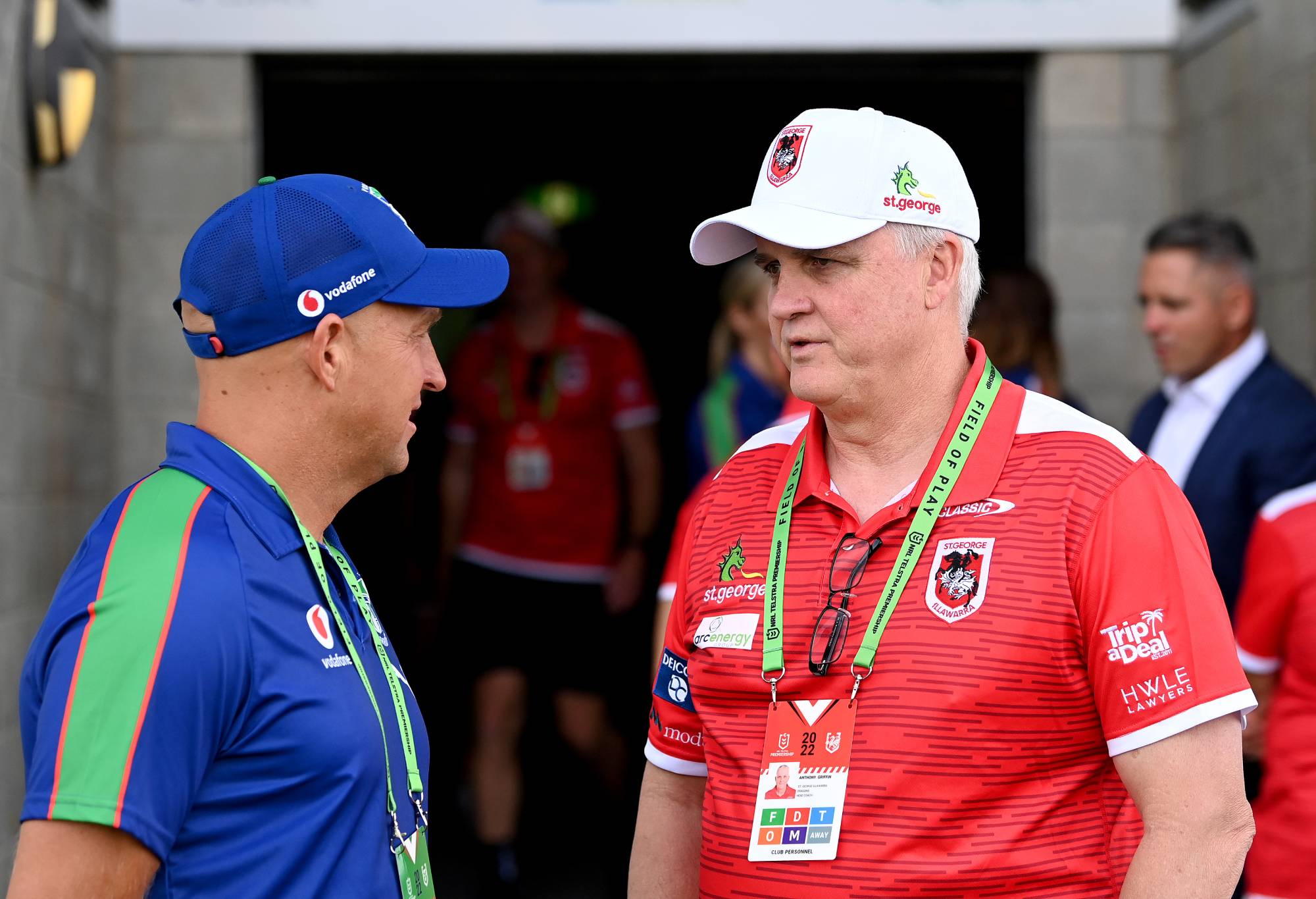 Anthony Griffin with Nathan Brown before their Round 1 encounter. (Photo by Bradley Kanaris/Getty Images)

After their 1-4 start, the Dragons have won seven of their past 10 matches heading into Sunday’s Suncorp Stadium stoush with a depleted Broncos outfit, which was weakened further on Friday night with winger Corey Oates called into Queensland camp when Cameron Munster and Murray Taulagi tested positive to COVID-19.

St George Illawarra’s form has been trending in the right direction but it is hard to predict if it’s meaningful or not – they became one of only three times who have lost to the Gold Coast all season during the past two months and were also pumped by the Storm and Cowboys but they also thrashed the Rabbitohs.

Sullivan is getting a chance at halfback on Sunday alongside his Steelers junior comrade Amone but Sloan remains in the NSW Cup where he will run out at Brookvale against Blacktown Workers an hour earlier after Moses Mbye and more recently, Cody Ramsey, have been preferred as the first-choice fullback.

Young playmakers are like leg-spin bowlers in cricket – pitch them into the fray too early and they’ll get smashed over the park with their confidence irreparably damaged.

Griffin handed Nathan Cleary his NRL debut in 2016 at Penrith and stuck by him as the 18-year-old adapted to the grind of first-grade football.

He also threw Jarome Luai, born 10 months earlier than Cleary, into the fray two years later in what turned out to be Griffin’s final season at the Panthers but used him sparingly as James Maloney had a mortgage on the five-eighth jersey.

Luai again only got a handful of NRL appearances the following season when Ivan Cleary took over as coach before Maloney’s departure for the Super League allowed him to become the long-term five-eighth.

The point being that not every young playmaker is destined to be thrown straight into the fire and be able to handle the heat, particularly if their halves partner is also inexperienced.

For every Nathan Cleary there are plenty of examples like Brock Lamb and Jack Cogger at the Knights five or six years ago who were touted as potential long-term first-graders, but had short stays in the NRL after being given too much to take on too soon.

Griffin has put his faith in seasoned campaigners ahead of his younger brigade in St George Illawarra’s climb into finals calculations, arguing it was doing more harm than good putting the likes of Sloan and Sullivan in the firing line when they weren’t ready for the physical and mental rigours of the weekly NRL intensity.

Veterans approaching the twilight of their career such as Andrew McCullough, Aaron Woods, Mbye, George Burgess and Josh McGuire have been given significant game time under Griffin. 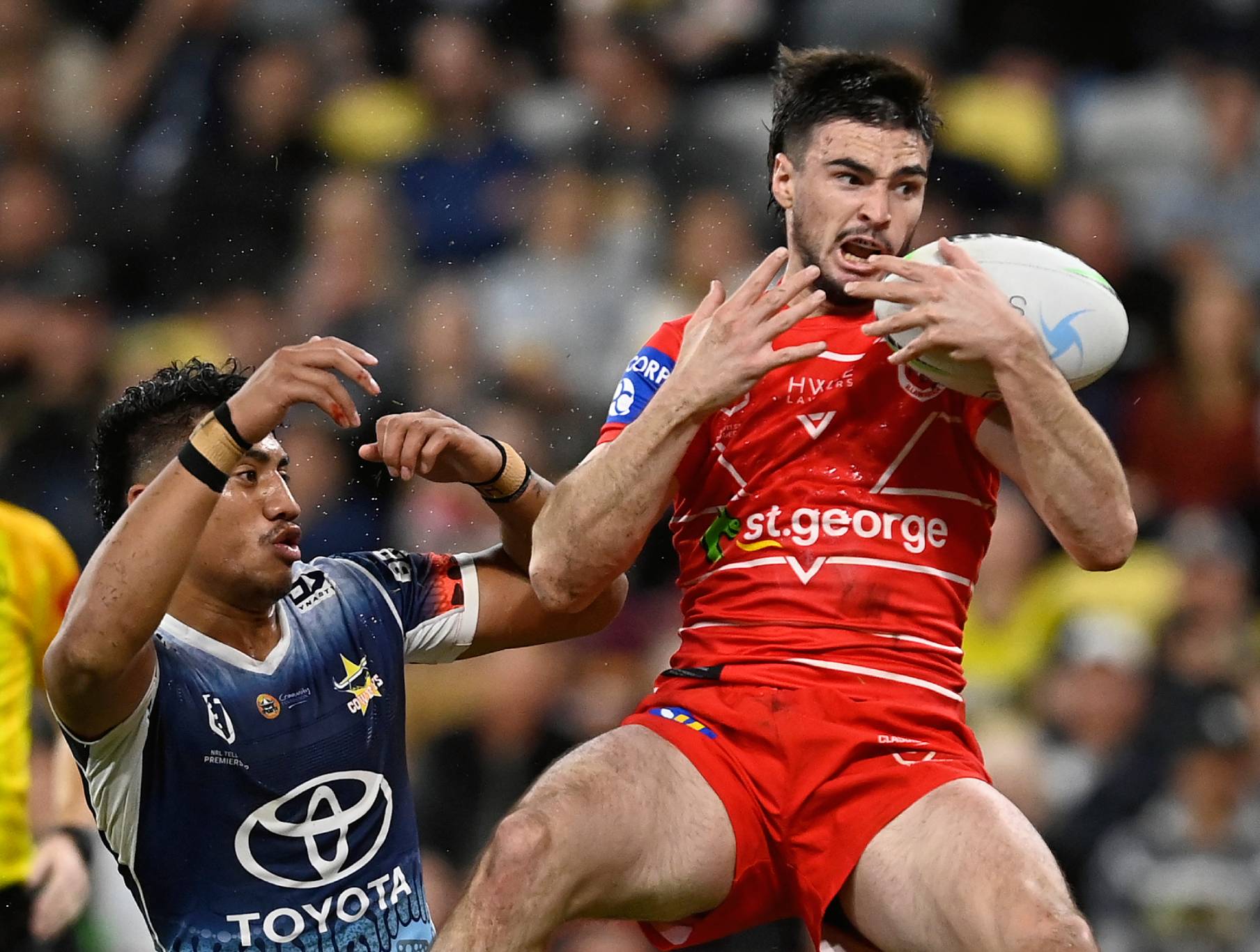 It’s kept St George Illawarra away from the bottom of the ladder but it doesn’t inspire confidence in the future.

Justin Holbrook has put his faith in an inexperienced spine at the Titans with Toby Sexton, Jayden Campbell and converted five-eighth AJ Brimson failing to deliver consistently and the team sinking to last place after a first-round finals appearance last season.

He’s now replaced Griffin as the next coach most likely to be shown the door after the Titans conceded recently that there would be a dreaded review into their 2022 campaign under Holbrook.

Depending on which way you look at it, the Dragons are either rebounding from the end of Paul McGregor’s tenure when they finished 15th and 12th in his final two seasons at the helm or stuck in mid-table mediocrity without a clear path to getting better. 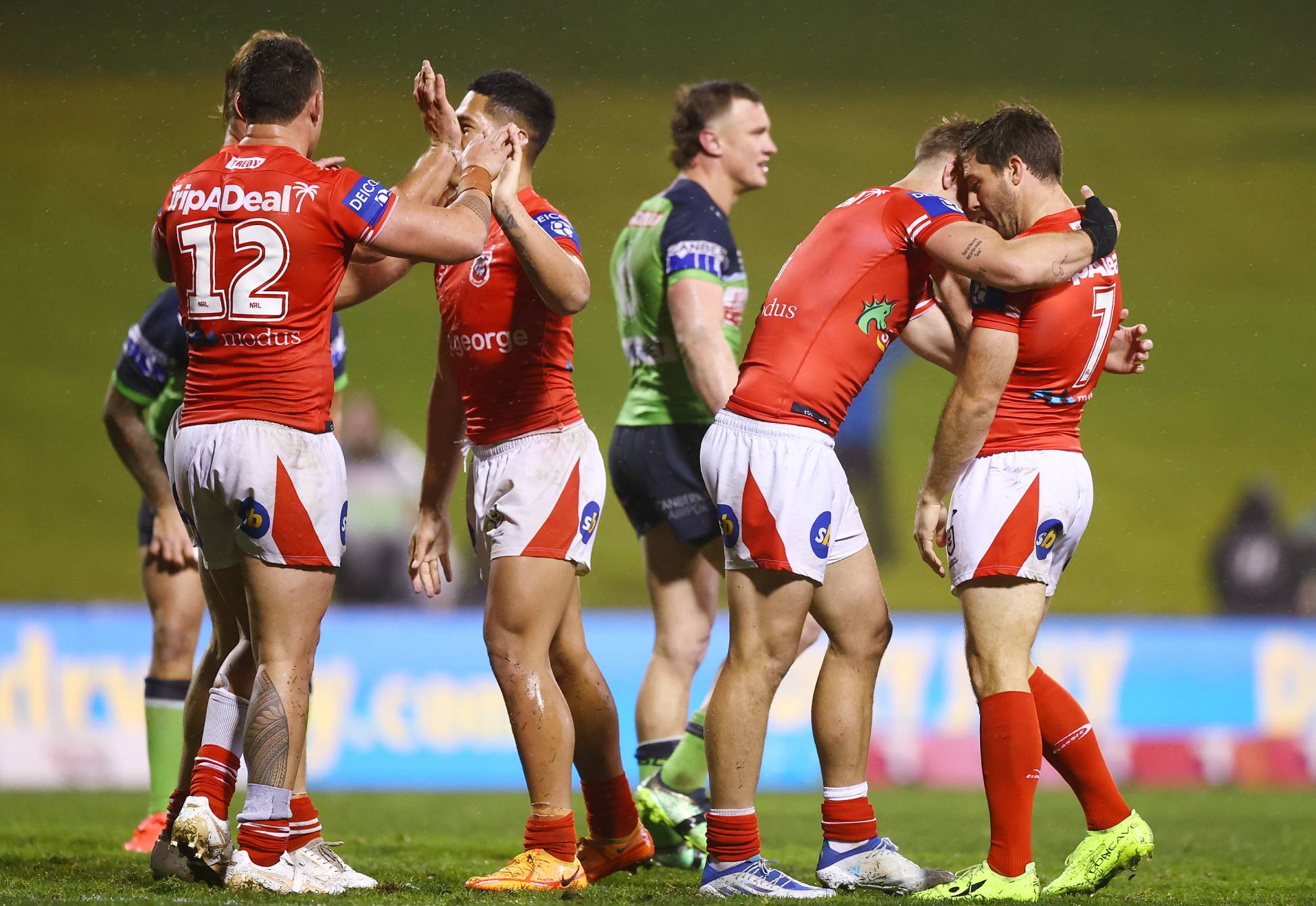 They are now 8-7 in eighth after last Sunday’s controversial narrow win over Canberra in Wollongong. At a similar stage of the season 12 months ago they were 8-8 in seventh spot before the Paul Vaughan COVID party prompted widespread bans and fines and an eight-game losing streak after the second bye round.

With the team well on track to better last season’s record, Griffin’s position is safe heading into next year but Dragons management will be delivered a double dose of deja vu regarding the coach’s tenure before 2023 if the side again misses the finals with little sign of the youth in the club progressing.

Do they then offer Griffin an extension or wait it out until mid-season? It’s way too premature to even consider his future beyond this year but they are likely to again face the age-old rugby league dilemma of “back him or sack him”.

North Queensland and Brisbane have benefited enormously this year from the pain of the past couple of seasons when young prospects got a lot more reps under their belt than they otherwise would have if the team had given more game time to seasoned campaigners.

Both teams bottomed out to finish in the cellar in successive seasons before shooting skywards this year with several of those rising stars now graduating to representative honours.

There is no definitive way to rebuild an NRL team but it remains to be seen whether St George Illawarra under Griffin are stuck in purgatory on the fringe of the top eight or building towards a return to being a title contender for a club which has enjoyed just one playoff win in their two post-season appearances over the past decade.

Truck Tailgates: See All Your Options

Emotional scenes for Federer’s farewell sum up his everlasting impact