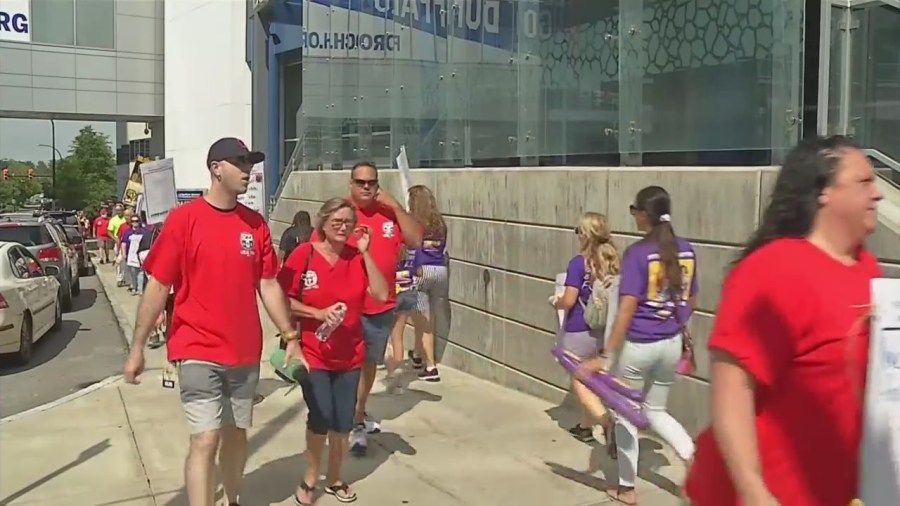 The workers did so to shine light on their ongoing contract negotiations with the health care provider. At Thursday’s picket, hundreds of workers represented by the Communications Workers of America and 1199 SEIU United Healthcare Workers East came out.

On August 8, the workers and their representatives delivered a 10-day notice to Kaleida with the intent to picket.

The contract between the two unions and Kaleida Health, expired on July 31 and the bargaining committee has been meeting five days a week to hammer out a new agreement.

The contract will be for 6,300 healthcare workers throughout Kaleida’s Healthcare Network including Buffalo General, Oishei Children’s Hospital, Millard Fillmore Suburban, and DeGraff Memorial.

Both union reps and Kaleida Health officials say a lot of progress has been made in recent months on a new contract.

But few major issues remain on the table including better pay and safer staffing ratios.

“I am here to stand up for my patients, push is past the point of exhaustion, every day patients are waiting hours,” said Debbie Wilson, a nurse at Millard Fillmore Suburban.

In a statement, Kaleida health says they want to be the market leader in wages, benefits and staffing ratios.

However, they say there is a cost associated with that. the three year economic proposal would cost the healthcare network $200 million. Officials say that’s more than twice the 2019 agreement.

Union workers argue that if Kaleida wants to be a top-tier provider, they need to offer more.

The unions and Kaleida Health will pick back up negations starting tomorrow. They’re at the bargaining table five days a week.