Justin Holbrook’s job is hanging by a thread after another embarrassing loss, with the Titans going down 36-26 to the Canterbury Bulldogs at CommBank Stadium.

Holbrook left the coaches box at halftime and watched from the sideline as his side staged a minor rally after the break, though they left themselves with far too much to do after trailing 26-10 at the break.

The manner in which his side capitulated – again – in defence is no longer excusable at this level. There were some that were putting in extra levels of commitment, particularly captain Tino Fa’asuamaleaui and second-gamer Jojo Fifita, but too many who failed at basic levels of competence, organisation and execution.

This is a Bulldogs team that have revitalised their attack since Mick Potter got the job, but they could not have expected to find it so easy. Josh Addo-Carr had a hat-trick within 45 minutes, two of them long-range interceptions, and other first half scores for Matt Burton, Jeremy Marshall-King were far, far too soft.

This is the ninth time in 19 games that the Titans have conceded more than 30 points. They are now on an eight-match losing run and are yet to win a game away from Queensland in 2022. Only the Dogs putting the cue in the rack early kept the score even half respectable. 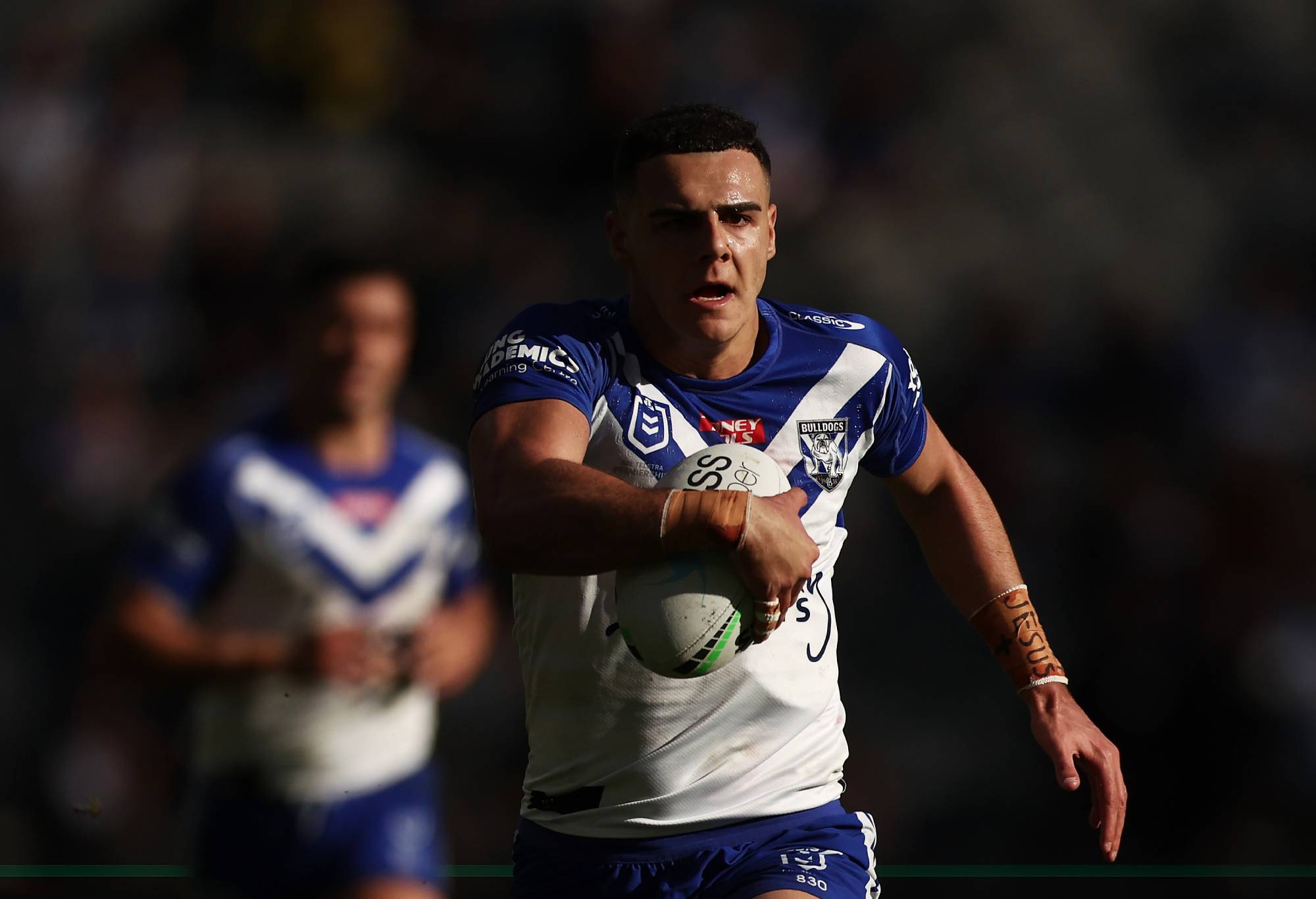 Though both of these sides are well outside finals contention, there was to lack of narrative. Beyond the coaching pressure on Holbrook, there was the rerun of Matt Burton v Fa’asuamaleaui from Origin 3, with Dogs enforcer Tevita Pangai jnr having promised to step in on behalf of his teammate if required.

Tino was jeered constantly by the raucous Canterbury crowd, and the entry of TPJ in the 25th minute was met with great anticipation. He made a beeline for Fa’asuamaleaui and they came in from all parts. Perhaps Holbrook’s best decision of the day was to choose that moment to give his skipper a breather.

The 11,726 crowd came to CommBank Stadium expecting a show and were given one. This Dogs’ team is box office, because they attack with vigour but also defend poorly. Trent Barrett’s Bulldogs tried to be the Dogs of War, but Mick Potter’s are The Entertainers.

With ball in hand, they are a breath of fresh air. The willingness to offload, spread wide and attack via the wings has been on show in recent weeks, where Canterbury have run up scores on Souths, Parramatta and Wests Tigers, with only a game in a monsoon against the Sharks an exception.

Burton and Addo-Carr’s rapport on the left edge goes from strength to strength and the performances of youngsters Jacob Kiraz and Aaron Schoupp will give fans plenty to look forward to. They might be playing only for pride at this stage, but there was plenty of it on display from both the players and the fans.

That said, they are far from perfect in defence. The four tries they conceded from kicks were all highly preventable: regular fullback Jake Averillo was missing with Covid and his replacement, Declan Casey, is more commonly seen in the centres. One suspects that after today, the experiment will end.

The Titans took first possession, with, inevitably, Fa’asuamaleaui taking the hit up to a chorus of boos. Before the chants – unprintable – had died down, he had gifted the Dogs two points via an escort penalty.

Burton took the kick, and his day would get better very quickly. Canterbury have shown plenty of willingness to attack from deep of late, though nobody appeared to have told the Titans.

Burton darted on his own 20 and caught Patrick Herbert in a slide, splitting the line wide open. Addo-Carr proved how quickly he had shaken off his glute issue by sprinting up on the side, taking the pass and cruising to the line.

While the Bulldogs’ endeavour in attack has been impressive since Potter took the reins in May, their soft underbelly remains. On the first serious set from the Titans, hooker Aaron Booth slid a kick through and found Toby Sexton for a very simple try.

If the Dogs’ defence can be weak, the Titans’ tackling can be near non-existent. They had been warned by a close call with Raymond Faitala-Mariner going for the line, but failed to heed the warning.

After AJ Brimson had failed to deal with a Burton kick, resulting in a set on the Titans’ line, Marshall-King stepped through from dummy half under the posts for a very, very easy four points.

The Titans pushed back, but were counter-punched spectacularly. They had a fifth tackle penalty – Fa’asuamaleaui claimed an eye gouge and Corey Waddell was put on report – and a set restart, but disaster struck.

Booth sought Brimson on the short side, but Addo-Carr read it, took the intercept and went the length. Jojo Fifita put in a superb effort to reach him from the other wing, but only enough to knock the Foxx from his feet as he put the ball down.

When Tino took his breather after meeting TPJ, the Gold Coast went off a cliff. Kiraz fended through Tanah Boyd and raced 70m, and while Brimson did stop him, the Dogs simply spread to the left to Marshall-King, who found the line shot and put Burton over for another.

It might have gotten worse. Kyle Flanagan spotted Jojo Fifita inside and lofted the long pass to Kiraz, but the Titans winger recovered to force his counterpart into touch before the grounding.

They would be rewarded at the other end. Casey pulled off a trysaver every bit as good as Fifita’s to deny Herman Ese’ese, but it was in vain as the Dogs were undone by another simple kick play: this time, David Fifita the beneficiary.

The tries just kept coming after the break. Addo-Carr completed the hat-trick by picking off a Sexton pass to race another easy 80m to the line.

The Dogs kick defence remained very poor. Sexton again found nobody at home, Flanagan got a bad bounce and Philip Sami was on hand to get to the putdown before the dead ball line.

The theme continued. Herbert rose high above Aaron Schoupp to take another kick, this one from Boyd, and suddenly it looked on.

It didn’t last. The defence fell apart again, and it was no surprise that Addo-Carr and Burton were at the heart of it: Herbert, again, was caught inside and though the Foxx could have gone for the line, he looked inside to his five eighth for Burton’s second.

The points kept flowing. David Fifita took the short kick off, the Titans moved into good ball and his cousin Jojo was able to cross for a first try in the NRL.

The resistance had been fleeting. Though the Gold Coast did show some pride to get themselves back within 10, there was always the feeling that their tackling would let them down in the end. The Dogs always had far too much.

The neutrals guide to choosing a bandwagon