Honda today unveiled the next generation of its most high-performance car in the U.S., the 2023 Civic Type R. Honda calls it “the fastest, most powerful Honda-branded vehicle ever offered in the U.S.”

Honda builds many high-performance cars but sells most of them under the Acura brand in the U.S.

The Civic stable is full, so a bit of explanation is in order:

The standard Honda Civic is an excellent, affordable compact car. It’s available as a standard sedan or practical hatchback. Honda recently marked the 50th anniversary of its best-known product. Redesigned for 2022, the Civic recently won our Best Buy Award among compact cars for its outstanding balance of a reasonable price with refined driving dynamics. The Civic starts at $22,550 (plus a $1,095 delivery fee).

One of Two High-Performance Civics

The Civic Si is the more affordable of the two but still equipped for stoplight-to-stoplight fun. It makes 200 horsepower (to the standard car’s 158) and adds a limited-slip differential to make it handle tighter. It starts at $27,500 (plus that same delivery fee).

The Civic Type R is more of a street-legal race car. Honda hasn’t revealed pricing yet but says the new car will reach dealerships this fall.

It’s powered by a turbocharged 2.0-liter 4-cylinder engine. Honda says it’s the most powerful engine ever built into a Civic but hasn’t given us the actual horsepower figure. For reference, the last Civic Type R made 306 horsepower. It comes mated to an “improved six-speed manual transmission and rev-matching system for an even more intimate and rewarding connection with the driver.”

Honda says the body is lighter and more rigid than past Type R models. The car recently set a new production-car front-wheel-drive track record at the Suzuka Circuit in Japan. 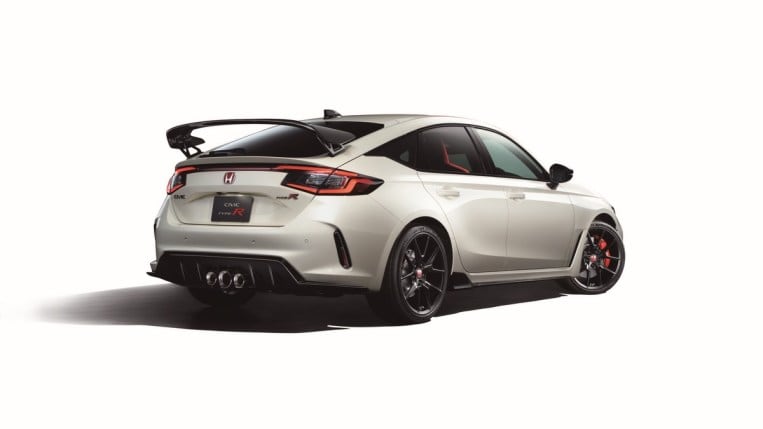 Dramatic Outside, Attention-Grabbing Inside

The body is more aggressive than the typical Civic look. It’s longer, lower, and wider than the Si, with both front and rear fenders flared. The rear doors are unique to the Type R, sitting wider to meet the strong shoulder line. It is again based on the Civic Hatchback variant.

Inside, a honeycomb pattern cuts the dash horizontally, aping the cut of the grille. The driver’s instrument screen is different than those in other Civics. At the top, rev indicator lights and a gear position indicator help the driver find the quickest shift points. Below, a “multi-information display can show vehicle information selected by the driver.”

But it’s the red that grabs you. Honda designers went through a trial-and-error process to find the shade they wanted for the seats. The result is striking — what one designer called a “bright red world that jumps into your field of vision and stimulates your anticipation for the driving experience you are about to have.”

The suede-like upholstery has a high friction coefficient to hold the driver and front passenger in place through hard cornering. Best of all, someone at Honda understands that a 6-speed manual requires a rounded metal shift knob cool to the touch in the palm of your hand.