Contrary to what you might believe, Eddie Jones can’t actually start a fight in an empty room.

England’s coach faced the media in Perth this week and showed many of his faces, gun-fighter glint in his eye when staring down questions he didn’t rate, throwing the word ‘mate’ around like a ninja star, his face glowing as he talked about a 90-metre try Henry Arundell pulled off in training.. Bristling, bubbling, laughing, seducing.

But right at the end, an admission that Dave Rennie’s utter refusal to engage Jones on a banter level so far this campaign is disrupting his mojo.

“You can’t spar against nothing, mate,” said Jones.

“In 2016 we had [Michael] Cheika here and there was a bit of niggle. It was good Australian sport. This time it feels like… I don’t know what it feels like. I like a bit of fun. When you’re sparring in a corner by yourself it’s not much fun.”

Earlier the same day Rennie had been asked about Jones and batted away the question.

“It’s not about us. It’s about the players and we’ll let them do the talking,” said the Kiwi coach.

The empty room is apt on another level. While Jones and some of his players spoke to the media at a East Perth bowling club (side note: there would be hell to pay if cameras crew and heavy rugby players walked all over the greens of my local bowlo) – the Wallabies delayed their flight into Perth until late Thursday.

Unlike a year ago when they did their missionary work in local rugby clubs in Perth, there was as much chance of seeing a quokka in Pitt Street Mall this week as a Wallaby in the west.

Before leaving for Australia, Jones warned of abusive crowds and aggressive local journalists. So far there has been no sightings of either. In fact, the most aggression he has apparently encountered came from within his own ranks after he told Owen Farrell he would not be captaining the side on this tour.

Farrell was unhappy, Jones was blunt.

“I told him he wasn’t going to be captain, he wasn’t very happy. I didn’t expect him to be happy, I expected him to be unhappy and it was just the sort of reaction I wanted because that is the sort of player he is.”

It’s 19 years since I’ve been in a room with Eddie Jones – back then he was coaching Australia at the 2003 World Cup – and the experience is still a treat, like watching a favourite band’s reunion tour where they run through all the old hits you’d forgotten you know the words to. 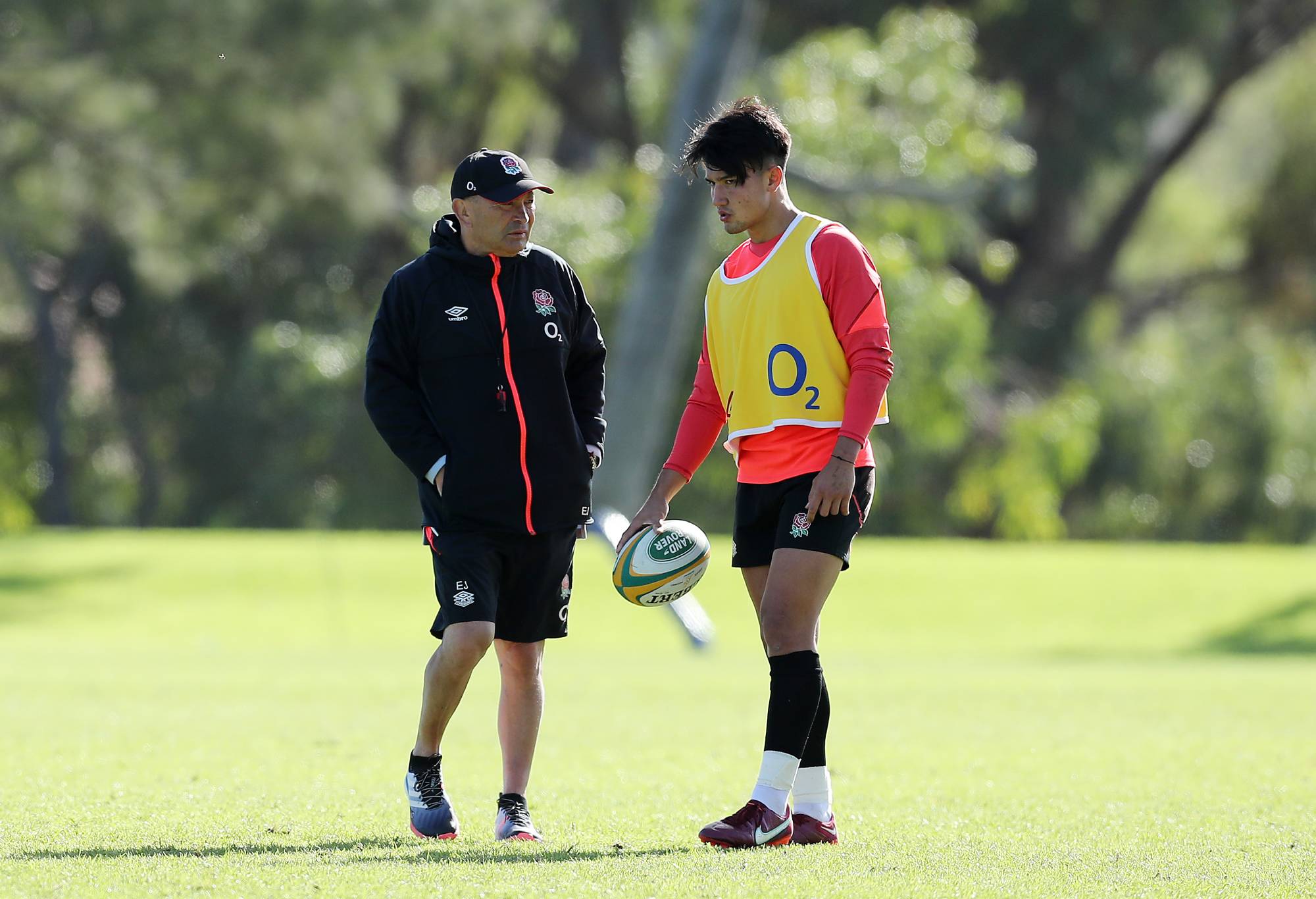 (Photo by Will Russell – RFU/The RFU Collection via Getty Images)

Coaching is a results business and Jones acknowledges his haven’t been too good in recent times. The 8-0 win loss record against Australia is a special achievement, but the past two Six Nations campaigns have raised serious questions about his longevity in the role.

“Every international coach is under pressure. I’m under pressure because I haven’t had results that are good enough,” said Jones.

Morgan Turinui, the former Wallaby and Stan Sport expert, grew up alongside Jones.

“He’s the best, smartest, coach I ever had. He taught me how to be an adult, how to be a man,” Turinui told The Roar.

“I’d just turned 21 and walked into a Wallaby group that was full of world champions and superstars and I thought that was arriving.

“He ruled by accountability. If you want to have an opinion, then you’re accountable for your opinion. And he will challenge you on the evidence and the information and the knowledge that you’re bringing, to have that opinion.

“If you do something on a field, if you play a certain way, he will hold you accountable for one, your preparedness to play, and two your decision making and effort.

“I don’t think he minded being challenged from people whose opinions he respected or people he knew had done the work. 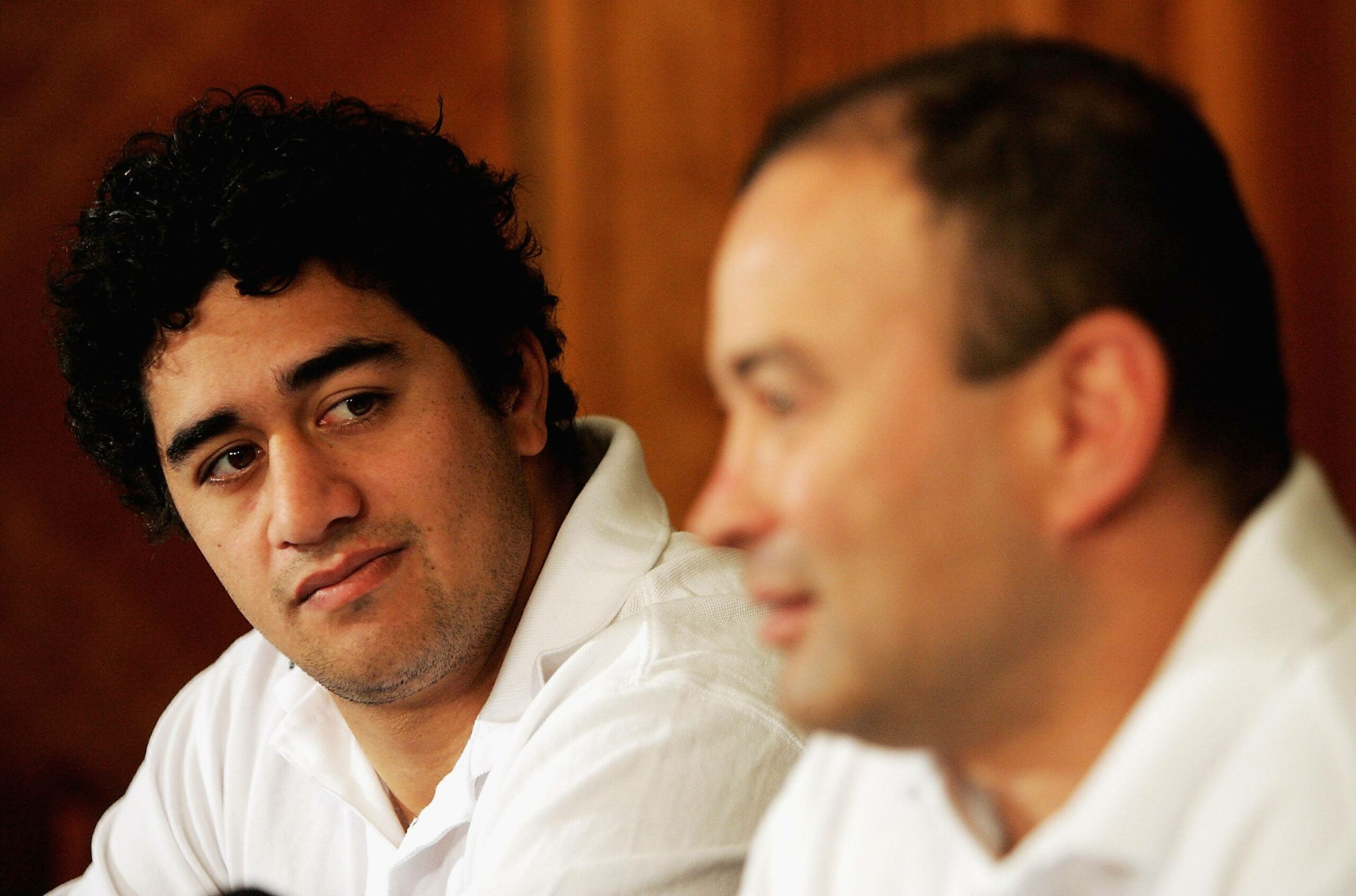 Morgan Turinui watches on as Eddie Jones talks to the media in 2004 in London. (Photo by Ian Walton/Getty Images)

“If you were going to say something outlandish, you better have some evidence to back it up. You couldn’t just say ‘I reckon we do this’, because he would ask you why. And if you didn’t know, then that was blasphemy to him.

“The way he conducted it back then, and this is 20 years later and maybe we don’t run sports teams like that anymore, it wasn’t out of the ordinary, and it was effective.”

Jones, he says, had “the hardest work ethic, was the most accountable.”

“He had a flawless knowledge of the opposition and ourselves – he knew everything. And then we had a captain that was the same in George Gregan.”

The building blocks of Jones’ long-time success as a head coach are “research, hard work, knowledge and lots of data.

“You knew if you were walking off the training field at 5pm and you were having an ice bath and dinner and maybe a bit of footage – Eddie was working till 2am. If you had a big night out it was safer to come home at 8am than four or five because, there was a chance Eddie was up and about in the gym or in the foyer printing stuff.”

Turinui recounts being in training camp running hills when the players would spot Jones’ red Jaguar parked in nearby trees.

“Knowing Eddie he probably wasn’t even watching. But the body language was always a bit more positive if the red Jag was around.”

Jones’ media conference performance – jumping around from stern to jovial and back and forth throughout – isn’t just put on for that particular environment.

“The thing with Eddie was you were never sure which way it was going to go,” Turinui said.

“He was great at on-off, he could move on. If he needed to give you some straight feedback he would then he’d throw his arm around you five minutes later. It also meant you weren’t sure sometimes which Eddie you were going to get.

“But I would think that most of us looking back could see he was very good at getting the best out of us.”

Few coaches get to walk away on their own terms as conquering heroes. When Jones does go, there are those who would like to see him back in Australian rugby.

Sydney Morning Herald rugby writer Georgina Robinson told the Roar Rugby Podcast she felt Jones is “a head coach until he drops dead. That’s the problem. And so does Eddie.”

Robinson added that if Rugby Australia is “serious about being world-class you have to bring home the best Australian coach.”

There have been suggestions he could fit into a director of rugby position, although Turinui isn’t convinced.

“I would hope that there’s a place in the [Australian] game for Eddie Jones to contribute because I know he can,” Turinui said.

“Whether it’s the Scott Johnson-style role – although of course, I’d pity any Wallaby coach who has to work under Eddie – or whatever.

“It depends on what Eddie’s motivation is. Maybe he’s just about the drug of winning and losing – the fight every week, every month, every season to achieve something, to win silverware.

“Or is there some interest for him in trying to build the game elsewhere, or the young players coming through? It will depend philosophically around what he wants to do in rugby.”

That’s for the future. But we know what Eddie wants right now. A bit of niggle. Some good Australian sport. But his psyche’s craving boxing and Rennie’s making him play solitaire.

Watch every match of the July Test Series on the Home of Rugby, Stan Sport. Kicks off this weekend with Wallabies v England (Saturday 7:15pm AEST), All Blacks v Ireland (Saturday 4:30pm AEST), South Africa v Wales (Sunday 12:55am AEST) and Argentina v Scotland (Sunday 5:05am AEST). All streaming ad-free, live and on demand only on Stan Sport.