How the Wallabies heaped coals on Eddie’s head in Perth

“I imagine hell like this: Italian punctuality, German humour and English wine.” Those are the words of celebrated Anglo-Russian film-maker, actor and raconteur Peter Ustinov – now sadly departed from this world. For current English head coach Eddie Jones, you can add ‘losing a series in Australia, to a Wallaby team coached by a Kiwi’ to that list.

The smoke will be curling, and the fires will already be stoked in the English press if England lose even one of the remaining games in this series. The wolves will be licking their lips at the prospect of an old-fashioned media barbecue, celebrating Eddie’s exit from the RFU before the World Cup in 2023 ever commences.

Eddie Jones will probably still be scratching his head now, at how his charges contrived to lose a match where Australia lost one of their navigator-in-chiefs (Quade Cooper) before the match had even begun, their starting full-back and tight-head prop to injury within the first 25 minutes, and their lineout caller to a red card just before half-time.

That left England playing against 14 men for the bulk of the contest, but still losing out for the second time in a row, after their dispiriting warm-up loss to the Baa-baas at Twickenham a couple of weeks ago. The coals are getting hotter at English HQ.

In truth, an Australian win did not look to be on the cards when the men in white moved out to a five-point margin with only 20 minutes left in proceedings and their one-man advantage still intact.

Dave Rennie was admirably objective in his comments to Sky Sports on the telly immediately after the action had finished:

“We lost Quade before the game. We lost Allan [Alaalatoa] and Banksy [Tom Banks] before half time, and [Darcy Swain] to a red card.

“We didn’t fire too many shots in the first half and lost the collisions on both sides of the ball.

“So, I’m really rapt with the character and the problem-solving in the second half, with one man less.

“We’re trying to grow our game, we’re trying to be a lot better in the collision area… [There are] plenty of things to tidy up for us.”

It was a realistic assessment from a coach with his feet on the ground. In the heat of the moment, the impact of the Wallaby bench in the last quarter papered over a lot of cracks present in the first 50 minutes. In the cold light of day, the areas where improvement needs to be made before the second Test at the Suncorp are clearer.

The published statistics claim an Australian lineout retention rate of 10 out of 11 throws, but those figures only represent first touches to the ball. The Wallabies won six of their throws cleanly, lost three to steals (one in the air and the other two when the receiver returned to terra firma). There were three further English spoils requiring the Aussie forwards to scurry back with their dustpans and brushes and make a save. By contrast, England won 12 of their 13 throws after losing the first to an excellent poach by Darcy Swain, but all 12 were clean ball that enabled the subsequent phase to run smoothly.

Before Darcy Swain’s red card, Australia won two, lost one and had one spoiled. Both of the wins occurred on the 5m line at the front via Rob Leota. After Swain departed on his red card, Australia won four, lost two and had one disrupted. Allowing for one quick throw in to Jordie Petaia, two deliveries right over the top to Samu Kerevi in midfield and those two wins by Leota, there was only one clean ball provided by the Wallaby second rows. When all the smoke and mirrors are dispelled, there is a lot more work still to be done at lineout time

Cadeyrn Neville has been widely lauded for his contribution, but in truth it was a curate’s egg – good in parts. He topped the Australian tackle count with 17 and tied Michael Hooper for top spot in key ruck arrivals at cleanout time with 19. He forced one turnover with a choke tackle and made another try-saver in the corner.

On the other side of the coin, a midfield mis-read on defence resulted in a big first half break by Tom Curry:

This was a typical example of the collision outcomes in the first period. First Will Stuart runs over the top of one Brumbies second row (Swain), then Neville picks the wrong runner on the following phase, jamming in on Maro Itoje and cutting Curry loose.

Two of Neville’s three lineout wins were spoiled at source, and four of his carries were either passive, or lacked linkage to the attacking pattern:

Worth persisting with? Definitely. Plenty of room for improvement? Likewise, a resounding ‘Yes’.

Forget the knee-jerk reactions. The real stars of the show started life on the pine in Perth. James Slipper did a sterling job in the unfamiliar role of tight-head, and removed all of the snarl, and most of the teeth from Ellis Genge and Mako Vunipola at scrum-time. He was rock-solid on his own ball: 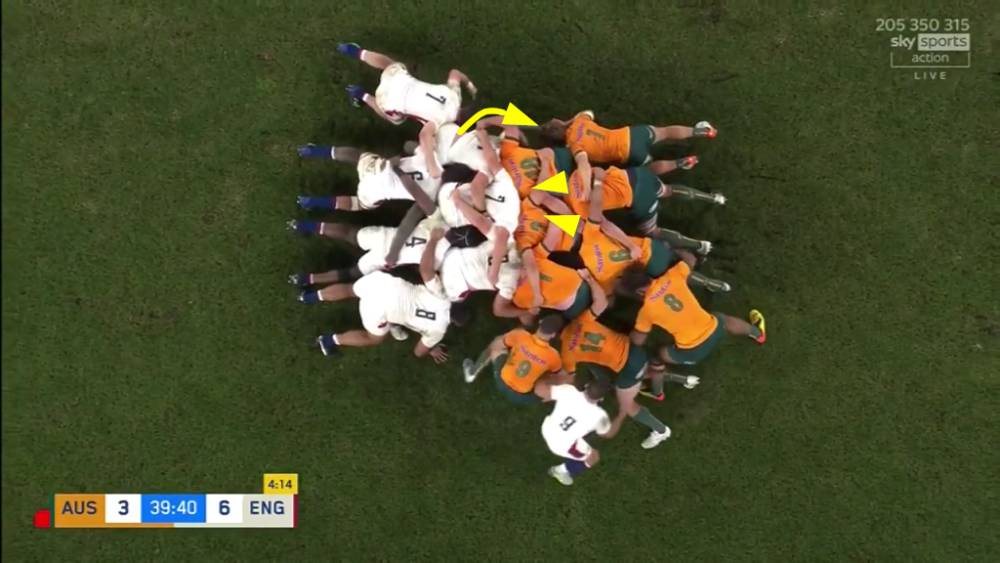 Dave Porecki (who also enjoyed a notable debut) and Slipper are pinching in on Jamie George in the middle of the England front row, and that gives Ellis Genge neither the room nor the opportunity to walk around Slipper on the loose-head as freely as he had Tadhg Furlong in the England-Ireland Six Nations game. It also gave Bobby Valetini a set-piece platform for the carry which Australia signally lacked from lineout.

Slipper’s crowning glory came with his clubmates in arms from the Brumbies, Scott Sio and Folau Fainga’a, in the 74th minute of the match:

All three rose from the pine to have terrific games, and along with Matt Philip, give the Wallabies a foundation in contact which they had conspicuously lacked with their starting tight five on the field. Australia were passive on the forward carry until their arrival off the bench from the 55th minute onwards, but they became the aggressors in a tumultuous final quarter.

The refereeing of collisions was as wilfully opaque as ever during this first international weekend in July. In the game between New Zealand and Ireland, Scott Barrett mysteriously escaped any kind of review, let alone sanction for this challenge on Peter O’Mahony:

‘Scooter’ is offside while making a cynical play, and then hits O’Mahony directly on the neck with his shoulder, but the TMO saw nothing amiss.

Meanwhile, Darcy Swain moved in for a bit of understandable retaliation after a vigorous hair-pull from Jonny Hill, and saw red for his trouble: 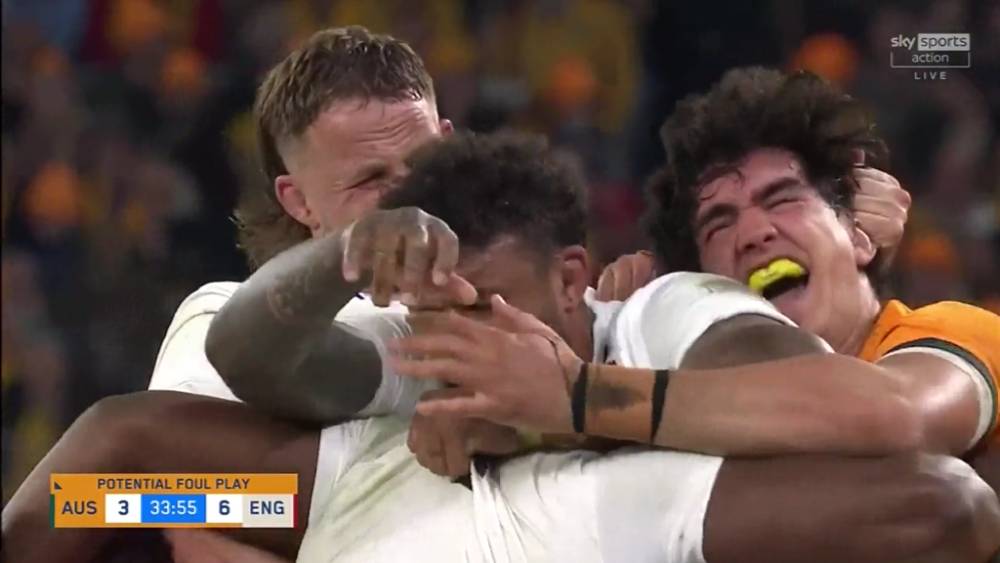 The poles of refereeing of these elite-level matches seem to be moving ever further apart in interpretation, not closer together, and that cannot be good for the game as a whole.

The only positive aspect of the red card and the rash of injuries was that it put some of the players on the park who probably deserved to start anyway. Jordie Petaia entered the fray to add his muscle, size and considerable skills to the back three, and from the 55th minute onwards, Matt Philip became the tight forward workhorse on the carry that the Wallabies had previously lacked.

His first involvement came from another solid scrum set by James Slipper:

Michael Hooper makes ground right up the middle, and Philip is on hand to take the ball up on second phase, with Neville notably more comfortable in his Brumbies role of first cleanout rather than carry.

It is hard to overestimate the importance of a player from the tight five willing and able to do this kind of work, repeatedly and effectively. It is what enables the big runners like Samu Kerevi and Marika Koroibete to thrive and really dig ever deeper into their own running games, and push them over the 10 carry threshhold. When Samu and Marika carry the ball often enough – they had 26 carries between them in Perth, one third of which occurred in the last 20 minutes – Australia can control a game of rugby. For Dave Rennie’s Wallabies, that is how winning is done.

It sets the tone and tempo for the game Australia wants to play:

First Kerevi clatters upfield, followed by Sio. Then Andrew Kellaway kicks through for another big body (Jordan Petaia) to boulder into Freddie Steward and force the ball into touch near the corner flag. Brutal and impactful. But for it to work, the starting Brumbies front five needs to be augmented by at least two tight forwards who can actually carry the ball.

From the ensuing lineout, Philip played a crucial role in opening the right-hand side of the maul for Folau Fainga’a: 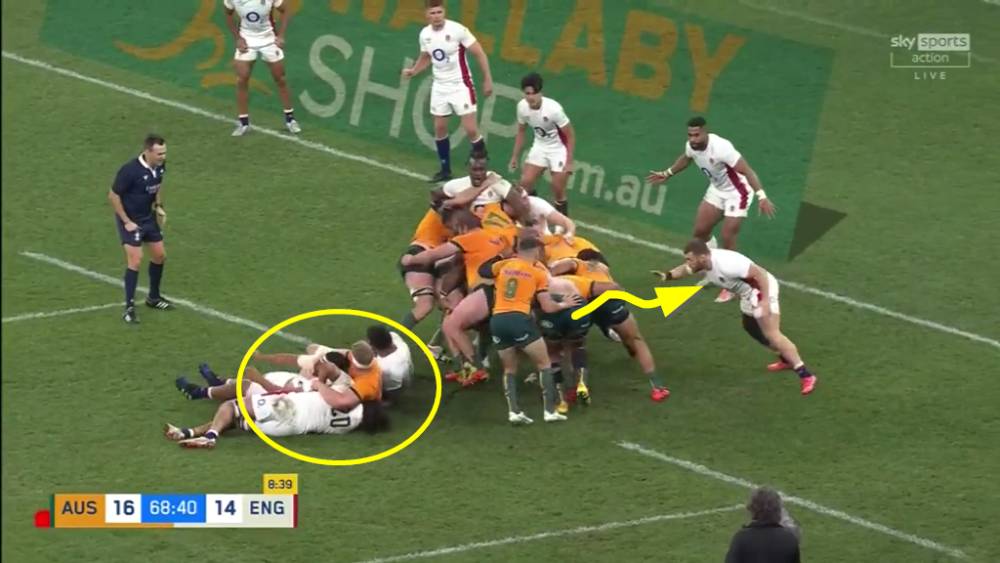 Readers of previous articles like this one will be well aware of the function of the blocker on the outside corner in the Brumbies maul pattern near the goal-line. Matt Philip plays the Swain role to perfection, peeling away no fewer than three English defenders to clear a path for Fainga’a.

The attacking sequence which topped off the cake with a satisfying cone of whipped cream featured several key interventions by Matt Philip:

Kerevi makes the hard yards off the top of the lineout, then Philip pulls more defenders towards midfield, setting England up for the short-side switchback phase. He is the ligament connecting the muscle of two runs by Samu and Marika.

Shortly afterwards he was at it again, setting a platform for Noah Lolesio and Neville, right up the gut.

It is not always about making the breaks, it is about having a player who fits the style that suits you best – and that is Matt Philip for Dave Rennie’s Wallabies, to a tee. The sequence was finished off by another bench stalwart, Pete Samu:

Eddie Jones is already in rugby purgatory, with the English media scenting blood before the World Cup next year. If his England team loses in Brisbane next weekend, he will probably enter the fifth circle of Dante’s hell. England have only themselves to blame after dominating the opening 50 minutes of the first Test, but failing as dismally as they had in the Six Nations at the task of converting domination into tries and points.

The much-anticipated Smith-Farrell axis failed to fire, despite England winning a mountain of collisions in that period of the match. Baby-faced assassin Henry Arundell was a brilliant ray of sunlight towards the end, and he will have made Wallaby defence coach Matt Taylor really sit up and take notice. If Rennie and Taylor did not know much about him before the game, they will certainly be aware of him now.

Dave Rennie was right in his summary immediately after the match. Australia cannot afford to be second best in the contact zone for as long as they were in Perth, if they want to take home the Ella-Mobbs trophy. The lineout has to provide a better attacking platform, and the starting Brumbies tight five needs to be fortified by two or three proper ball-carriers.

If Quade Cooper’s injury persists, there is a strong case for the call to go to out to Rory Arnold, if necessary by alpenhorn, to pair him up with Matt Philip. With Taniela Tupou joining Dave Porecki and Angus Bell in the front row, and Scott Sio, Folau Fainga’a, James Slipper and Caderyn Neville providing the punch off the bench, the tight five looks solid.

That pack of forwards can set the platform for Samu and Marika and Jordie to thrive, and give Dave Rennie’s Wallabies their lifeblood of 30-35 power carries per game. That would be Wallaby heaven, and even if it is also means Eddie Jones’ hell.