How they’ll line up after Blues, Maroons forced into changes

Queensland were forced to alter their team for Origin 3 after Cameron Munster and Murray Taulagi tested positive for COVID-19 while NSW also had their hurdles with Payne Haas, then Jordan McLean ruled out of their engine room.

Preparations have been far from ideal for each team and there is talk that the Maroons could make further changes on game day.

Tom Dearden is listed to start at five-eighth but coach Billy Slater has refused to rule out bringing the more experienced Ben Hunt to the halves and elevating Harry Grant to starting hooker, meaning Dearden would make his debut from the bench.

Dearden was elevated from the reserves when Munster was ruled out while Broncos winger Corey Oates was drafted into the squad as a replacement for Taulagi. Tom Flegler and Hamiso Tabuai-Fidow remain on the bench after the team was cut to 19 on Tuesday night. 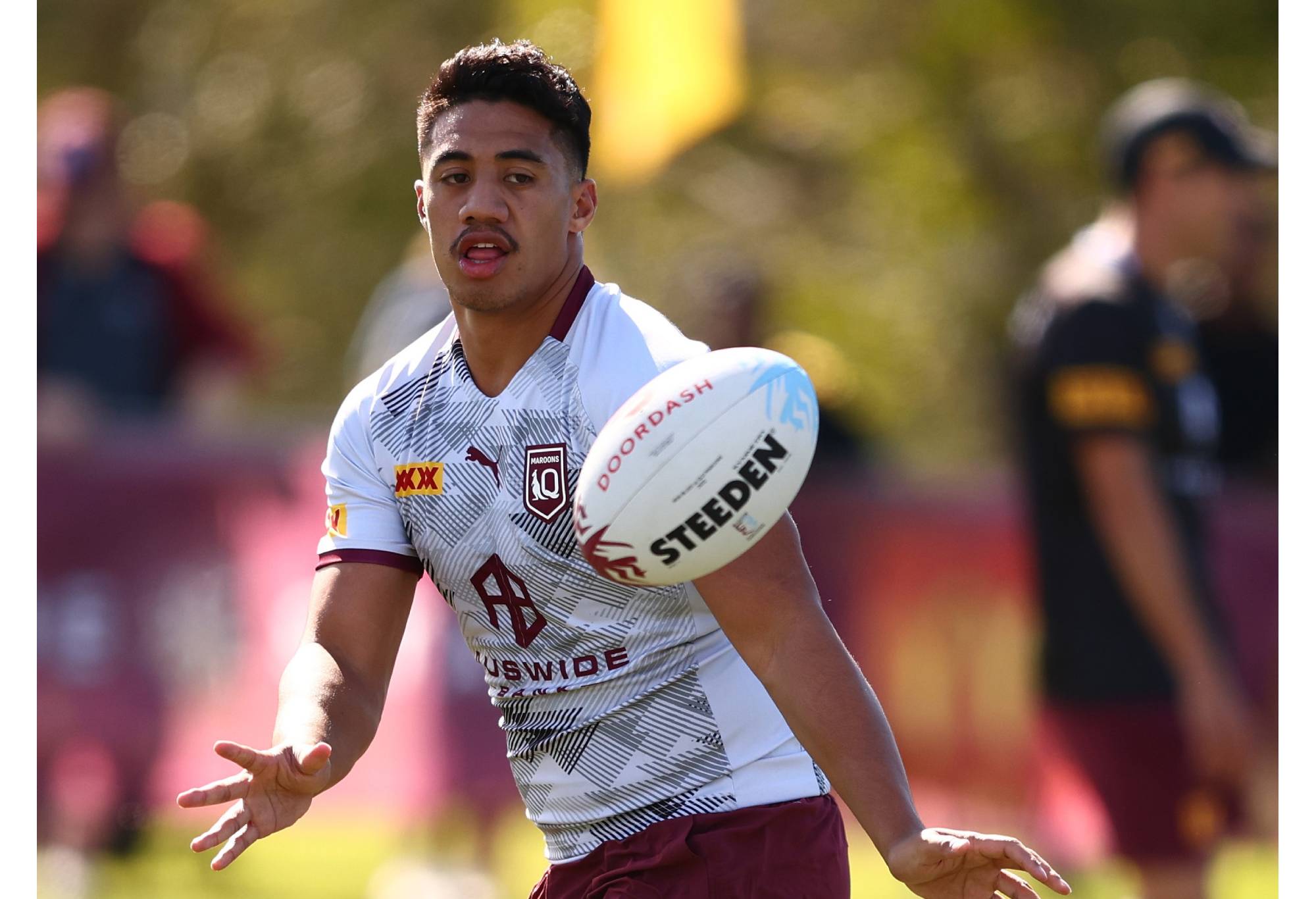 The Blues have also had a disrupted build-up with McLean ruled out after injuring his hamstring at training last Thursday.

McLean was set to make his debut and was named by Brad Fittler to start the decider against Queensland.

Instead, the Blues have handed a debut to squad member Jacob Saifiti on the bench with Junior Paulo now starting at prop. Sharks veteran Dale Finucane and likely 18th man Jack Wighton are still in the squad after the 24-hour before kick-off reduction.

Blues reserve Nicho Hynes was also ruled out after contracting COVID last week and was replaced by Chad Townsend.

Game three is in Brisbane on Wednesday night with Queensland needing to win to prevent NSW from lifting the shield for the fourth time in five years.

1. James Tedesco: Was super important to NSW getting on top in Origin II and if not for Nathan Cleary’s star turn, he would have been player of the match.

2. Brian To’o: Scored a crucial try just before halftime in Perth and made a game-high 261 metres with 101 of them post-contact. To put that in perspective, his post-contact tally was more than the overall effort of all but four of Queensland’s 17 players.

3. Matt Burton: Showed in Origin II that u can still be a key kicker in general play even if your position is centre. The emergence of the Bulldogs Bomber gave Nathan Cleary extra space to plan his kicks as the Queensland defenders couldn’t afford to concentrate solely on the halfback. 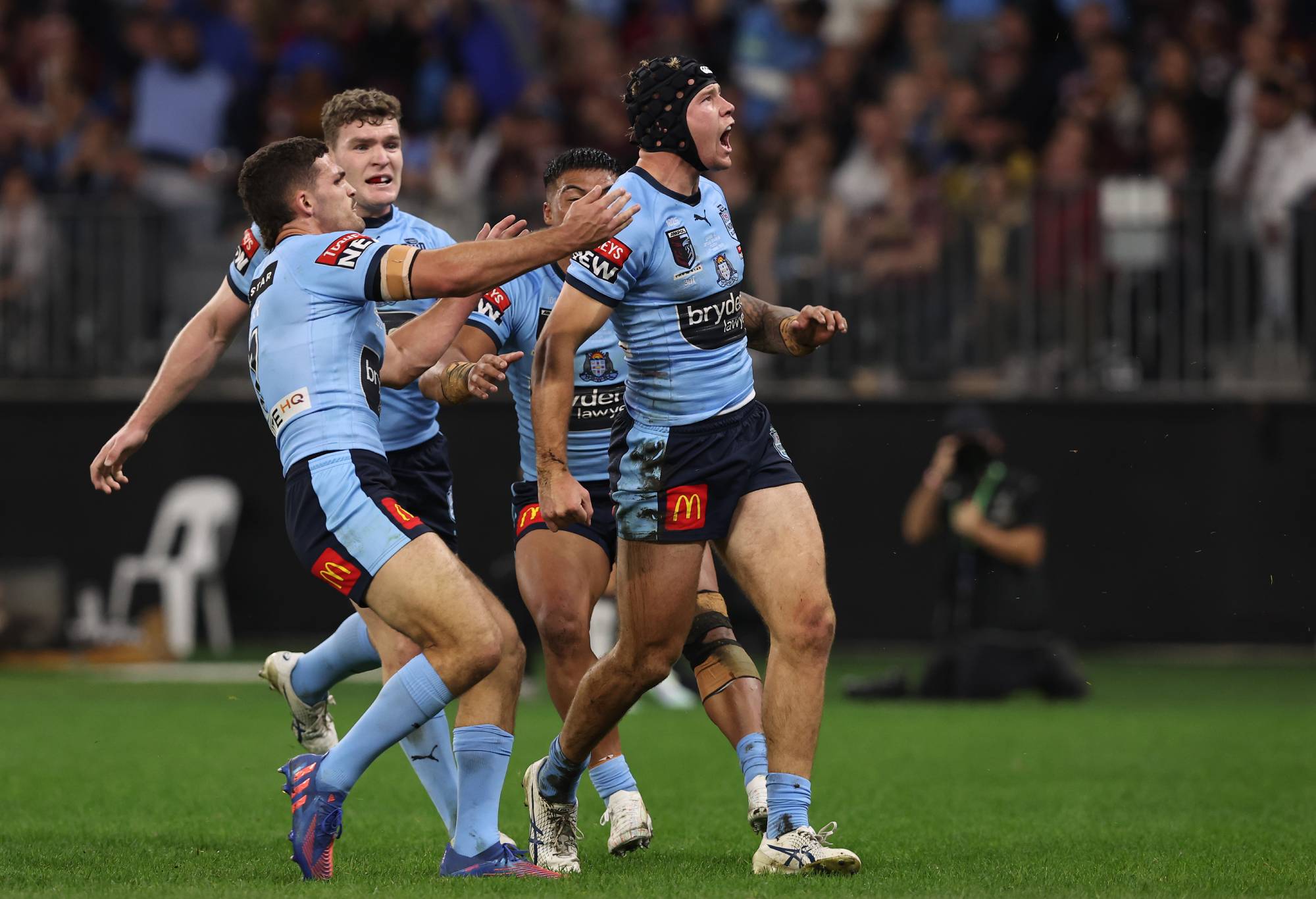 4. Stephen Crichton: Lucky to keep his spot ahead of the returning Jack Wighton after modest displays in the first two games.

5. Daniel Tupou: Hasn’t let anyone down in the two matches despite being a contentious selection ahead of Josh Addo-Carr. Made an equal game high 10 tackle busts in Origin II alongside Tedesco.

6. Jarome Luai: Stepped up in Perth after a quiet series opener. Doesn’t need to dominate but as long as he can bring an element of unpredictability to complement Cleary’s organisational skills he will have done his job at Suncorp Stadium.

7. Nathan Cleary: Anyone who genuinely thought Queensland had discovered a blueprint for shutting down Cleary in Sydney were left with egg on their face at Optus Stadium. Can all but seal the Kangaroos No.7 World Cup jersey if he gets the better of Daly Cherry-Evans in the trophy decider. 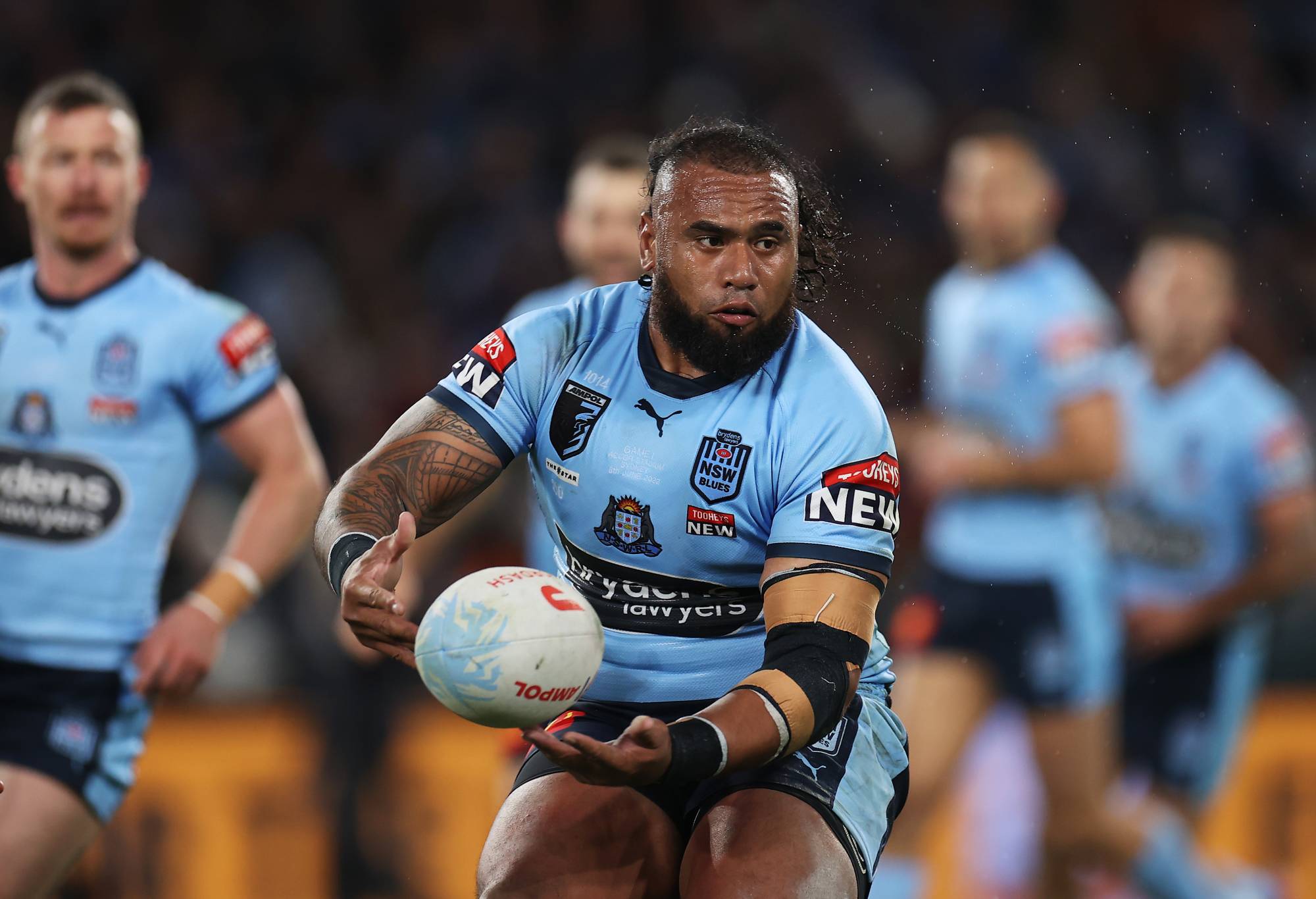 16. Junior Paulo: Responded from a lack of impact in game one with a booming display in the West. Promoted to start with Payne Haas and Jordan McLean dropping out, the Eels veteran is ultra important to the NSW cause as the more-experienced option of their only two regular front-rowers.

9. Api Koroisau: Brad Fittler’s bold decision to elevate the Panther into the starting hooker’s role paid off with Koroisau combining well with his Panthers comrades, particularly Luai, in the first half even though Damien Cook ended getting more minutes as the designated dummy-half.

10. Jake Trbojevic: As unfashionable as his haircut but effective. The Manly veteran will be unlikely to produce a moment of brilliance that will turn the result in the Blues’ favour but every minute he spends in the middle will help prevent Queensland getting any momentum. His 148 running metres in Perth was the most by any forward.

11. Cameron Murray: Has had a bit of a disrupted season with shoulder and neck surgeries preventing him from ever hitting his stride to the extremely high standards he’s set over the past two seasons.

12. Liam Martin: Is among several players in contention for a Test debut at the World Cup. The second-row contenders for the Kangaroos is stacked with talent and experience but Martin’s adaptability between the edge and middle will count heavily in his favour.

13. Isaah Yeo: An overlooked part of Yeo’s rise to being the best lock in the NRL is his combination of size and skill. He took plenty of petrol out of the Queensland tank when they were trying to bring him down at Perth while also hurting them on the scoreboard by doing early lead-up work to a few of the Blues’ seven tries.

14. Damien Cook: Took his demotion to the bench on the chin and responded with his best Origin performance since the start of last year. Only made a few runs from dummy-half but his creativity and quick passing kept the markers guessing.

15. Angus Crichton: Scored a late try in Perth but an illness on game day limited his output.

8. Jacob Saifiti: A controversial selection ahead of Reagan Campbell-Gillard with the Newcastle prop producing inferior stats this season compared to the Eels veteran. League fans should be used to Fittler making gut calls at the selection table by now and mostly, he gets these decisions right or they don’t matter in the end.

17. Siosifa Talakai: Received limited minutes at Optus Stadium but Fittler often does that with bench debutants before giving them a significant uptick the next time around. It wouldn’t surprise to see him brought on as one of the first couple of subs midway through the first half in Brisbane.

Jack Wighton is expected to be 18th man ahead of Dale Finucane with Clint Gutherson, Reece Robson and Chad Townsend already missing out on the game-day line-up.

1. Kalyn Ponga: Has been effective in patches on the offensive end but will need to do more with Cameron Munster sidelined with COVID-19. Should be fresh after not playing after Origin II due to the short turnaround into the next club game for Newcastle following his head knock late in the Perth clash.

2. Selwyn Cobbo: A topsy-turvy start to his first Origin series with a tough outing in Perth tarnishing his golden debut in Sydney. Will be targeted again by the Blues kickers.

3. Valentine Holmes: Was busy enough at Optus Stadium without ever getting much of a chance to swing the momentum.

4. Dane Gagai: No Maroons player seems to thrive on emotion more than their veteran centre so he should feed off the Suncorp Stadium crowd energy. Will look to rush up better on Burton when he winds up for a bomb. 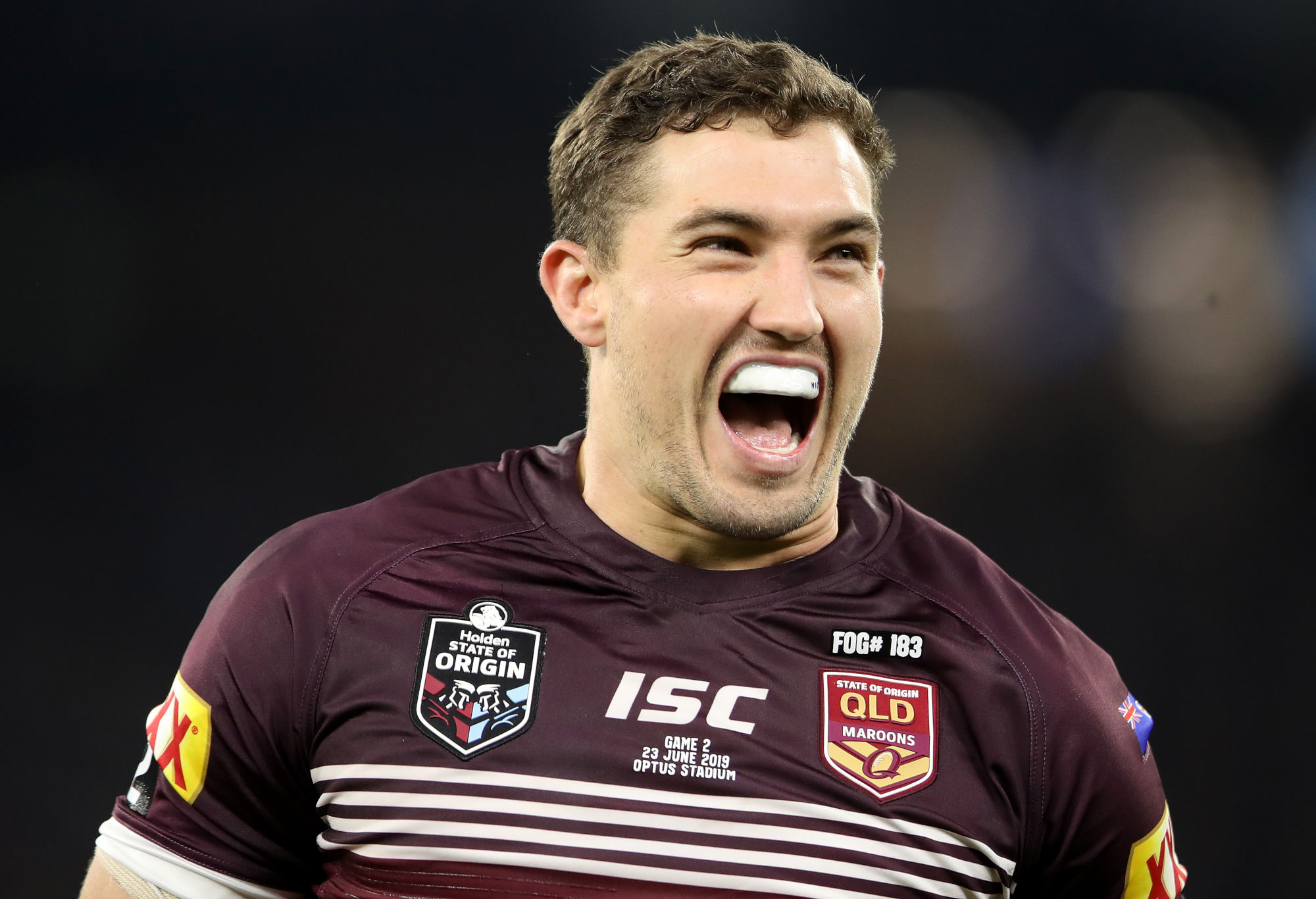 5. Corey Oates: Gets a late call-up after Murray Taulagi was struck down with COVID-19. Was probably unlucky to be overlooked for Taulagi in the second game after a career renaissance at the Broncos in 2022.

6. Tom Dearden: There is speculation that he will be benched to be the utility who may only be used as a back-up dummy-half when Harry Grant needs a spell with Ben Hunt starting at five-eighth. If he starts, Dearden will get a baptism of fire from Liam Martin if he slots into Munster’s left-edge playmaker role.

7. Daly Cherry-Evans: The fact that his four tackle busts was the highest tally by a Queenslander in Origin II more than partially explains why his team went down by 32. Needs even more support this time around with no Munster making mayhem.

8. Lindsay Collins: Just six hit-ups for 47 running metres in Perth. If he wants to stick as a long-term Origin player, those numbers won’t cut the mustard.

9. Ben Hunt: Has only had two chances in the halves at Origin level and has never really made the kind of impact he’s done when playing hooker. 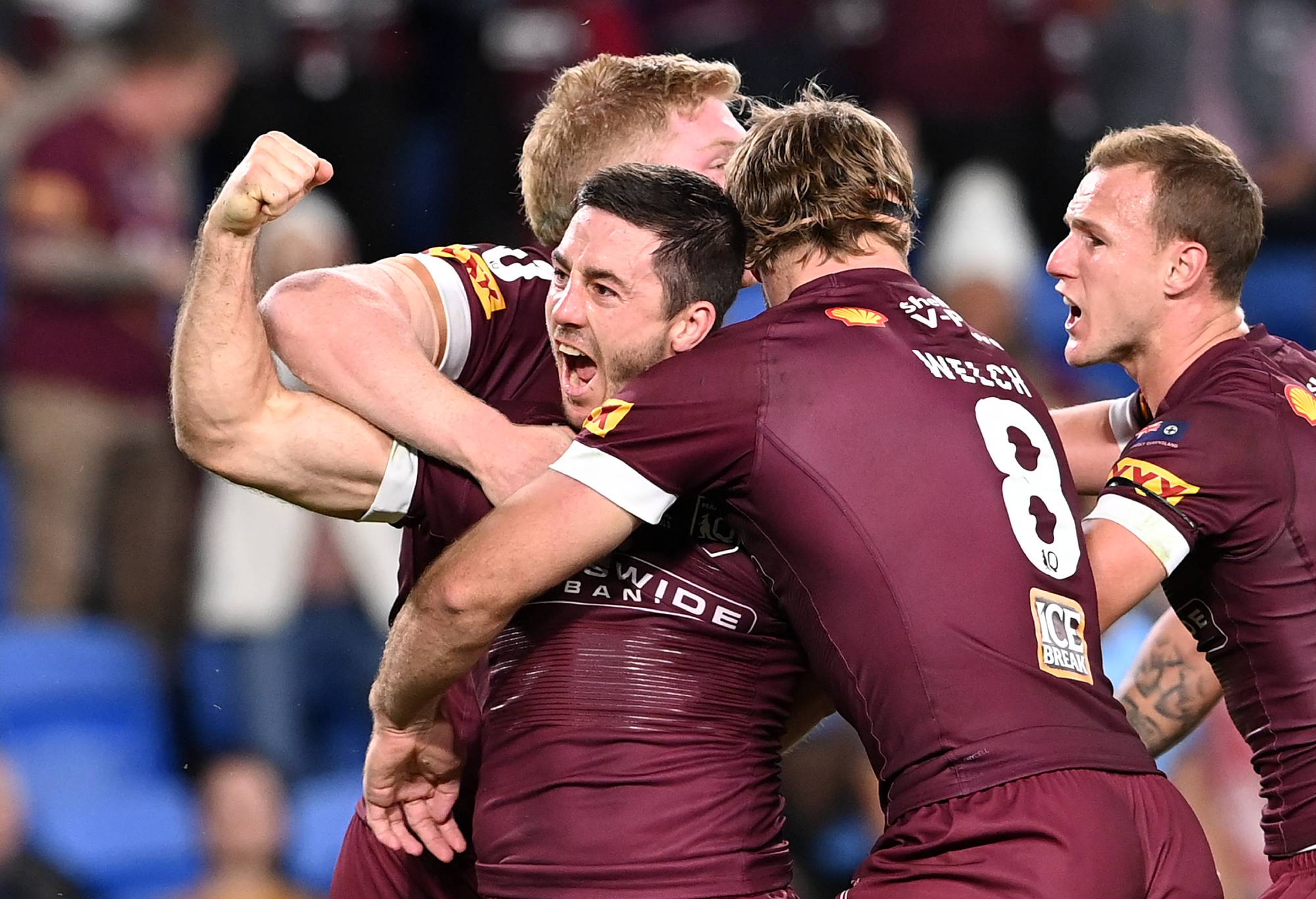 10. Josh Papalii: Over the hill or underused? It’s telling that Billy Slater has barely used him in both games. The Raiders veteran is clearly not delivering the kind of impact the coach wants in his first spells.

11. Kurt Capewell: Without experienced second-row comrade Felise Kaufusi this time around, his veteran leadership for a pack filled with younger teammates is even more important in the series decider.

12. Jeremiah Nanai: Getting his first start for the Maroons with Kaufusi unavailable due to personal reasons. He doesn’t need to overthink his role, just roam with the killer instincts he’s been displaying for the Cowboys this season.

13. Tino Fa’asuamaleaui: It would be great for Slater to be able to use him in short bursts to cause havoc but with so many inexperienced teammates in the forwards, he will probably need to play longer minutes without winding up off the back fence.

14. Harry Grant: Hasn’t had the benefit of scooting from dummy-half into a scattered defensive line like he does so often at NRL level with the Storm. If Slater pulls a late switch and Grant starts, it will also mean he won’t be up against already fatigued opponents when he first comes on.

15. Jai Arrow: Got a chance in Perth after being 18th man in the series opener. Didn’t make the most of it and with so many young Maroons forwards stepping up to Origin level and Christian Welch back from injury next year, Arrow needs a strong performance to remain on the Queensland radar.

16. Patrick Carrigan: Would not be a surprise to see him get a start after being Queensland’s best forward across the first two games in what will be the first of many years in a Maroons jersey.

17. Tom Gilbert: North Queensland have viewed this 21-year-old as a rep star in the making for a few years and Kaufusi’s absence opens the door for the Dolphins recruit. Will not die wondering when thrust into the cauldron but can sail close to the wind with his tackling on occasions.

Tom Flegler is pencilled in to be 18th man for the second straight match ahead of Hamiso Tabuai-Fidow, with Roosters rising star Sam Walker and Beau Fermor already announced as unused squad members.