How will the Super Rugby Pacific final impact All Blacks selection?

In the end, it was all just too one-sided for comfort. The final score-line of 21 points to 7 does not really reflect the extent of the Crusaders’ grip on the final of Super Rugby Pacific 2022, played out on the lush green turf of Eden Park in Auckland.

The result, coming at a time when the Blues seemed poised to take over the mantle of the top Super Rugby franchise in New Zealand from their brethren in the South Island, will give the selectors of the national side a serious pause for thought.

That moment of reflection will be two-fold. The first note will be earmarked in the back row, where a Crusaders’ unit containing no current All Blacks at all outplayed a Blues trio which eventually featured three members of the current squad picked for the Ireland series: Akira Ioane, Hoskins Sotutu and Dalton Papali’i.

The second, which will probably be asterisked and highlighted in glowing, lurid pink, will be against the midfield. The Blues 10-12-13 axis of Beauden Barrett, League convert Roger Tuivasa-Sheck and Rieko Ioane has been talked up with ever-increasing hyperbole in the Kiwi media, but in the event, they came second best to the combination of Richie Mo’unga, David Havili and Jack Goodhue – not by a nose but by a generous furlong.

There has been a momentum building for the Blues’ triangle to make the move from Super Rugby to international level, and most of the yearning is for Tuivasa-Sheck to fill the vacant spot between Beaudy and Rieko.

At the start of Super Rugby Pacific in mid-February, Sir Steve Hansen was enthusiastic about the possibilities:

“He [Tuivasa-Sheck] has got a great mentor in Leon MacDonald up there, he’s doing a fantastic job, so I think he’s got a real chance. If he plays well, why wouldn’t ‘Fozzy’ [All Blacks head coach Ian Foster] and his team be excited about having him? He’s an athlete and a half.”

[From an interview with Newstalk ZB]

By the end of May, that initial optimism had been replaced by a developing certainty in the mind of another knight of the realm, Sir John Kirwan:

“He [Tuivasa-Sheck] will definitely make the All Blacks, because he brings something different. When you think about New Zealand rugby, traditionally we have had 12’s that would get us over the advantage line. The Ma’a Nonu’s of this world. But Roger does that with his feet. I think he has adapted really quickly.”

“And there are only 18 Test matches to go, right, until the World Cup? So, it’s going to fall in [his] favour because you have to pick him now, you have to play him. You have to know this time next year… that he is going to be good enough for that level. I am convinced he will be.”

Move the hands of the clock forward to quarter-final round against the Highlanders on 4th June, and Sir John’s opinion was reinforced by those two excellent commentators on the Aotearoa Rugby Podcast, ex-Blues hooker James Parsons and current Crusaders’ halfback Bryn Hall. First, Parsons:

“I think it was Roger’s best round [in the quarter-final against the Highlanders]. I just think he was fantastic not only on attack but defensively he seems to be just getting better and better each week. In a big match, when they were under pressure he really stood up and delivered.

“When he busts through that line it would have been so easy to give the inside ball to Beaudy. But he gives it to Rieko which commits that last defender.

“It’s little decisions like that, which you don’t think too much of, but there is considered thought at running at full pace to make sure that the five-pointer is scored.

“Roger is just getting better and better. He looks ready for that [Test match] level of intensity.”

You can see the try Parson was talking about here [at 3:10 on the reel]:

Hall chimed in supportively, “I think that game puts him in the All Black frame.”

Almost all the commentary about Tuivasa-Sheck’s improvement has occurred in the context of his contributions on attack. There has been relatively little about how he might contribute to the kicking game, and on defence. That probably tells you a great deal about the blind spot in New Zealand rugby observations as a whole.

Even a cursory run-through of that Highlanders highlight reel will tell you just how devastating Barrett, RTS and Ioane can look when they get LQB from the ruck, with a chance to showcase their multi-skilled wares with ball in hand. But as a unit they have nothing like the balance of options that the Crusaders trio present, game in and game out.

What does that balance mean? Let’s take a look at some concrete examples from the final itself. Richie Mo’unga does not kick the ball away when the kicking option would bring his team under pressure:

Richie sees that Hoskins Sotutu has over-committed to the expectation of a clearing punt off his right foot, and he exploits it with a run that takes him past no fewer than four Blues defenders up to halfway. There are two dummies to put boot to ball along the way.

The Crusaders midfield is at its best when it keeps the balance between kick, run and pass perfectly intact: 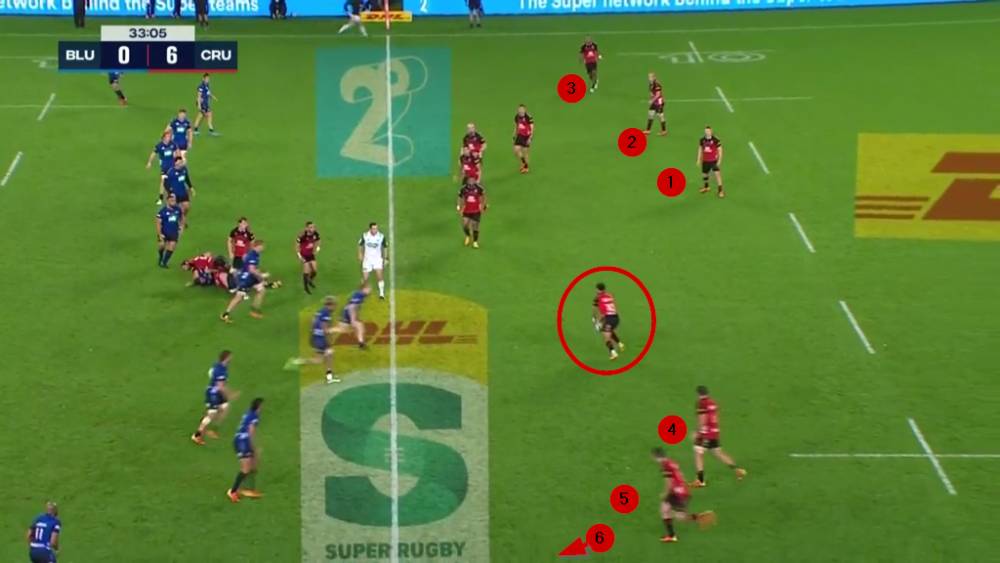 When the ball is delivered from a centre-field ruck, Mo’unga can go right or left with the pass, or he can kick for the corner with a 50/22 attacking lineout in view. He picks the third of the three options.

He cans also swap roles seamlessly with David Havili, in a way that Beaudy and Roger cannot: 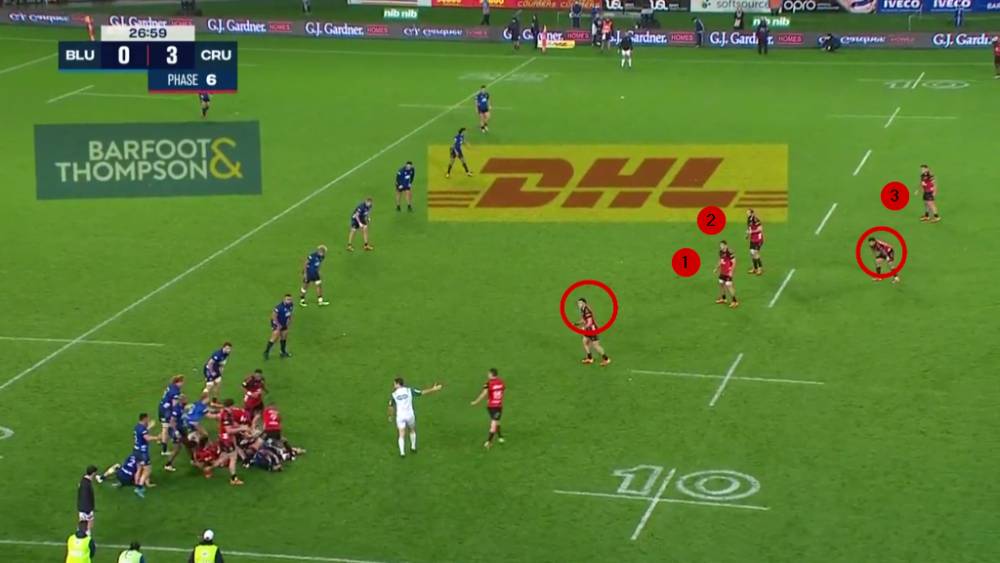 Again, the ball can be played out by hand through either the first or second line of attack, with three forwards and two natural distributors in the frame. Or Havili can simply chip the ball through for Richie to regather in a neatly ironic reversal of their usual roles. That is pretty good work for ‘yesterday’s man’.

With Mo’unga out of the picture in backfield defence after yet another Crusaders lineout steal, David Havili proved he is expert at comfortably filling in for the number 10 with a 50/22 kick of his own:

There has been no evidence in the Super Rugby Pacific season to date to suggest that Roger Tuivasa-Sheck is capable of this kind of sophisticated interplay with his number 10. It is often expanded to include centre Jack Goodhue as well:

The play works as smooth as silk, with Goodhue rescuing the looped pass from prop George Bower and handing on for Havili to slide another sharp stiletto off the right boot into the Blues in-goal area.

It was in the clash between Blues’ back-line attack and Crusaders back-line defence that the red & black midfield demonstrated its greatest superiority: 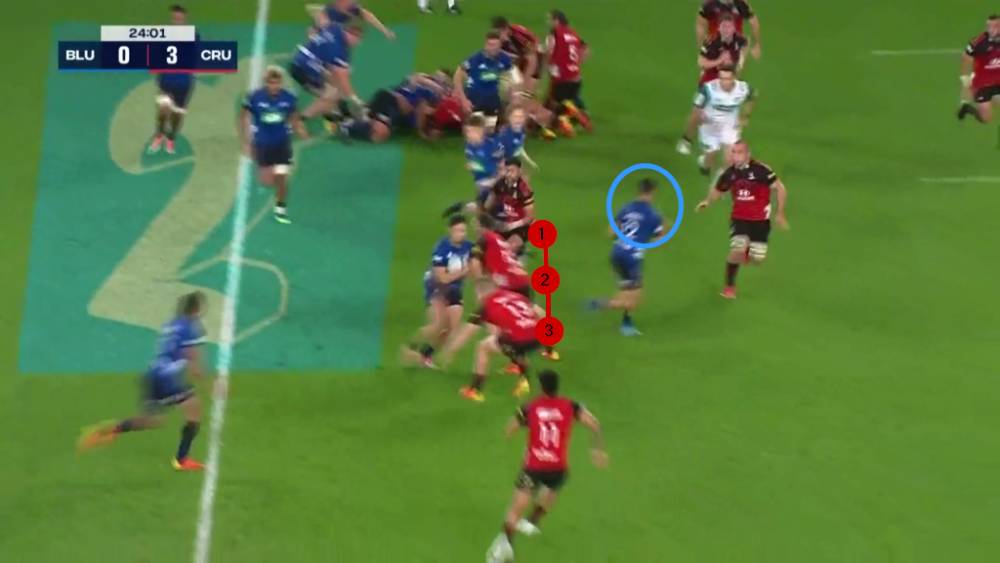 From a Blues scrum on halfway, Havili and Goodhue feel confident enough to write off the decoy run of Tuivasa-Sheck on the short ball and double up on blind-side wing Adrian Lam. That is a real worry for any midfielder who wants to become a Test-match number 12.

When either RTS or Rieko tried to explore the channels outside the Crusaders’ centre pairing, they were reeled back in and exposed to the rude reminder of a snappy, effective counter-ruck:

As the second half progressed, some of Beauden Barrett’s worst traits as a first receiver began to re-emerge under cross-examination from the red & black midfield: 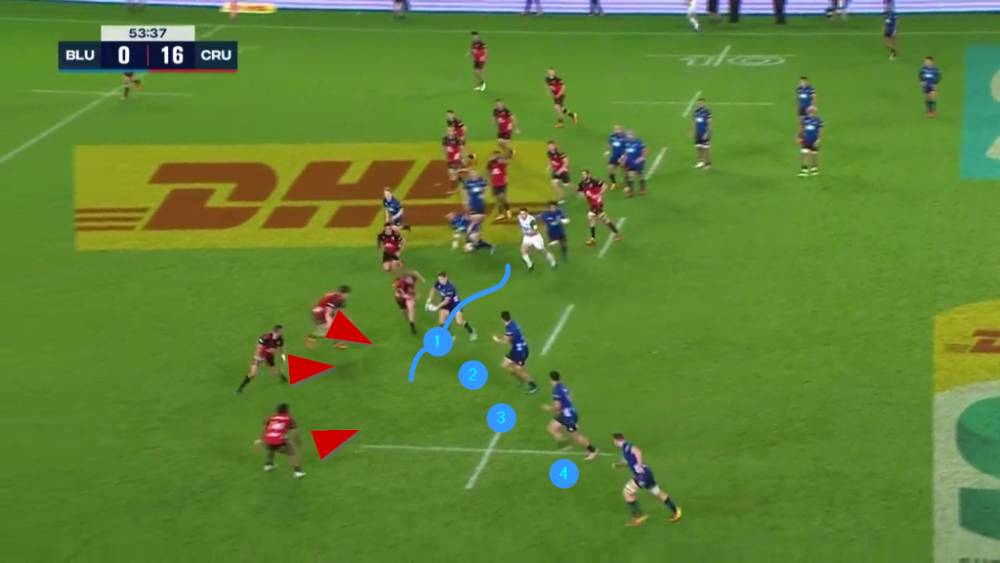 This is Barrett feeling the pressure, running laterally and smothering the space for his outsides. By the time Bryce Heem receives the ball, there is absolutely nothing he can do except tip it on hopefully, against the odds.

Once again, Barrett runs sideways and towards the Blues’ receiver outside him, leading the defender into the space he wants to exploit and forcing the fumble directly. It is the kind of play from a number 10 which encourages the defence far more than the attack.

From the outside, it has looked as if the yearning for Roger Tuivasa-Sheck’s inclusion in the national side, and the transposition of the entire Blues midfield into a Black jersey has been pushed along rather too quickly for comfort.

Some highly influential voices in New Zealand rugby have been driving the agenda forward, but the runaway train came to a grinding halt in the final of Super Rugby Pacific, as the Blues ran out of puff in almost every area of the game.

They could neither win ball, nor use the little ball they won consistently well. In the process, the Crusaders 10-12-13 axis of Richie Mo’unga, David Havili and Jack Goodhue showed up much better than their opposites in every aspect of midfield play that mattered.

They were superior in contact, they maintained the option to kick, run or pass for longer, and they neutralized the Blues trio on defence, eventually forcing a player as great as Beauden Barrett back towards some of his worst habits as a number 10. Rugby is not just about producing moments for the highlight reel, after all.

It was an unpleasant reminder of ‘Finals’ reality, as much for the All Blacks selectors as anyone else. This much is certain: nobody will be happier than Ireland head coach Andy Farrell if he sees those three Blues running out together in black at Eden Park on July 2, for the first Test of a series which could become one of the greatest in recent memory.

I’ll be back on Friday with an England Tour special of Coach’s Corner.

Here’s How Accounting Can Help In Your Small Business