“If you’re going to say ‘Welcome to My Nightmare,’ don’t just say it… give them the nightmare”: Alice Cooper visits UB 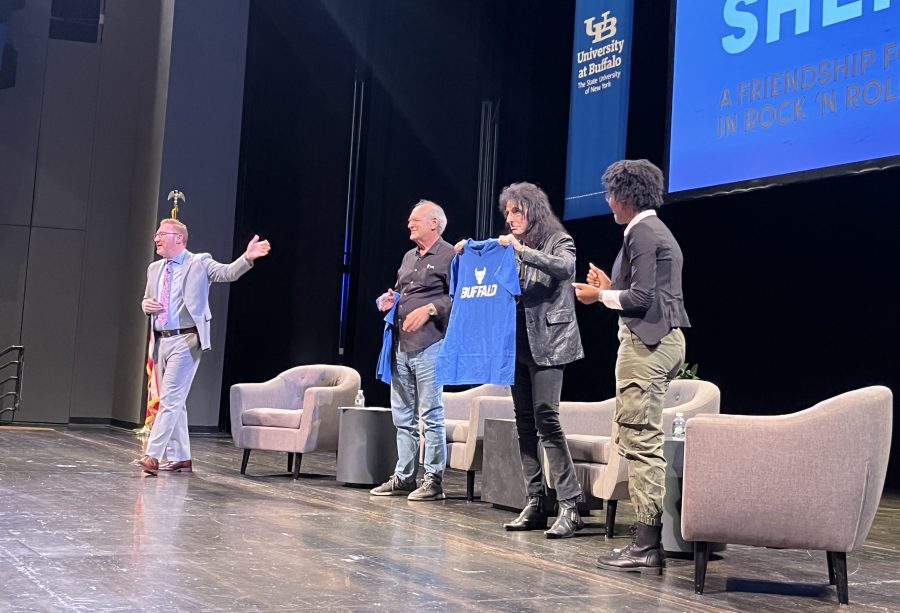 AMHERST, N.Y. (WIVB) — “We started out as a lie,” Alice Cooper said Tuesday afternoon during his talk at the University at Buffalo’s Center for the Arts. “He said he was a manager and I said I was a singer.”

Cooper’s longtime manager, Shep Gordon, joined Cooper for the talk, titled “Alice and Shep: A Friendship Forged in Rock and Roll,” in which they discussed their longstanding friendship and business partnership, as well as the construction of the Alice Cooper character, Alice’s music career, and his Tuesday night show at Shea’s in downtown Buffalo.

Cooper made sure to clarify that the man the crowd saw before them was not the character that would take the stage at later in the evening.

“Alice Cooper the character plays tonight onstage. I’m not him now, but I’m excited to play him,” he said. “Because he’ll be this condescending villain.”

Cooper and Gordon have been friends and business partners for 53 years, never having a contract between them, and having immense trust in one another.

The pair discussed the construction of Cooper’s character. Cooper said he saw a lot of ‘good guys’ and hero types amongst rock stars of the time, but wanted to play an evil character.

“There were all these Peter Pans and no Captain Hook,” he said. “I thought, ‘I’ll be Captain Hook.’”

In addition to the character, Cooper also discussed building his famous act with horror elements.

“If you’re going to say ‘Welcome to My Nightmare,’ don’t just say it… give them the nightmare,” he said, adding that parents hated the band. This led to the group marketing toward those parents’ children.

“Alice only wanted to be onstage. He wanted to live there, so I left him there,” Cooper said.

Welcome to My Nightmare: Making it, pre-internet

Gordon said the two ways to make it as a musician in that time were through the press or through the radio. Knowing nobody wanted to pay to put Alice Cooper on the radio, the group opted for the former. And Alice, a former journalism student, said he knew a tabloid headline like about a boy born with a dog’s head would sell better than a story about Nixon cutting taxes.

The allure of the Alice Cooper productions got the band in the media and got kids buying albums. Cooper said the band felt embarrassed as their music climbed the charts over artists like The Beatles and The Rolling Stones.

Gordon reminisced that when it came to sell the band abroad, Gordon turned to local news in London to see what the biggest stories were.

Gordon explained that they got a truck driver who was willing to be arrested, put a large photo of a nude Cooper with a large snake wrapped around him, covering his private parts, then parked the truck in Piccadilly Circus — the busiest part of the city, to ensure it got on TV.

“They tried to ban Alice Cooper from London. The show sold out in 18 hours.”

Cooper said he began to see the affect the band had on its audience, as kids were wearing top hats and makeup, dressing as Alice.

Gordon broke down the process of playing a prank on the City of Buffalo years ago, in which he and several others created a fake world leader, having a friend in New York City send the Queen City’s then-mayor a letter from the Western Union inside the United Nations. He said the mayor reserved a room for the figment and the story ended up in the Buffalo Evening News.

“My intentions were strictly to make a living and buy us dinner,” Gordon said. He later added that Brockport was the first place in America where Alice was banned.

Gordon and Cooper were first introduced by Jimi Hendrix, however, the pair also recalled humorous interactions with other legendary artists, including Frank Zappa, Salvador Dalí, and the Muppets.

Salvador Dalí: Cooper discussed a dinner he had with Dalí, in which, in lieu of paying the bill, Dalí signed the tablecloth, making it worth more than the bill cost. “I’ll get the tip,” Cooper responded, signing underneath Dalí’s name.

The Muppets: Cooper credited his appearance on “The Muppet Show” with being one of the most effective things for the character. It humanized Cooper, drawing a line between the character and the man behind the makeup. “I’ve never had more fun in my life,” he said. He drew laughs from the audience when he explained how easy it was to begin talking to the Muppets as if they were actual people.

Cooper credited Chuck Berry, whom he called the “best lyricist of all time” for inspiring him to write music the way he does. He explained that many of his songs start with the title and then write themselves from there, using “School’s Out” as an example.

As far as his past music goes, Cooper said he still enjoys performing those songs, but is not as sentimentally attached as he used to be.

“I don’t sit around thinking of my songs being ‘precious,’” he said. “I’m worried about the next album.”

Following the talk, Cooper and Gordon were presented with UB t-shirts, which they displayed proudly.

So it’s Collingwood versus the SCG