It is not just the mouth; poised as if to inhale a slug or oyster. Not just the sardonic eye roll which has that glint of the love of farce. No, it is the slant of the shoulders, the open palms, the ‘I don’t care that I am adding these documents to your request to open a bank account in Lyon even though last week I told you we only needed the passport and visa,’ the bemused elbow posture–so tight and tucked, the prolonged ‘ouiiiiii’ which means ‘non,’ the question within the question represented by the shrug itself, and the timing, oh the timing of the shrug, designed to suck the marrow out of your impending joy.

As I’ve noted before on these pages, France is a miniature paradise populated by people who believe they abide in Hell. They long to drag you into that Hades.

Having lived in Lyon for a couple of years not too long ago, because of an investigation which took me all over France and contiguous lands, I marvelled at how stark the contrast was between the ‘violence’ of a French shrug in a boulangerie or bank or barber shop (whether Lyonnaise and slow, Grenoble noble, Breton smartarse, gangster Marseilles, nice Nice, provincial Provencal, brutal Clichy, saintly St Etienne, or straight up Strasbourg) and the shrugs of Germans, Belgians, Swiss and Spaniards.

And they shrug generally, in their faded grandeur, at the world wrought by ‘Anglo Saxons’ (their term, not mine) even as it exists in Melbourne. Uncivilised, too open, too direct, and stripped of the beauty of hierarchical norms.

Go to a wedding, any wedding, in France, in any town, at any socioeconomic level, and you will dance to the third song (“It’s Raining Men”) and eat the same dessert at 2 a.m. and smoke the same and hear the same toasts. The uniformity of architecture and law and education (every child is on the same lesson on the same day) masks a constant revolution about to burst forth in violence.

Law, a precise law, is their answer. But capriciously applied. With a shrug. And responded to with a ‘this is life and it sucks’ shrug.

The shrug is reflected in Napoleonic codes of law. Whereas Australia and other former colonies of England have slender canons, abstract constitutions capable of adaptation (even if decades in the lag), a seamless web of precedent, a common law designed to reflect yeomen’s common sense in commerce and tort, and a subtle evolution (Smith v Jones said this so Jones v Smith must say this), the French law is mammoth and tries to anticipate every occurrence and assign an outcome. Certainty is the goal, but of course, people are people and they have friends in high places, so French jurisprudence is a bit messier than it is designed to be.

“If a dog bites a man, but the dog is not owned by the man, and the man bit the dog first, and the dog was claimed to be owned by a woman, and the woman then denies it is her dog, and it turns out the dog is owned by the woman’s cousin, and the bite is 3 mm long, the woman shall pay the man twice his medical bills but only if he declines to pay her the whole within 72 hours of written notice.”

Or: “If a team wins a penalty and chooses not to kick for poles that team must kick the ball out within ten seconds of the referee saying ten, if the referee means ten seconds, not ten for the flyhalf, with the sanction being the penalty turns into a scrum for the opponent penalised.”

Shrug! It happens! It just happened to you. A law was applied. It is a law. The law is not mocked.The same officious French referee who officiated the third and deciding Test between South Africa and the British & Irish Lions in Cape Town in 2021 made a big call to switch a Bernard Foley kick out to an All Black scrum five in the dying moments of 2022 Bledisloe Two.

One referee is a part of two very big rugby matches. In both cases, he made a call. And shrugged. 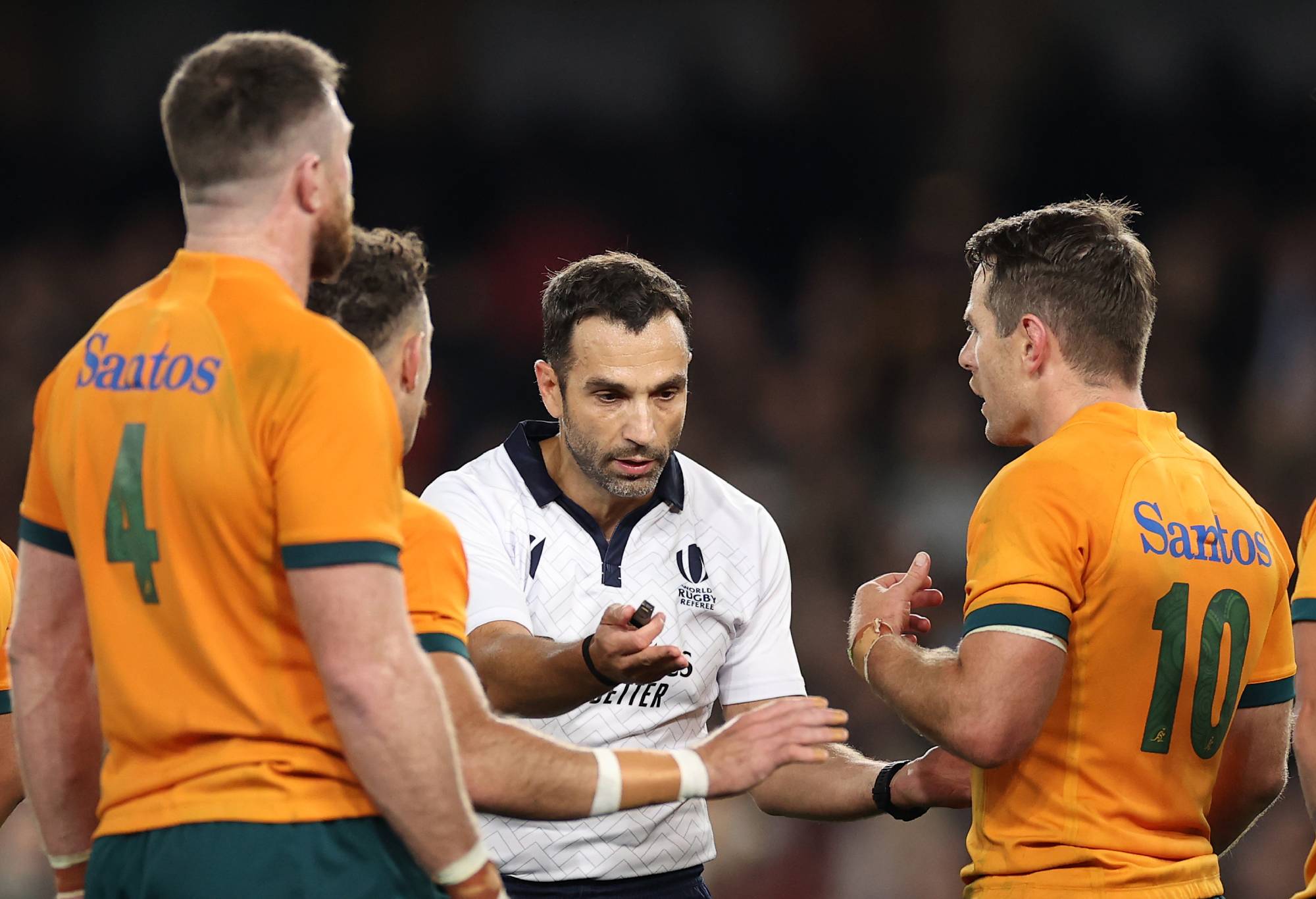 Since I think referees are too famous in rugby, I won’t say his name, but I will tell you he was born and raised in Perpignan, just north of the Spanish border, and his boyhood heroes were David Campese and Jonah Lomu. He was a good player himself, being part of a team which won the French Junior Championships in 1998.

But I must add he was a halfback. And a teacher at the Lycée Jean Lurçat in Perpignan.

And if the French shrug better and bigger than anyone, and if their sportsmen do it best of all, I will risk stating the obvious by saying a French halfback can shrug like gendarmerie on a motorcycle giving you a ticket for having a phone in your car turned on because he saw it as he whizzed by, if merged with a French schoolteacher, given teachers invented the shrug, a teacher-scrumhalf from Perpignan is the very deity of shrug.

The referee who gave the All Blacks a scrum for Bernard Foley not understanding ‘ten’ meant ‘kick it exactly now or lose it’ instead of ‘ten seconds’ or ‘ten back, All Blacks’ or ‘hi, Bernard, ca va?’ has been quoted as saying: “The first five minutes are often crucial in setting the tone.” Apparently, tone can also be set in the last five minutes.

The referee from Perpignan shrugged, and that should have been Foley’s warning. He had warned him before. But referees warn nines to use it dozens of times a match, and have we ever seen a punishment? Is it seen as an exhortation or a last and final warning? I guess the former.

The same scrum sanction could have been given on almost every non-poles penalty in the match. And there were a lot.

When in France, watch the shrug. It’s not a friendly gesture. Foley would bang it out immediately if he could know what he knows now.

A French shrug ignored, when that Frenchman has a baton or a whistle, is a big risk.

But here is the rub, as an old Anglo Saxon playwright phrased it: In our mostly Anglo common law sport, is that now the law?

Or was it an anomaly? A Napoleonic shrug and twitch, never to be repeated?

Will all referees everywhere impose a 39 second maximum on kick-outs?

Also at scrums, line-outs, and shots at goal? I have seen several kicks at goal exceed 60 or 90 seconds and they are rarely punished or undone.