Is the future of rugby in good hands?

Still some 12 hours removed from last night’s controversy and the wounds have shown no signs of healing. Perhaps writing will prove cathartic?

It’s unlikely. As unlikely as the prospect of a Wallaby victory next Sunday in the heart of Eden Park. That will neither provide closure or comfort to what is the real emergent issue that has increasingly dominated discussion, and results, since the last World Cup.

Last night’s decision by the on-field official was a symptom of a much more complex issue that is, in this amateur writer’s opinion, a danger to the future of rugby globally. As I see it, that issue is a lack of understanding, or potentially execution, in how World Rugby administers and officiates International Test match rugby.

The highest stakes and most visible ‘product’ our game has to offer. Put simply: I think World Rugby is jeopardising the viability of Rugby at the international level. 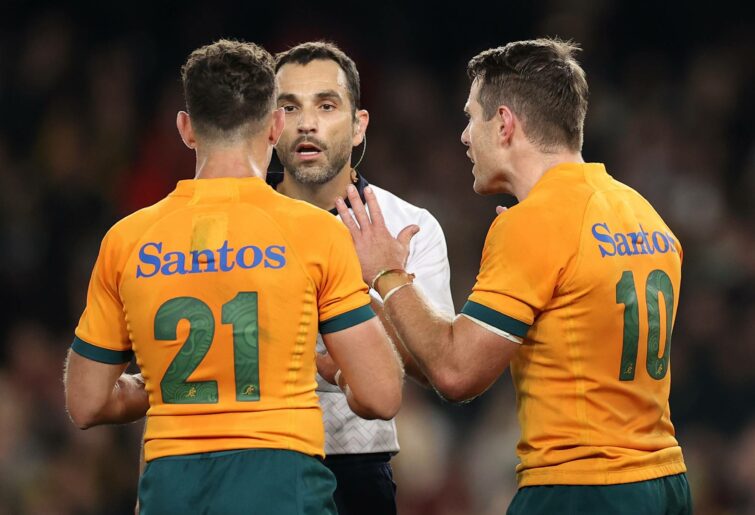 Even for the inexperienced officiator I think it’s pretty clear that Rugby is an incredibly difficult game to officiate. The beauty of the game is how often there’s a contest for the ball.

At no point is a team guaranteed possession. And every attacking foray can be met with a defensive attack that could swing the tide.

There’s nothing like it. I completely appreciate the increasing difficulty of this officiating as you progress through the ranks of professional play towards the International game. High stakes. High pressure. A high degree of accuracy is required.

I’ll fall short of broadly critiquing the accuracy and quality of referring. I think that is always subjective territory that is best left to the enthusiast press (sometimes styled as sport journalists) to clickbait articles on major headlines.

Like any one with a job, everyone is going to have days where they’re clinical and days where they would like to have had a better result. Unlike most people’s jobs, the performance of an international official is highly scrutinised and highly visible.

I can’t discount the pressure of the moment that comes with the territory at this level. It would be confronting enough to draw the ire of 15 blokes fired up and ready for some brutality. Let alone to incense a crowd of 55,000. To even work under those conditions takes a strong level of focus and guts.

Where I think the critique needs to be leveled is around the more quiet and considered moments. Those points after the game where the match is reviewed by the officiating bodies.

Where they can stop to analyse what is happening in play and take a considered approach to refine what they are asking our on field and third match officials to rule on. This is where World Rugby is failing the game.

Now, in the defense of World Rugby, this is a rapidly changing world. Greater information about how rugby affects the human body impacts the duty of care that they have towards their players, both current and future.

Policing how we can protect players’ heads and discourage behaviours that would put them at risk, is a veritable minefield to navigate. I don’t begrudge them for the difficulties in finding balance around how the game adapts here. There’s clearly some friction that is going to come about modernising the rules of engagement while preserving the spirit of the game.

What I do ask is what is an acceptable level of consistency in how the game is officiated? And what World Rugby can do to bring these interpretations of the rules between officators from the various Rugby nations.

Contrast the style of calls from Ben O’Keeffe in the Wallabies last outing against the SpringBoks and compare that to the entire match of calls by Mathieu Raynal in last night’s game against the All Blacks. You could convince me I was looking at two very different sports.

Or at least the same sport from different eras.

The National Provincial Championship (currently called the Bunnings Warehouse NPC) has long been a guilty Rugby pleasure of mine to enjoy.

Even without a team to support, there’s fast, powerful, skilled rugby on display from game to game. The contest is something to behold. That competition, as a product, is very enticing to watch. I seldom find myself thinking about the official or their presence within the game. 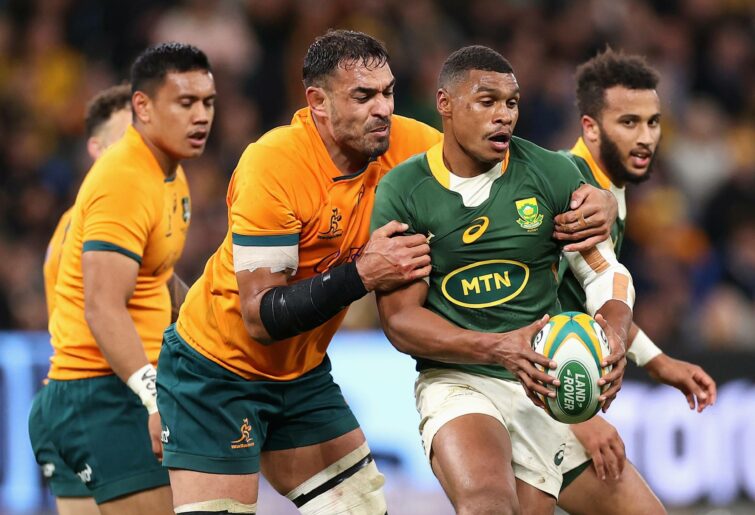 The officiating issue seems to be exasperated in the International contests. The requirement for test matches to be officiated by an individual that does not represent a union connected to either of the two teams is the right one. The variation in how different region’s officials interpret the game means that this requirement opens a Pandora’s box of issues.

This has become more pronounced in 2022 as the role of the TMO has continued to expand, whether that is deliberate or incidental. As a viewer, it can seem that there are times there’s a tug of war between the on field official’s approach to the game and that of the TMO. That’s not the contest that people are tuning in for.

The importance of last night’s match was heightened for Wallabies fans given the amount of time it has been since they held the Bledisloe.

Reverse the roles on what happened last night. What if the Wallabies were the victors under these same circumstances and New Zealand the victims. Could that not have been the end of Ian Foster’s career?

Would Wallaby fans feel a sense of accomplishment if that decision swung the Bledisloe Cup this way? After so long an absence I can’t help but feel it would be an empty victory. 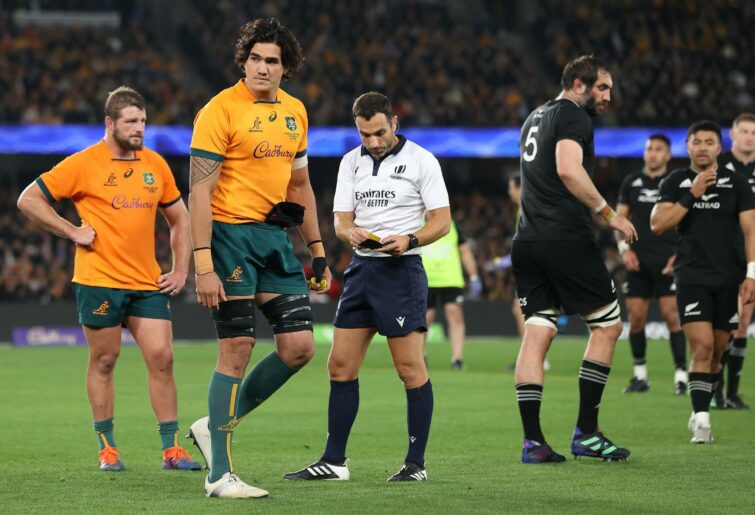 Darcy Swain of the Wallabies leaves the field after receiving a yellow card during The Rugby Championship & Bledisloe Cup match between the Australia Wallabies and the New Zealand All Blacks at Marvel Stadium on September 15, 2022 in Melbourne, Australia. (Photo by Cameron Spencer/Getty Images)

As it stands, that didn’t happen. But that is one more loss on the resume for Dave Rennie. A statistic that will not come with an asterisk when looking at the overall performance of the Wallabies through this year.

In the court of public opinion that loss will still count. The Bledisloe will still be held across the Tasman for another year. The result still stands.

In truth, this problem goes beyond one officiator’s actions in one particular game. It will come to define the contest that we head towards in 2023.

The World Cup is the centrepiece of our game. The contest by which we will attract new fans to the sport and generate a new generation of interest in play for your nation.

If World Rugby does not address the chasm of difference in interpretation and implementation of the rules then 2023 could stand as a critical opportunity missed for the growth of the game we know. This could have significant ramifications for the economic viability of International Rugby for the decades that follow.

As a fan of the game I want to see this sport flourish. I want to be lucky enough to see my children’s children take up the ball and pack it down. To experience the rush of game day, as a player or a fan. And to share in the camaraderie that comes with playing a sport so diverse as Rugby. We fans might own the game, but World Rugby has a title on the viability of its future.