‘It sucked, I felt I let my team down’: How Noah Lolesio dealt with Super Rugby drop kick pain, and how his mates reacted

Time is relentless. Contrary to sports mythology it never stands still. You can’t ever wind it back but you can remember and learn, and there is no more brutal classroom than Eden Park with 90 seconds left in a Super Rugby semifinal when you’re a point down on the scoreboard.

Noah Lolesio’s brain made a decision, there was little wrong with his execution. The Brumbies fly-half’s drop goal attempt left the boot just right, then was rudely interrupted by the meaty claws of Ofa Tu’ungafasi.

You’re 22, an illustrious, long-term career is certainly on offer but not yet assured. How do you deal with that?

Humour is one form of medicine.

“If it goes an inch higher and goes over the middle he’s probably asking for another zero [on his contract],” joked Brumbies teammate Nic White on Thursday.

When Lolesio caught up with Quade Cooper in Wallabies camp, he says the veteran had “a little joke with me. He asked me if I thought I hit it sweet and if it was going over. And I was like, ‘oh yeah surely!’ I guess we’ll never know, hey?” 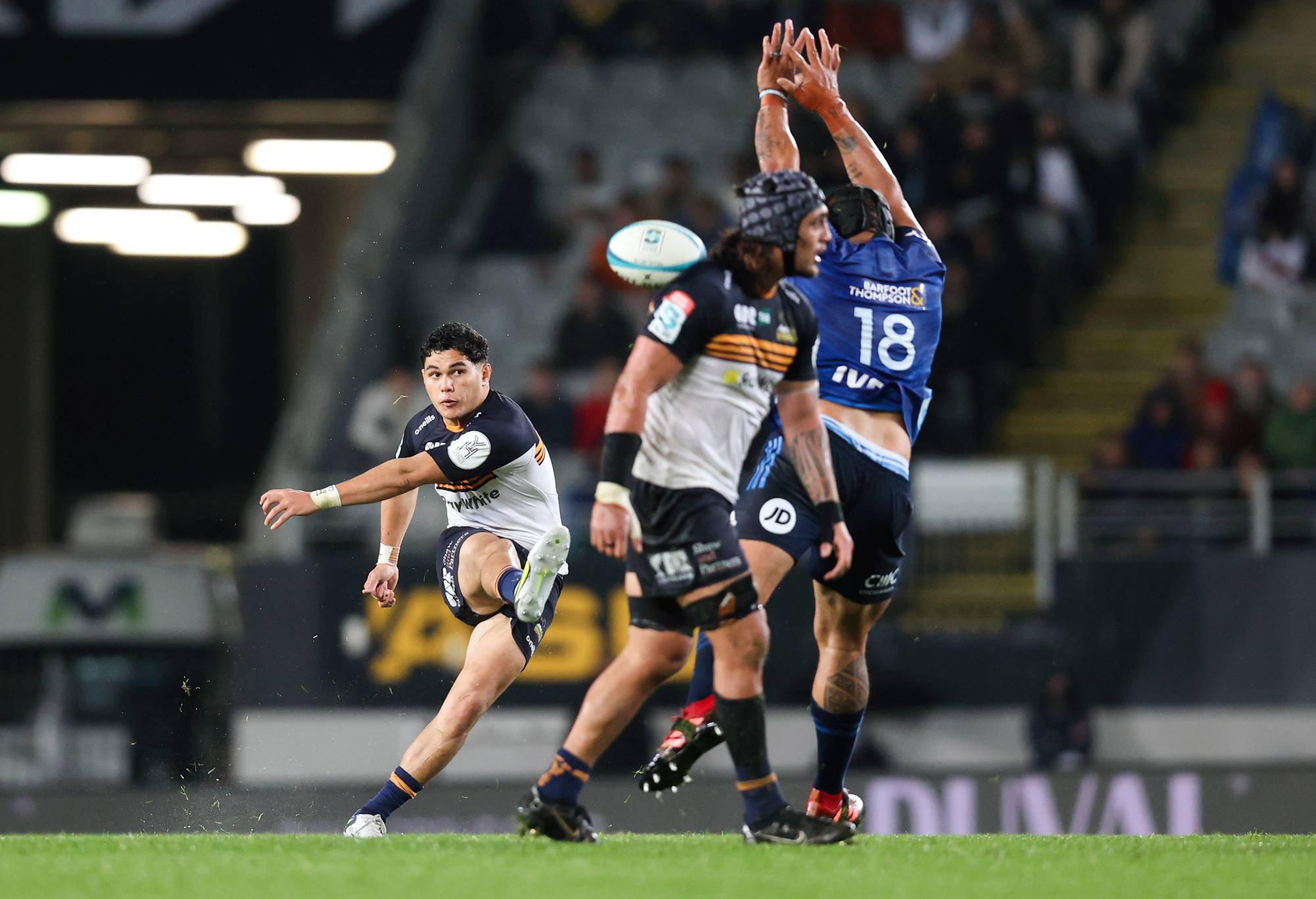 Noah Lolesio of the Brumbies has his attempt at a drop goal charged down by Ofa Tuungafasi of the Blues. (Photo by Phil Walter/Getty Images)

The pain in the immediate aftermath required a different type of treatment. Time is relentless but also a healer.

“When you’re out in the field, rugby is a pretty fast paced game, and you’ve got to make decisions very quickly,” Lolesio says.

“I was planning in my head to go for the drop kick, but I probably got the ball earlier than I expected it. So I had the plan but I didn’t realise anyone was in front of me.

“I backed myself and went for the drop goal and it obviously got charged down, which sucked.

“I’ve definitely learned from it. If I’m being completely honest, it took me a solid three to three to four days to get over, because I know it was such a big part of the game.

“I really felt like I let my teammates down, which is not what you want to do. I obviously move on from that.

“The biggest thing I’ve learned in rugby is that you have to have a short term memory when stuff like that happens. I’m here now and that’s all that matters.”

His teammates and coaching staff – they’ve all made mistakes too – closed in with support. Over the course of the season he has been exchanging texts with next year’s coach Stephen Larkham – potter of the most famous drop goal in Australian rugby history.

Rather than being a moment of weakness, White considers the missed drop goal a demonstration of Lolesio’s strength.

“It’s important that a guy like Noah, he’s had plenty of these moments now and he continually wants the ball. We spoke about it straight away after the game and it was about ‘mate, it’s awesome that you want it.”

Failure happens to every athlete, the response is what matters.

“Go to the Last Dance,” said White of the Chicago Bulls documentary. “Michael Jordan missed plenty of game winners, but he continued to put his hand up. You’ve got to have short-term memory.

“If it comes down to it in the first game [against England], I’m sure Noah will be sitting there in the pocket screaming for it. And we’ll give it to him at the right time, this time, make sure we’ve got a wall in front of him.

“We learn but the most important thing is that Noah wanted it and he’s got to continue to want it and that’s what I love about playing with him – he always wants the ball, wants the big moments.”

Lolesio and White were talking to reporters from the Wallabies’ camp on the Sunshine Coast, where the youngster is getting more lessons from Cooper.

“Quade’s been awesome to me, ever since last year when he came into the squad,” Lolesio said.

“He’s probably mastered the craft of being a fly half. And we’ve been feeding off each other a lot ever since the camp started last week.

“We’re talking about variations of our attack, especially being a fly half too because of the spotlight of decision making and just choosing the right decisions in various situations. He’s been telling me how to handle stuff on and off the field.

“I think it’s a healthy relationship. I think you can only get the best out of each other if you’re competing. and off the field we’re just mucking around and having a laugh. When it’s time to flip the switch, we do that and we feed off each other really well. I feel like it’s an awesome relationship.

“I grew up watching him play and now I’m in the same spot as him.” 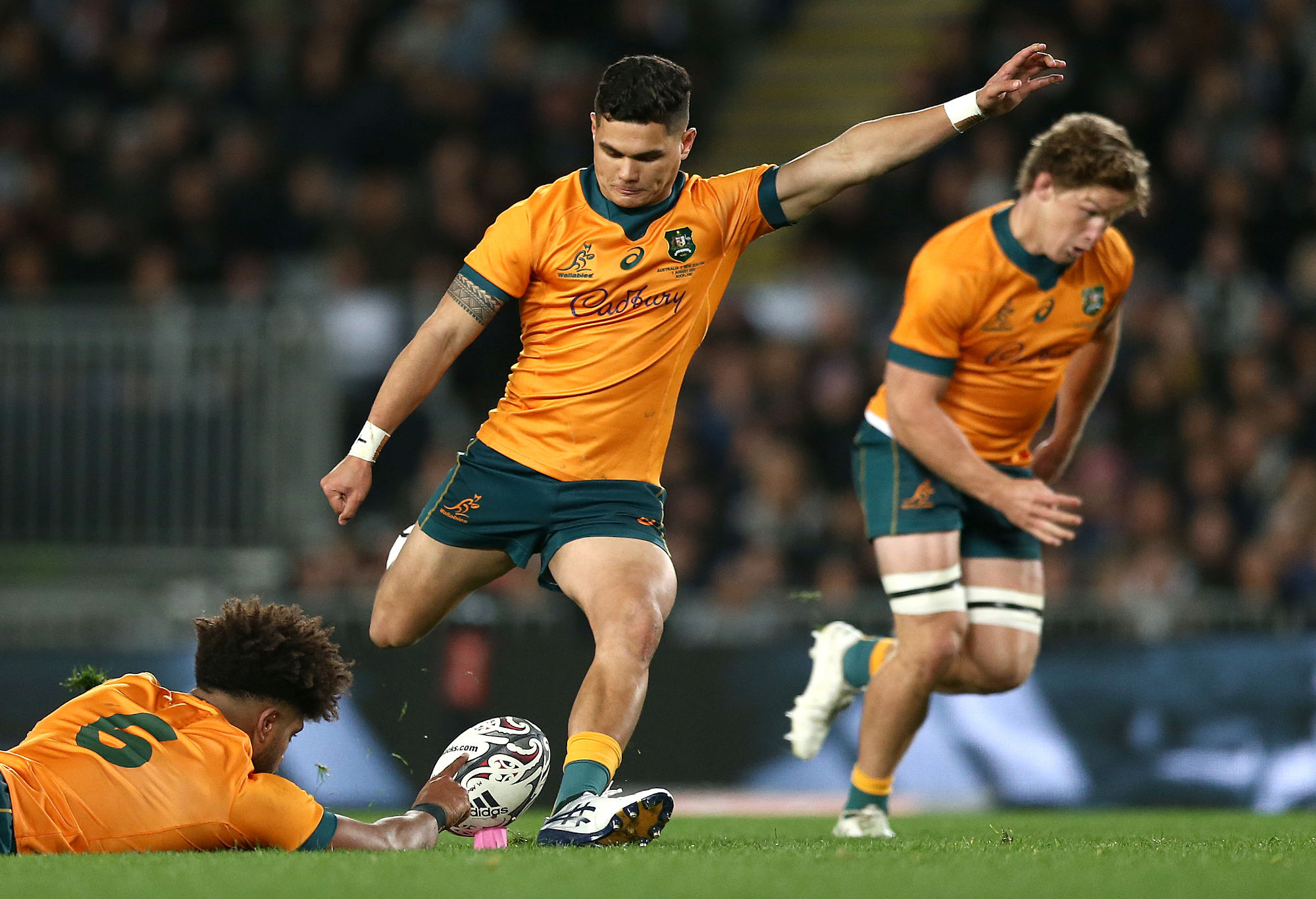 Lolesio accepts that they are competitors for playing time, and with James O’Connor in the squad, Lolesio is no guarantee of making the 23 for Perth on July 2.

He was initially left off the Spring Tour last year, only restored late in the piece and featuring for seven minutes against England at Twickenham.

“It’s been a bit of a bumpy road at the end of last year, but I feel like now looking back on that I’ve matured a lot as a player with the help of this man right next to me,” he says, pointing at White.

“It’s definitely an up and down season for myself as well obviously a lot of things have happened but I’m very grateful that I’m here right now and putting my best foot forward to be selected in the game day 23.

“I never want to have that mentality of walking into a squad that I’m just an extra number to hold a pad. I’m here to compete. We’re all here to put our best foot forward for competing which creates an awesome standard of training, and we’ll put that onto the field too.

“Quade and Rabs are both awesome players. And we all have different strengths and weaknesses. I’m just putting my head down and doing the work and doing the best I can here.”

For now, he has time on his side.