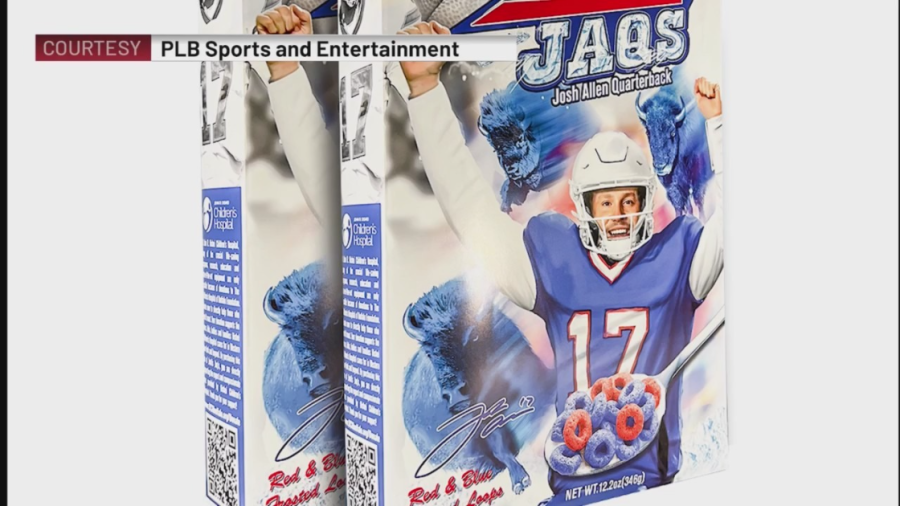 BUFFALO, N.Y. (WIVB) — The third edition of Josh’s Jaqs is now on store shelves at Tops and Wegmans locations, and the red and blue loops are another hit.

“The center of my universe is in Buffalo, New York,” Ty Ballou said, the owner of PLB Sports and Entertainment. “And I can’t be more sincere in saying that.”

Ty Ballou’s company works with athletes and other celebrities to create cereal, condiments and lots of other merchandise, including Josh Allen and Josh’s Jaqs. He said in the first ten days on stores shelves at Wegmans this year, 25,000 boxes of cereal were sold. A typical line of cereal sells 30,000 – 50,000 boxes in a whole year.

“We’re the number one selling cereal in Buffalo and Upstate NY,” he said.

Ballou has been doing this since 1996, but Josh’s Jaqs was his first cereal that matched the colors of the team the athlete represents. That was the request of Josh Allen. Allen also chose what he wanted on the box.

“He gets to pick the pictures, the charity, everything on the back panel, which I think he likes too,” he said. “I mean who doesn’t want to create his own cereal box?”

Twenty-four years ago, the Pittsburgh-based company partnered with another Buffalo Bill: Doug Flutie. Ballou helped create Flutie Flakes, and gave proceeds from the sale of the cereal to Autism causes. He’s in the middle of Steelers country, but has fallen in love with Buffalo and the giving mentality in The Queen City. Ever since working with Flutie, he said almost all the products he helps create give back.

So how much has the red and blue cereal raised for the cause near and dear to Allen’s heart? According to Oishei Children’s Hospital, that total is more than $50,000.

“He knows every box is helping children, which is awesome,” Ballou said. “He’s just a great guy.”

And that money goes to the hospital whether you eat the cereal or not. Ballou said his company estimates 40-50% of boxes aren’t even opened.

“It’s not like a good wine, it does not get better, it only gets worse.”

He said the shelf-life of cereal is only one year, so seriously… open the box. And you can do it carefully.

“You take your hairdryer to the top of the box,” he said. “It’s glued… and you take the cereal out and then glue it back, because the value is not the cereal, it’s the cardboard.”

And this won’t be Josh Allen’s only keepsake item at the grocery store. Ballou says, stay tuned for another item from the star QB, coming soon.

6 main reasons people travel for business in a digital world

An Ethereum Core Dev Saved Avalanche From $24B Network “Insta-Death”