Arteta criticised his team and the match officials, particularly over a disallowed early goal to Gabriel Martinelli, which raised the ire of the Manchester United legend.

Arsenal’s 100% start to the season came crashing to an end and Arteta said “the referee said it was a really soft decision. We just ask for consistency, today we disallowed the goal again, there is nothing we can unfortunately do now.”

“I’m fed up with all their excuses,” Keane said on Sky Sports. “He’s a sore loser like us all. But he’s got to give a little bit of credit to Manchester United and he never does. Let’s not make excuses. He lost the game 3-1. You can take the plaudits but give me the points any day of the week.”

Not so long ago, there was a crisis at Manchester United but after four straight wins, it seems like a dim and distant memory.

There were still anti-Glazer chants inside and outside Old Trafford – it feels like they are here to stay, whether the team win or lose – but they are now accompanied by frequent and jubilant roars for goals.

Two of them were scored in the second half by Marcus Rashford to sweep United to victory after Arsenal pulled it back to 1-1 through Bukayo Saka – but it was the opening goal which felt the most significant.

Antony, United’s latest big signing from Ajax for $A139 million, marked his first match in English soccer with a goal from a curling, first-time finish in the 35th minute, crowning a performance that featured a slew of jinks, feints and exaggerated stepovers that thrilled home fans.

He came off in the 58th minute to a standing ovation to be replaced by Cristiano Ronaldo, who again had to settle for a starting spot on the bench.

“He did well, but I think he can step it up,” said United manager Erik ten Hag, who was with Antony at Ajax last season. “This is a different league but there’s potential there.”

Since that humiliating 4-0 loss at Brentford which sparked a crisis and some doubts around the wisdom of hiring ten Hag as manager, United have beaten Liverpool, Southampton, Leicester and now Arsenal, the league leaders.

After six games, United are now only three points behind Arsenal and two behind champions Manchester City, the title favourites.

The confidence is back and a style of play has formed. “The spirit from this team, they can deal with setbacks like we did,” ten Hag said. “It is really great and shows your mentality. We have really improved on that.”

Arsenal also played well enough to show they could be in it for the long haul this season.

“We had some big periods where we were totally dominant and in total control,” Arteta said. “We created chance after chance but did not close the game.”

After the day’s other contest, there’s a strong chance that Brendan Rodgers won’t be Leicester manager by the time the Foxes play their next game. 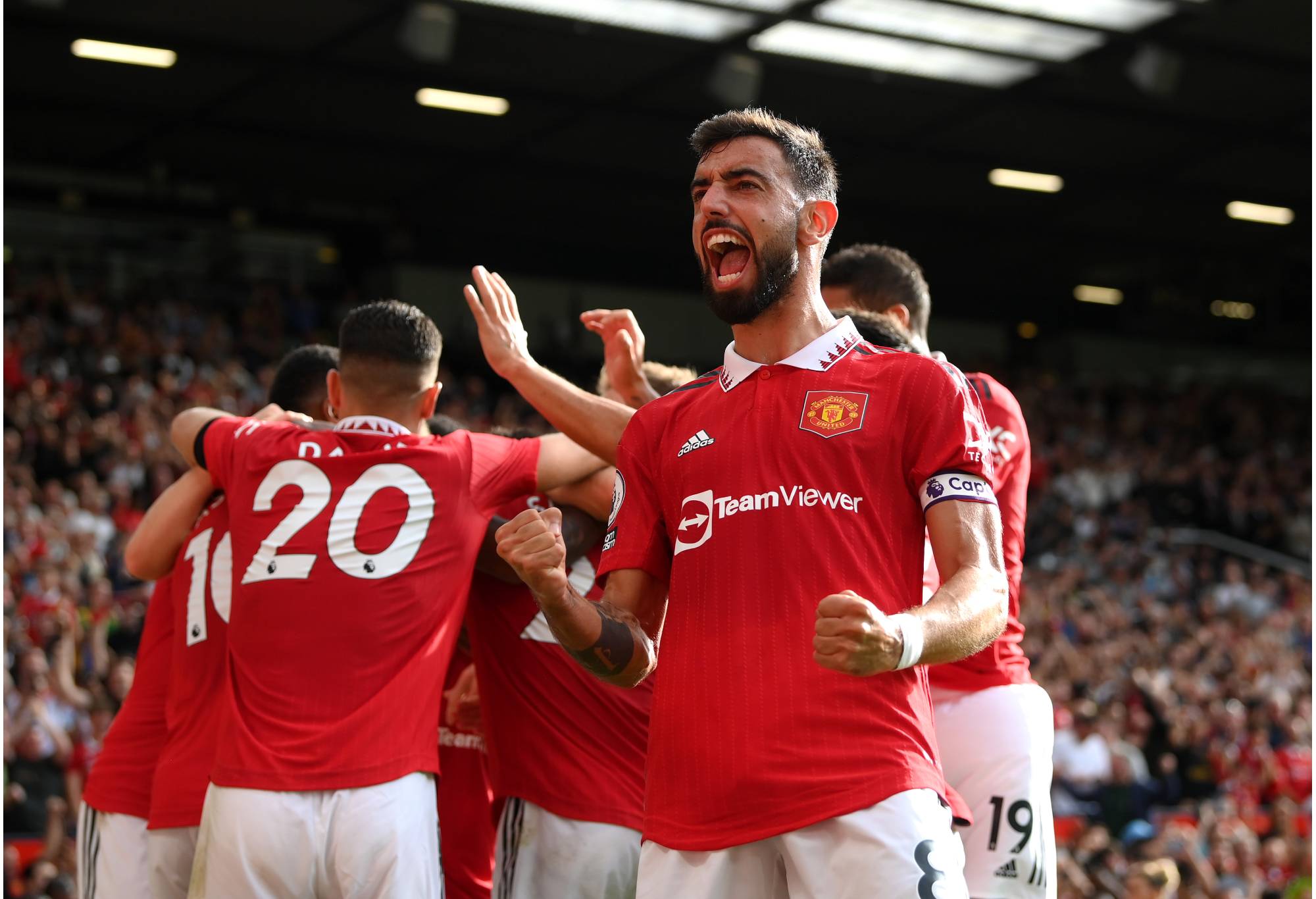 Leicester were embarrassed in a 5-2 loss at Brighton, leaving Leicester last on just one point from six games, while the Seagulls are now fourth, just two points adrift of Arsenal.

It wasn’t just the defeat but the manner of the performance that will worry Rodgers, and, more importantly, Leicester’s owners.

The defending was extremely soft as goals by Moises Caicedo, Leandro Trossard and Alexis Mac Allister — via a penalty and a direct free kick — along with an own-goal by Luke Thomas saw Brighton cruise to a victory that could have been even heavier.

That’s 16 goals conceded by Leicester already and it seems neglectful for the club to have only signed one outfield player and a third-choice goalkeeper in the summer transfer market, given the state of the squad.

Rodgers even called out Leicester’s owners in midweek, saying he had “not had the help in the (transfer) market this team needed.”

Scott Parker made a similar remark after Bournemouth’s recent 9-0 loss at Liverpool – and was fired a few days later.

Aussie official got it wrong on Hammers VAR call

The Professional Game Match Officials’ Board took the rare step of “acknowledging” specific controversies at matches at both Chelsea and Newcastle on Saturday, and accepted the Premier League’s request for an additional investigation.

VAR decisions in all affected matches are already reviewed by a five-strong independent panel comprising representatives of the Premier League and the PGMOL as well as three former players, with their findings sent to the clubs concerned.

So it is significant that PGMOL has taken the extra step after Saturday’s action, with West Ham denied a late equaliser in the 2-1 loss to Chelsea at Stamford Bridge, while the Magpies drew 0-0 with Crystal Palace after a Tyrick Mitchell own goal was ruled out at St James’ Park.

PGMOL said in a statement: “PGMOL acknowledge the incidents to disallow the goals in the Chelsea v West Ham and Newcastle v Crystal Palace fixtures.

“We will fully co-operate and collaborate with the Premier League and their request to review these two particular incidents, using the outcome as part of the ongoing assessment of weekly performances and the development of our match officials going forward.”

Both decisions were heavily criticised.

Hammers’ boss David Moyes branded Gillett, the only Australian official in the Premier League, unfit for duty following his decision to ask referee Andy Madley to take a look at the incident on a monitor.

Maxwel Cornet’s strike was chalked off by Madley only after Gillett’s VAR review in the London derby, with Jarrod Bowen deemed to have fouled Edouard Mendy as he attempted to reach a ball which was spilled by the goalkeeper.

A furious Moyes said after the match: “I’m amazed that VAR sent the referee for him to see it. But I thought even if he goes to the TV there’s no way he’s overturning this, because this is a goal. It was a ridiculously bad decision.

“I’d question VAR today as much as the referee. But the referee should have stuck to his own guns. The sad thing is this is the level of the weak refereeing at the moment.

“But if you’re saying today that the referee’s mistake was corrected by VAR, I’m saying I do not see that in a million years.

“And I’m actually more embarrassed for the guy who did the VAR than I am even for the referee.

“Because that’s telling me it’s someone who doesn’t understand football and probably shouldn’t be near it, if they think that was enough to send the referee to the screen.”