Leigh Matthews believes the fabric of the game is being attacked and was left feeling “sick” and “disturbed” and found it hard to sleep after the controversial Jack Ginnivan incident on the weekend.

The AFL legend on 3AW on Tuesday night blasted the rulemakers over the decision to call play on after the Collingwood star was hit high in a tackle from Essendon’s Mason Redman early in the Magpies’ nail-biting win.

Matthews was still fuming on Tuesday night, blaming Richard Goyder and the AFL Commission, and CEO Gillon McLachlan for making the rules too hard for the player in possession.

He said Ginnivan has been victimised and Matthews added he’s been feeling everthing “from disillusioned to disappointed to angry to shocked. It got my blood boiling and frankly two days later it [still] does”.

“I felt sick because of the fabric of the game. One the fabric of the game is umpires treating every player the same … that was virtually not only a high contact headlock, it was bordering on unduly rough play from Mason Redman – and the best umpire in the game, Matt Stevic, didn’t blow the whistle. Now I didn’t blame Stevic, I thought to myself: ‘What are they doing to our game?’

“It’s only one free kick but it’s a symbolic free kick that’s showing this is where the game is,” Matthews said on 3AW. 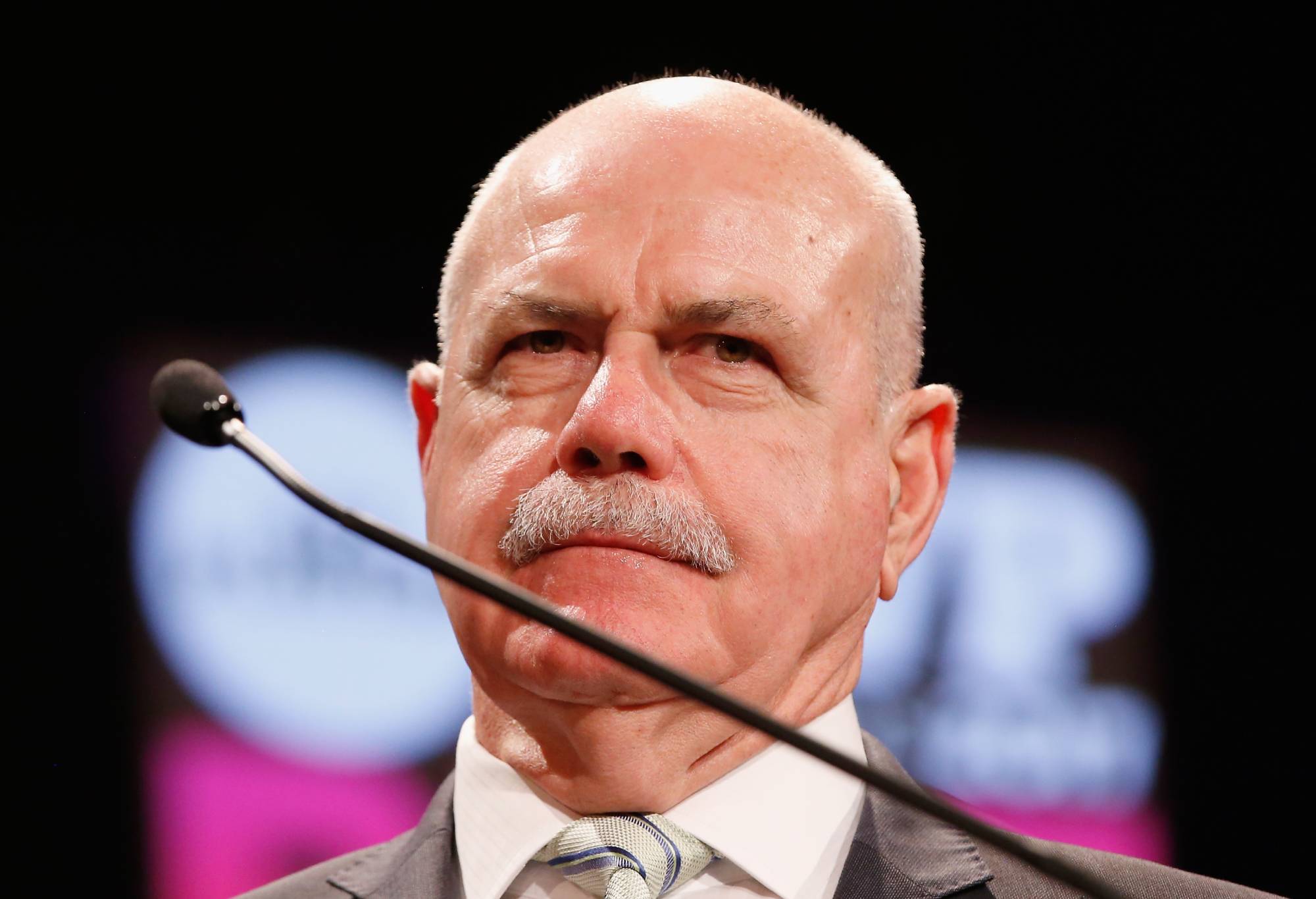 “The fabric of the game’s being attacked, in my view, so I am disturbed. I’ve calmed down a little bit – I couldn’t sleep Sunday night thinking about it. It’s the symbolism of it that just disturbs me.”

While the AFL says the umpire initially made the right call, they should have penalised Redman after he continued to hold Ginnivan around the neck.

“Ginnivan is responsible for the initial high contact however (Mason) Redman then continues with the tackle in an unreasonable manner, holding Ginnivan around the neck,” an AFL statement read.

“In this instance a free kick should have been awarded to Ginnivan.

“Overall the umpires did a terrific job of officiating the high tackle interpretation in all games over the weekend.” 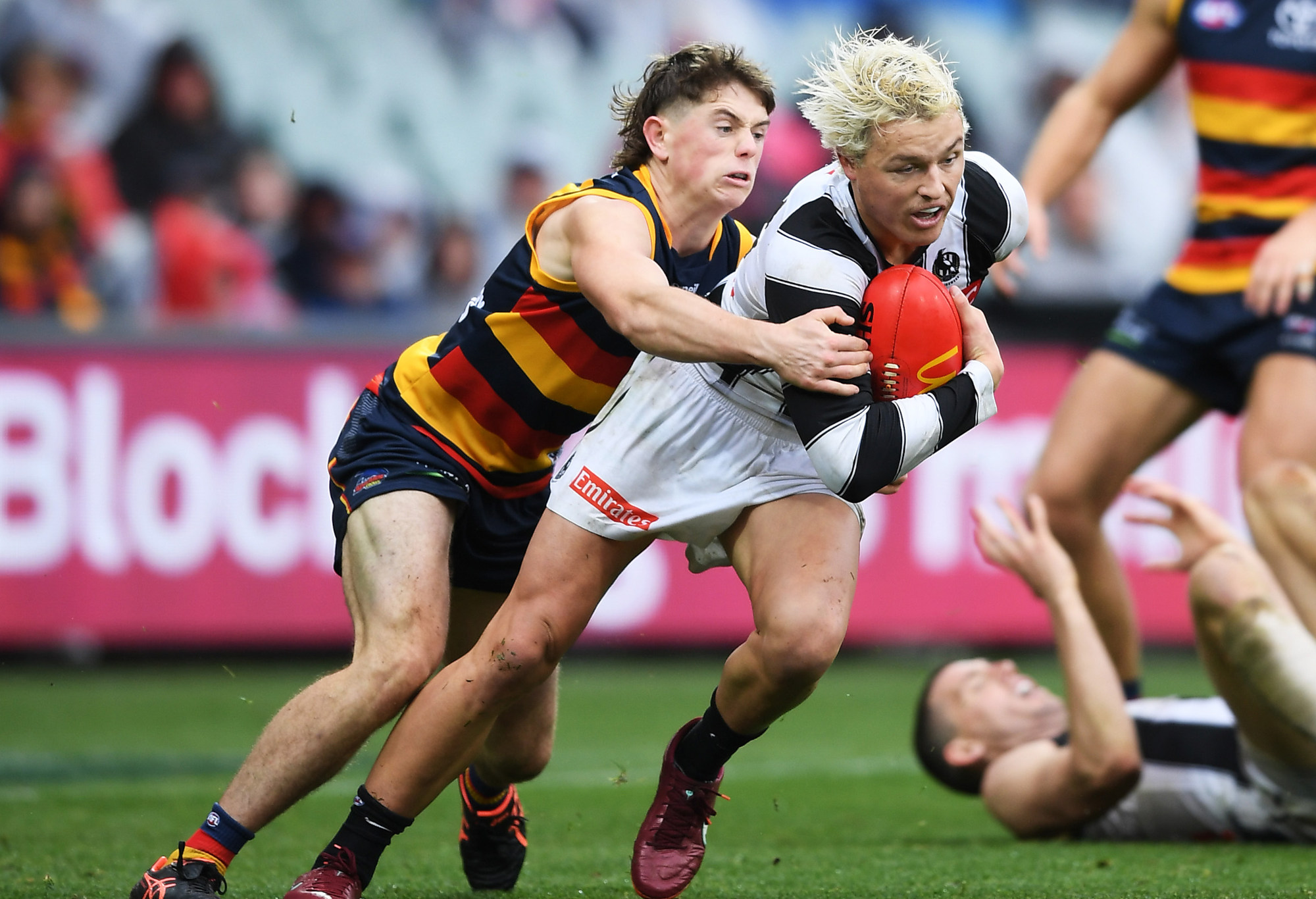 Hinkley is contracted for next year, but some fans are calling for his dismissal following the club’s struggles this season.

11th-placed Port Adelaide (8-10) need to win their remaining four games plus rely on other results to fall their way in order to snare a finals berth.

The Power were rated a legitimate premiership threat heading into this season, but last year’s preliminary finalists blew their chance with a 0-5 start to the campaign.

Wines will notch his 200-game milestone in Saturday’s must-win clash with Collingwood at the MCG.

The 27-year-old has spent his entire AFL career under Hinkley, and he wants the 55-year-old to continue on.

“In terms of the playing group, we’ve got full faith in Ken, all the coaches and everyone at the club,” Wines told reporters on Tuesday. 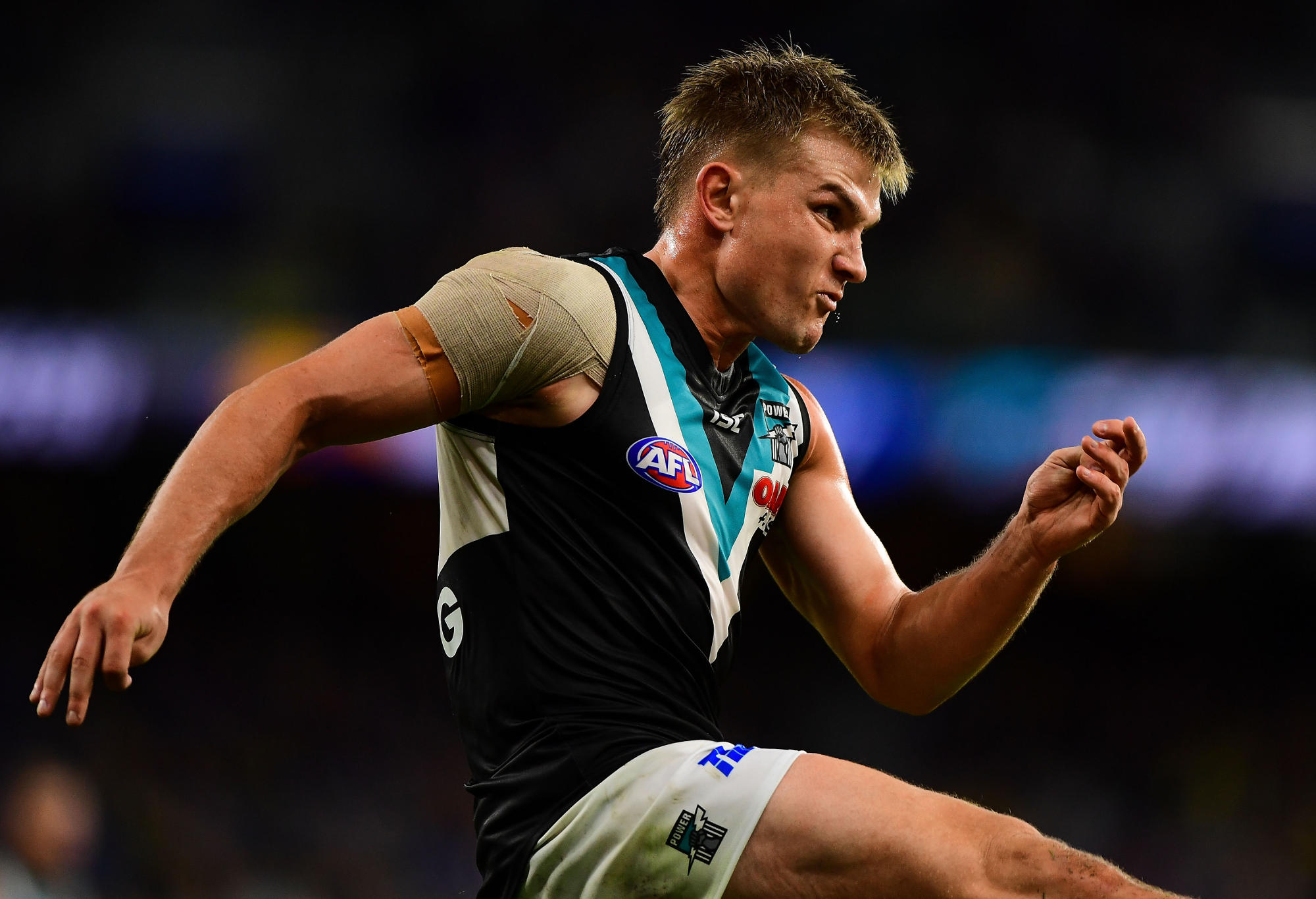 “The belief in our group has never faltered throughout the year, despite when we were 0-5.

“At this stage it hasn’t panned out fully to what we expected but our belief in Ken and everyone at the footy club is still there.”

A large sheet with the words “Sack Hinkley” was plastered over the Power’s roadside sign on Port Road near Alberton on Monday.

Wines said he understood the emotion of supporters and their want to express their opinion.

Although Port’s flag hopes for this year appear shot, Wines is desperate to taste premiership success before his career finishes – but not for selfish reasons.

“It is for Robbie Gray, Tom Jonas, Travis Boak … the guys who have been at this club for so many years and have stuck by Port Adelaide and stuck true,” Wines told the Power website.

“I want to get one for them. I want to see those guys be able to stand up to receive a premiership medal.

“They have set the standard. They have got this club going in the right direction. That is what they deserve.”

Wines said he was proud to share his milestone day with Jonas, who will also notch game No.200.

The Power will be without Dan Houston (concussion) against the Magpies, but Lachie Jones is a chance to return from a hamstring injury. 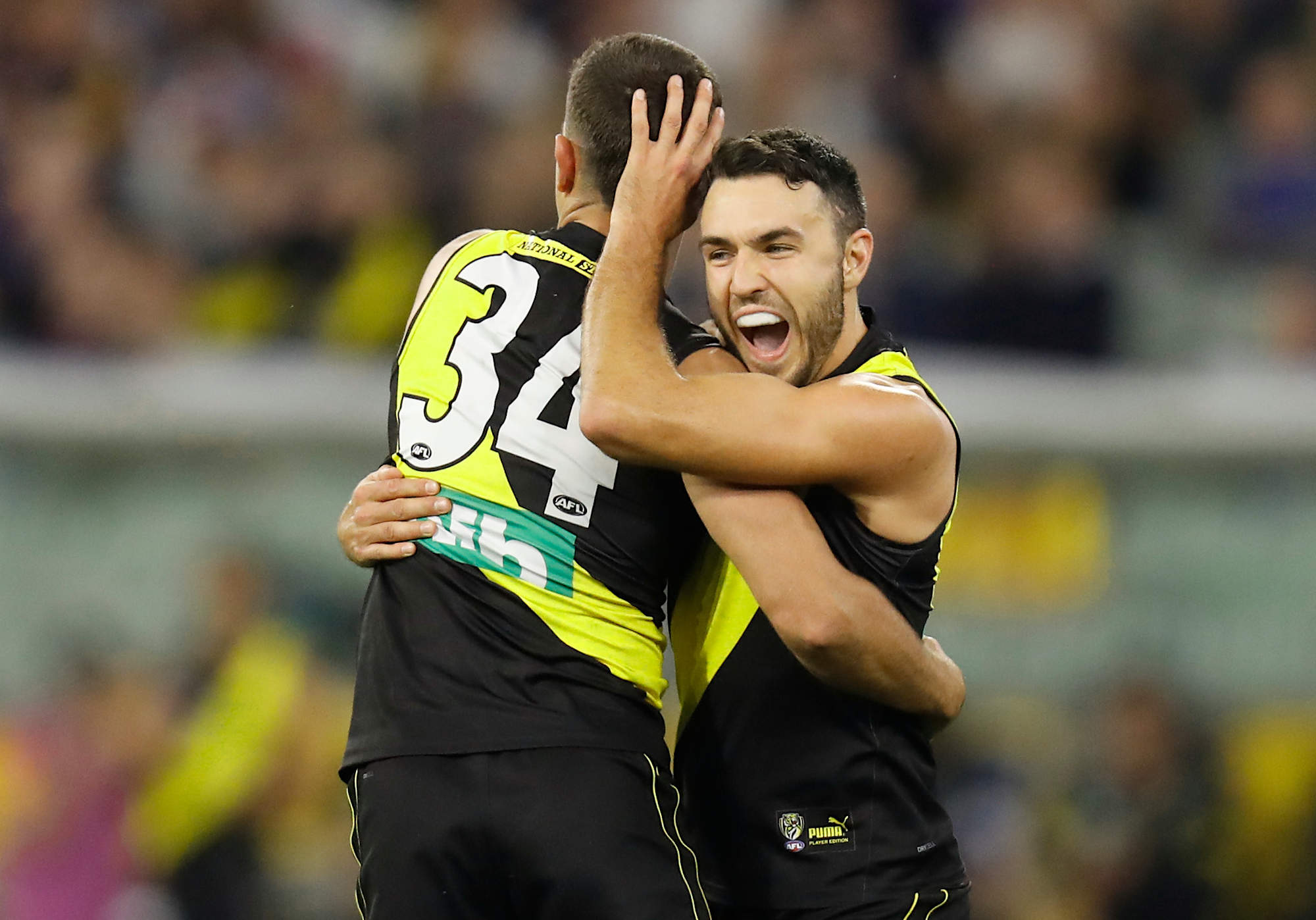 The versatile Edwards will become just the fifth player in the Tigers’ proud history to reach 300 VFL/AFL games.

The 33-year-old will sit alongside Kevin Bartlett (403), teammate Jack Riewoldt (321*), Jack Dyer (311) and Francis Bourke (300) when he runs out in Richmond’s crunch clash with the Brisbane Lions on Sunday.

“It doesn’t sound right or sit well with me at the moment,” Edwards told reporters on Tuesday.

“They’re legends of the game and people I’ve looked up to for so long.”

Edwards is a lauded triple premiership star now, but he had to endure some difficult early years after arriving at Punt Rd from North Adelaide in the 2006 draft.

He didn’t play finals until his seventh season, then experienced three-straight heartbreaking losses in elimination finals.

“I always look back on the tough times to make me appreciate the last five years and how hard it is to get there,” Edwards said.

“It’s really been an incredible climb from where we came from when I got here.

“The club’s in a different position, everything looks different, it’s pretty mind-blowing how things can change over time.

“From some of those dark times, we got some of our best players like (Trent Cotchin and Dustin Martin), so you can’t look back too badly on those times.”

After being picked up in last year’s mid-season draft, Parker played 11 games with the Tigers in his second chance at AFL level.

Parker returned to WA after his axing from the Saints and again caught the eye of AFL clubs with standout performances for South Fremantle.

“I have made some lifelong friends at Richmond and have made many great memories during my time in the yellow and black,” he said.

“Now is a time that I must put my family first and return home to Perth with my partner and three children.”

Parker’s announcement continues a big week for the Tigers after triple premiership hero Kane Lambert on Monday called time on his career due to a debilitating hip injury.

Hybrids: Why Are They So Fast?