As is often the case, the NRL’s tendency to be reactionary rather than proactive is causing all sorts of judiciary drama that could have been avoided.

In an age when professional sports live in fear of litigation if they are seen to be too relaxed around head contact, the perception is that the NRL has become more lenient towards rough play.

The judiciary system which was rushed through hours before the start of the NRL season has been a mess all year and the snowball effect is turning into an avalanche a week out from the finals.

High contact, cheap shots, head slams, hip-drops and all manner of roughhouse play seem to be getting more prevalent.

Dinosaurs will tell you that it’s because players can no longer do the “manly” thing and punch an opponent these days because of the automatic sin bin edict. That is nonsense.

There were very few actual brawls in the modern era before the automatic sin bin rule came in back in 2013 after the infamous Origin incident when Paul Gallen threw a flurry of punches at Nate Myles.

Rugby league has always been a game that has turned a blind eye to “a bit of niggle” in the ruck with the view that as long as the match officials don’t see it, then you try to get away with it. 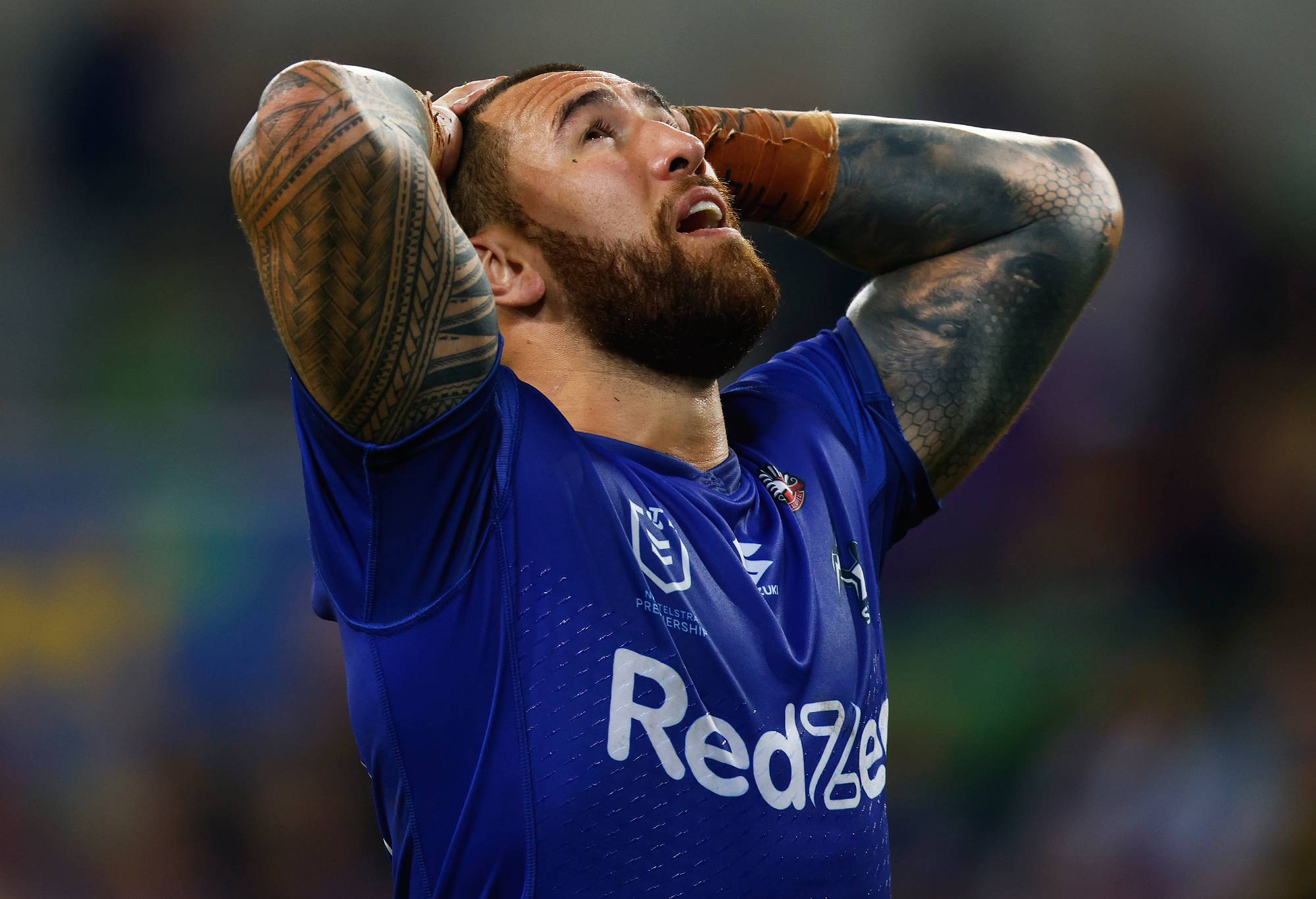 Coaches have always instructed players to push the envelope and it’s up to the referees and the judiciary system to enforce their duty of care to the participants.

The previous points-based system became too complicated and it meant that suspensions were being dished out for minor incidents when a fine should have sufficed.

It should have been simplified but the NRL’s new system has veered way too far to the other end of the spectrum so that you get ridiculous situations like Nelson Asofa-Solomona escaping suspension yet again despite copping his fifth charge of the season on the weekend.

After clearing him of a similar incident last month when he knocked Warriors hooker Wayde Egan’s teeth out with his reckless stiff arm, you can see why he thought he could try this kind of thuggery again when Roosters winger Joseph Suaalii was tackled to the ground, lying pretty much defenceless.

NRL head of football Graham Annesley, when asked specifically about Asofa-Solomona, at his Monday afternoon media briefing said he accepted the match review committee’s grading of the latest incident and claimed the Storm prop was running a risk with his actions.

Cynics would argue that he’s lost comparatively little for the gambles he’s taken with his cheap shots this season.

“Some players do play on the edge much more than others,” he said, choosing his words carefully. “Nelson’s not the only one in the competition – whether it’s high tackling or just the level of aggression that they play with – there are players who go closer to those limits than others.

“And that’s fine as long as they don’t cross that line.

“In relation to players who are constantly getting low-level charges, those charges do increase, those outcomes do increase but importantly there’s another factor in the judiciary code that can deal with those incidents as well and that is where the match review committee feels that there is a need for a personal deterrent.”

He went on to explain that this “personal deterrent” was to charge a repeat offender with a grade-two offence for a grade-one incident when “the message isn’t getting through”.

After five charges, it’s safe to say Asofa-Solomona hasn’t received that message … mainly because the match reviewers have not sent it to him in any way shape or form. And until he gets a harsher sanction, he will continue on his not so merry way.

The NRL should be applauded for the improvements it has made to preventing concussion with head injury assessments but it should be derided in equal measure for the match review process which allows this kind of thuggery to go virtually unpunished. 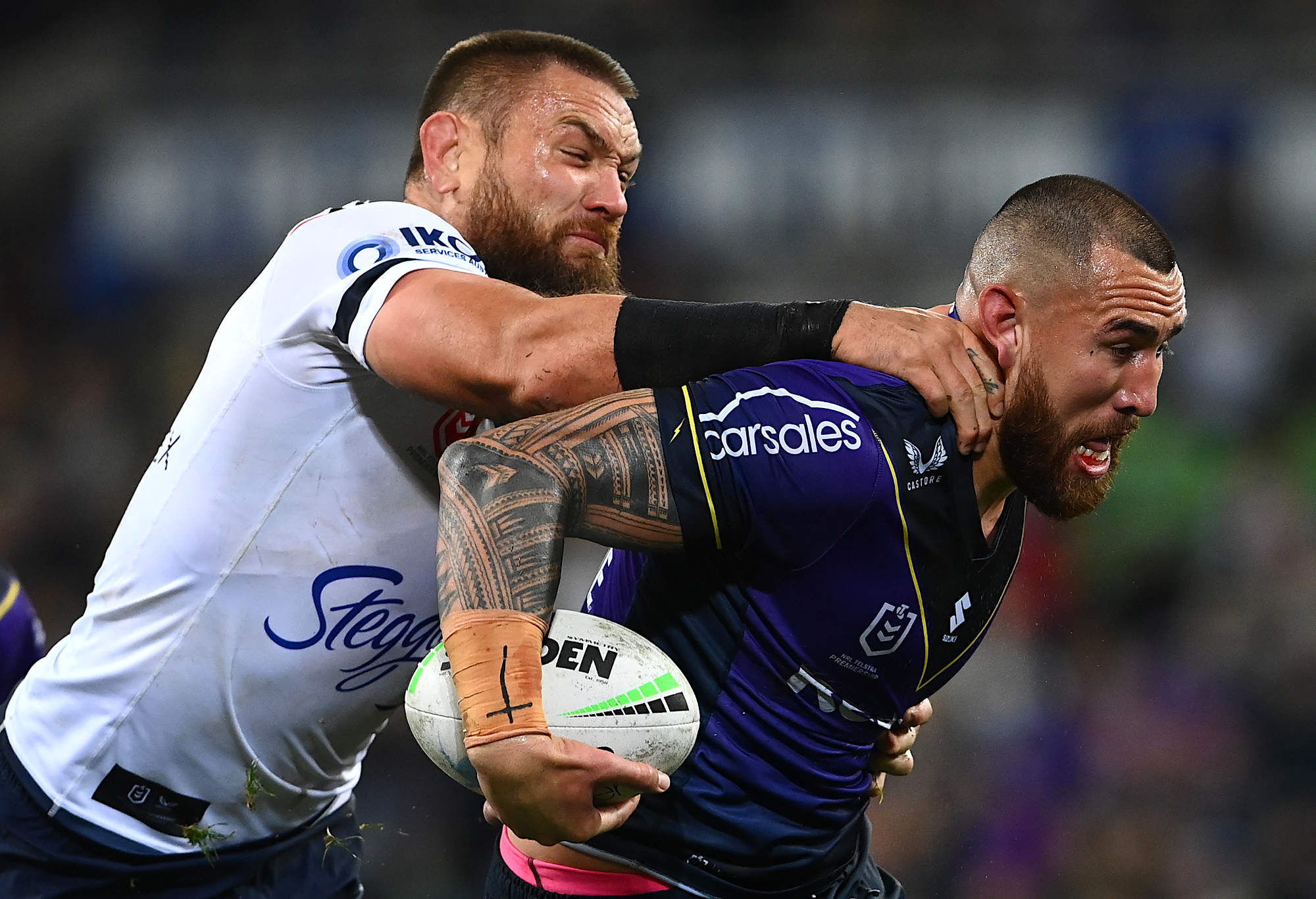 Suspensions and send-offs are the only way of getting the point through because it penalises the entire club and sends a message to coaches that if you break the rules, the team will be missing players.

But now if you do a careless high tackle, make dangerous contact or display contrary conduct, you can escape with a fine whether it’s your first, second or third offence.

In fact, the only category among the eight which warrants a suspension if you’re found guilty of a grade-one offence is a reckless high tackle.

So you can also be found guilty of a spear tackle, striking, a crusher tackle or a shoulder charge and as long as it’s rated a grade one, the only punishment will be to your hip pocket.

You don’t have to be a spinal expert to understand a spear tackle, or the euphemistic term “dangerous throw”, along with the hideous crusher tackle can have serious repercussions.

Likewise, striking – as in punching an opponent, usually in the head – and the shoulder charge, can have the most serious of outcomes. A player died in a QRL match in 2015 after he was on the receiving end of a shoulder charge. It’s a dangerous sport which can have catastrophic consequences.

Players are aware of the risks involved when they step onto the field but you only have to look at how improvements can make a massive difference in a sport like Formula One, which had a terrible record of tragedy with 28 deaths in races over four decades prior to Ayrton Senna’s fatal crash in 1994.

After a range of improved safety measures since that infamous day at the San Marino Grand Prix there has only been one death – Frenchman Jules Bianchi in 2014.

With the threat of class action lawsuits and the ongoing debates and mounting scientific evidence around the dire consequences of repeated head injuries in contact sport, how can the NRL’s judiciary system be justified?

Previously, charges were rated on a grading of 1-5. Now there are only three options.

So before a grade-one charge was considered within the first 20 percentiles of severity, grade two in the 20-40 range and so on.

Now because there are only three gradings, for an incident to be rated grade two to warrant a suspension, it has to be in the middle third of the scale, which also suits the players because the match review committee seems reluctant to dish out higher-graded charges.

And just in case you were unaware, it’s going to be even worse in the finals with the Origin system of fines replacing suspensions in place for pretty much everything. As long as the NRL’s thugs tread that fine line between being sin-binned or sent off and getting away with grubby on-field acts, they won’t be suspended during the playoffs.

Annesley said the previous system that was scrapped in the off-season was too complex and too often players were missing games for “what were effectively low-level charges which did not require suspensions”. 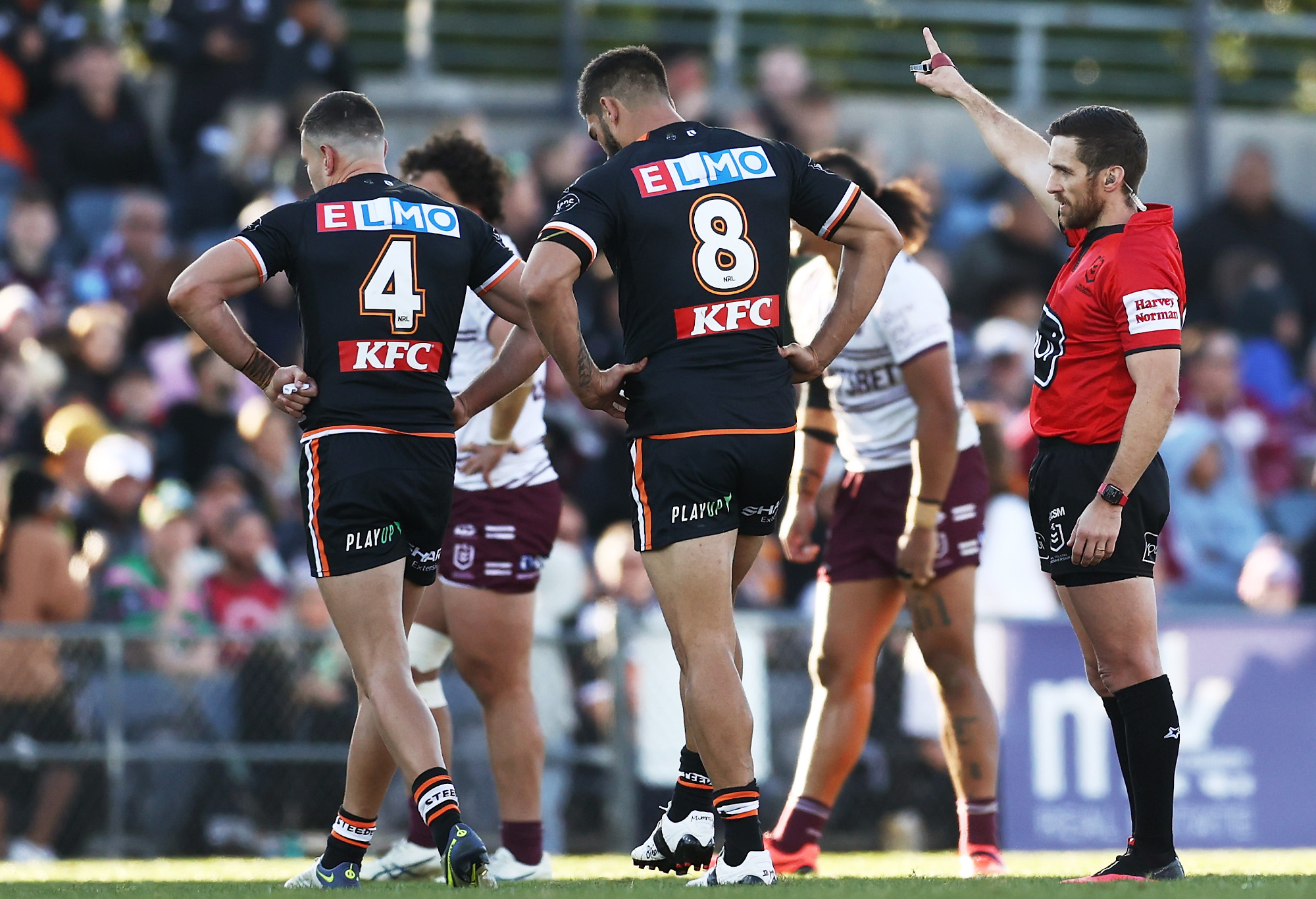 Brent Naden of the Tigers is sent off by referee Peter Gough. (Photo by Matt King/Getty Images)

“The multiplier effect and the addition of carryover points was pushing players into suspensions that people were saying ‘how can you get two weeks for that?’ These things are very much a delicate balance.

“We have a system in place that is intended to protect players firstly and make sure players aren’t subjected to dangerous foul play during the course of matches.

“It’s a tough game and most of the instances that take place in our game are not deliberate.

“With 12-16 cameras around a game at every single game, you kind of have to be crazy to do something intentionally, unless you’ve completely lost the plot and we don’t have too many instances of that happening in games.”

Sounds like the kind of madness Asofa-Solomona is getting away with.

Amazing in Adelaide, now Wallabies must be spectacular in Sydney