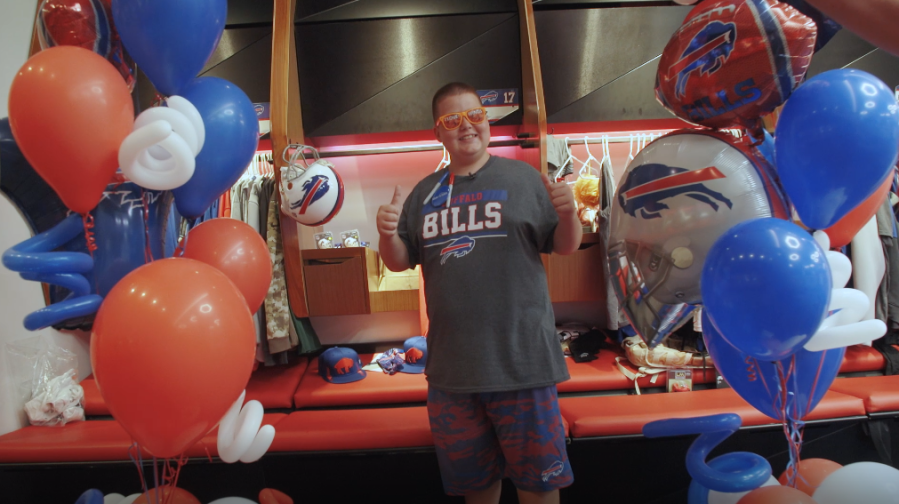 ORCHARD PARK, N.Y. (WIVB) — Fans were fired up for Friday’s Red and Blue practice at Highmark Stadium. The Bills say it was the biggest crowd for a practice session in team history, but one fan in particular was beyond excited and stood out from the crowd of more than 35,000 in the stands.

12-year-old Mason Schrantz was diagnosed with Non-Hodgkin Lymphoma on December 17, 2017. After undergoing two years of chemotherapy, he went into remission in 2019 and finished his treatments in 2020. Through that difficult time, it was his love and passion for the Buffalo Bills that got him and his family to the finish line.

“The Bills are my favorite team!,” Mason said on the sidelines watching Bills practice.

For his family, they remember watching Josh Allen and the Bills in the 2017 season from Oishei Children’s Hospital.

The Dunkirk native was right in the middle of the fandemonium for Friday’s practice, as the Make-A-Wish Foundation made his dream come true. He signed his very own Buffalo Bills contract with general manager Brandon Beane, joined the team meetings and even broke down the huddle when practice ended. During practice, there were many fist bumps and high-fives to be had from players like Josh Allen, Stefon Diggs and Dion Dawkins.

“I was speechless. I couldn’t say anything when I went into the meeting with them,” Mason added. “I got to high-five Josh Allen. Catch a couple from him when he went around. I met the whole Bills team.”

Just like the rest of Bills Mafia, the Schrantz family’s goal is to see the Lombardi Trophy at One Bills Drive and to help other families going through tough times.

“As a family, we want the Bills to win the Super Bowl and all of the sick kids to be well,” Dominick concluded.

Mason’s eyes remained locked on the field for much of the practice, especially on his favorite player Josh Allen, who he hopes leads the Bills to victory this season.

“I hope we make it to the Super Bowl and it. I hope Josh gets MVP,” Mason said. “Go Bills!”

It was quite a day for the entire Schrantz family who say they are so grateful to the Make-A-Wish Foundation, the Buffalo Bills and Josh Allen for advocating for their family and countless others.