Is it possible to be the coach of the year for a side that will likely finish in the bottom six?

If it is, then surely Sam Mitchell deserves consideration for the gong in 2022. No coach has done more with less than Mitchell at Hawthorn this season; for a side with Sam Frost as its de facto key forward, a second-year ruckman and probably the AFL’s least damaging midfield to become capable of challenging the best sides in the competition, most lately Fremantle, is an astounding accomplishment for a first-year coach.

The Hawks have now come within 15 points of both Melbourne and Fremantle, lost by a point to Carlton, and have knocked off Brisbane and Geelong. Clearly, now, their form at the end of last year, when they drew with the Dees and took down the Western Bulldogs and the Lions (again) was no fluke – and not Alastair Clarkson’s doing, either.

They might be 4-9, and have now lost seven of their past eight. All bar two – thumping losses to Gold Coast and St Kilda – could easily have been won, and probably will be won with a year’s worth of experience under the youngsters’ belts.

Mitchell’s masterclass wasn’t enough for victory against the Dockers on Saturday – he had the year’s de facto premier coach, Justin Longmuir, standing in his way. But they gave it one hell of a shake – and really, the one difference between the two was that only one had access to Andrew Brayshaw.

The key all afternoon for Hawthorn was pressure: easy to pull off in theory, but a stumbling block for developing sides everywhere. Without Mitch Lewis and Jack Gunston at his disposal, Mitchell’s Hawks knew the only way to pull off an almighty upset was to lock the ball in attacking 50, tackle like their lives depended on it, and feast on whatever crumbs came their way.

The Hawks laid six tackles in their forward 50 alone in the first term – their average for a whole match this year was 8.4. Then, when they either forced a turnover or won a free kick, they were deadly in front of the big sticks, kicking five goals straight to take a shock lead.

Daniel Howe threaded the needle from the boundary line, Chad Wingard bobbed up at the end of a great team play, Dylan Moore ran down Hayden Young with a chasedown tackle that was, dare I say it, Cyril Rioli-esque.

Less obvious but equally telling was the fact that the Dockers had more kicks than handballs for the term. Like most good teams this year, Freo have clearly been a kicking side: they’ve averaged 218 kicks and just 158 handballs this year. But with the Hawks putting the clamps on, those outlet kicks that enable the Dockers to set up their forward ball movement was stymied.

Frost clearly isn’t a forward, while Jacob Koschitzke and Jackson Callow remain works in progress as talls; but their main job for the day, to prevent the Dockers defenders plucking intercept marks at will, was hugely successful. They’d claim four marks inside 50 for the day, kicking just one goal, but considering what they were up against, you’d take that every day given the Hawks’ smalls in Luke Breust and Dylan Moore were the real danger.

The Dockers’ only saving grace was their dominance at the coalface: four of their first five goals for the day came from clearances. Once the Hawks got possession and drove the ball deep, they were in trouble, taking as few intercept marks for the day as in any match in 2022. But if they were able to dictate terms, the Hawks too struggled to hold them at bay.

This, again, is a testament to Mitchell’s impact on a limited playing group. When the Hawks are able to get numbers behind the ball, set up their structure, and squeeze the ball carrier, their backline is hard to get through: Freo took just six marks inside 50 for the match. But when exposed one-on-one by the 6-6-6 starting set-up, they’re vulnerable, especially when the ball hits the ground: and when the ball hit the ground, the Dockers had the likes of Michael Walters, Lachie Schultz and Travis Colyer to pounce.

It would be easy to credit Brayshaw for the Dockers’ midfield supremacy, but only two clearances and four contested possessions for the match makes it clear that, while he was influential in driving the ball into attack, he still needed to be fed. That’s where Caleb Serong comes in.

It’s hard to believe he’s only in his third year: the 21-year old feels like a seasoned pro already. He’s the perfect partnering for the gut-running Brayshaw: a tyro in close, one of the most ferocious tacklers in the game and quite possibly the fastest hands in the west. Both went top-ten in their respective drafts: it’s been a while since the Dockers have messed one of those up.

Sean Darcy, too, got better as the game wore on in the ruck, and his bullocking presence over the ball is exactly what his side needs. There was also the small matter of Nat Fyfe, straight into the midfield mix on return; even the two-time Brownlow Medallist at his rustiest still got the Dockers going from the stoppages regularly with his trademark power in close. 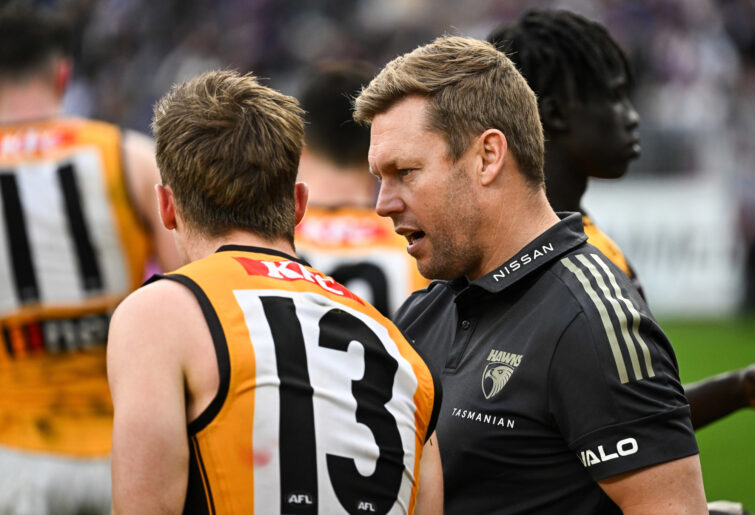 The trend continued in the second term: the Dockers kept kicking goals from centre bounces, the Hawks kept up their suffocating pressure in attack. By early in the third term, the Dockers had scored 39 of their 48 points directly from clearances, including a season-high four of their first 10 goals directly from centre bounces by midway through that quarter. Meanwhile, the Hawks scored five goals to half time from forward-half intercepts – more than Freo had conceded in any full match in the first 11 rounds.

The Hawks are still developing, and in 12 months’ time maybe they’ll be equipped to stop teams getting floods of goals on them. It cost them dearly against Sydney and Essendon, twice spurning leads at three-quarter time to lose by plenty; against the Dockers, it meant defeat despite winning three of four quarters.

The six goals Freo kicked in the game-winning third term came from just 12 inside 50s – it wasn’t as if they were dominating territory. But smarter, sharper ball movement across the ground enabled the Dockers to be far more incisive when going inside 50, and finally break the Hawks’ fearsome forward half pressure.

Central to both was Blake Acres, the wingman racking up 13 touches and a goal in probably his best term of an already outstanding season. His use of space on the outside, penetrating kicking and hard running have been a godsend for Freo, perfectly filling the midfield void left in recent years by the likes of Ed Langdon and Adam Cerra.

A hamstring injury in the final term was heartbreaking – and prompted some of the year’s most heartbreaking scenes on the Dockers bench. He’s going to be deceptively tough to replace, and you’d wager Longmuir must find a way for at least the next month.

Fyfe, too, showed more impact forward of centre after largely slotting back into his old midfield role for the first half. He offers a different dimension in attack – he’s brilliant overhead, reads the play well, and is a natural eye-catching target given, y’know, the dual Brownlow Medallist thing.

He’d kick a goal from the square to spark celebrations, but it was his strong mark on the lead a few moments before, from which he hit the post, that would have thrilled Longmuir even more.

Walters, too, finished with a season-high number of score involvements, roaming further up the ground than he has at times this year. The goalsneak is past his brilliant best, but his footy smarts and incisive kicking are both ideal attributes to have, and he stood up as required with Michael Frederick out through suspension.

The Hawks kept coming despite it all; it took some magic from Brayshaw at close range to finally close the door on them. With a lead at last, the Dockers defence was at its miserly best through the final quarter; almost taking it as a personal affront their leakiest first half of the season.

Hayden Young, Luke Ryan and Brennan Cox ruled the skies late when it counted, finally getting their intercept-mark tally to a reasonable tally after looking at a season low for much of the match. Then, not needing to bite off anything risky, they retained possession to a far greater degree than in the early stages.

The Dockers are good; Hawthorn are probably a few years off being the same. But when all is said and done, the vanquished Mitchell can leave Optus Stadium with his head held just as high as the victorious Longmuir.