Mother of Tops shooting survivor testifies in front of House: “This is who we are as a nation” 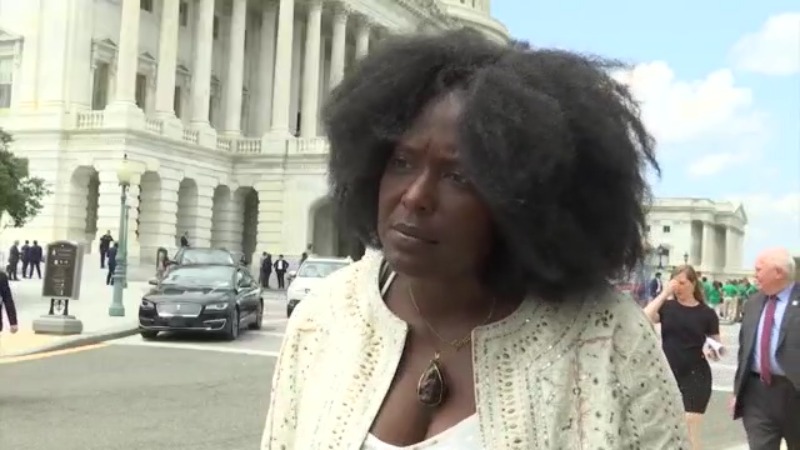 WASHINGTON, D.C. (WIVB) — The mother one of the surviving victims of the white supremacist shooting at Tops Markets on May 14 testified before the House of Representatives’ Committee on Oversight and Reform Wednesday, giving three reasons as to why domestic terrorism exists in the United States.

“As an elected official, it is your duty to draft legislation that protects Zaire and all of the children and citizens in this country,” she said. “Let me say to you here today, I do not feel protected.”

“Zaire — ‘The Kid’ — is now a 21-year-old man. He’s pure joy. He’s everything that is good in this world,” Everhart began. “I was going to tell you all a bunch of funny, fluffy stories about Zaire, but I have a message, so I’ll get to the point.”

“As Director of Diversity and Inclusion with New York State Senator Tim Kennedy’s office, stories of gun violence and racism are all too familiar. But now these stories are Zaire’s stories,” she said. “These are issues that, as a country, we do not like to openly discuss.”

“America is inherently violent — this is who we are as a nation. The very existence of this country was founded on violence, hate and racism, with the near annihilation of my Native brothers and sisters. My ancestors, brought to America through the slave trade, were the first currency to America,” she said. “My ancestors — the first currency of America — were stripped of their heritage and culture, separated from their families, bargained for on auction blocks, sold, beaten, raped and lynched. Yet I continuously hear after every mass shooting that this is not who we are as Americans and as a nation. Hear me clearly. This is exactly who we are.”

She asked that curriculum around the country adequately educate American children about other cultures, ethnicities and religions, saying reading about history is crucial to the future of the country.

She continued, reminding the committee everyone bleeds the same and said she hopes the attack will some day be a part of the curriculum.

“We cannot continue to whitewash education, leading generations of children to believe one race is better than another. Our differences should make us curious, not angry. At the end of the day, I bleed, you bleed, we are all human,” she said.

“The 18-year-old terrorist who stormed into my community, armed with an AR-15, killing 10 people and injuring three others, received a shotgun from his parents for his 16th birthday. For Zaire’s 16th birthday, I bought him a few video games, some headphones, a pizza and a cake,” she said. “Children should not be armed with weapons, parents who provide their children with guns should be held accountable, lawmakers who continuously allow these mass shootings to continue by not passing stricter gun laws should be voted out.”

She then addressed those lawmakers directly, telling them her son has a hole on the right side of his neck, two in his back and another in his left leg, then asked those lawmakers to picture their children were the ones in Zaire’s place.

“As I clean his wounds, I can feel pieces of that bullet in his back. Shrapnel will be left inside of his body for the rest of his life.”

She then invited anyone not moved to act on gun legislation to her home to help clean her son’s wounds.

Governor Kathy Hochul addressed Everhart’s testimony, among others, and called on lawmakers in Congress to pass nationwide gun safety laws.


‘Protect Our Kids’ gun legislation passes the House, will move to Senate

For two days our country has heard in painstaking detail from people impacted by gun violence. Many of those who testified are my neighbors in the City of Buffalo, people like Zeneta Everhart, the mother of a young man who miraculously survived the shooting, and Garnell Whitfield Jr., who tragically lost his mother to this senseless act of gun violence. Survivors, family members, law enforcement and medical professionals came together to share their individual stories and make a unified plea to Washington: it’s time to act.

That’s why I’m calling on Congress to pass new nationwide gun safety laws, including raising the age to purchase semi-automatic weapons. We are doing everything in our power to stem the tide of gun violence here in New York but one state cannot solve this problem on its own. Though our hometown has already been torn apart, strong action at the federal level has the power to prevent future tragedies. At this pivotal moment Buffalo – and America – deserves nothing less.”

Everhart concluded by promising support to the East Side community and remembering those killed on May 14. Everhart’s testimony can be viewed at this link.

5 films about gambling that are still trending today » Entertainmentwise

How to write an environmental policy for small businesses