Nathan Cleary delivered a 24-point masterclass as NSW squared the State of Origin series, smashing Queensland 44-12 in a carve-up at Optus Stadium in Perth.

The Blues dominated the field position, with Cleary, who scored twice and laid on two more, consistently able to manipulate the Maroons around the park.

The criticism of his performance in Game 1 had been premature but it clearly riled him, and this was as good a halfback showing as one will see.

“Yes, there was unwarranted criticism after the first game,” Blues captain James Tedesco said of Cleary. “But it shows what a champion player he is. He comes out in game 2 and puts on a clinic with a lot of pressure on him. He is one hell of a player.”

Coach Brad Fittler agreed: “I thought he read the game very well,” he said of Cleary. “He set the try up early with the kick. They were putting a lot of pressure on us with their outside defence, but by the end of the game they were pretty fatigued so he and Jarome (Luai) took advantage.”

He was ably assisted by Tedesco, who buzzed around the middle and ran for close to 200m, and debutant Matt Burton, who scored one, created one and troubled the Queensland back three on several occasions with his boot. 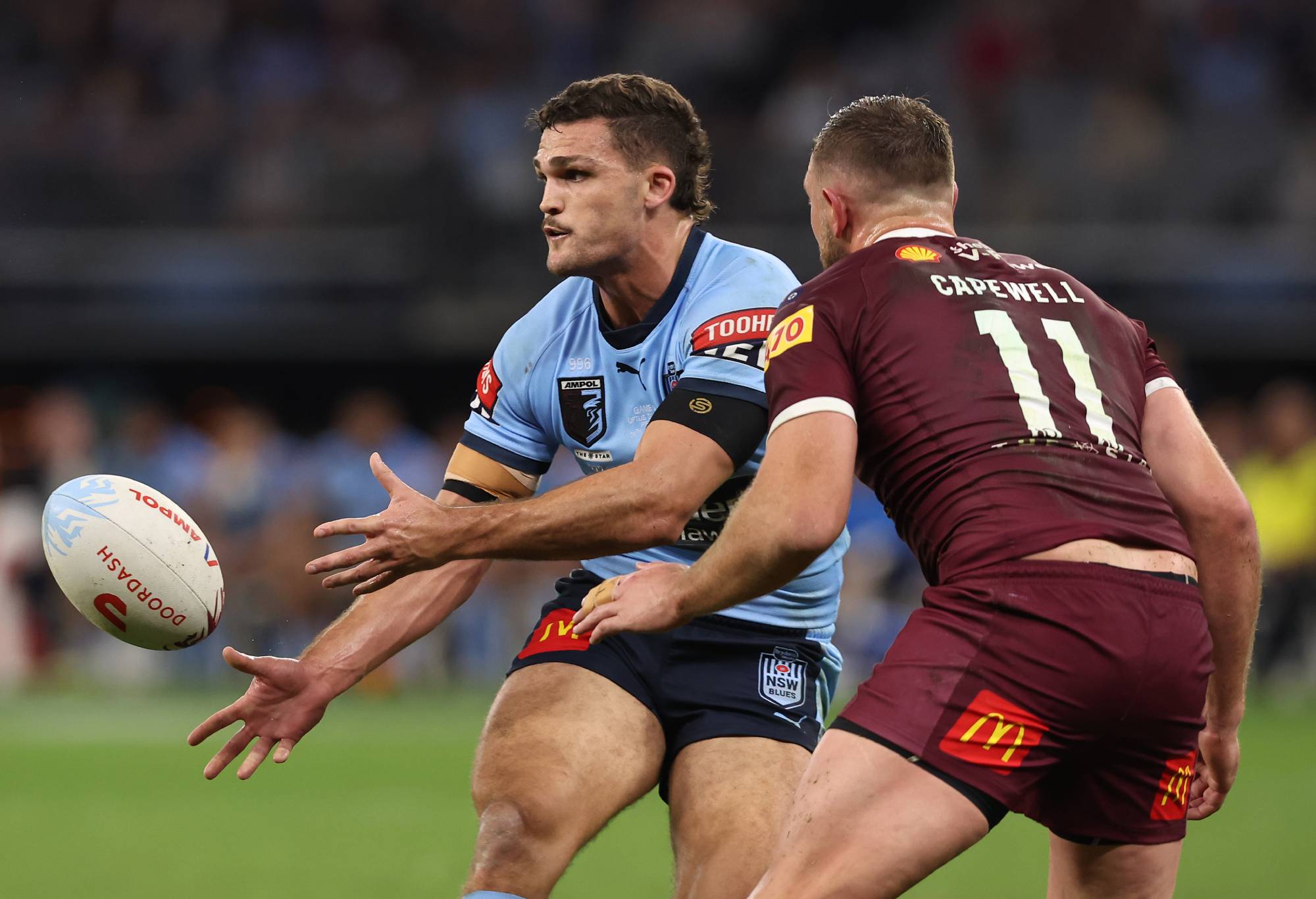 Fittler had rung the changes for Game 2, with seven alterations to the line-up including debuts for Burton and Siosifa Talakai.

“I think the biggest compliment you can get as a coach is that when you make a few changes, they go out and do what they’re supposed to do,” said Fittler

“They all played well. The blokes playing their first game, Sifa (Talakai) and Burto, they were fantastic, but across the board, everyone was working together.

“Outside Nathan, Junior (Paulo) was our next most important player, he made a big difference when he came on. He made some big runs and we scored not long after that.

“To acknowledge they weren’t great and some people lost their position, so we worked hard so that it wasn’t in vain.”

The game turned on a late first half sin-bin for Felise Kaufusi, who was the fall guy after a series of infringements as the Maroons held on for dear life on their try line with the break imminent.

The Queenslanders were angered by referee Ashley Klein’s decision, but there had been four penalties in four minutes and the further action was more than justified. 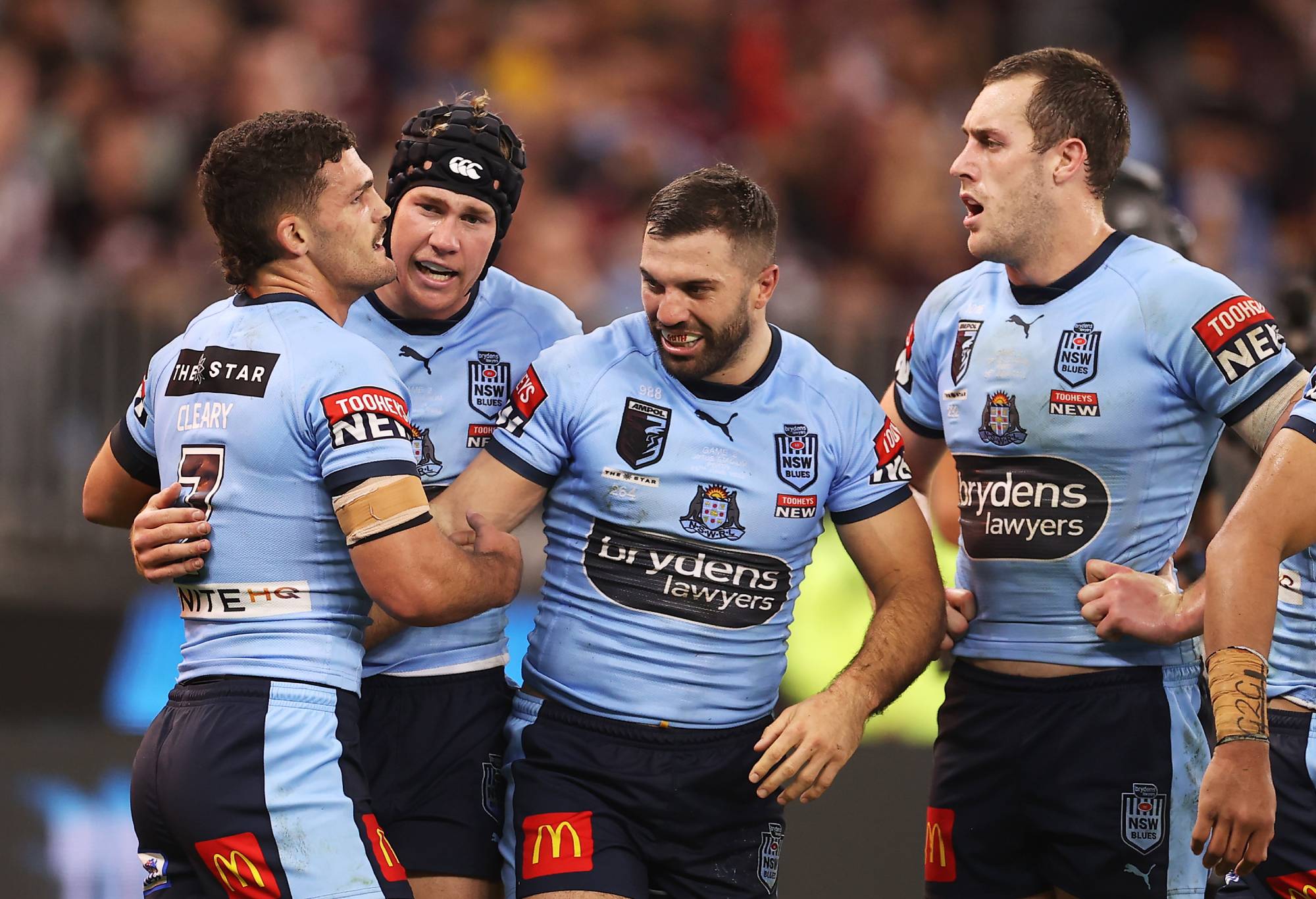 Brian To’o scored seconds later and the level of effort that the Maroons had to expend in that 10 minutes caught up with them in the end.

From there on out, it unravelled. The last four tries were the result of unforgivably weak tackling at this level, though given that Queensland made almost 100 extra tackles over the course of the 80 minutes, perhaps that was to be expected.

Maroons coach Billy Slater refused to comment on the refereeing and instead questioned the errors that crept into Queensland’s game.

“I’ll have to go look at the penalties individually, but that’s the referee’s job, they’ll review their own game and I have my job to think about. We won’t use that as an excuse,” he said.

“There’s a bit to change. There’s good stuff to take out of tonight. The boys were brave for the first 50 minutes and things snowballed against us. We contributed to it.

“That first 50 minutes was a good contest, but then NSW started playing with a bit more energy than us and some concentration things crept into our game and we compounded that. That’s where it was decided. “I don’t think they threw the towel in.  It was more concentration than complacency. We lacked a little bit of concentration. It wasn’t any one player, it was across the board and there were a lot of things and that helped NSW gain energy.

“Fatigue is a part of the game, and when you go down to 12 men, you’ll get more fatigued.”

Fittler had been unhappy with the officiating in Game 1, particularly regarding ruck speed, but backed Ashley Klein’s performance in Perth.

“They pushed the ref and he allowed it, but it was a criticism of us more than anyone else,” he said of Game 1. “I thought they were a lot better tonight.

“We were starting to get the better of them and the only way they were keeping up was by giving away penalties. I thought it (the sin bin) was warranted.”

NSW saw several of the same problems from Game 1 re-emerge in the early stages, but solved them as the match wore on.

The edge defence of the Maroons had been exceptional in Sydney, with Dane Gagai, Cameron Munster and Valentine Holmes able to rush out of the line and force the Blues back inside.

The Blues had done their diligence, however, and when presented with the chance to kick behind, they did with great effect for their opening try.

With the defensive press unable to function, their wingers were able to make hay: both To’o and Daniel Tupou scored from the sort of opportunities that simply never came in Game 1.

The grind was intense early on, with neither side able to gain any real advantage. Queensland came closest, but Selwyn Cobbo was bundled into touch by To’o at the corner.

The Blues did take the lead, after a ball-strip gave Cleary the chance to take the two, but were struggling to get into territory thanks to the Maroons’ policy of kicking early in the tackle count.

When NSW did get the chance to attack, their last tackle was often poor: at one point, Isaah Yeo ended up kicking and on another occasion, Tedesco was caught tamely on the last.

Cobbo continued to threaten on the right edge, but spurned a golden chance after To’o misread a kick. The winger could only bounce the football as it trickled towards the dead ball line.

In the 22th minutes, the damn finally broke. After being helped into position by a Jake Trbojevic penalty, Queensland got a quick play the ball and spread towards the right again, with Kaufusi able to get outside Jarome Luai and score the first try.

There were complaints from the Blues about a forward pass, but Klein wasn’t interested.

Having watched enough of Gagai shooting the line to block their left edge, Cleary caught him in no man’s land with a kick in behind that Burton was able to gather and score.

Suddenly the game was purring along. The edge defence of the Blues was again questionable, with Ponga allowed to skirt around Stephen Crichton and dump inside for Holmes, who put Munster under the posts for an excellent Origin try.

After a Cobbo error gave them field position, NSW put together 18 tackles’ worth of good ball play, aided by a series of set restarts and penalties. Klein eventually lost patience and binned the last culprit, Kaufusi, and within seconds, To’o crossed in the corner after excellent catch-pass work from Burton. Cleary sent the conversion over form the touchline to give NSW a 14-12 half-time lead. 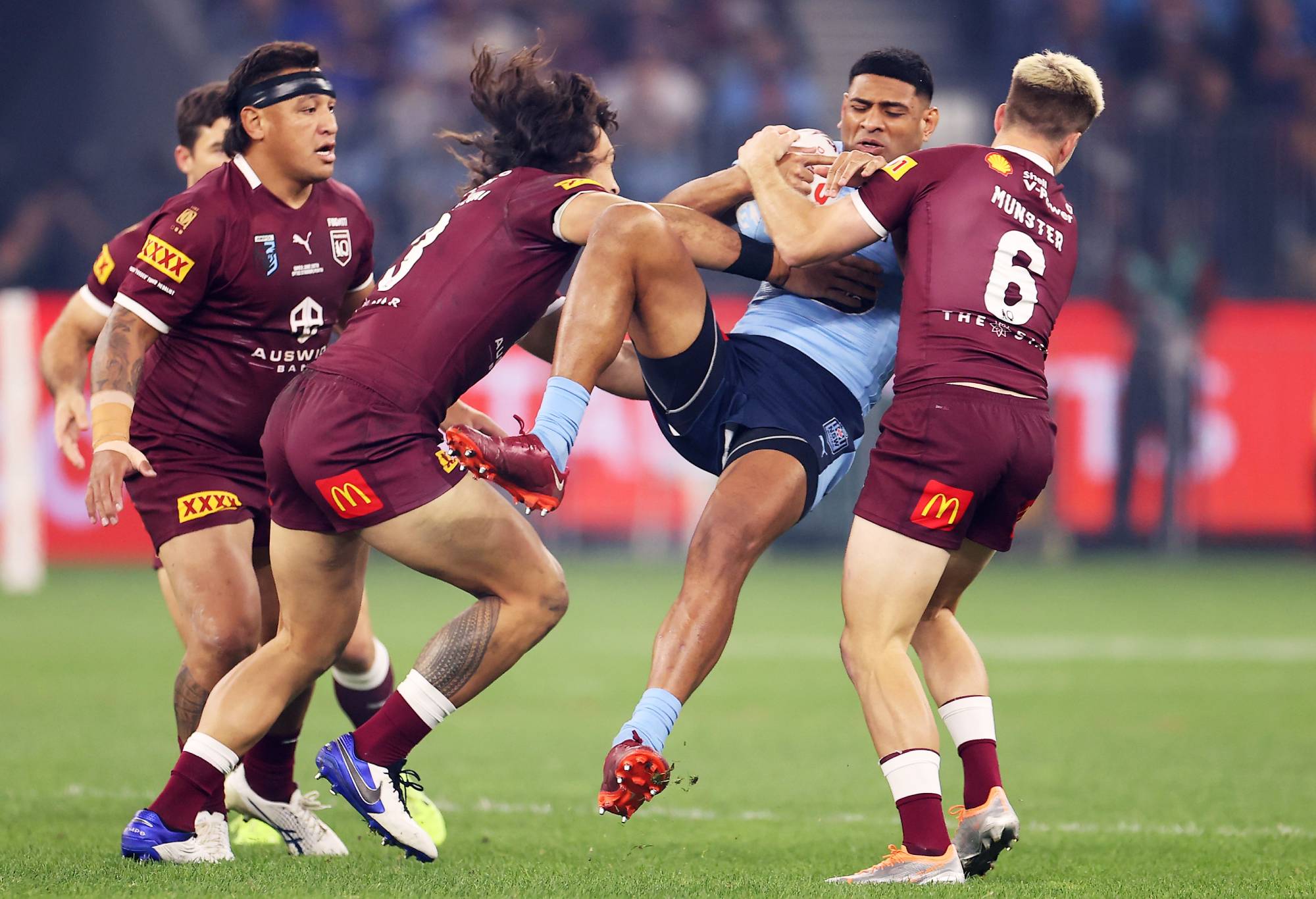 Taulagi was nowhere near a trademark Burton spiral bomb, but was able to regather before a Blue could get to the ball.

The debutant would be less successful the second time. After dropping a Cleary kick, Taulagi was caught under the ball by the Penrith halfback to allow Tupou in for another try.

The weight of pressure told: Luai took a ball under no pressure but ran straight through Jeremiah Nanai with minimal effort to score.

After Burton had stolen the ball from Gagai on the first tackle, Cleary stepped back against the slide, Ponga and Ben Hunt lost their feet and presented a clear path to the line.

The path got clearer still. This time on the right, Hunt fell for a Cleary dummy and the halfback was in again for an even softer score.

There was time yet for Angus Crichton to grab another, bringing up the possibility of a 50-point scoreline, and while that was averted, the win was more than secured. The Blues will go to Brisbane as favourites on the back of this showing.

“We came with the mentality of win or die tonight,” said Jarome Luai. “It was an intense week. Every day, the boys came in and ripped in. That’s the mentality we need to keep in every camp.”

REACTION: ‘Sucked the juice out of Queensland’