The nationwide average price of a gallon of gas this morning is $3.99, according to AAA. Twenty-six states have average prices under the $4 line, including all of the South. The cheapest gas is found in Texas, where prices average $3.49.

The reason? Lack of demand.

AAA explains, “Despite steadily falling gas prices during the peak of the summer driving season, fewer drivers fueled up last week. It’s another sign that, for now, Americans are changing their driving habits to cope with higher pump prices.”

Prices hit their lowest level since early March, in the early days of Russia’s unprovoked invasion of Ukraine.

Prices appear to have peaked in early June when the nationwide average hit $5.02/gallon.

Low Prices Haven’t Sent Us Back on the Road

Some analysts had predicted that lower prices could tempt Americans back on the road. If that’s going to happen, it hasn’t started yet.

In a recent survey, AAA found that “almost two-thirds of U.S. adults have changed their driving habits or lifestyle since March.”

High prices have also changed the way Americans shop for cars. Our research shows that interest in sedans has risen, though SUVs are still outselling cars and trucks combined.

Some Analysts Say This Dip Could End Soon

But some experts say the dip could be short-lived. The New York Times reports, “There are several reasons that prices could rise again: The course of the war could further hamper global oil supplies, energy investors’ views on the economy could change,” and the advance of hurricane season could lower Gulf Coast refining capacity. 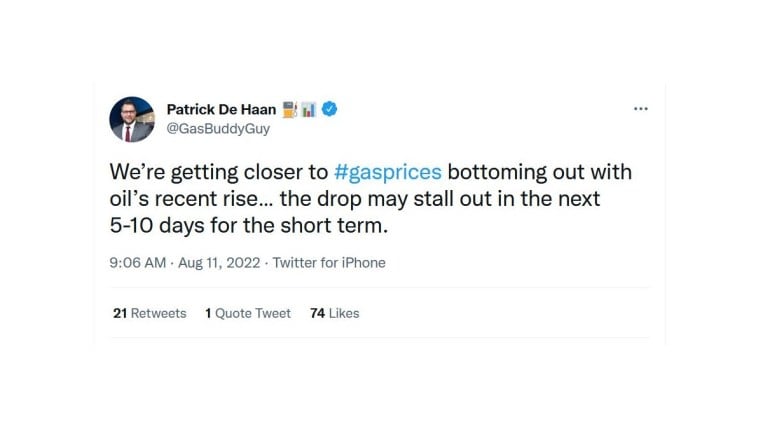 Patrick De Haan, head of petroleum analysis for GasBuddy, tweeted a prediction this morning that “the drop may stall out in the next 5-10 days for the short term.”

When Does an Airline Have to Pay for a Delayed or Canceled Flight?