Carlton captain Patrick Cripps’ stunning escape at the AFL Appeals Board for his original two-match suspension has swiftly caused controversy around the footy world.

Cripps was originally banned for two weeks for his collision with Brisbane’s Callum Ah Chee, during the Blues’ loss on Sunday.

However, despite an unsuccessful initial appeal at the AFL Tribunal, a second challenge by the club was successful after a marathon four-and-a-half hour hearing.

Speaking on SEN Breakfast, former player David King, who has long advocated for the AFL to bring in harsher measures to protect players from head high contact, slammed the overturn, saying the game has ‘never been more lost’.

“It contradicts everything that we’ve been talking about for the last three to four years about protecting the head,” King said.

“We’ve never been more lost than what we are right now.

“Can we just make a decision to whether we are protecting the head or we’re not, and then work with that?

“Because I think we’re mixing and matching and waiting in the middle ground and not really raking a stance either way.

“Don’t tell us one thing at the start of the season and then four months later be completely at odds with that because we’ve got two weeks to go before a finals series and the captain of Carlton has been rubbed out.

“That’s just not the time to make these adjustments. Put your head up, come and tell us what’s going on with our game, because right now it’s a mess.

“The game itself, the way it’s played is fantastic. Clubs are putting on a great spectacle and show, but the rules and protecting the head are miles away from where they should be.”

King was also critical of AFL counsel Nicholas Pane, whose failed argument that Cripps was contesting the ball at the same time as laying a bump was a key reason behind the Appeals Board’s overrule.

“I was staggered by the AFL counsel Nicholas Pane last night,” King said.

“He said he was adamant a player could contest the ball whilst watching with eyes on the ball and still maintain the action of bumping an opponent – I think they’re two different things.

“You’re either contesting the ball or you’re bracing or bumping. They’re not the same. It’s very, very rare that you can contest for the ball and put a bump on at the same time because your arms tell you what you’re doing – are you bracing, are you ready for contact, or are you reaching for the ball?

King went on to urge AFL general manager of football Brad Scott to speak publicly and confirm the game’s stance on protecting the head, with the Cripps decision the latest in a number of inconsistent adjudications in 2022 and prior years.

“To have a case flipped on legalities highlights the nightmare the AFL have had with all these things,” he said

“Throw ducking and lowering your height [when tackled] in that as well. That’s bounced around all year.

“At the start of the year we were talking the stand rule and dissent. We’ve watered down everything over the next 20 weeks.

“Why don’t we hear from Brad Scott and those in charge at the AFL about protecting the head? Why don’t they put their head up and talk to us, the fans?

“Why don’t they? Because they’re worried about the legalities down the track.”

“We need to know what the AFL’s response is to this decision… he [Cripps] had the opportunity to go for the footy, he elected to bump, the guy has been concussed, we would all agree mostly that that’s two weeks,” Cornes said.

“That was the way I saw it and that’s from someone who’s been more lenient than you. I was shocked when I saw that he got off.”

Cripps is now free to play in the Blues’ two must-win games against Melbourne and Collingwood, needing to win one of those to secure a first finals berth since 2013. 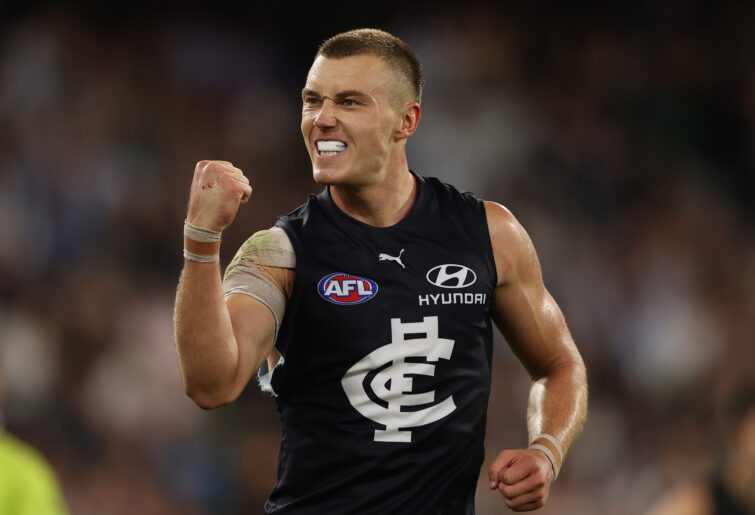 The Roos have recalled midfielder Ben Cunnington for an inspirational AFL comeback after a 12-month cancer battle, but the decision to leave South Australian-born Horne-Francis out in his stead, denying him the chance to play in front of family and friends, has caused a stir.

Speaking on Fox Footy’s AFL 360 Extra, Riewoldt could not comprehend the move.

“There’s two games to go in the year, I would think you’re trying to get games into these guys, to expose them as much as you possibly can, give a potential coach like Alastair Clarkson a look at the young players,” the St Kilda legend said.

“The game’s in Adelaide – that’s where all his family and friends [are]. He was desperate to get back there earlier in the year, which created some issue.

“I’m really surprised to not see him out there, unless there’s some reason for him not.”

Horne-Francis’ omission quickly led to half-serious conspiracy theories on social media that the Roos were concerned the young star, who has been linked to a move back home to SA for months, would be further prompted to seek a trade were he to play.

Koch confirms Hinkley will remain for 2023 after turbulent week

Port Adelaide chairman David Koch has declared that under-fire coach Ken Hinkley will remain at the Power for the 2023 season, despite a week of hints that he would be forced to head elsewhere.

Koch took to 7 News Adelaide on Thursday night to confirm the club would stick fat with Hinkley, who has been at the helm since the start of 2013.

“Obviously, for all of us, this season has been a major disappointment… as we always do, we’ll thoroughly assess our football program at season’s end,” Koch said.

“But, as the club has maintained all year, Ken Hinkley is contracted and will be our coach in 2023.

“Prior to this season, Ken led us to two consecutive preliminary finals. Some will argue we should make a change based on our performance this season alone and that Ken has never taken the team to a grand final.

“But we base decisions on all the information in front of us. We believe Ken gives us the best chance of successfully rebounding next season, of successfully attracting new talent and football department resources to make us better.”

Koch’s backing of Hinkley comes despite claiming earlier in the week the Power were ‘not afraid to make change’, with his quote ‘turn it around or watch out’ sparking intense speculation.

“Ken Hinkley must get to the end of the week and think: ‘What did I just go and endure – and for what?’” Riewoldt wondered.

“’Kochie’ comes out on Monday saying what he said, after the CEO, the footy manager, everyone else in the club has been on the same page – and then we get to five days later, and he backflips on the statement?

“He could have said on Monday what he said tonight [Thursday night], but he chose not to. And by omission, he put Ken Hinkley under ridiculous, undue pressure this week.

“It was really poor… I think Ken’s probably got a reasonable tolerance for it now after all this time, but I’d be scratching my head.”

The Power will miss the finals in 2022, having been one of the premiership favourites heading in following consecutive top-two finishes and preliminary final exits in 2020 and 2021.