NRL NEWS: Trim Latrell out of Origin, Gus says Blues ‘too Pantherised’, Cleary back after ICU trip for blood clots

Latrell Mitchell is back at South Sydney training looking fit and firing after his return from an American training camp was delayed by a bout of COVID.

The star fullback has shed at least five kilograms from his bulky frame after his trip to the US where he worked with renowned “reconditioning specialist” Bill Knowles.

Mitchell, who has not played for more than two months due to a hamstring tear, will not play for the Bunnies on Thursday night against the Dragons and the club does not want him to be selected for NSW in Origin II next Sunday.

It is likely his first match since Round 5 against the Dragons will be the July 2 clash with Parramatta at Accor Stadium.

Mitchell was on light duties at training at Redfern on Monday but looked like he is now in great shape after his stint on the sidelines.

South Sydney centre Campbell Graham insisted Mitchell could easily make his comeback from injury in State of Origin if the Rabbitohs change their tune on the club’s marquee man.

Mitchell would be a walk-up start for NSW if available, particularly given the way the Blues missed his spark in their Game I loss in Sydney last week.

And Graham has no doubt Mitchell could still add that in Perth for NSW, even if he was to come in without an NRL game under his belt. 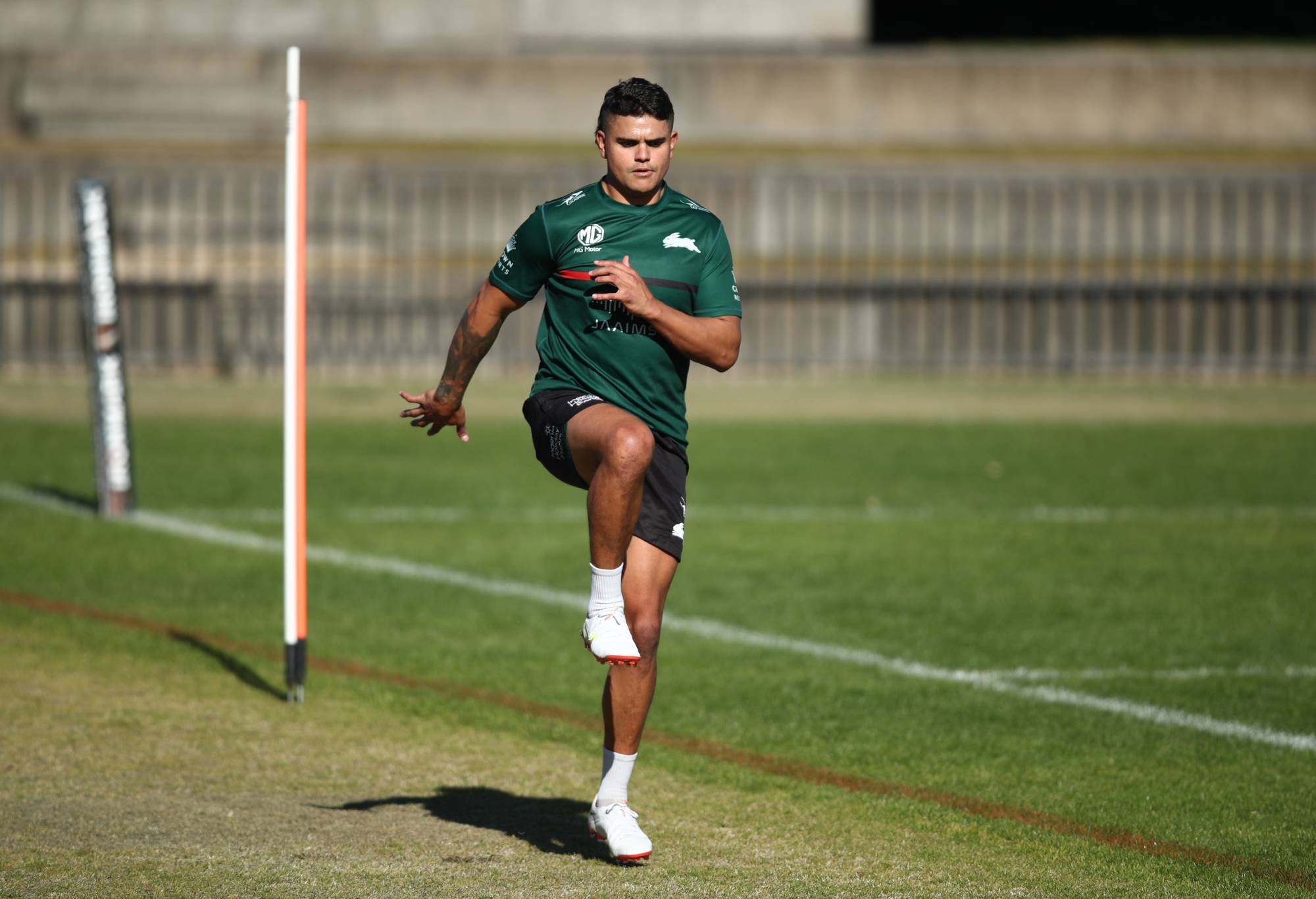 “I think he could. Obviously Origin is intense, but Latrell has been training hard,” Graham said.

“I know he hasn’t been playing footy for the last month and a bit but he delivers in big games.

“I am sure Latrell would step up and take that on.”

Graham also indicated he believed Mitchell should be granted some say on whether he is available for NSW, in consultation with Souths medical staff.

“That is a decision Latrell will have to make,” Graham said.  “I wouldn’t think twice, he would get to represent his state which is unreal.

“Obviously we would want to have him back in a Rabbitohs jersey soon, so he would have to talk to coaches about that.”

Complicating the matter further for Blues coach Brad Fittler is the fact Souths trainer Travis Touma is on his staff, acting in the same role for the Blues.

If Mitchell makes his return against Parramatta, it will give him one match before potentially playing in Origin III for the Blues.

Meanwhile, if NSW do make changes in the centres, Graham could be the man to benefit if Mitchell is not made available.

The centre continues to have the backing of Souths teammates for the role, with Queensland fringe forward Jai Arrow insistent NSW selectors should forget MItchell for Perth and go with Graham.

“I feel like I am ready to play rep footy. If that call comes, it comes,” Graham said.

Gus tells Blues not to panic

Former NSW coach Phil Gould believes Brad Fittler needs to live up to his chilled persona and not jump at shadows in the lead-up to naming his team for Origin II.

“What we need to do is get to the medical next Sunday afternoon and see who’s available.

“No.2: we weren’t belted. We were only just beaten. We just need a couple of little changes to our mentality and the style of football that we were playing.

“Right at the moment, I wouldn’t be looking for a change.”

Gould believes NSW were “a little too Pantherised” and said the club combination of Nathan Cleary, Isaiah Yeo and Jarome Luai was too dominant with Damien Cook and James Tedesco not getting enough of a chance to make an impact.

“You can’t just bring your club mentality and your club football into Origin and expect that the opposition won’t be ready for it,” he said.

“I think NSW can be a lot better in game two. The losing team learns a lot about Origin, it’s up to Queensland now – what can they learn by winning. Can they improve a little bit more to make the task even harder for NSW.”

Cleary back at training after ICU trip

Panthers coach Ivan Cleary is due back at training on Tuesday after he was admitted to the Intensive Care Unit due to blood clots in his legs.

Channel 9 reported that Cleary had complications following recent knee surgery and the reason why he was unable to coach the team in Newcastle on Sunday was that he had to receive treatment in hospital.

Penrith assistant Cameron Ciraldo, who toured the Wests Tigers’ facilities at Concord on Monday as he edges closer to signing with the club for 2023 and beyond, took over from Cleary and the team proceeded to trounce the Knights 42-6.

Cleary has missed three of Penrith’s 13 matches this season due to problems with his knee.

The premiers are four points clear at the top of the ladder with a 13-1 record.

They will be raging hot favourites to account for the woeful Warriors at Redcliffe on Saturday before the majority of their NRL side will be called into Origin and international duty during next week’s Representative Round.