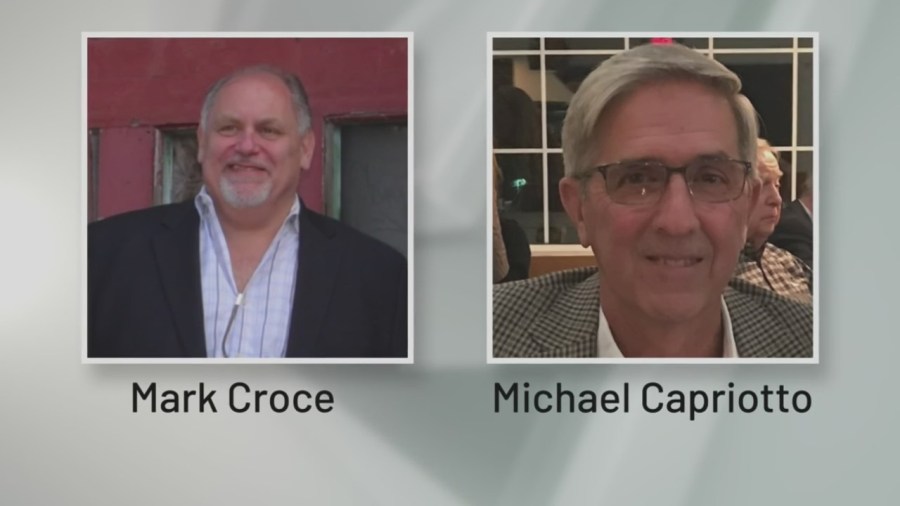 The federal agency that investigates aircraft accidents released its final report Tuesday on the January 2020 helicopter crash that killed local businessmen Mark Croce and his friend, Michael Capriotto, concluding the probable cause was a severe left roll that resulted in the main rotor blade hitting the frame, which caused the helicopter to fall apart in midair.

In fact, the National Transportation Safety Board’s final report states the helicopter turned upside down after hitting moderate-to-severe turbulence at a low altitude, which a flight expert said is very dangerous scenario to be in while piloting a helicopter.

But the report did not explain why the auto-pilot failed to guide the helicopter through the rough winds or why Croce was unable to bypass it and control the helicopter himself.

The NTSB report presents three potential reasons why the helicopter would have inverted and broke apart but it does not conclusively know what exactly happened, in part because the helicopter lacked an on-board crash-resistant cockpit imaging system that would have recorded what Croce did and did not do.

The accident happened at about 8:30 p.m. on Jan. 9 near Mechanicsburg, Pennsylvania, where pieces of the helicopter landed in the backyard of a home in a residential area.

The NTSB report states that metabolite of the anti-seizure and anti-anxiety prescription medicine Klonopin, also known as clonazepam, was found in Croce’s liver and muscle, but the drug itself was not.

The report states that toxicology test also detected ethanol in Croce’s liver and muscle, which is the intoxicating alcohol found in beer and liquor, but the NTSB cautioned that the chemical can be produced after death.

Bob Miller, who was Croce’s flight instructor and longtime friend, said Croce was not a drinker, and Miller had no prior knowledge of any Klonopin use.

The NTSB report stated: “The possibility of an impairing or incapacitating medical event or impairing effects from the pilot’s use of clonazepam (alone or in combination with ethanol effects) could not be determined from the available evidence. However, no operational evidence indicated that the pilot’s performance was deficient during the flight time preceding the oscillations.”

The NTSB report states that the auto-pilot may have reacted poorly to the moderate-to-severe turbulence that was reported in the area. Additionally, the helicopter’s extreme movement could have been caused by Croce “manually manipulating the cyclic control” which is used to move the helicopter in any direction while in flight.

“While any of these scenarios might have precipitated the initial oscillations, none would have precluded the pilot from overriding the autopilot and manually flying the helicopter,” the NTSB report states.

Miller said Croce came upon “sudden turbulence” at low altitudes, “and it sounds like the auto-pilot went haywire.”

“I cannot overstate the seriousness of low-level wind shear,” Miller said. “It is so sudden; it will bring down a large airliner — in fact, it has.”

The NTSB report also stated that, “no operational evidence indicated that the pilot’s performance was deficient during the flight time preceding the oscillations.”

“This is going to fall into that unfortunately 10% where we don’t really know what happened,” Miller said.

The NTSB also noted that the lack of an on-board crash-resistant cockpit imaging system “precluded a determination of the pilot’s actions, or lack of actions, in response to the pitch and roll oscillations.”

About six months after this accident, the NTSB issued a safety recommendation to international and domestic helicopter manufacturers that requested they install crash-resistant flight recorders with cockpit imaging systems for all existing helicopters.

“The helicopter manufacturer responded that it incorporated a cockpit camera system as standard equipment on all similar model helicopters manufactured beginning the year after the accident and offered as a kit for existing helicopters the same year,” the NTSB final report states. “The cameras were not designed to be crash-resistant.”

The Croce family is suing Robinson, the manufacturer of the helicopter. The lawsuit filed in Los Angeles County Superior Court alleges that design defects and company negligence caused the crash. Robinson has denied the allegation.

Croce, 58, was a longtime and well-known developer. He owned a number of local businesses, such as Buffalo Chophouse, the Curtiss Hotel, Statler City and the building that houses Dinosaur BBQ. Capriotto, 63, also owned a number of businesses, including the Kwik Fill in Orchard Park, where his son has served as a cashier for many years.

On Jan. 9, 2020, Croce and Capriotto were on a nighttime flight in the Robinson R66. They departed an airport in Baltimore, Maryland, for a flight to Buffalo Niagara International Airport.

By 8:29 p.m., radar contact with the helicopter was lost. The controller never got a response from Croce when he tried to make contact. The helicopter never sent out a distress call.

A witness, who was outside at the time, reported hearing and seeing a low-flying helicopter that was “struggling to fly.” The witness also reported hearing a high-pitched noise that sounded as if the rotor was having trouble turning, and then she heard a “loud boom” and saw a “flash of light.”

Another witness reported hearing a “thumping” sound and then a “loud bang,” which shook his house, the NTSB report states. The witness also had a doorbell video camera that recorded portions of the audio and video of the helicopter prior to the accident, which the NTSB reviewed.

The NTSB report states that while Croce was diagnosed with sleep apnea and coronary artery disease, he did not have “any typical symptoms of related heart pain or congestive heart failure.” Croce’s most recent visit to his primary care doctor showed he was successfully treating his sleep apnea and “had no cardiovascular symptoms.”

The NTSB report states that Croce attended a safety course in February 2019 for this specific helicopter and the instructor indicated that Croce had “very good control” of the helicopter when performing normal and emergency procedures.

“He is a precise pilot,” said Miller, Croce’s flight instructor. “His skill level was superb.”

Croce’s helicopter was manufactured in January 2019 and he bought it shortly after it was built, the report states. At the time of the accident, the hour meter showed 167 hours.

While the helicopter’s autopilot system is supposed to records faults in the system, the NTSB said the downloaded data were unrecognizable by the manufacturer. Therefore, they were unable to obtain accident-related data.

Miller said the reports leaves open the big question of why Croce was unable to override the auto-pilot to control the helicopter himself. Or maybe he tried and it failed to switch out?

“The report leaves it vague,” Miller said. “Mark may not have even had time to disengage the autopilot before the helicopter inverted. Once it’s inverted at that low altitude, there’s no way that you can save the day.”

What Is the Difference Between a Fire Door and a Normal Door?