Puppy left for dead in Niagara Falls rescued by police 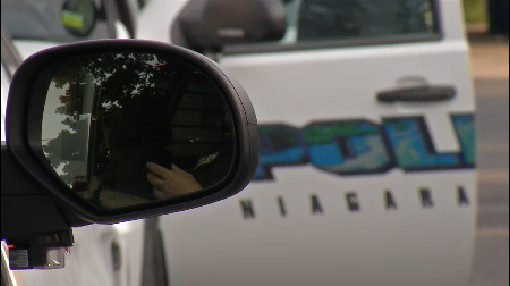 NIAGARA FALLS, N.Y. (WIVB) — An animal cruelty investigation has been opened after a puppy was found left for dead near the Target on Niagara Falls Boulevard, the Niagara Falls Police Department (NFPD) said.

Niagara Falls police responded to two separate calls for a dog tied to a shopping cart without food, water or shelter in a wooded area between Target and Dunn Tire, according to an NFPD police report.

Officers were unable to find the dog the first time they were dispatched but heard a loud bark and whining when investigating the second call. 100 yards north of the parking lot, officers found an emaciated lab-mix puppy with a chain leash tangled around a shopping cart, they said.

As police got closer to the unsteady puppy, it tried to hide and tipped the shopping cart. Officers relieved the pressure on the puppy’s neck and used a catchpole to secure the animal. The pup was given food and water and was transported to the SPCA for treatment.

There’s no word on if any arrests have been made. However, three counts of animal cruelty were applied to the case.

Wills vs. Trusts – What’s the Difference?